In a pandemic-wracked year, religious leaders and spiritual counselors across the U.S. ministered to the ill, fed the hungry, consoled the bereaved. Some did so while recovering from COVID-19 themselves or mourning the loss of their own family members and friends.

At times, they despaired. So many people got sick, so many died, and these faith leaders couldn’t hug the ailing and the grieving, or hold their hands.

For safety’s sake, their congregations were kept away from in-person services for months, but the need to minister to them only intensified. 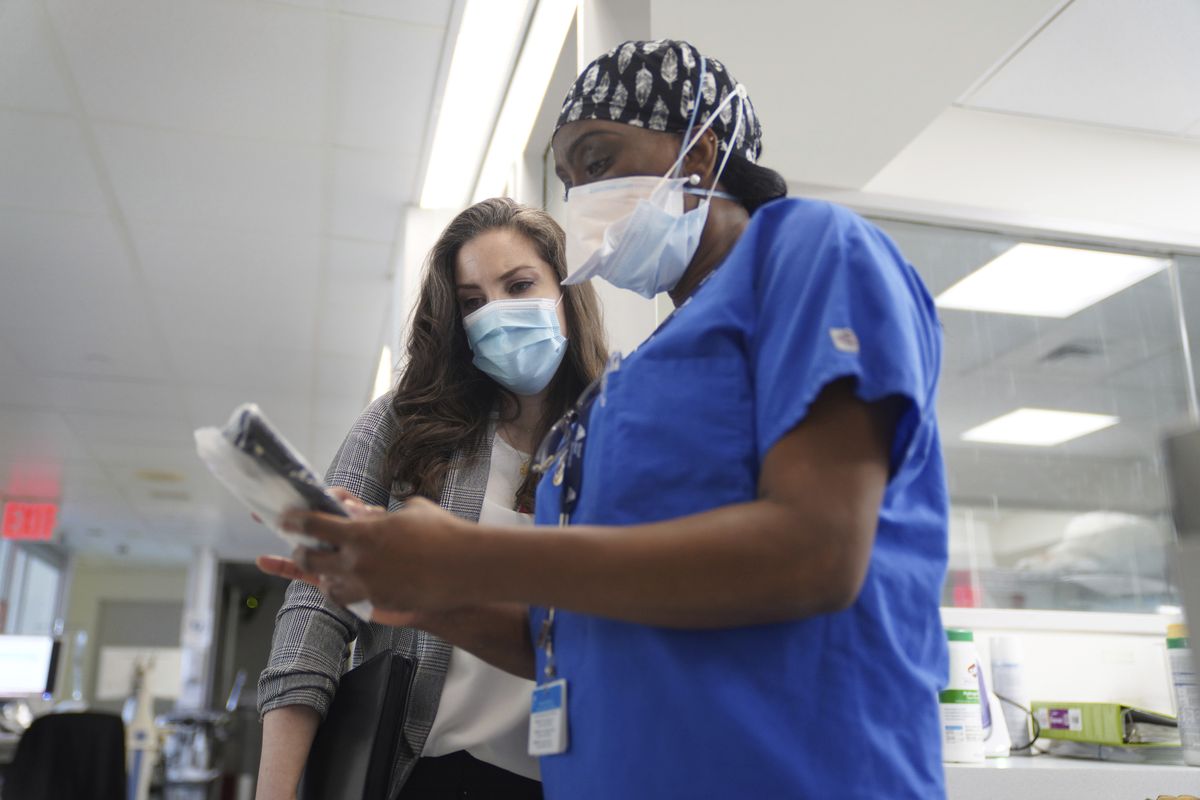 Amid the grief and anxiety, these faith leaders showed resilience and found reasons for hope as they re-imagined their mission. Here are some of their reflections on a trying year.

In the early weeks of the pandemic, the Rev. Joseph Dutan lost his father to the coronavirus. Days earlier Dutan’s mentor and friend, 49-year-old Jorge Ortiz-Garay, had become the first Roman Catholic priest in the U.S. to die from COVID-19.

Dutan felt grief, fear, even doubt. He mourned his father while consoling the community of St. Brigid, a Catholic church in an area straddling Brooklyn and Queens that had among the highest infection rates in New York City. His grief, he said, made him better able to help others enduring similar pain.

“When they come in for a funeral Mass of a loved one … I feel I can relate to them, I can cry with them,” Dutan said. “I comfort them and tell them: ‘Things are going to be all right. We’re not alone; we’re in this together.’ ”

In the San Fernando Valley area of Los Angeles, Rabbi Noah Farkas said the pandemic’s toll has been particularly severe among the many older adults in his Valley Beth Shalom congregation.

He estimated that 25 to 50 of its roughly 5,000 members lost their lives to COVID-19 – and even more died, predominantly older congregants, “because COVID created a life situation that was untenable.”

Many were isolated in their rooms at assisted-care facilities, he said. “There was suicide, drug addiction, exhaustion – all the things you can think of when mental health deteriorates.”

Farkas conducted 20 funerals in January alone, as California was hit by a wave of infections, always wearing a mask and sometimes a face shield. He was saddened by the inability to hug mourners.

Among the hardest-hit churches has been Saint Peter’s Lutheran Church in New York City. Its leaders say more than 60 members of the congregation of about 800 have died of COVID-19. Almost all were part of the community of some 400 who attended services in Spanish.

Bishop Paul Egensteiner, who oversees Saint Peter’s and other New York City-area congregations of the Evangelical Lutheran Church in America, said the emotional toll on pastors has been heavy.

Imam Ahmed Ali of IQRA Masjid Community & Tradition, a mosque and community center in Brooklyn, sprang into action in late March after a funeral home called asking for his help to retrieve from hospitals the bodies of people who died of COVID-19 and give them burial rites. Ali was scared of the fast-spreading virus, like others, but he felt a calling to serve God and his religious duty.

He began putting in volunteer shifts of up to 20 hours transporting bodies, putting them in freezers in the funeral home, washing and enshrouding them in white cloth and taking them to cemeteries for burial.

Typically he performs the janazah, or funeral, prayer only a few times a year. At the height of the crisis in New York City, he was doing as many as 20 in a single day, and over about three months, he oversaw or took part in nearly 300 burials in all.

“It was a really challenging time, and it was a great loss for every community,” Ali said. “I pray that we don’t have to see that kind of pandemic again.”

Friendswood United Methodist Church, in the suburbs of Houston, has been spared a heavy death toll.

But one active member of the 900-strong congregation who did die of COVID-19 was “a pillar of the church” who served on many of its boards and committees and won friends for his good humor and generosity, said Jim Bass, the pastor.

“He was 74 but no underlying health conditions that we knew of,” Bass said. “When he became sick, for us in the congregation it really hit home.”

Farkas and his team also launched what they called a “war on isolation,” including a new over-the-phone buddy system to connect isolated people starved of human contact. Volunteers selected congregation members whom they called at least once a week, and friendships sprang up between 20-somethings and octogenarians.

With no in-person worship, Farkas encouraged community events respecting health guidelines. For the recent Purim holiday, the congregation staged a drive-through carnival in the parking lot with about 160 families taking part.

“We’ve learned a bunch,” Farkas said, “but if I had to pick one thing, it’s that we didn’t give up.”

Friendswood Methodist spent more than $20,000 on video equipment last year to provide online worship. In-person services have now resumed, with a quarter of pre-pandemic attendance. Bass said there’s enough room in the 1,100-seat sanctuary for adequate social distancing; he encourages worshippers to sing hymns quietly to themselves through their masks.

For Esther Roman, a chaplain at New York’s Mount Sinai Morningside hospital, the pandemic has entailed ministering to one grieving family after another.

She recalled sitting 6 feet from one devastated woman, tears rolling down her masked face as she posed an anguished question to Roman: Why did God let her otherwise healthy, vibrant mother die? The chaplain couldn’t comfort the woman as she would have done prepandemic: by holding and squeezing her hand.

“It was one of those moments that I resent the inability to offer support in the many ways that I used to be able to,” Roman said. “I had to try to have my words do the embracing.”

She and others have had to learn to transmit love or support via digital screens and through face shields and masks.

“We all rose to the challenge,” Roman said. “We were drafted into this war.”

Even as the pandemic was subsiding in New York City in January, Saint Peter’s suffered a new trauma: Severe flood damage from a ruptured municipal water main.

The Midtown Manhattan parish is known for its Jazz Vespers program, and the badly damaged items included treasured musical instruments and archives of several jazz greats. It further complicated plans to resume in-person worship, for which there is still no date set.

Yet the congregation’s president, Christopher Vergara, said the community has grown closer with increased attendance to online services.

“We created a community network so people could check in with others to see how they’re doing,” Vergara said. “We’ve created a lot of small online groups – knitting, history, the arts.”

“The flood was a bad thing, but we’ve really clung to each other,” he added. “We’ve gone from surviving to thriving.”

Friendswood Methodist also was badly damaged by flooding – in its case, when multiple pipes froze and then burst amid the recent severe storm in Texas.

Bass was astounded when more than 50 congregants responded to his emergency appeal for help, hurrying to the unlit church with push brooms and squeegees and working to clear the water.

“We say the church isn’t the building, it’s people. And it is true,” Bass said. “This has really reminded people of the importance of community.”

Christopher Johnson, an assistant pastor of Good Hope Missionary Baptist Church, said his Houston congregation was already suffering from lost social interaction, vanished jobs and food insecurity when it was dealt a new blow in May by the death of his boyhood friend George Floyd at the hands of a white police officer in Minneapolis.

Johnson remembered Floyd as a respected community member who helped host a party at the church with free AIDS testing when Houston hosted the Super Bowl in 2017.

Johnson said Floyd’s death, which sparked nationwide protests and awakening on racial injustice, had a special impact in part because it occurred amid a pandemic wreaking a disproportionate toll on African Americans.

“People had to take a pause, and it is in that pause that we realized that the world had changed,” Johnson said.

Johnson said his church responded to the pandemic by working with local leaders to provide personal protective equipment and COVID-19 testing for the community. They used radio shows to discuss health disparities, vaccinations and the recent lifting of a statewide mask mandate.

The pandemic, Johnson said, “has called us to rethink and re-imagine what our philosophy of ministering really is in the age of COVID.”