The final horn had blown, but the buzzing in Tara Groves’ lap had just begun.

Her husband, Randy Groves, was also being inundated with text messages as confetti rained on two of their children Saturday night in Boise.

Eastern Washington had just dispatched Montana State in the Big Sky Conference Tournament championship game to punch its ticket to March Madness, an effort boosted by the play of Shadle Park graduates Tanner and Jacob Groves.

A bearded, 6-foot-9 talent with the sort of versatility that helped him secure tournament Most Valuable Players honors, Tanner softened with emotion in the celebration as he embraced his 6-foot-8 sibling who’d also made the all-tournament team.

Their parents were just as misty-eyed as they looked down from their Idaho Central Arena seats.

Seeing their two sons – both widely under-recruited before their swift development in Cheney – blossom into major contributors on the same Division I men’s basketball team has been an anomaly . 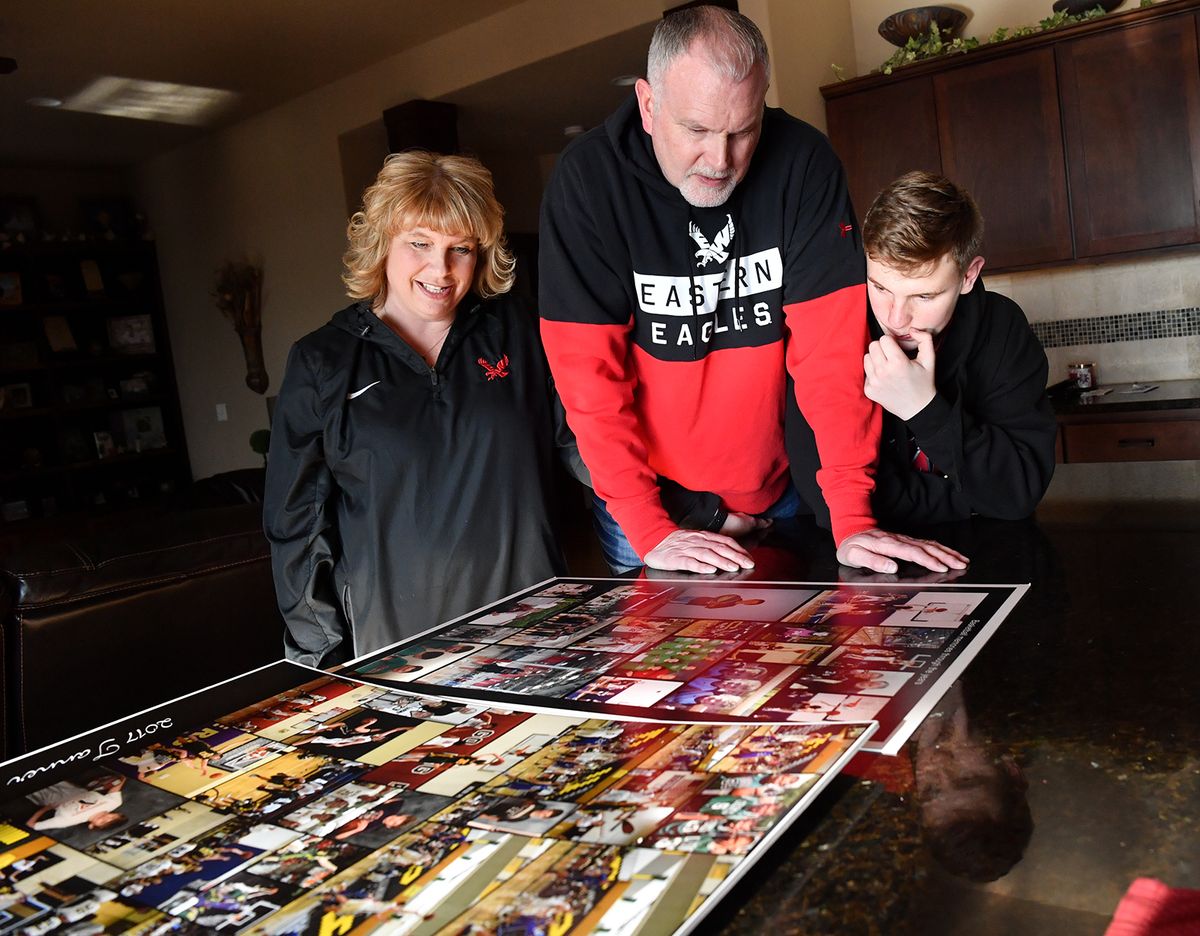 Tara and Randy Groves parents of EWU stars and brothers Jacob and Tanner Groves check out photos of their son’s basketball careers with their younger son Dylynn on Tuesday, March 16, 2021, at their home in Spokane, Wash. (Tyler Tjomsland/THE SPOKESMAN-REVIEW)

Wearing the name Eastern Washington – a school, but also a region their sizable family calls home – magnified the occasion.

When No. 14 seed EWU (16-7) faces third-seeded and national power Kansas (20-8) in the first round of the NCAA Tournament on Saturday in Indianapolis, millions will see the tandem attempt to add another bullet point to their unexpected and meteoric path: an upset of the Jayhawks.

Spokane County and Stevens County will be waving their collective pom-poms.

“We already had the most amazing village that supported the boys, so this is so special” said Tara, a former Colville High School basketball star who still holds Whitworth’s all-time scoring mark. “They’re so invested, friends and family alike.”

Tara teaches physical education and sports medicine at Lewis and Clark High School. Randy, a former Shadle Park standout himself, is the dean of students at Spokane Valley High School.

Fellow educators, students and Indian Trail neighbors have been peppering the proud parents with well-wishes since the Eagles earned the program’s third ticket ever to the Big Dance.

The youngest of their three boys, seventh-grader and another exceptional shooter, Dylynn Groves, has been fielding questions from his fascinated Salk Middle School peers.

“What an unbelievably emotional experience. I really can’t put it into words,” Randy said. “Such a visceral feeling. I’m proud of EWU, and particularly my kids. When you see the pictures and videos of them in all these media outlets, it brings tears to my eyes, because you know the work they put in to get there.”

Randy, a 6-foot-6 former player at Community Colleges of Spokane, gave his father a few proud moments on the hardwood, too.

Jim Groves, who is 6-9, coached and taught at Shadle Park in the 1980s and has relished watching his grandchildren play on such a significant stage.

Jim and his wife watched the Big Sky championship game on Saturday at their Five-Mile home, evoking old coaching tendencies from the 85-year-old from the comfort of his recliner.

“Great box-out!,” Jim said during the televised action. “You have to play through every possession.”

“We’re very happy for the boys, of course,” Jim said. “We like seeing the Groves brothers be at their best.”

The other side of the family is just as engaged.

Tom Flugel, Tara’s father, was a principal and coach in the Colville School District before retirement, where he enjoyed watching several of his relatives have sterling basketball careers in the area.

Tom has watched his grandsons’ games from his Apple TV at his Colville home, where he’s also been caught in the Groves’ NCAA Tournament frenzy.

“A lot of people have been reaching out to me,” said Flugel, who also had a brief football career at EWU. “It’s wonderful. The boys are both very humble and it’s not an ego thing with them.

“They’ve both really developed as players and it’s been a blessing to see the things that are coming to them.”

“Watching Tanner shake the opposing team’s hand as his team was celebrating, and giving a Montana State player a hug,” Randy reflected, “Those are things that are hard to teach.”