A GRIP ON SPORTS • The NCAA basketball tournament is a never-ending series of challenges piled upon challenges, especially this year. Well, the challenges do end, of course. But only if you lose. That’s not what either Gonzaga team wants to have happen today. Nor what the Cougars wanted last night.

• The stretch run wasn’t kind to the Washington State offense. The women found it harder and harder to score consistently in the latter part of the season as teams spent more defensive capital on Charlisse Leger-Walker and other WSU options faded away. 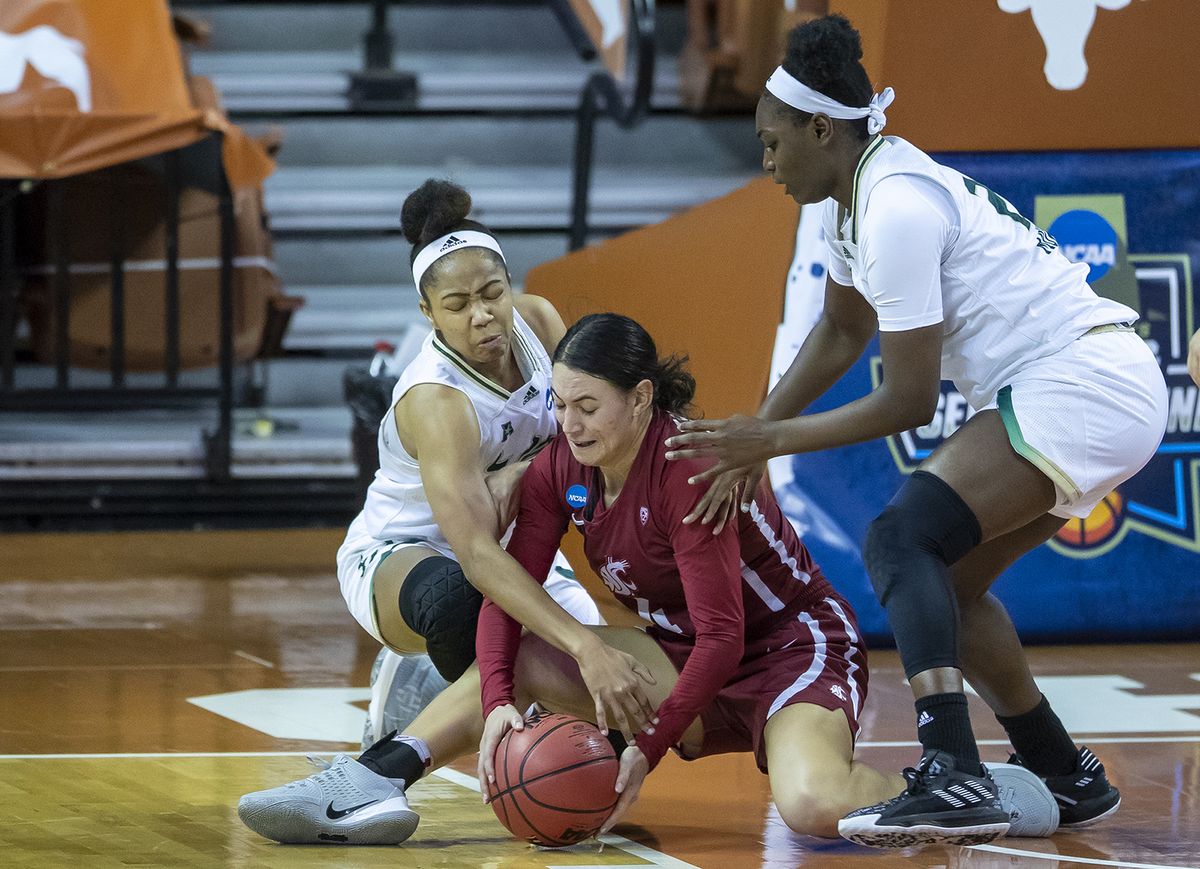 And with the offense sputtering, especially in the final minute against South Florida, the Cougars’ season ending in the first round of the NCAA Tournament against 19th-ranked South Florida, 57-53.

In a season filled with highs – including the school’s first NCAA bid in 31 years – it was not how anyone, from coach Kamie Ethridge to its fans, wanted it to end.

But that’s the finality, and the major challenge, of the tournament. A little bobble here, a poor decision there and the season is over.

That’s new. And that’s a trend that should continue in Pullman, as long as Ethridge (and the Pac-12’s freshman of the year, Leger-Walker) stick around. Of all the challenges athletic director Pat Chun faces, and there are many in Pullman, keeping the former Texas star coaching in the Northwest might be the toughest one over the next few months.

• On this rainy Monday (or snowy, as it actually began doing that while I wrote), Spokane basketball fans turn their eyes in two directions. First, they face Indianapolis, where the Zag men will face their first real challenge of this year’s tournament.

Oklahoma is battle tested, having survived the Big 12 regular season schedule and Missouri in the opening round. The Sooners are well coached – something John Blanchette delves into in his Monday column – and they have nothing to lose.

Gonzaga, on the other hand, has everything on the line after having lost nothing through 27 pandemic-scarred games. Last night we watched Oregon State end Cade Cunningham’s short college career, sending the Oklahoma State freshman off to the NBA draft where he is expected to be a top pick. Now Oklahoma will try to do the same to Jalen Suggs.

If there is one thing I’m sure of, Suggs is up to the challenge today. He played poorly against overmatched Norfolk State. He won’t let that happen twice, not on a national stage, not when the season is actually on the line.

• A different type of challenge awaits the fifth-seed Gonzaga women.

Belmont is the type of 12 seed that always seems poised for an upset. The Bruins are a mid-major champion (remember when the Bulldogs were known as one of those?) with experience, a pesky defense and the ability to put pressure on the opposing guards.

When your eyes switch to Texas (the game is scheduled to tip at 1 p.m. on ESPN2, so there will be some overlap) quickly check on the Zag turnover numbers. They should tell the tale. 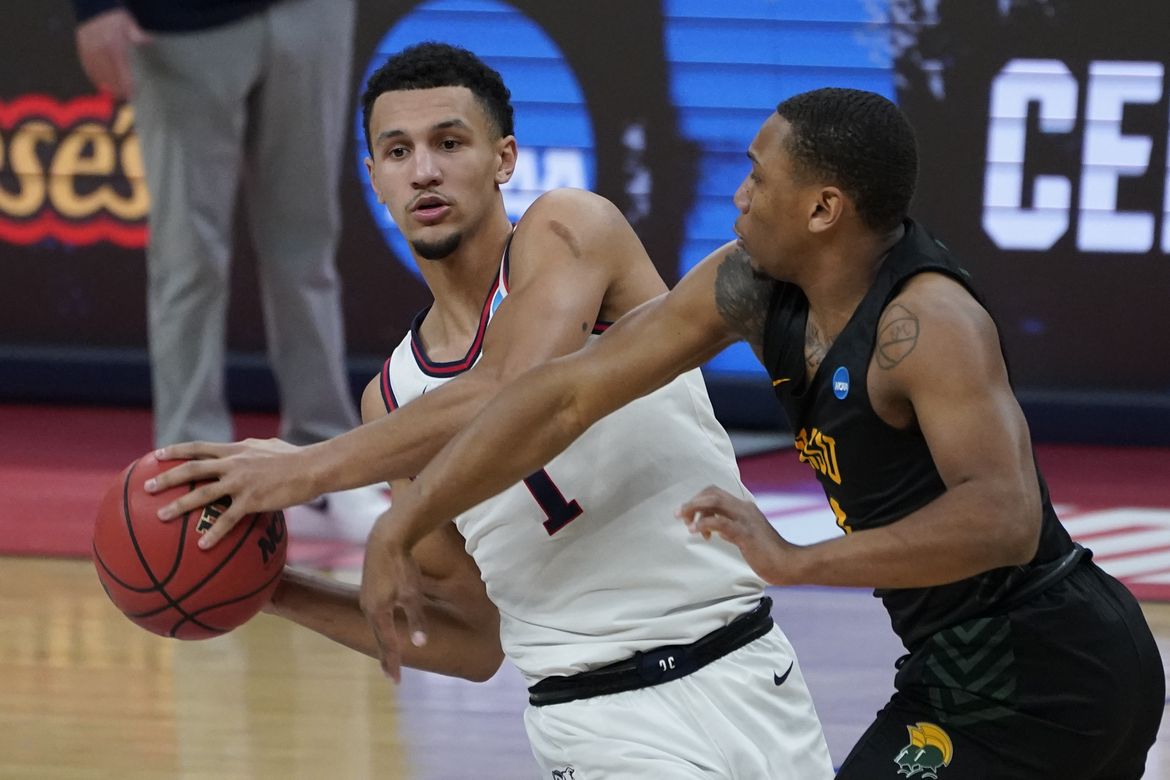 Gonzaga: Speaking of telling the tale, Jim Meehan has you covered from Indiana. He has a preview focusing upon another NCAA challenge, the short turnaround. And he has the key matchup as well as a notebook of interesting items, including comments from Suggs. … In Texas, Jim Allen has the coverage, with a preview and a notebook in anticipation of the Belmont battle. … The baseball team finished off a WCC-opening sweep of Santa Clara. … The Zags are the pick here. … We looked around and can offer some coverage from Oklahoma, as the Sooners look to make a little history. … Elsewhere in the West Coast Conference, if you want to look at the bright side of BYU’s season, we can offer these stories. … The BYU women were happy to make the tournament. Now they want to make some noise. 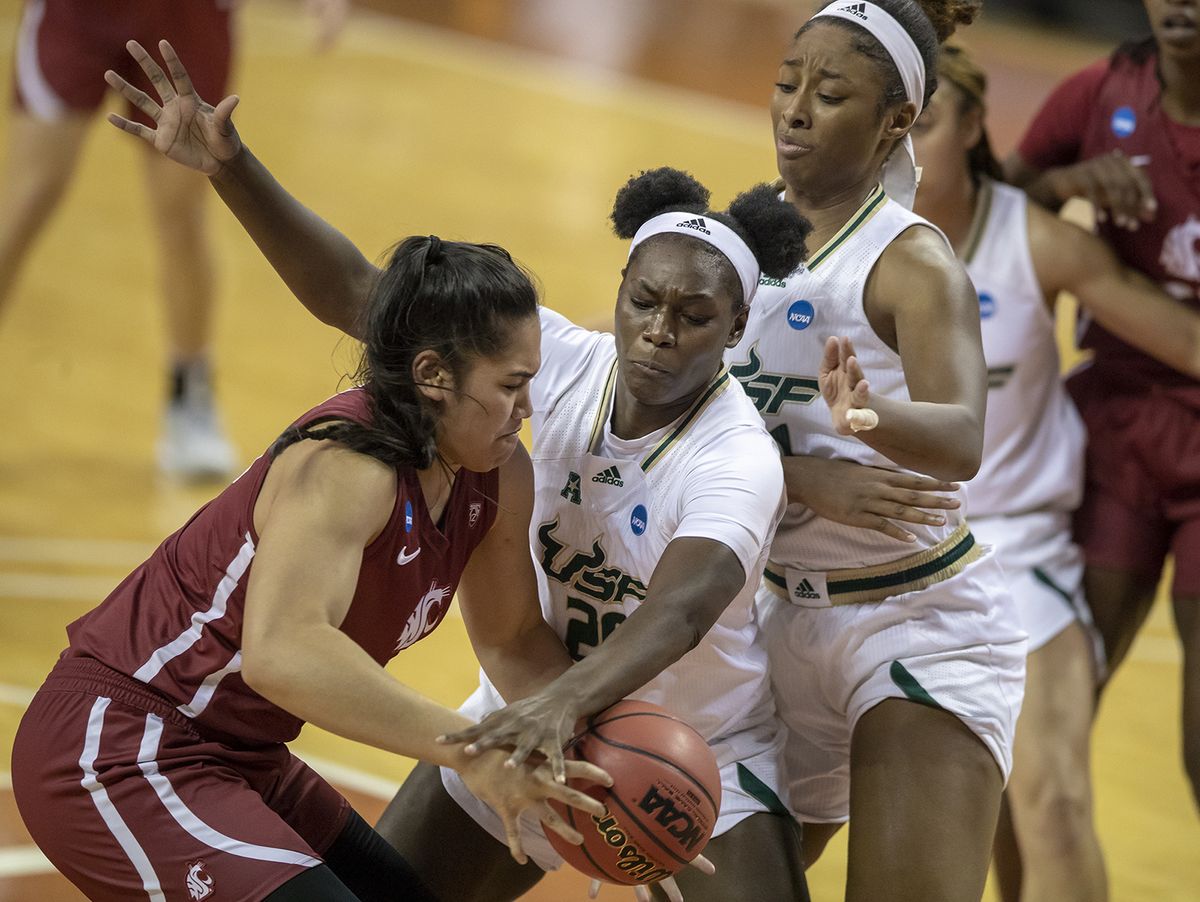 WSU: Jim Allen also covered the Cougar loss in Austin. … We can offer a recap with highlights as well as a photo gallery from the game, supplied by the Associated Press. … Washington State tennis player Savanna Ly-Nguyen won a prestigious award. That news leads off our weekly local briefs. … The baseball team lost at Oregon State. … Around the Pac-12 and college basketball, the feel-good story for the conference, among many in a productive first weekend, is Oregon State. The Beavers held off Oklahoma State in a game of runs last night. … Oregon will have to hit shots and clamp down on Iowa if the Ducks want to get to the Sweet Sixteen. … The challenge is a tough one, but Colorado has a chance to make a statement against Florida State. … Mick Cronin thinks everyone has slept on the Pac-12. Literally. He had a lot to say yesterday. Today his Bruins must believe as they face Abilene Christian. … USC tries to knock Kansas from the tournament early and move to the Sweet Sixteen. …The Utah opening may not be as special as some might think. … In the women’s tournament, top-seeded Stanford rolled over Utah Valley. … Oregon State had little trouble with Florida State. … Oregon needs to turn its season around quickly. … UCLA meets Wyoming as a heavy favorite. … Arizona kicks of the conference’s day against Stony Brook. … In football news, Arizona is trying to shore up its defense in the spring.

Chiefs: It hasn’t been a good start to the season for Spokane. The Chiefs dropped their third consecutive game Sunday, this one to Portland in Kent. Kevin Dudley has the coverage.

Mariners: As spring training wears on, it’s about time to make some roster decisions. … James Paxton will be one of the starters. He threw well in his spring debut and the M’s won.

Seahawks: The Hawks’ roster will look a bit different as well, even after the remaining holes are filled. … Seattle made some signings official.

• It’s going to be a busy Monday. We will have our morning TV Take, though it won’t post here until the afternoon. And then we will watch the Gonzaga women play, all the while trying to keep their biggest fan from throwing things at the TV. (“Hey, I need that for work.”) Maybe after that I can take my usual nap. Wait, no. There are too many great games on. Darn, it’s Monday. This isn’t supposed to happen. (Insert Garfield .gif here please Mr. Editor. … Hey Jess, where are you? First day on the job and you are A.W.O.L.) Until later …