A GRIP ON SPORTS • We may be neck-deep in the madness that is college hoops – see below – in March but some of us are mad about pro football all year. Not me, of course, but some of us. Maybe even you.

• Back in my days at St. Francis High, the priests forced us to memorize segments of Shakespeare’s greatest plays. In other words, parts of most of them, from “Hamlet” to “Much Ado About Nothing.” The only one I really remember, however, is the Tomorrow soliloquy from “Macbeth.” Mainly, to be honest, because I actually did memorize it and my buddy didn’t (he shall remain nameless because he helped me through so many math and science classes), allowing me the opportunity to bail him out on the test. The line I really remember: “It is a tale, told by an idiot, full of sound and fury, signifying nothing.”

Old Will was writing about life and its lack of meaning – nihilism before nihilism, really – but I’ve always, as in the past decade or so, equated it with the ramblings of sports fans on Twitter. See, who says Shakespeare doesn’t speak to the modern world?

The latest tales told by idiots? The demise of the Seahawks.

Truth be told, we were also full of sound and fury after Russell Wilson sounded off. Mainly because it’s our job. But also because we were worried the lack of an offensive line was threatening to snuff out his football fire, which seemed to be at the core of his concerns.

John Schneider made one trade, re-signed a bunch of guys who have been with the Hawks before and, presto, Wilson seems assuaged – if not ecstatic. That came yesterday when Schneider worked a little bit more of his magic.

Early in the offseason, Seattle cut last year’s best pass rusher, veteran Carlos Dunlap. Acquired midseason from the Bengals, Dunlap changed the tenor of the pressure up front, helping the entire defense improve. But his contract was too expensive to keep. And he wanted to see what he could command on the free agent market.

He found out. While he was in his learning mode, the Hawks didn’t stand pat. The re-signed Benson Mayowa, the Idaho Vandal defensive end who seems to be getting better with age. And they picked up Kerry Hyder in free agency, not only adding another pass rusher but weakening NFC West-rival San Francisco in the process.

All well and good. More was needed though. Re-enter Dunlap. He’s coming back with a new contract that helps the Hawks’ cap situation. In fact, he and Hyder, combined, will play for less than what Dunlap was due before. That’s Schneider witchcraft all right.

And yet nothing is perfect, not in the NFL. To make it all work, Seattle needed defensive tackle Jarren Reed to re-work his deal. The team and Reed couldn’t work it out. So today the Hawks’ best inside lineman will be cut, freeing up space on the books, sure, but leaving a hole in the run defense.

• Jim Meehan glimpsed into a crystal ball yesterday and saw what was coming this morning. It was a driving force behind this story concerning Gonzaga’s recruiting in the changing landscape of college basketball. And it was prescient, as Jim’s story this morning shows.

Hunter Sallis, the 6-foot-5 point guard from Omaha, is headed to Gonzaga. (In other, non-breaking news, Jalen Suggs will not be back. Duh.)

As 247Sports’ No. 6-rated recruit in the composite 2021 rankings, Sallis becomes the highest-rated recruit, topping even Suggs, who was 11th in last year’s final tally. And Sallis will remain the Zags’ top recruit until Chet Holmgren, Suggs’ former high school teammate, finally makes his decision concerning next year. Like Sallis, most folks who make their living covering basketball recruiting – yes, dad, you can make money doing that – think Holmgren will head to Spokane as well.

And don’t forget, Kaden Perry, the 6-9 power forward from Battle Ground, Wash., has already signed with the Bulldogs. USA Basketball named Perry, as well as Sallis and Holmgren, to the U.S. team yesterday for the upcoming Nike Hoop Summit. They may have been joined by Ben Gregg as well, except Gregg is already in a Gonzaga uniform, having graduated early and joined the Zags midway through this season. It is shaping up to be a great recruiting class. 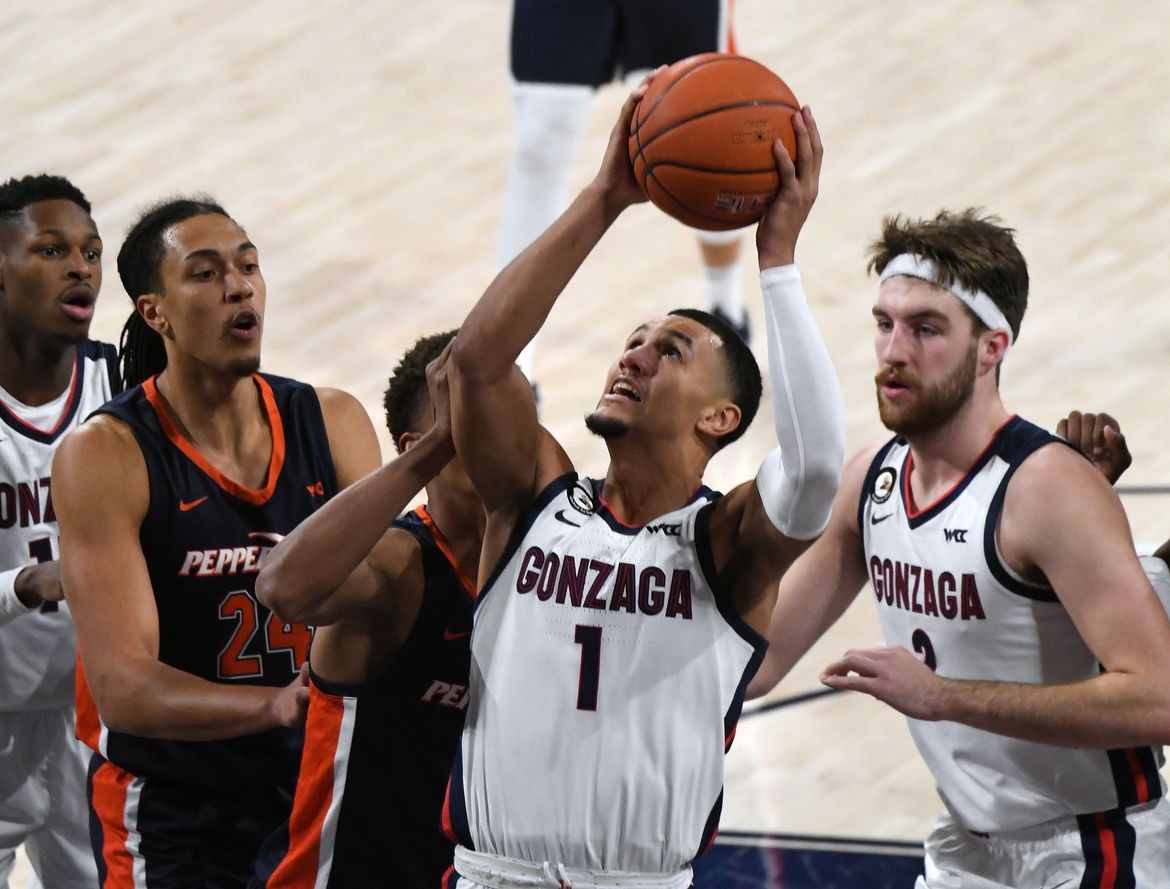 Gonzaga: Besides Jim’s recruiting story, there is much more to read concerning the Zags. The team went to TopGolf on Thursday and Jim passes along a scouting report. … Jim also has a story on the odds for the remaining NCAA teams. As expected, Gonzaga is still the favorite. And is here as well. … John Blanchette delves into Hinkle Fieldhouse and how much basketball life has changed since the fictional Hickory team won the Indiana state title. … Life in the bubble doesn’t allow for interactions, as Ryan Collingwood explains. … When in Spokane, the Gonzaga players have their favorite places to get their hair cut. Justin Reed passes those along in this piece.

WSU: Around the Pac-12 and college basketball, the conference teams have relied on outside shooting to stay alive. … Oregon State, a program with questions, will need everyone to play well to get past Loyola of Chicago. … Can USC do even better than Andy Enfield’s last Sweet 16 team? Oregon is in the way. … UCLA, even without Chris Smith, has advanced farther than most would have expected in the tournament. … Utah’s coaching search may have to start over. A prime candidate said no. … Colorado reached some milestones this season. … Washington may reach a milestone: most players leaving and coming. … In the women’s tournament, it was an unexpected ending for UCLA. … Stanford has been here before. Many times, though the first was in 1990. … Oregon has a tough task in Louisville. … In football news, Washington has a transfer coming its way. … Arizona is moving quickly. … Linebackers like Utah. 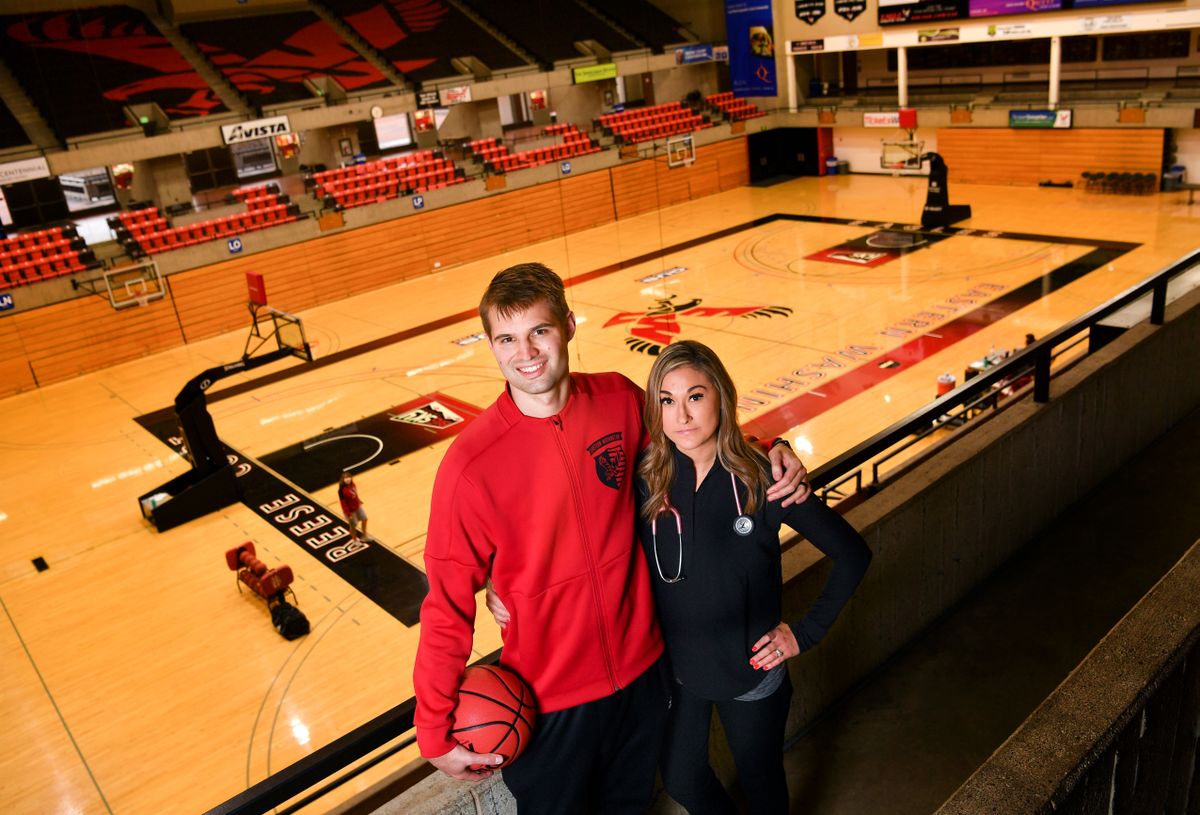 EWU: The Eagles have replaced Shantay Legans. David Riley, the former Whitworth star and longtime Eastern assistant will be the next basketball coach. Ryan Collingwood, who broke the news, has all the particulars in this story. … Eastern will host Cal Poly, and former football coach Beau Baldwin, tomorrow. Dan Thompson, filling in for Ryan, has this preview of the Eastern-flavored matchup.

Preps: There are no regional or state championships to be won this year, so Mt. Spokane’s volleyball team did all it could do. The Wildcats won every match. Dave Nichols has the coverage of their final one, a sweep of Gonzaga Prep. … Dave also has a roundup of last night’s other action. … Jim Allen delves into the response the school district is getting concerning the stadium. One question. If almost everything, including the financial circumstances and parking concerns, have changed in the past couple years, why should an advisory vote on a different proposal still matter?

Chiefs: Spokane is finally home. The Chiefs will play Seattle tonight. Dan has a preview. … Larry Weir spoke with the voice of the Chiefs, Mike Boyle, for the latest Press Box podcast.

Mariners: The M’s will keep their prospects even closer this season, even if it isn’t easy to do. … They lost yesterday.

Seahawks: The Dunlap news, and the ensuing Reed departure, is all the rage in Seattle. As well it should be. … The new term around the Hawks is “voidable years.” It isn’t just jargon.

Sounders: Seattle has a new kit and a new player adapting to the U.S.

• A nice day seems on tap. And I’m attending a reunion with a former college baseball teammate, one who moved to Spokane prior to the pandemic. Our plans to get together last March were derailed for some reason. We are both vaccinated now and are trying again. I expect a lot of stories – and a lot of memory lapses. Until later …