INDIANAPOLIS — Drew Timme won a much-anticipated matchup with vaunted USC center Evan Mobley and Gonzaga’s star sophomore scored 23 points with five rebounds and four assists to send the Bulldogs to the program’s second Final Four in five years with an 85-66 win over the Trojans at Lucas Oil Stadium.

Top-seeded Gonzaga scored the game’s first seven points and never trailed sixth-seeded USC. The Bulldogs entered halftime with a commanding 49-30 lead and extended the advantage to as many as 24 points in the second half, winning their 27th straight game by double figures.

Leading up to Tuesday’s game, many of the headlines surrounding USC vs. Gonzaga centered around the individual matchup between the Bulldogs’ Timme, a consensus Second Team All-American, and the Trojans’ Mobley, who swept the postseason Pac-12 awards, winning Player of the Year, Defensive Player of the Year and Freshman of the Year.

Mobley scored USC’s first bucket of the game, but Timme made four of the next five field goals for Gonzaga and entered halftime with 15 points and three rebounds. Mobley had 11 points and five rebounds at the break, but finished with 17 and five. It was the third consecutive 20-plus point game for Timme, who’s now up to 85 points in four NCAA Tournament games.

As it’s been most of the season, Gonzaga’s offensive attack was balanced, with Corey Kispert and Jalen Suggs both chipping in 18. Suggs, the freshman sensation from Minnesota, approached triple-double territory, finishing with 10 rebounds and eight assists. Joel Ayayi had nine points and six rebounds.

The Trojans and Bulldogs had played just four minutes when official Bert Smith collapsed to the floor and briefly laid motionless before being escorted off the floor. Smith was responsive as he left the court and wasn’t transported to the hospital, according to the TBS halftime show.

Evan Mobley’s brother Isaiah Mobley was USC’s leader inside, with 19 points and seven rebounds. Drew Peterson scored 13 points and Tahj Eaddy had 11 more for the Trojans.

Gonzaga held USC to 38% from the field and outrebounded the Trojans 41-29.

How many times have they won? Thirty – the first NCAA Division I program to win 30 or more in five straight seasons, and this one shortened by COVID-19 pauses and cancellations. | Read more »

TV Take: Gonzaga made sure upstart USC had no chance early in Elite Eight drubbing

If anyone was going to give Gonzaga the test it has yet to see in the NCAA Tournament, it was going to be USC in the Elite Eight. | Read more »

Despite lopsided score, duel between Gonzaga’s Drew Timme and USC’s Evan Mobley lives up to hype

Media members covering Tuesday’s Elite Eight at Lucas Oil Stadium didn’t have to put much thought into their votes when casting ballots for the most valuable player of the NCAA Tournament’s West Region.  | Read more »

He’d been a little off his game, committing 14 turnovers and making 10 of 28 shots while averaging 8.7 points in Gonzaga first three tourney wins. He credited longtime friend Paige Bueckers, the standout freshman at UConn, with an assist in helping him return to form. | Read more »

As blue and red confetti showered Gonzaga inside a cavernous Lucas Oil Stadium on Tuesday, the Bulldogs’ loyalists experienced a deluge of their own. | Read more »

Two nets down. One to go. ✂️ pic.twitter.com/GeAZe7uHIM

The Man.
The Stache.
The Texan.
The Most Outstanding Player of the West Region.

18:03 – Gonzaga 7, USC 0: The Bulldogs jump out to a quick lead behind four points from Joel Ayayi and three Trojans’ turnovers.

Jalen Suggs finished in transition to put GU up 7 and USC called its first timeout. Ayayi is 2-of-2 shooting, has one rebound, one assist and one steal that lead to Suggs’ layup.

Referee just fell to the court.

They’ve brought a stretcher on for the fallen referee, Bert Smith.

Referee Bert Smith is up, still being seen to by medical personnel. He’ll be wheeled out.

Official appeared to be responsive as he got stretchered off the floor. Players, media members and fans all clapping. Thank god. pic.twitter.com/AIhhJwJqxo

Gonzaga and USC hadn’t played four minutes of their Elite Eight matchup at Lucas Oil Stadium when one of the most frightening moments of the 2021 NCAA Tournament transpired in front of the Bulldogs’ bench. | Read more »

The Zags have made their last five shot attempts. USC hasn’t scored in 2:39.

Drew Timme has nine points on 4-of-7 shooting to lead Gonzaga.

Isaiah and Evan Mobley each have two points for USC.

Evan Mobley has six points to lead the Trojans, who are shooting 30% and have five turnovers.

The Bulldogs hold a 20-6 edge in paint points as they have had plenty of success getting Timme the ball in dangerous spots against USC’s 2-3 zone.

7:48 – Gonzaga 29, USC 15: Jalen Suggs has eight points, five assists and three rebounds and the Bulldogs take a 14-point edge into the under-8 media timeout.

Isaiah Mobley has nine points on 4-of-7 shooting to lead USC.

Jalen Suggs has 11 points for Gonzaga.

Gonzaga 49, USC 30: Drew Timme has scored 15 points, Jalen Suggs is halfway to a triple-double and the No. 1 Bulldogs lead the Trojans by 19 at the break.

Timme is 7-of-12 shooting in 15 minutes. The Zags center has three rebounds, three assists and two fouls.

Suggs has six rebounds and five assists. The freshman guard is 5-of-7 shooting and has zero turnovers.

Timme (15pts) & Suggs (13pts) were BALLING in the 1st half 💪@ZagMBB #MarchMadness pic.twitter.com/IDpZXQ504Z

The Trojans are shooting 35.5%, 12 points below their season average.

Corey Kispert has nine points and five rebounds for GU. Andrew Nembhard has added six points and played all 20 minutes in the half.

USC scored the first points of the half, but Gonzaga has gone on a 7-2 run and the Trojans called their third of four timeouts.

Joel Ayayi hammers home a transition dunk behind pulling guard Drew Timme and it’s 56-34 Zags, and Andy Enfield burns another timeout. Hey, they’re no good to him in LA.

14:43 – Gonzaga 58, USC 39: The Bulldogs have missed their last four shot attempts going into the under-16 media timeout.

Gonzaga seems to be in cruise control in the second half. The Zags have shot 41.2% this half.

#Gonzaga starters are announced at Lucas Oil Stadium. Bulldogs are minutes from tipoff in the Elite Eight. pic.twitter.com/ufRLf31ctK

Either #Gonzaga makes its second Final Four or @MichaelLKatz is a very happy man by the end of the night. #MarchMadness pic.twitter.com/3RbysUYmn8

We are less than an hour away from tip-off 🏀…

Fans in front of Lucas Oil Stadium 1.5 hours before tip.

Zags and USC. Ticket to the Final Four on the line. pic.twitter.com/KlObfceSJJ

Made for this moment. pic.twitter.com/GdCAyYS9DG

This game was originally scheduled for Nov. 17 at the Phil Knight Invitational in Portland, but it joined a long list of games canceled in response to the COVID-19 pandemic. | Read more »

It’s perhaps the most intriguing matchup of the season to this point. That’s saying something since Gonzaga’s Drew Timme has already gone up against Iowa’s Luka Garza, the probable player of the year. | Read more »

John Blanchette: USC is the NCAA Tournament’s newest darlings, but there’s no reason to fall out of love with Gonzaga

You know what the NCAA Tournament is all about? It’s about love. | Read more »

USC guard Tahj Eaddy is about to cross paths with Gonzaga again in a basketball career that has covered most of the country. | Read more » 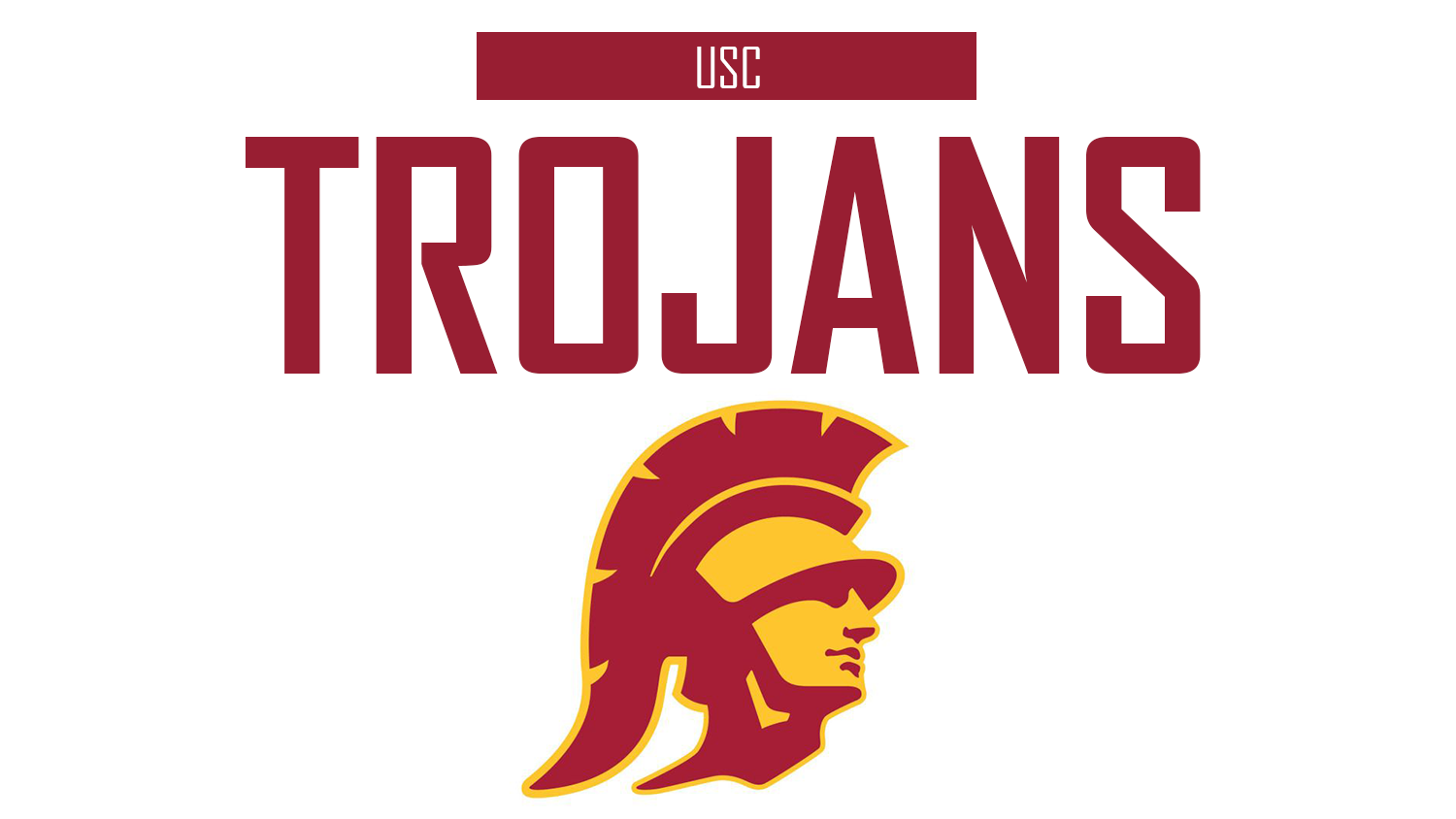 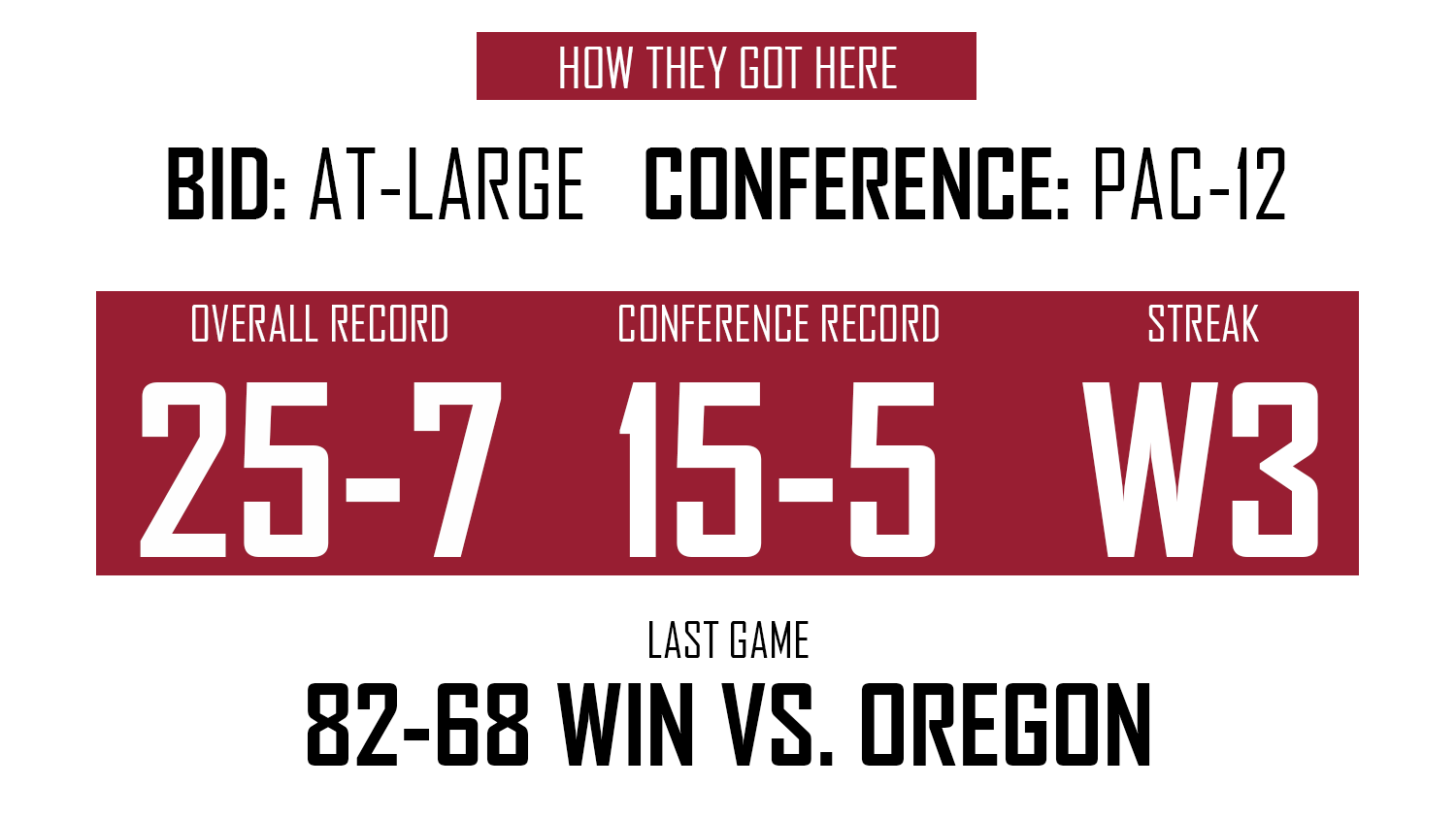 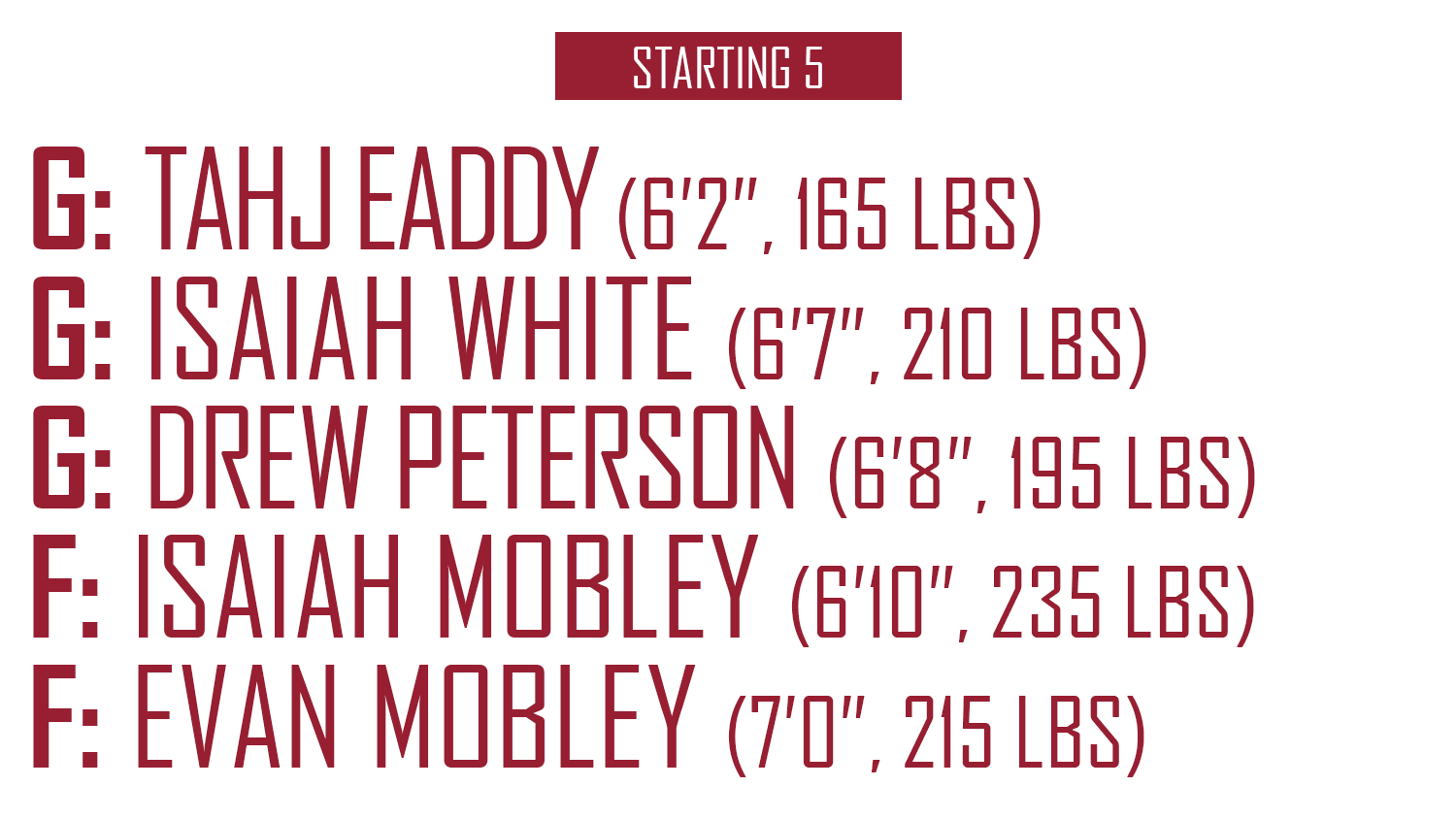 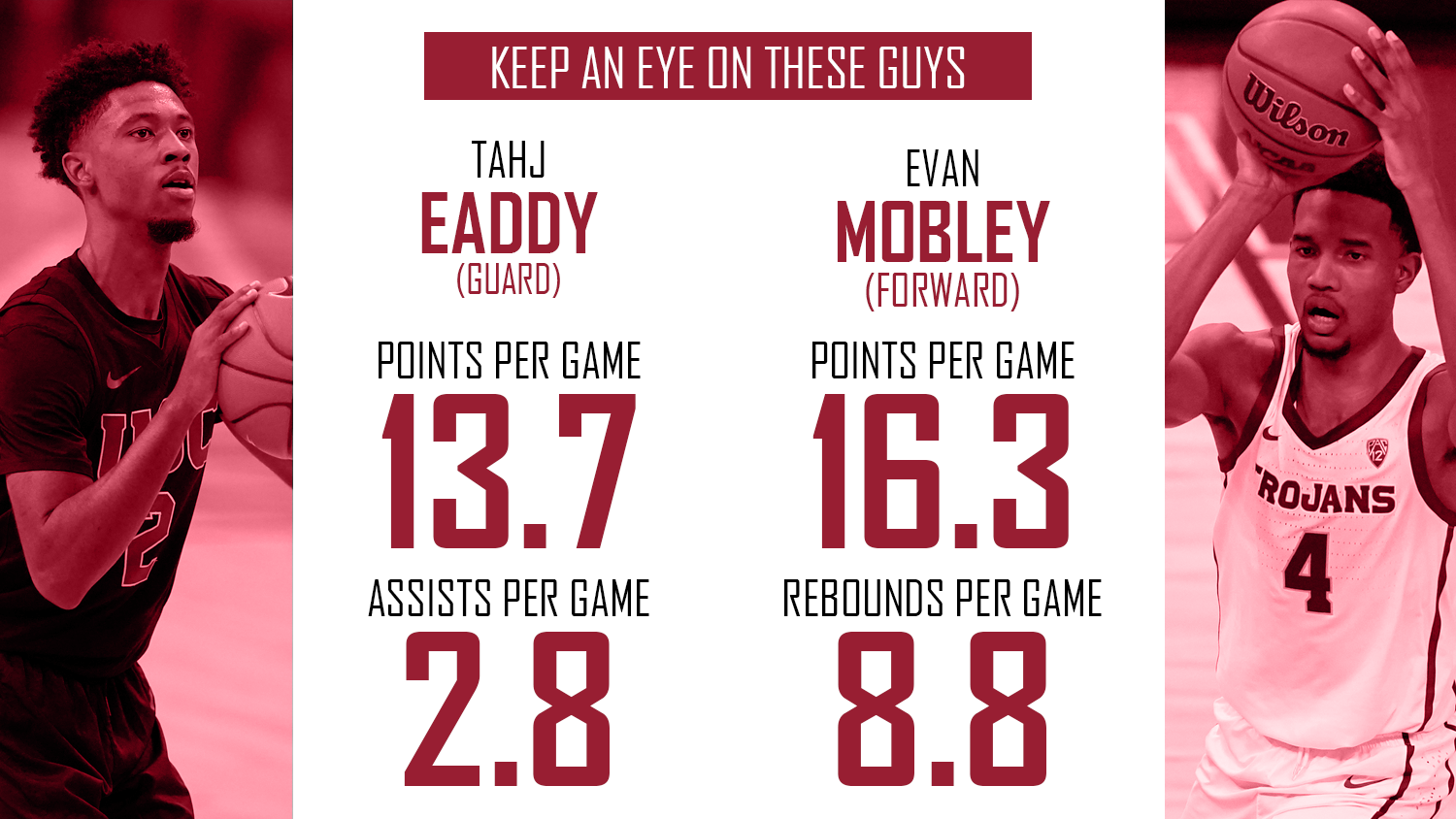 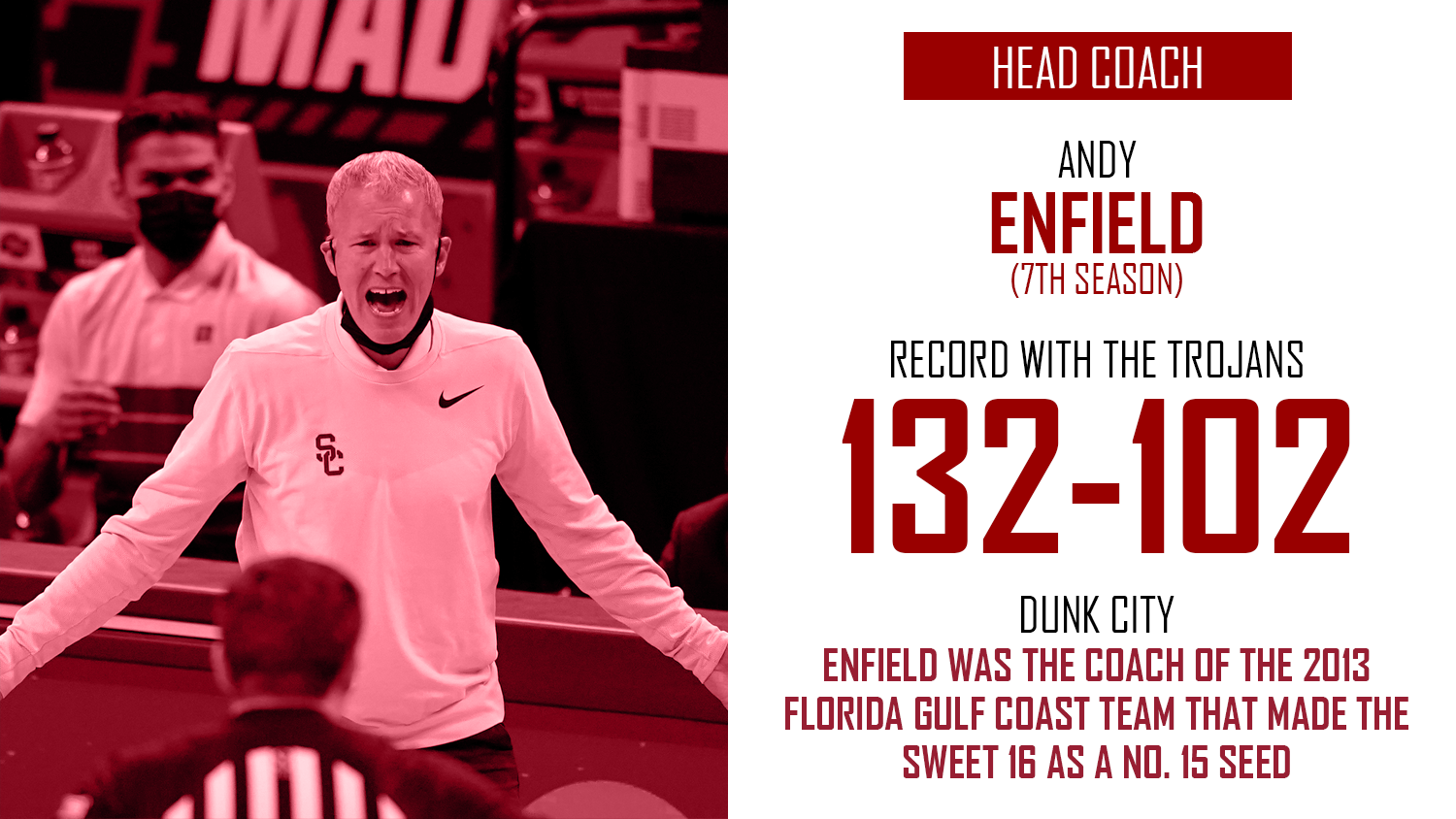 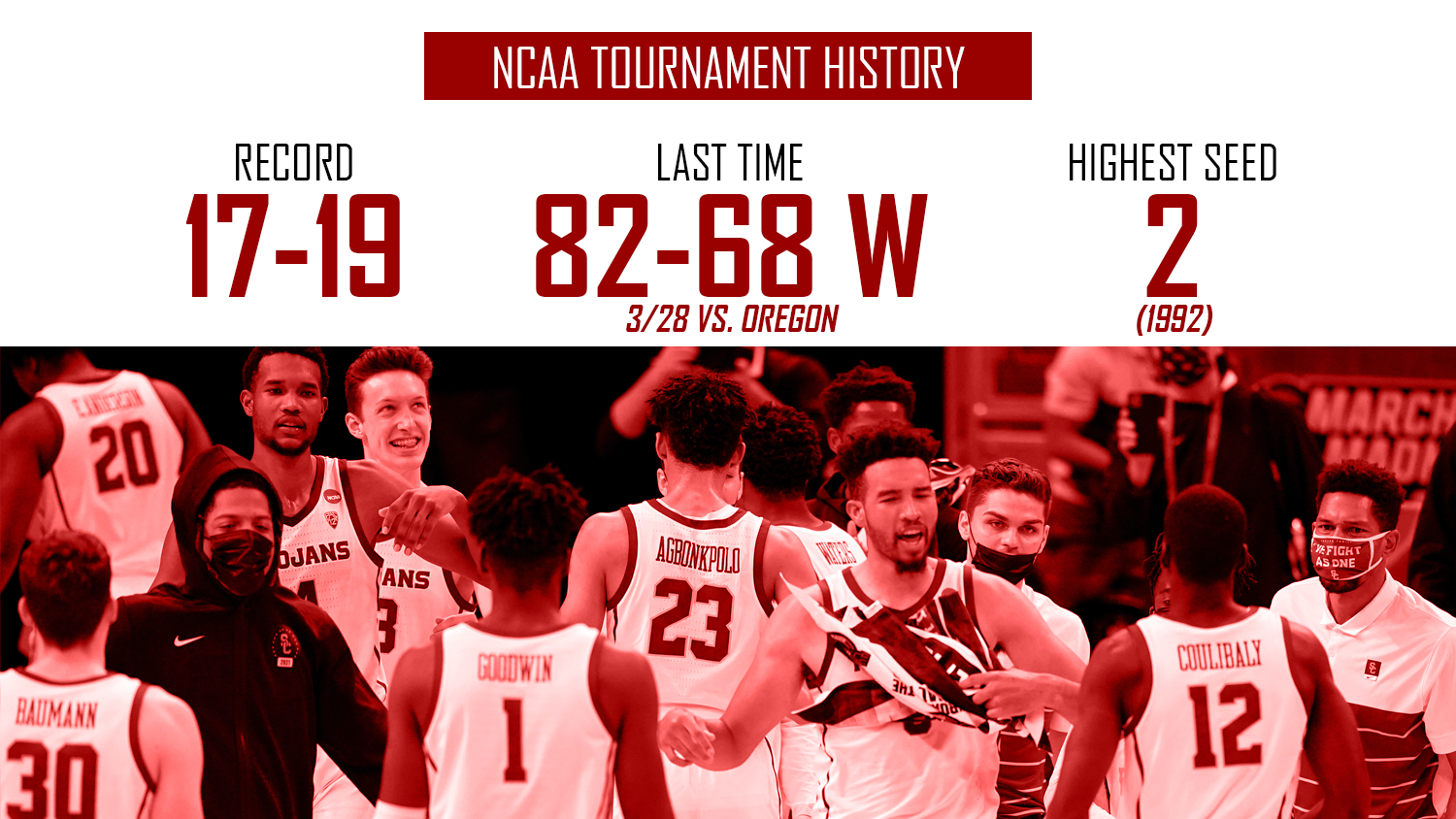 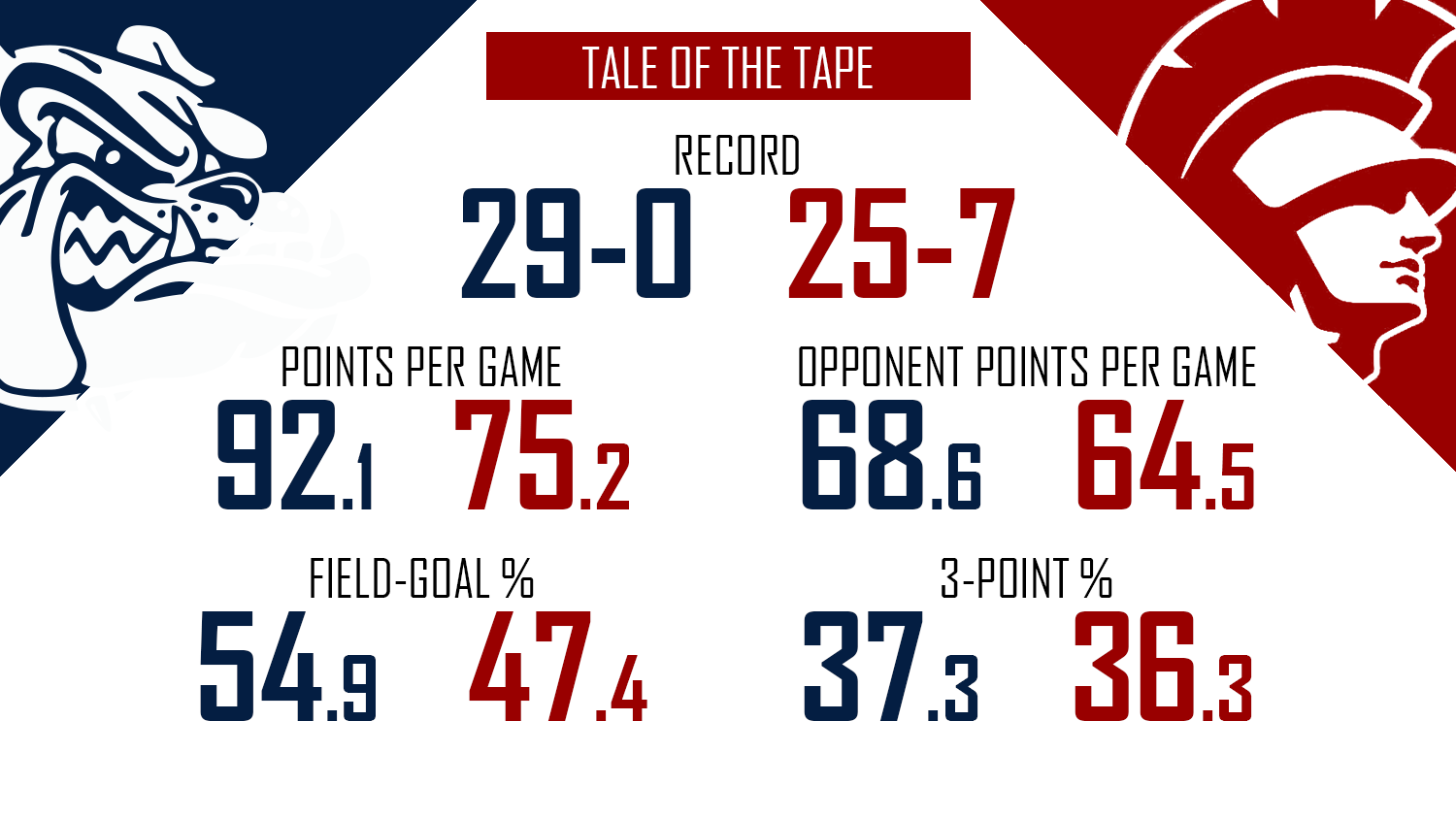