Two police cars were parked last week on Jefferson Street in front of Spokane Boxing Gym but a peek inside the gym revealed not uniformed officers but instead a group of teens shadow boxing next to sweaty officers in police department hoodies.

“You hear all this? You hear the skipping rope, hear the bags, hear the pop, you hear the bells,” said Rick Welliver, gym owner. “It’s electric, man.” 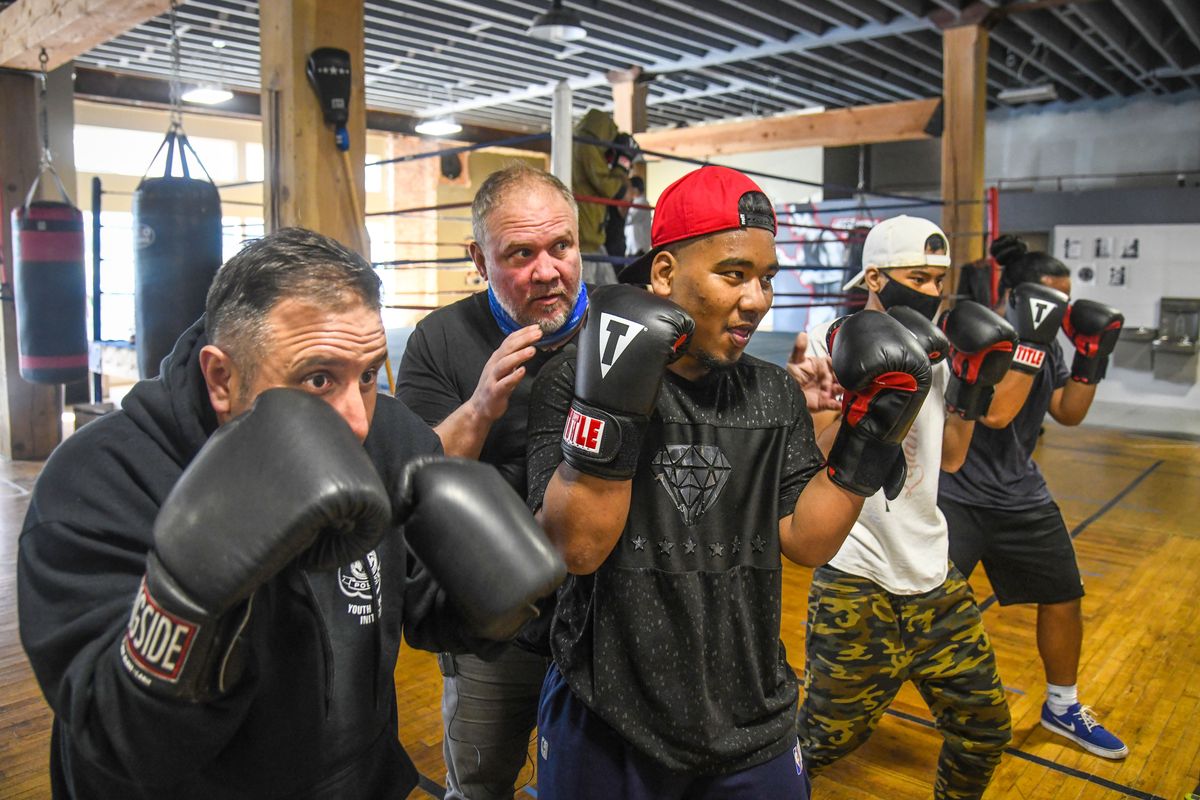 Welliver, a former professional boxer and longtime coach, has been pushing for an inner city sports league for years but hadn’t received support from the city until fall 2019.

“We finally got a police chief, Chief Meidl, that’s got it figured out,” Welliver said. “This is the first chief that took intercity sports and youth boxing seriously.”

The Police Activity League partnered with Welliver to bring teens over from the downtown location of Spokane Youth for Christ every Tuesday for a workout. Teens on probation also joined and the program began to grow. But the COVID-19 pandemic quickly shut down the boxing Tuesdays until a few weeks ago.

“A lot of these kids were displaced and had nowhere to go ‘Coach can I come to the gym?’ ” Welliver recalled of the past year. “This last year has been a serious test, a serious test, and it’s just a different way of thinking.”

Welliver prides himself on creating an inclusive space for teens who need support and mentorship both in boxing and in life.

“Boxing saved my life,” said Welliver, who grew up in Spokane’s Hillyard neighborhood. “Boxing is truly kind of a magic. It gives strength to the weak, discipline to the undisciplined and makes people feel like they’re a part of it.”

While Welliver has always sought out kids who need support and guidance to stay out of trouble, he has struggled to connect to new kids in recent years. Partnering with the police department has brought a new group of teens into the fold with the cost covered by the Spokane Police Foundation.

“I think for these kids, they like to think they’re tough,” said Officer Graig Butler. “They think that they’re really able-bodied and ready to box in the street and then they get in here and they learn what they’re made of and how hard this really is.”

The partnership is unique for the Police Action League because it’s one of their few athletic programs that focus on teenagers. Attendance ranges from a handful of kids to about 15 each week with an extremely committed three or four children training for a PAL boxing event in August.

For Yakobo Mleha, a 17-year-old junior at Lewis and Clark High School, boxing has been a step up from other sports like basketball and wrestling.

He and a group of his friends started coming over from the after-school program and were met by Welliver’s blunt personality.

But Mleha quickly warmed up to Welliver once he saw the coach had his best interest in mind.

“I think as society we’ve forgotten how to make kids feel special and I think we’ve forgotten how to give kids options. Not everyone wants to be in a team sport,” Welliver said, before yelling at a group of young boxers to keep their hands up. “This is a chance for these kids to feel like they’re a part of something.”

Mleha is one of a few kids who has stuck with boxing over the last year and half, both with PAL and on his own. He hopes to participate in the August exhibition to see how far he has come.

“I started out not knowing what to do so I just want to see how good I’ve gotten,” he said. “If this goes pretty good I might have like a career in boxing.”

Once teens talk to Welliver, they’re hooked, often arriving at the gym early and waiting for Welliver to open up. The boxing gym is also a safe refuge for teens who have nowhere else to go.

“This is a safe place for a lot of these kids,” Welliver said. “We’ve had some of them sleep in this gym. Some of these kids are sleeping underneath the railroad viaduct and this is their place – they’re always welcome.”

Robert Avery, 16, wandered into Welliver’s gym about eight months ago. He’s a junior at Lewis and Clark High School.

Avery talked to Welliver about wanting to start boxing to have something to do during the pandemic.

“I needed something to do, and I have a punching bag in my basement,” Avery said. “I mean I’ve always liked boxing.”

Welliver told Avery to come in with a parent to get him signed up.

“I was really tired the first time I came in to work out,” Avery said, mid-workout and dripping in sweat.

Since then, Avery has been working hard to improve his skills and had his first fight recently.

“I didn’t win but that was because I wasn’t fighting smart, that was on me,” Avery said. “It was a good fight, you can ask Rick (Welliver). He was in my corner for the fight.”

A sense of pride was in Avery’s voice despite losing the fight, a sentiment also shared by Welliver who said the fight was close.

Even after a loss, Avery continued to show up for workouts, hoping to fight this summer at the PAL exhibition.

That drive to show up and do the work is something Welliver teaches.