It was a tearful morning punctuated with laughter outside the Spokane County Courthouse Tuesday as family and friends honored the law enforcement officers across Washington who died in the line of duty during the last two years.

The ceremony was canceled last year because of the COVID-19 pandemic.

As the pandemic continues to rage on, the ceremony was the first time some families were able to honor their loved ones.

“We have to have closure for these officers, There are widows here who haven’t even had a service for their officer yet,” said Sue Walker, co-chair of the Law Enforcement Memorial Project Committee. “Put yourself in their place and realize their loss. It’s the least we can do is to give them that opportunity to grieve, to celebrate, to honor the memory and the service and the sacrifice that these officers have given.” 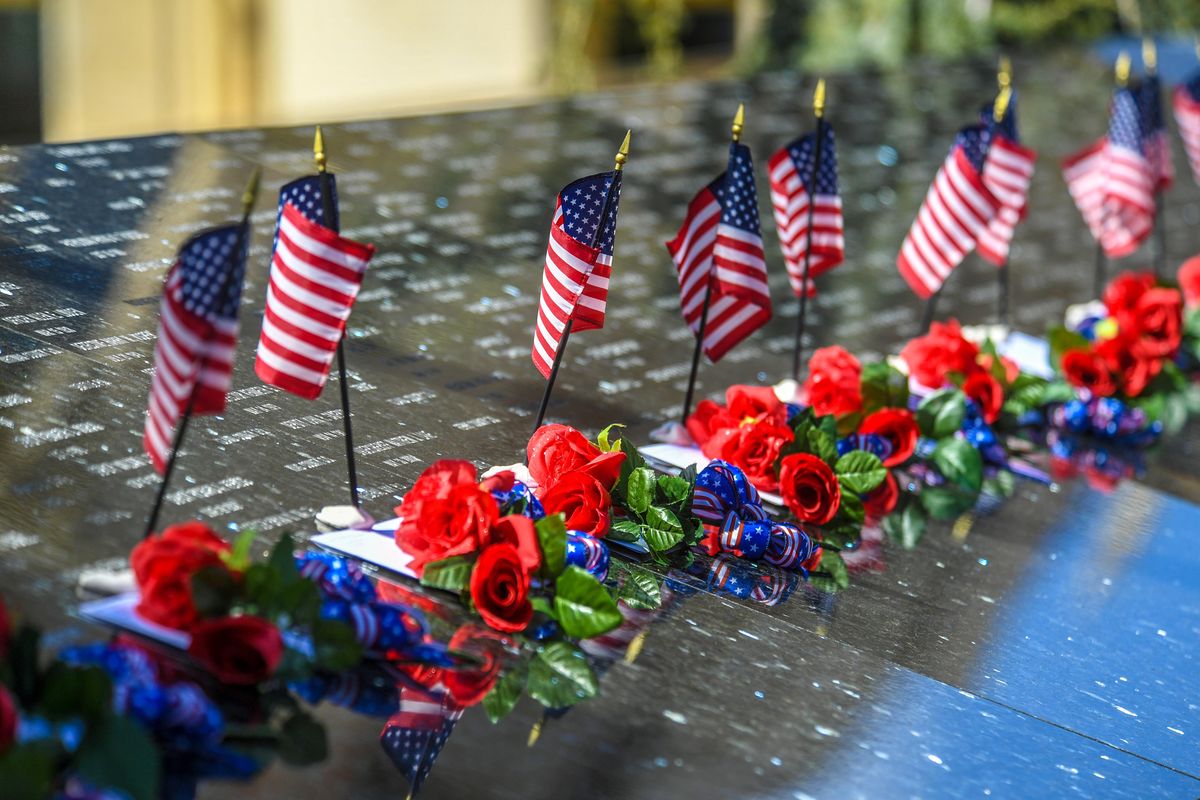 Flags and flowers mark the names of fallen at the Law Enforcement Officers Memorial Project before the 33 Annual ceremony, Tuesday, May 4, 2021, at the Public Safety Building in Spokane. (DAN PELLE/THE SPOKESMAN-REVIEW)

Officer Kurt Enget from the Bainbridge Island Police Department died of COVID-19 early in the pandemic when there was little known about the virus that shut down the world.

“Officer Enget died April 10, 2020, to an illness that has haunted us all for the last year,” said Sgt. Trevor Ziemba during Enget’s eulogy. “He was our first officer in Washington state to die from this illness and it was very unknown at this time what we were dealing with and it was tough.”

Despite the unusual circumstances of his death, Ziemba said Enget would be honored to have his name with his fellow officers who died in the line of duty.

“He would be honored to have his name with the other men and woman who have sacrificed for our great country, for our great communities, and for each other,” Ziemba said.

Spokane Police Chief Craig Meidl said when the pandemic first hit his officers were “extremely nervous” with so much unknown about the disease.

Those officers showed up when others were encouraged to stay home, which is a “testament to the calling that this job is for a lot of law enforcement,” Meidl said.

Honoring the five officers who died of COVID-19 or related complications was the right decision, Meidl said.

More officers nationwide have died of the disease than all other causes combined with at least 289 officers recorded and at least another 100 who are presumed to have died after becoming infected on duty that are still in the verification process, according to the event’s program.

In Spokane on Tuesday there were 18 officers added to Spokane’s memorial along with two K9s. With those additions there are now 347 officers and 26 K-9s honored at the memorial. Two of those officers were from the Spokane area.

Lt. Jon “J.D.” Anderson died in July 2019 from a complication following five surgeries to repair an injury sustained while on duty in 1997.

“J.D. was larger than life, someone who filled the room with his presence, he was humble, he was kind,” said Police Chief Craig Meidl.

“Getting a word in edgewise with J.D. was an art, but his passion and his kindness made looking for those openings and a chance to speak and absolute pleasure,” Meidl said.

Anderson’s widow, Michelle, sat in the second row during the ceremony with tears welling up in her eyes. Anderson had been on the honor guard, traveling across the state to participate in funerals and participating in many ceremonies just like this one here in Spokane.

It was a long road to get here because of the way he died, when it’s not a typical line of duty death it’s very hard to prove, Michelle said. She felt so strongly that his death was related to his work, she added.

“This is what he deserves,” Michelle said. “I just hope he’s proud of everything I’ve done, the family has done, to try to keep him alive and recognized. He was a stellar man on and off the job.”

Toward the back of the ceremony stood about 20 friends and family members of Tualip Tribal Police Officer Charlie Cortez, 29, who was lost at sea after a rogue wave capsized their 24-foot fisheries vessel near Jetty Island, according to the Everett Herald.

“While it was hard knowing that Charlie’s journey left him lost at sea, the waters are now seen differently for all of us. We owe it to Charlie to take a moment to shift our thoughts from how much we miss him to our own thoughts of how funny and joking and laughing and happy and comical times that we’ve all shared with him,” said Chief Chris Sutter of the Tualip Tribal Police Department. “You know that those, you know what those moments were like, and you can almost hear him chuckle.”

Officer Jaymes “Jay” Hughes with the Kalispel Tribal Police died on Jan. 11 when he suffered a massive heart attack while performing an arrest.

“He was a servant of the community,” said Diane Hughes, his wife.

He worked in Spokane County for almost 40 years as both a deputy and in corrections then he moved to his “retirement” job at the Kalispel Tribal Police, Wynecoop said.

“Jay was always willing to jump in and assist,” he said.

For Diane, the memorial was overwhelming, leaving her speechless.

“I don’t know if I can put it into words what I’m really feeling,” she said.

When she went up to the memorial and picked up her flowers and plaque, Diane stopped and laid her hand on her husband’s name before turning back to the loving arms of her family.

Editor’s note: This story has been updated to clarify Michelle Young’s comments.