Riverfront Park smelled like blooming lilacs and burning sage Wednesday as a march of hundreds – many American Indians and many wearing red – stretched from the Rotary Fountain to the Pavilion.

Under the Pavilion, glowing red for Missing and Murdered Indigenous Day of Action, one boy’s tie-dyed red shirt read, “Justice for Kamiah Bird.”

Eight months after Bird, 37, was shot and killed in Las Vegas, her family on the Spokane Indian Reservation feels no closer to knowing who killed her or why. 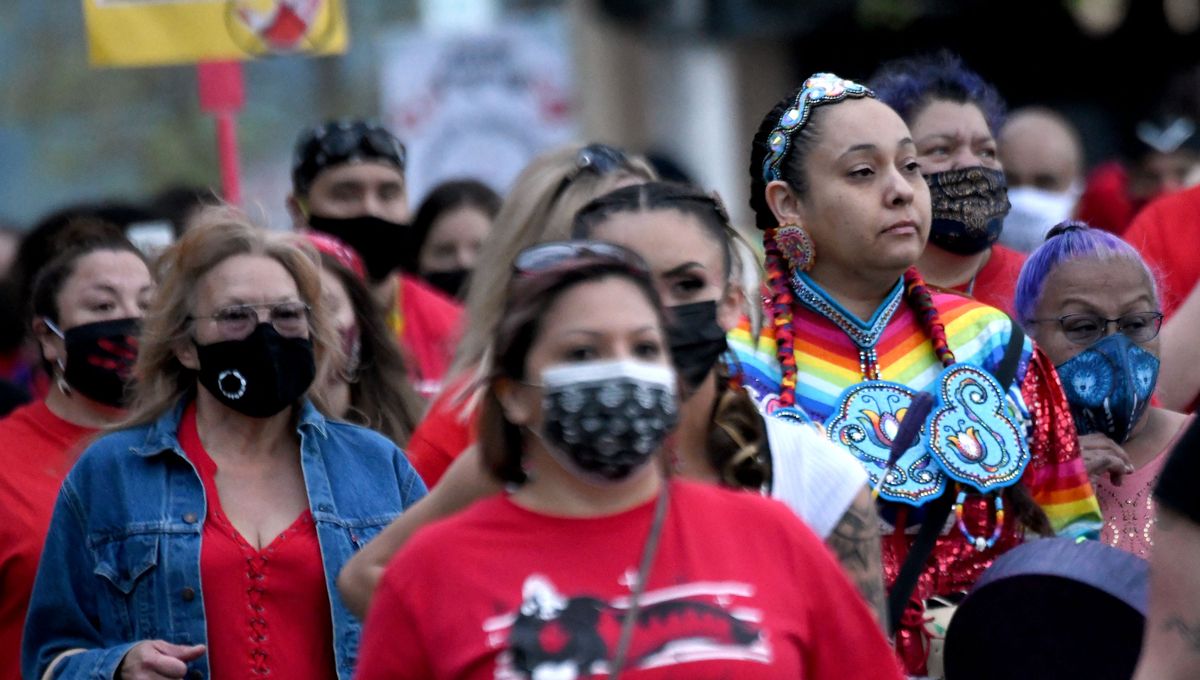 People gather and march in honor of the National Day of Awareness for Missing and Murdered Indigenous Women and Girls on Wednesday. (Kathy Plonka/The Spokesman-Review)

Bird, a Spokane tribal member, grew up on the Spokane and Colville reservations and spent most of her life in the Spokane area before moving to Las Vegas in 2018. On Sept. 18, Las Vegas police found her dead after her car crashed into another vehicle on Interstate 15. An autopsy revealed she had died from a gunshot wound to the head.

Kamiah Bird’s sister, Elima Bird, said they grew up aware of the possibility they would be killed or go missing, as did others on the Colville and Spokane reservations the Birds called home. Before Kamiah’s death, Elima was already involved in activism to get justice for missing and murdered indigenous women (MMIW).

There are at least 93 Indigenous people who are reported missing in Washington state, according to the Washington State Patrol’s list of missing Indigenous Washington residents, updated Monday. Of those, 45% are from Eastern Washington, though the region makes up only 22% of the state’s population.

The list doesn’t track the tribal membership of missing people, but it notes that 18 cases are being investigated by Yakama tribal police, six by Colville tribal police and eight by Spokane police or Spokane County deputies.

Elima said her family doesn’t know whether it was a stranger with road rage or someone in Kamiah’s circle who killed her, but she is shocked that more evidence hasn’t emerged, especially from security cameras at the businesses her sister drove by moments before her death.

“People in my own community have said, ‘Well, you know it’s probably not going to be solved because she’s Indian.’ That’s not OK with me,” Elima Bird said. “That’s never going to be OK with me.”

Kamiah was “very much a mama’s girl,” Elima said, and also a thoughtful and proud aunt. Before the move to Las Vegas, Kamiah brought Elima’s granddaughter, Reiya Abrahamson, on all kinds of adventures, including trips to Cat Tales Wildlife Center in Mead.

The last year of Kamiah’s life was full of travel as she crossed destinations off her “bucket list,” Elima said. Kamiah was working two jobs seven days a week in Las Vegas to pay for the trips, which took her to the Virgin Islands and China.

Alexis Gallaway-Tonasket, secretary of Spokane nonprofit MAC Movement that arranged for the Pavilion to turn red, has two missing great uncles who were last seen in the 1980s. She believes myriad systemic issues factor into deaths and disappearances of Native Americans.

“Getting substantial support from the justice system is extremely expensive, first of all,” Gallaway-Tonasket said. “A lot of people don’t have the social or legal support to hire a private investigator, do digs – my grandma has done several digs looking for two of her brothers and it’s extremely expensive.”

Drea Rose Gallardo, a Colville tribal member, local activist and co-founder of the MAC Movement, said American Indians are vulnerable in part because of higher levels of poverty and homelessness than the general population. She pointed to the disappearance of her cousin, Raelee Feather Meshell, a 34-year-old Coeur d’Alene tribal member and mother to two teens.

Meshell was homeless in Spokane for 10 years but always kept in contact with her mother, Glenda Matt. Matt said Meshell has been missing since November and looking for her is an uphill battle.

Meshell struggled with alcohol and drug addiction for years . The last time Matt heard from her, Meshell was calling from the Whatcom County Jail, saying she did not want to be homeless anymore and hoped her mother could help her when she was released.

Matt never received a call from her daughter. She has been distributing flyers and spreading posts on Facebook since, including pictures of her 5-foot-8, 150-pound brunette daughter.

“I visited many homeless camps down by Sunset Boulevard (Latah) bridge looking for my daughter,” Matt said. “I truly felt sadness and helplessness.”

Gallardo doubts authorities invest much time in investigating the disappearances and deaths of Native American women.

She points to her own experiences with police – in 2003, her cousin Eagle Michael, a hard-of-hearing teen with a BB gun, was shot and killed by a Spokane police officer.

Thirteen years later, while Gallardo protested the oil pipeline at Standing Rock in North Dakota in 2016, officers shot her with rubber bullets, she said. In Spokane, several police officers tackled her to the ground during a local Black Lives Matter protest and one used the knee-to-neck maneuver in a moment captured in a viral Facebook video.

“Nothing is going to happen overnight,” Elima Bird said. “There are a few wonderful activist people in our area and it starts in the communities, honestly. What I’d like to see in our community is for people to respect women. Teach it here. Start here. If we’re not going to be protected on a federal level or a state level, then our communities have to protect their women and children. That’s what has to happen.”

Editor’s note: This story has been updated to include the correct title for Alexis Gallaway-Tonasket’s and her name’s spelling.