Some things are worth the wait. Vern Eden, 87, has always wanted a Corvette. “I like fast cars,” he said. Last month, he finally picked up his brand new 2021 Corvette. The shiny red sports car gleamed like a ruby in its setting, the driveway of Eden’s Valleyford home.

When asked why he waited so long to purchase his dream machine, he replied, “Well, they finally got it right on this one. I didn’t like the way they were balanced before – heavy on the front end.”

Eden knows his way around vehicles and the open road. He spent 44 years driving trucks, 40 of them with URM. He’s also no stranger to adventure. At age 15, he and his 17-year-old brother loaded up a 1940 Chevy and drove to Mexico and back. They car camped along the way.

“Never had a breakdown or even a flat tire,” Eden recalled. Eden is a fan of things that are well-made. He still lives on the family farm he moved to at age 4 and in the same house he and his wife built in 1960.

But being on the road as a truck driver whetted his appetite for more exotic travel. Eden has visited 65 countries, including 15 trips to China and 15 trips to Cambodia. “My last visa for China is good for 10 years,” he said.

Every fall when farm work was done, he and his wife would take off five weeks to explore the world. His favorite destination? “Cambodia – it’s still kind of wild there,” Eden said. “And you can rent a motorcycle for $5 a day.”

That’s right. He may fly to his destination, but once his feet are on the ground, he hits the road. “The best way to see the world is to rent a car. It’s fun! You can stop when you want, see what you want,” he said. “I drove 6,500 miles in Europe. You can cover quite a few countries.”

He’s made a lot of friends in his travels, including a family in Vietnam who invited him to visit their village. No one spoke English, but Eden had a Vietnamese/English dictionary. “Mainly, we just pointed to stuff,” he said. 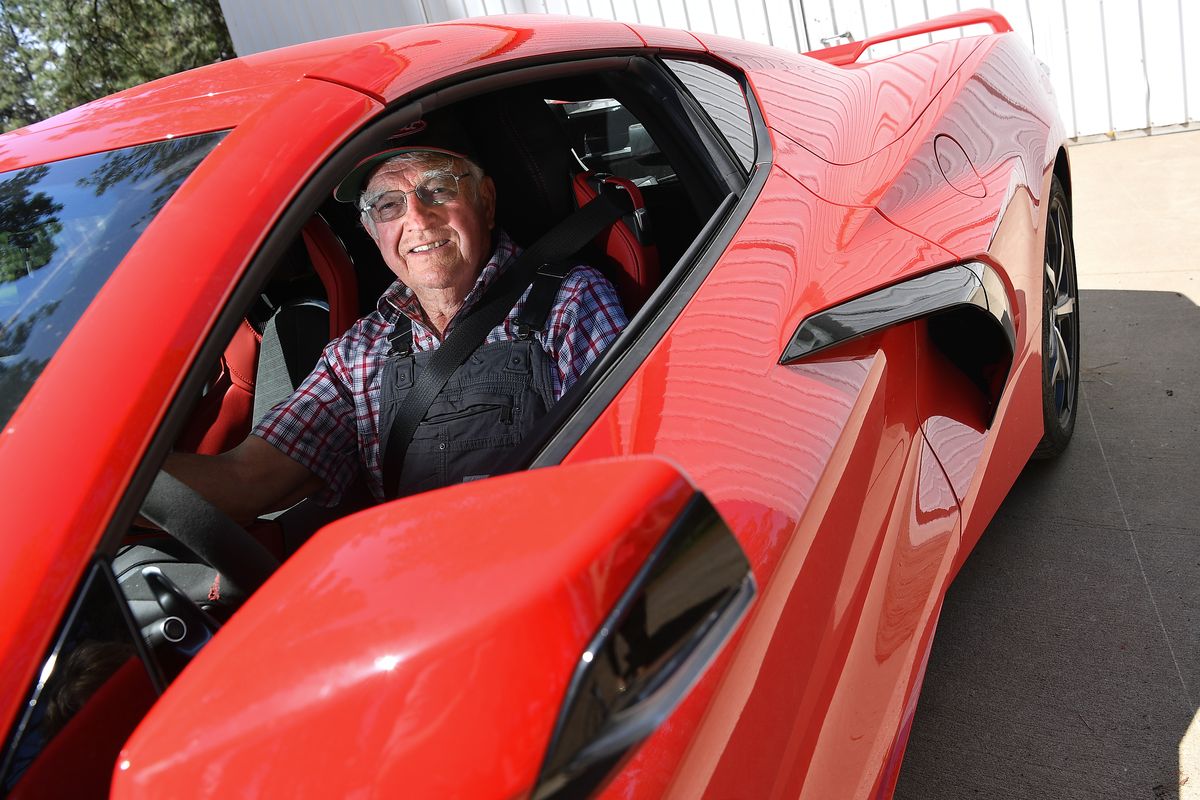 Vern Eden, 87, sits for a photograph with his brand new 2021 C8 Corvette on Thursday at his home in Valleyford. For various reasons, Eden had to wait 18 months until his dream ride was available for picking up. (Tyler Tjomsland/The Spokesman-Review)

The daughter of the family calls him every month. She now speaks perfect English and has married and moved to Australia. “I still don’t speak Vietnamese,” he said. “But I’m looking forward to visiting them in Australia – I’ve never been there.

A family he met in China has visited him several times in Valleyford, and when they visit next, he can show off his new ride. It’s said good things come to those who wait, and Eden certainly had to wait for his Corvette. He ordered it a year and a half ago.

“I got it from Chipman & Taylor Chevrolet in Pullman,” he said. “It’s a small dealership with a good crew.” Originally, he thought he’d get the car in blue to match his truck. “But, red’s a Corvette color,” he said.

A host of delays prolonged the car’s delivery date. A strike at the manufacturing plant. A shortage of needed computer chips. And, of course, a global pandemic.

Eden had hoped to pick it up at the factory in Bowling Green, Kentucky. Then he found out they didn’t allow tours. Instead, he, his son and his grandson picked up the car in Pullman and took turns driving it home.

“It’s fabulous,” Eden said. “It responds to the throttle and has quick steering.” He slid behind the wheel, and with a throaty purr, the Corvette’s 6.2-liter V-8 engine with 495 available horsepower came to life, rumbling in the back, visible through the rear hatch window.

If Eden gets a hankering to feel the wind in his hair, the hardtop can be removed and stored in the trunk. He hasn’t quite figured out all its bells and whistles, but he’s having fun with it on the road.

“It’s a driving car. Not one to put in the shop and look at,” he said. “I used it to get tractor parts. The guy came out and said, ‘Nice parts car.’ ”

Another reason Eden finally purchased his dream car is because he wonders if the 2021 Corvette will be the last in the series before the company converts to an electric model. He shook his head. “That would be like a trumpet player blowing and no sound coming out.”