MINOT, N.D. – When the Empire Builder stopped in this town of about 50,000 for an hour-long refueling break on Tuesday, Athena Larsen and her brother Josh Medlin piled on with her 4-year-old daughter and his two sons, ages 3 and 1.

While Amtrak’s ridership fell sharply over the past year amid the pandemic, the siblings from Kelso in southwest Washington became frequent passengers after Medlin, 35, moved to North Dakota a year ago.

Since then, they’ve each made several 26-hour trips between Minot and Vancouver, Wash., on the route that ends in Portland. (The westbound Empire Builder splits in two in Spokane, with the other half going to Seattle.)

“I feel like a lot of people are kinder on the train, especially with kids,” said Larsen, 33, as her daughter Ryann snacked on blueberries and bounced around the train’s observation car.

“Traveling with kids, you have a ton of bags,” she said. “Trying to pack a car – and you can’t bring as much on a plane – a train is just so much more welcoming for family travel.” 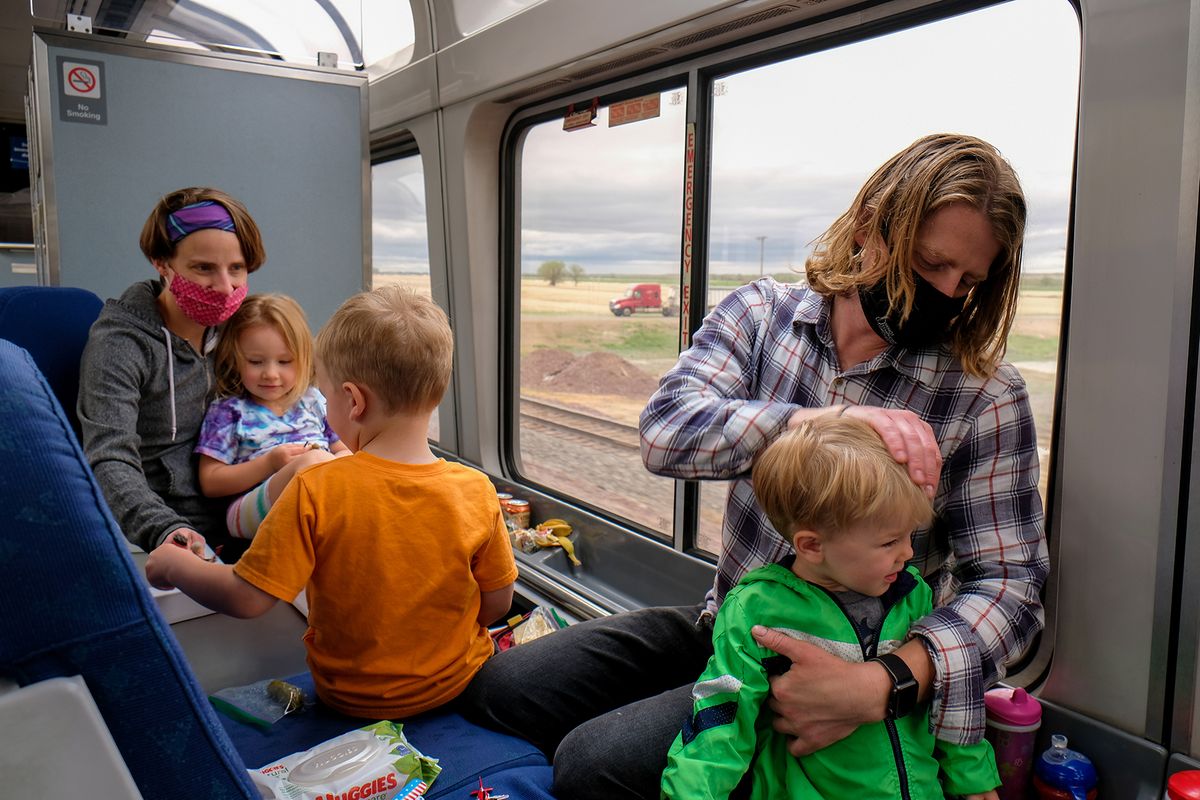 Even before COVID-19 decimated its revenue, Amtrak lost money each year, mostly because of its 15 long-distance routes like the Empire Builder. But for passengers like Larsen and Medlin, the subsidies Congress sends the national railway are worth the investment, and they have allies in the Capitol with major influence over federal transportation policy.

“It gives Americans the ability to connect,” said Sen. Maria Cantwell, D-Wash., “and to travel in a different mode that basically allows them to absorb more of the grandeur and the beauty without the pressure of driving. And for certain families, it’s a really important alternative.”

Cantwell, who chairs the Senate Commerce, Science and Transportation Committee, has fond memories of her father taking the Empire Builder from Chicago to visit her in Seattle.

“He loved it,” she said in an interview Monday. “The last part, you come over the pass, and he used to say it was like the train was flying through the Cascades.”

All those intangible virtues of long-distance train travel – that feeling when a train crests a mountain pass, the sense of awe at the vastness of the country as changing landscapes pass by outside the window – come at a cost. Congress appropriates millions of dollars each year to cover those capital and operating costs.

But rail travel advocates like Medlin say the nation should look at transportation infrastructure as a service that benefits the entire country.

“I think we’re very far behind in investing in train travel,” Medlin said, pointing to the rail infrastructure in Europe and Japan. “I would prefer if they would upgrade this a little bit, make it a little bit faster, and they’re fully capable of doing it. The technology is there.”

Amtrak has never turned a profit

Before the pandemic, Amtrak’s ridership saw steady growth each year, but it was still dwarfed by automobile and air travel.

Amtrak, meanwhile, was created in 1971 after Congress passed a bill to take money-losing passenger services off the hands of private railroads. While technically a private company, it has never been a profitable enterprise.

Within less than a decade, Amtrak started cutting its least profitable routes, including the North Coast Hiawatha, which ran through southern Montana on its way from Chicago to Seattle.

In 1979, Transportation Secretary Brock Adams, who went on to represent Washington in the Senate, eliminated the route because revenue covered just a quarter of what it cost to operate the route in 1978, The Spokesman-Review reported at the time.

“It would be cheaper to buy every Chicago-Seattle rail passenger a free $170 plane ticket and two drinks than it is to operate the Hiawatha,” Adams said at a 1979 event in Spokane.

The National Railroad Passenger Corporation, as it is officially called, is divided into three business units. The Northeast Corridor – which connects Washington, D.C., New York City and Boston – is the only one that operates at a profit, although it has a $31 billion backlog of repairs, and the only stretch of track Amtrak mostly owns.

The rest of Amtrak’s service is divided between routes less than 750 miles long whose costs are shared by state governments, and long-distance routes Amtrak pays for on its own. Those routes operate at a loss, but their infrastructure costs are low because they run almost entirely on track owned by private freight railroads.

“It’s kind of a unique quagmire in the United States,” said Madison Butler, communications manager at the Rail Passengers Association, a group that advocates for better train service.

“We take our private cars on public roads and our public trains on private trackage, and I think it is a uniquely American moment of irony where we have to kind of reconcile our post-industrial state and what the future of infrastructure looks like.”

President wants to pump up funding

President Joe Biden, whose administration is currently on a nationwide “Getting America Back on Track” tour to promote his infrastructure agenda, wants to invest $80 billion to improve Amtrak’s service.

After the White House unveiled Biden’s proposal at the end of March, Amtrak released a map showing how that money could help expand its service to new cities and add more frequent trips.

Ray Lang, Amtrak’s vice president in charge of its shorter, state-supported routes, said that while the map doesn’t include changes in the Northwest, regional transit agencies would ultimately choose how much of the money is spent.

“The state of Washington and the stakeholders in Spokane and along that route would have the say in determining where any short-distance corridor train would be in Washington state,” Lang said. “I think Spokane would be a great market to have expanded service in.”

“One of the major existing problems with the Empire Builder, and indeed many existing routes, is that it serves certain cities in the middle of the night, such as Spokane,” Bowen wrote in an email.

“There also is not enough equipment so the train is often sold out,” he added. “Due to being chronically sold out, ticket prices rise and is a problem for equity with people who have limited financial resources to travel.”

For advocates of better rail travel in the Northwest, help could come from Congress in several forms.

Legislation introduced by Rep. Steve Cohen, D-Tenn., would make it easier for local transit agencies to form interstate compacts to improve regional train service. One such group of Montana counties, the Big Sky Rail Authority, is working to restore the defunct North Coast Hiawatha route, and Bonner County commissioners voted unanimously May 11 to join that effort.

Funding for Amtrak could come through a bill to reauthorize funds for surface transportation, which senators plan to move forward this week, or through a broader infrastructure package Democrats and Republicans are currently negotiating.

While the parties remain far apart, GOP senators increased the size of their proposal to roughly $1 trillion on Tuesday after Democrats lowered theirs to $1.7 trillion.