Donations can be made at vetsgaragespokane.com.

Veterans can call (509) 434-7000 to reach the Spokane VA or visit spokane.va.gov. To learn about programs for veterans in Washington State visit dva.wa.gov

Tucked in a garage on East Pacific Avenue, just a few blocks from busy downtown Spokane, Tzena Scarborough flips down her protective face shield and, with a determined look, digs a tool into the wood she’s turning.

Shavings begin to fly, and Scarborough’s face changes from one of determination to excitement as the feeling her teacher Doug Eaton was describing finally clicks.

The shop is quiet, save for the spinning lathes and the soft sound of a volunteer sanding their own project in a workshop at Vets Garage.

The nonprofit was founded in 2012 to give veterans access to tools, hobbies and camaraderie. Initially, the program was housed in a Spokane County building near the county campus with a $10 monthly lease and space for clinical psychologist Dr. Dennis Pollack to see clients.

The setup was perfect for veterans, many of whom were being treated by Pollack for post-traumatic stress disorder and more comfortable coming in for their appointment with such a relaxed environment from the shop, he said.

Pollack also helped vets at the shop if they had a crisis while working, he said.

“Sometimes in the midst of whatever you’re doing, a crisis could occur,” he said. “It’s better if you’re there to respond at the crisis when it occurs, so you can teach the person how to cope with civilian life compared to military life.” 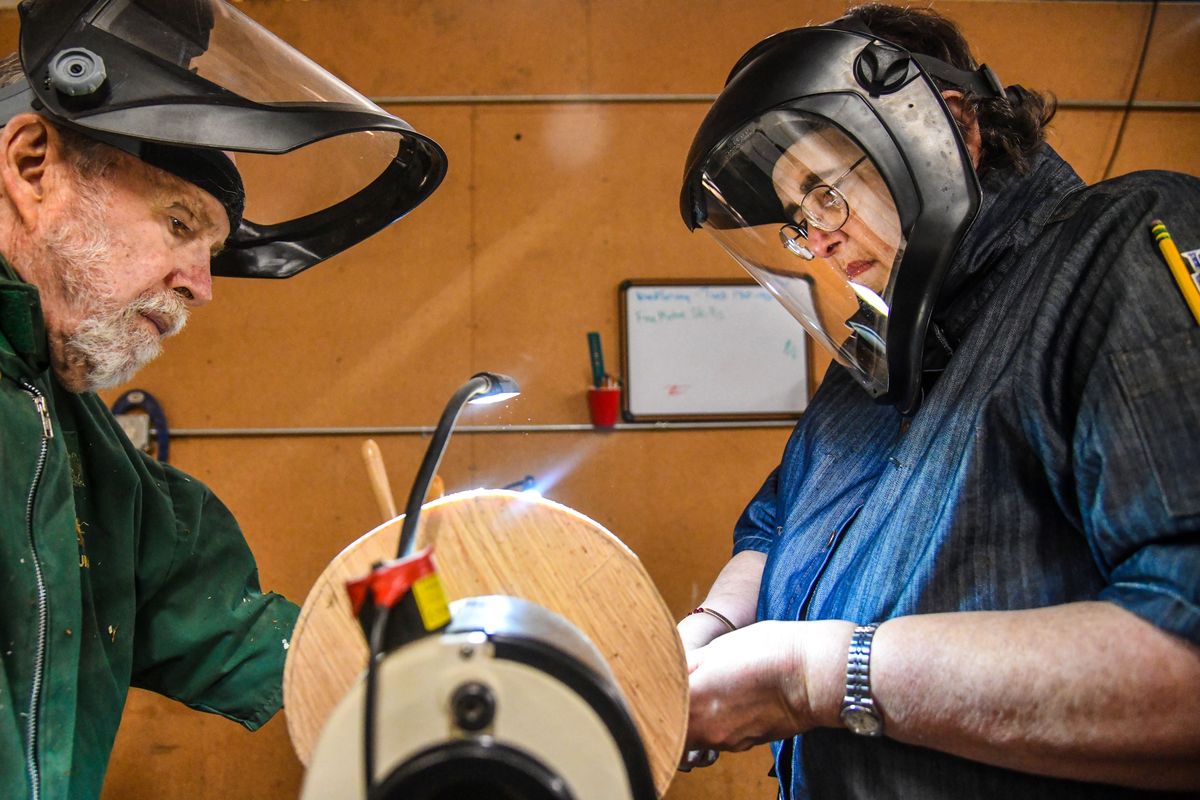 U.S. Army veteran Tzena Scarborough, right, focuses all her attention on a practice piece of wood as she learns under the guidance of Inland Northwest Woodturners President Doug Eaton, Tuesday, May 5, 2021, at the Vets Garage in Spokane. (Dan Pelle/THE SPOKESMAN-REVIEW)

Not only would he be able to help in a crisis, but after a woodworking session, people would just drop by and Pollack would often get them set up with mental health treatment.

The shop needed to relocate, and the group moved around a few times until settling last fall at 224 E. Pacific Ave., conveniently located between two bus stops.

In the shop, members have access to lathes, table saws, band saws, 3D printers and computer numerical control (CNC) machines. Veterans pay $35 a month for unlimited access to the garage, and civilians can pay $50 a month for a membership.

Volunteers like Director of Operations Chuck Elmore and John Pollack, Pollack’s son, help answer questions when the garage is open from 1 p.m. to 7 p.m. on weekdays and 1 p.m. to 4 p.m. on Saturdays.

To help pay the bills at the new garage, they sell wood medallions for each branch of service and do other odd jobs like helping a local Etsy shop.

U.S. Army veteran Tzena Scarborough, right, focuses all her attention on a practice piece of wood as she learns under the guidance of Inland Northwest Woodturners President Doug Eaton, Tuesday, May 5, 2021, at the Vets Garage in Spokane. (Dan Pelle/THE SPOKESMAN-REVIEW)

‘Women are veterans, too’

Every Tuesday and sometimes on Thursdays, you can find Scarborough, 63, hunched over her lathe. It’s the time she sets aside for herself each week, she said.

It took decades of work for her to feel comfortable in her identity as a veteran, she said.

Originally from Okanogan, Washington, Scarborough decided after high school she wanted to see the world.

“There’s not much to do but pick apples and wait tables, and my dad was a teacher, so I couldn’t inherit the job,” she said. “I wanted to travel and see the world and get an education.”

The army had recently opened up new jobs to women, and Scarborough was one of the first to work with Cobra Helicopter weapon electronic systems. Basically, her job was to make sure the missile went where it was supposed to , she said.

But since her service was during the Cold War, “there wasn’t a lot of work to do” in that job, Scarborough said.

In 1979, while stationed in Germany, she did quality control and ran a computer work station.

When she re-enlisted, Scarborough was stationed at Fort Eustis in Virginia, where she wrote soldiers manuals. She was the only woman there with about 80 men.

Being so isolated was difficult, so she asked to be stationed back in Germany. When she got there as a Sergeant E-5, she was the highest-ranked female of the approximately 2,000 troops on the base.

“I don’t regret the Army,” she said. “It was a little harder being the only female and not being listened to and heard … and even when I told troops to do something, they didn’t do it.”

Women weren’t allowed to be in combat at the time, a rule that didn’t change until 2013.

At her first noncommissioned officer meeting at that base, Scarborough said she was criticized because she couldn’t go on the mission.

Beyond that, her supervisors wouldn’t support her, Scarborough said.

“This is my rank,” Scarborough said, gesturing to her collar. “It’s not my gender.”

She decided to get out of the Army after 71/2 years, despite hopes of making it a career.

“I felt kind of angry,” Scarborough said. “I was frustrated because I wanted to stay in.”

After leaving the “hostile work environment” of the military, she went to college but struggled with depression and anxiety.

It took her nearly a decade to be comfortable even going to the VA because she felt so disconnected from other veterans.

“I felt invisible” as a veteran, she said.

By the 1990s, she was working on her mental health and decided to volunteer at a veterans event at the Spokane Arena. She was wearing an army hat, and someone came up to thank her for her service for the first time.

“It was an affirmation that somebody recognized me in uniform, that I was a veteran,” Scarborough said.

She started her own business, Are You Going Ape With Your Computer, that helps teach older adults to use their computer at home.

“Being self-employed helps a lot,” she said .

Since then, Scarborough has joined the American Legion and begun helping other veterans, especially to help women get help and be proud of their veteran status.

“It validates my service,” she said of helping other vets. “And it validates that women are veterans, too.”

Now, Scarborough is on the Eastern Washington Veterans Task Force and the Women Veterans Advisory Committee for the Washington State Department of Veterans Affairs. She spends much of her time volunteering to help veterans like herself, often telling them to find ways to de-stress like she did in woodturning.

“I’m always helping, and that’s something I realized a few months ago, so I said, ‘Tzena, you need to do something for yourself, come hell or high water,’” Scarborough said.

She had always wanted to work with wood, but when she was in high school, “girls didn’t do wood shop,” Scarborough said.

So last year, she began taking classes from Eaton. Wood turning takes absolute focus, and you can’t overthink while doing it, Eaton explained.

“I slow down and stop thinking,” she said.

Two lives into one

In military life, you yell a lot, but that’s often not an acceptable way to express frustration in the civilian world, Pollack said. There is a lot more gray area in civilian life, he said.

Most of the veterans Pollack treats have PTSD, he said. In general, people who suffer from PTSD, he said, don’t recognize when they’re getting upset.

“What you try and do with many veterans, just depends on the situation, is teach them how to calm down on their own,” Pollack said. “PTSD changes you.”

At Vets Garage, where Pollack sees patients in the morning before the shop is opened, veterans often feel more comfortable than with civilians.

“The thing about veterans is, they’ll trust one another, even if they don’t like one another,” he said. “They always feel the other person has their back.”

The camaraderie and the activities at the garage are calming, he said.

“If you’re turning wood, you cannot take your eye off what you’re doing or that piece of wood is going to fly off and you’re going to get injured,” Pollack said. “They like that because they know they need to stay focused and can’t drift.”

Around their fellow veterans, who have been through similar situations, they may feel more comfortable talking about things they never would talk about at home, Pollack said.

“The idea that you can go someplace and feel safe,” Pollack said.

For the last few years, Vets Garage has been struggling to make ends meet, with small donations and higher rent at the new, more central location, coupled with the COVID-19 pandemic shutting the doors for a period.

While Pollack can’t be on site in the way he used to and they struggle to make ends meet, the program still has an impact on the people it serves.

“It’s camaraderie here,” Scarborough said. “It’s a place to come do your own thing.”