Vic B. Linden and Sons used to span storefronts across Spokane. Now, after 75 years, the brothers who took over their parents’ hand-painted sign business have decided to retire. 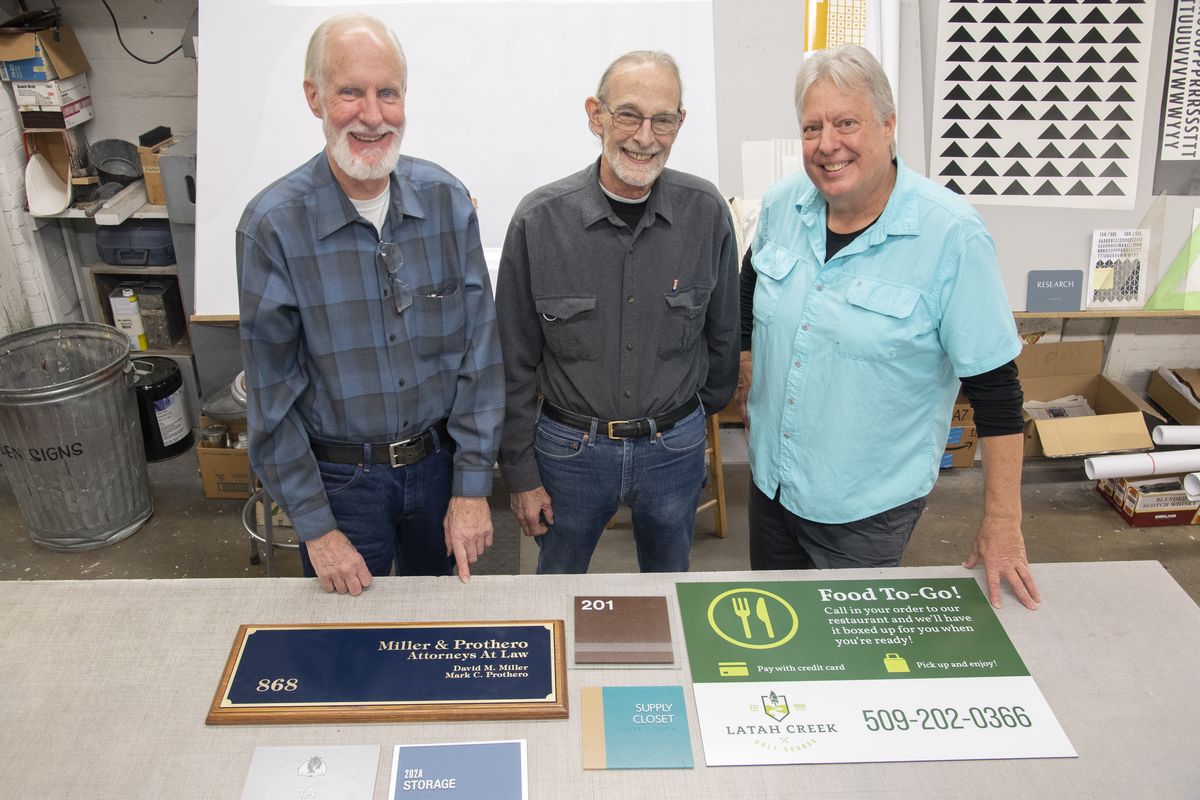 Brothers, from left to right, Nick, Chris and Steve Linden have run Vic. B Linden Signs in Spokane for many decades, following in their father’s footsteps, shown Monday, Oct. 25, 2021 at their shop 122 S. Lincoln St. The brothers plan to shut the business down because they can’t find a buyer for it. The brothers have been working in the business since the 1960s and are experts in the many processes of making signs, including woodworking, metalworking, screen printing, computer printing and many other processes. (Jesse Tinsley/THE SPOKESMAN-REVIEW)

“We just feel like we’ve done our dues, and we need to go do something fun – not that we don’t enjoy the sign business,” Nick Linden said.

The brothers have to be out of their building, which has housed the business since their father Vic Linden acquired it in 1952, by the end of the year. Nick said they have not yet started the long process of packing up their art supplies, equipment and stencils.

Boxes cover nearly every inch of the shelves in the shop. Filing cabinets with pre-made stencils for returning customers are filled with the stencils of over 70 years of business.

Paintings from their father they found in the attic lean against several walls. A piece of steel – painted bright green and cut in the shape of Washington state – fills the length of a wall in the Linden brothers’ office.

Their father’s old paintbrushes, some from as far back as 1946, sit atop an office shelf. They were maintained well and are still usable, Nick Linden said.

“Perfection really was everything to him,” said Chris Linden, the youngest of the three brothers.

Nick, Steve and Chris Linden started in the shop when they were teens in the early 1980s. By that time, Nick said, their father “was the guy” for hand-painted signs.

Nick Linden said his dad worked until he could not anymore, when he started to show symptoms of dementia. When he was younger, Nick said his dad often got up before the others to be in the shop and then stayed up painting late into the night. He was nearly always working, Nick Linden said.

“I remember Grandma had a cabin and every weekend in the summer we would be up there, and I know that was Mom in a nice way forcing Dad to take some time off,” Nick Linden said. “He was a hard worker. He was a workaholic, honestly.”

As decades passed new technology might have posed a threat to a hand-painted sign business. While it’s true the customer base in 2021 is looking more for digital art, Chris Linden said, they were able to adapt as a business.

In recent decades Linden Signs was making signage for bathrooms, professional offices and accessibility stalls. They mostly use stencils and paint for the signs, and each one comes with raised alphabetical and Braille lettering.

“Not a lot of businesses do hand-lettering anymore,” Chris Linden said.

Retirement does not mean the end of artistry or painting for the Linden brothers, but Steve Linden said he was ready to spend time at home with his wife, whom he married three years ago. He had a car hobby he was not able to pursue for a while, so he’s ready to get to work on those projects.

“I need to go home and fix the last 50 years of not taking care of anything,” he said.