A GRIP ON SPORTS • Our long regional trauma is over. No, not that one. We’re still dealing with a pandemic. But the stretch without college basketball, the sport in which the Inland Northwest excels, is finished. Finie. Finalizada. Biagta if you speak Lithuanian. Three of our four Division I men’s programs play real games today.

• Washington State tips it off with a noon contest with visiting Alcorn State. (If you are wondering about the weird start time, there is a reason. The Pac-12 Networks are showing every first game of every school today, which makes strange times inevitable.)

Gonzaga’s tip is at the more normal 6 p.m. and it’s on KHQ. The usual crew of Greg Heister, Dan Dickau and Richard Fox will be on the call. The opponent? Dixie State of Utah, for the second consecutive season fodder for the nation’s top-ranked team. 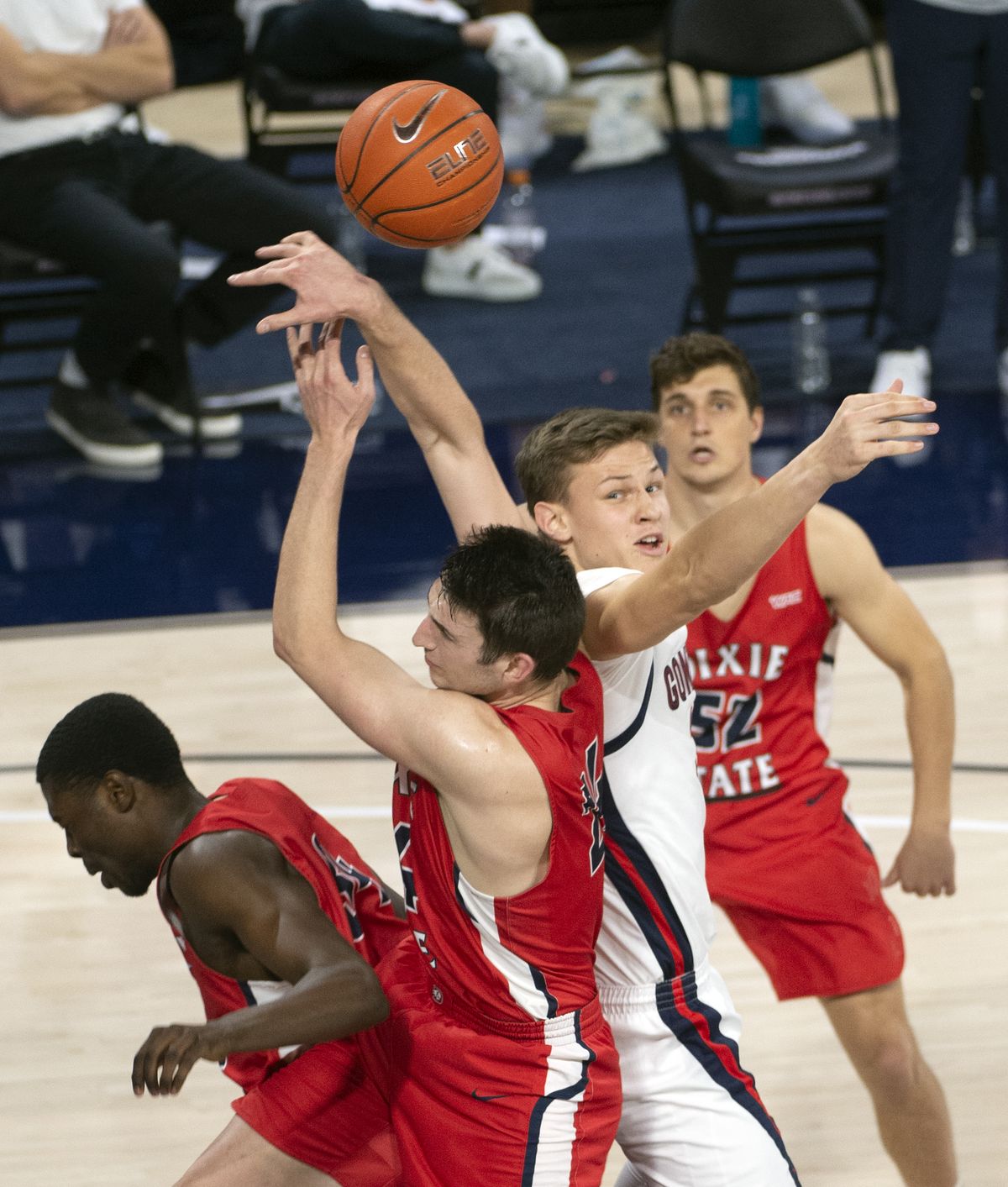 Comparisons are inevitable, seeing that GU romped 112-67 about 10 ½ months ago. Since that time, the Zag roster has turned over to a large degree, with three former starters now playing professionally and three reserves either graduated or playing elsewhere.

Their spots have been filled, of course, but we begin to find out tonight – and even more on Friday when fifth-ranked Texas comes to town – if transfer Rasir Bolton, touted freshman Chet Holmgren and the rest of the “Diaper Dandies” can replace Jalen Suggs, Corey Kispert,  Joel Ayayi et al.

The Zags are young. In a chance conversation with Mark Few over the weekend, he emphasized just how many freshmen they have. The precise number is six, with five expected to be in the rotation. That’s a lot for, say, Kentucky or Duke, let alone Gonzaga.

Execution is a hallmark of Few’s teams, usually built through the presence of at least two or three starters who have been in Spokane for a few years. Timme is the old man of the starting group and he’s in his third season. Senior Andrew Nembhard is the only other starter with even two years experience.

How all the new players mesh on the court – and with Few, who won’t be on the sidelines tonight as he finishes his DUI-forced suspension – will tell the tale of this promising season.

At WSU, there is more experience returning but the Cougars are still young. Only four players who may even sniff the court have three years in Pullman, with the rest, no matter their age, either in their first or second fall on the Palouse.

Kyle Smith showed last year he’s able to find spots for any number of disparate talents. He doesn’t try to shove round pegs into square holes; he changes the shape of the hole. This year he’ll be figuring out how to modify the board probably up until the Pac-12 season begins.

Eastern Washington has its opener on the road, facing Nevada in the biggest little city in the world. New coach David Riley will hope his rebuilt team will play bigger than expected against the Wolfpack. The Eagles do not play in Cheney for nearly a week. That is a long time for their fans to wait. But we have been waiting for months for college basketball to return, right?

It all starts, for real, today. 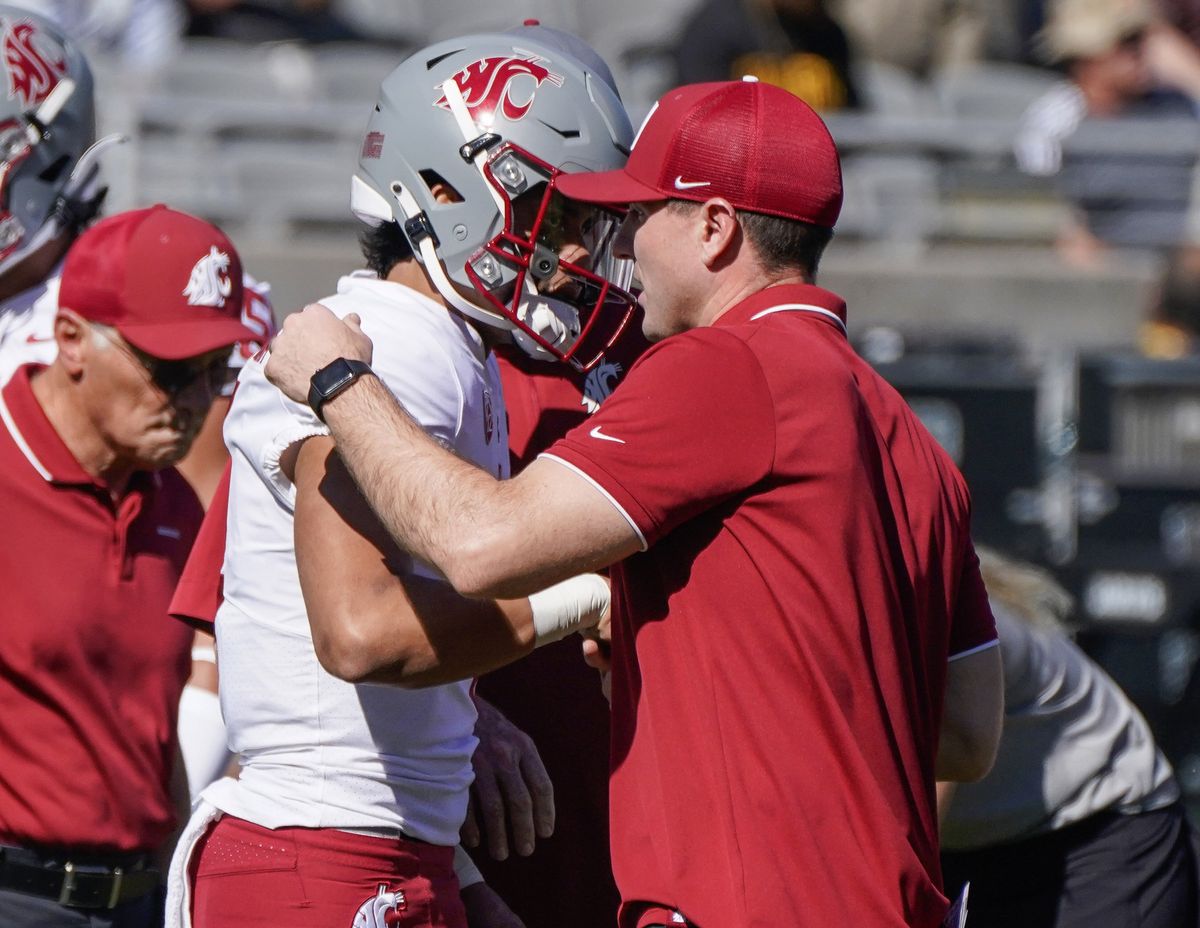 • We want to go on the record. Not only do we believe the Washington State Cougar football team will cover the two-touchdown spread this Saturday in Eugene, we also believe it will upset No. 5 Oregon and win outright. And, yes, we have reasons, not just a hunch.

– Oregon played a physical rivalry game last weekend in Seattle. And it played out like one, including the Ducks trying to score as the clock ran out in a 26-16 win. Nasty words ensued.

– Next week the Ducks travel to Utah to face what everyone says is their toughest test of the conference season. Look up “trap game” in the Sports Cliché Dictionary and the WSU/UO game will be the example.

– The conference really needs Oregon to win out and make the college football playoff (they are ranked in-the-playoffs fourth by the committee going into tonight’s re-ranking). Pride is important. So is the money. It would be just like Washington State to pull an upset, kill the Ducks’ chances and tick off everyone else in the Pac-12.

– Finally, the Cougars, who had an extra week to prepare, have played well lately. Add it all up and we get one of the most-impactful upsets in WSU history. And, as an extra-added attraction, the full-time head coaching gig for Jake Dickert. 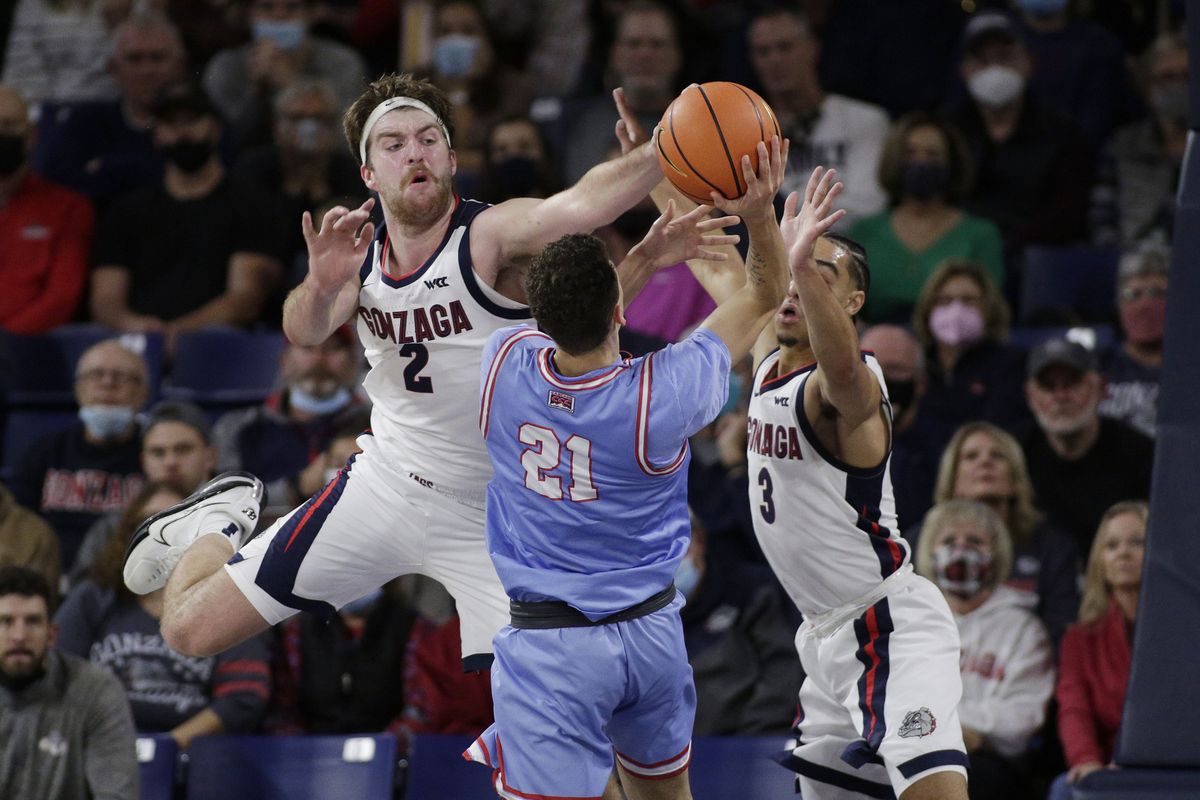 Gonzaga: Jim Meehan gets the day started with his preview of tonight’s game with Dixie State. He also has his key matchup, which features the Trailblazers’ Cameron Gooden. … Jim also spoke with Larry Weir for the latest Press Box podcast. … Earlier yesterday, Theo Lawson covered the news three Zags – Timme, Nembhard and Holmgren – were named to the preseason Naismith Trophy watch list. … The Zags are still the choice of The Athletic to win the national title. … Around the WCC and college basketball, is Holmgren the nation’s best freshman? Or does Duke’s Paolo Banchero, the Seattle native, deserve that preseason accolade? … Saint Mary’s is really experienced and has one key addition. … BYU is the same. The Cougars, however, are not long for the conference. 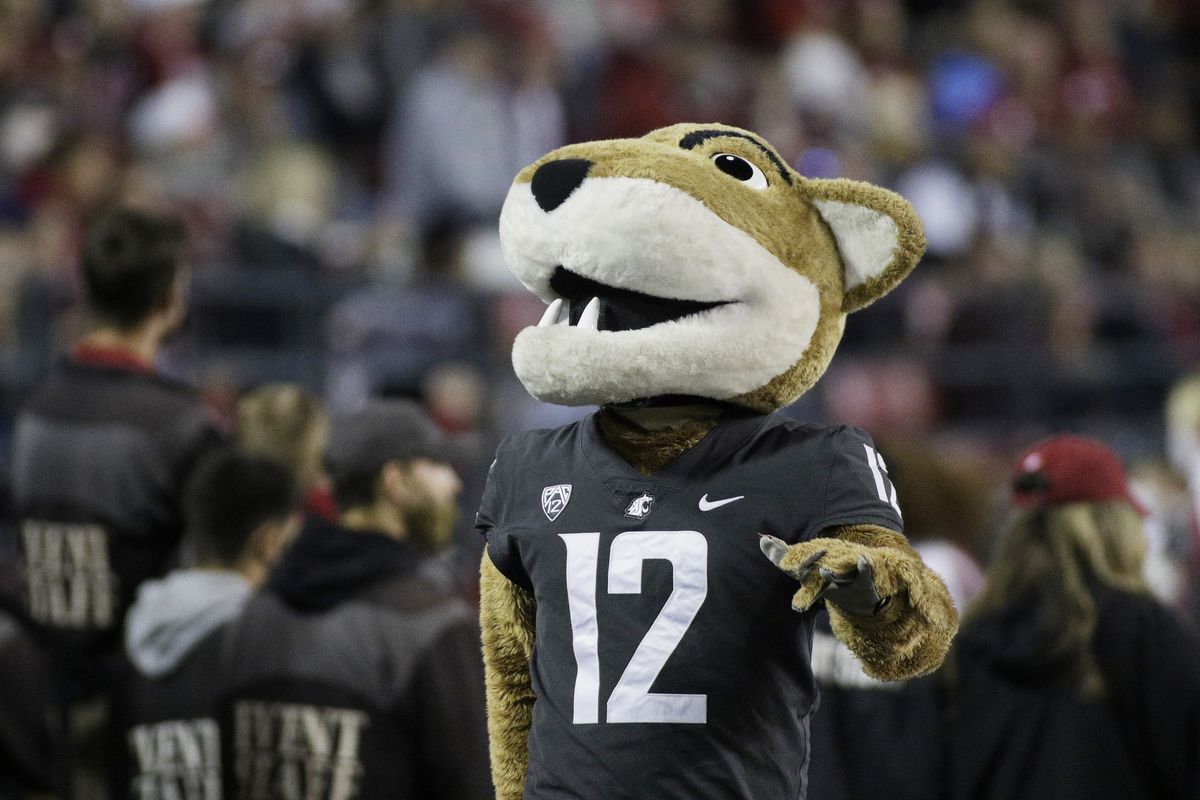 WSU: If you were wondering, the Apple Cup on Friday, Nov. 26, will kick off at 5 p.m. It will be on FS1. Colton Clark has that story. … He also has his first look at Oregon. … Want a preview for today’s opening basketball contest? Colton has that for you as well. … The WSU women will host an NCAA soccer tourney first-round match Saturday at 5 p.m. They play Montana. … Elsewhere in the Pac-12 and college football, Jon Wilner has his power rankings and a suggestion for UW. Both are in the Mercury News. … Washington coach Jimmy Lake has been suspended one game – Saturday versus Arizona State – without pay after a sideline incident during the loss to Oregon. Whether he will actually return in a week is still to be determined. The North Central High graduate has made some bad decisions lately. … The Sun Devils will be playing their third consecutive game against a team with an interim head coach. They are 1-1 so far. … It’s sort of sad to hear Oregon State thought a coaching change was an opportunity to improve. … Colorado’s offense has improved but it lost a key player last weekend…. Utah’s coach, Kyle Whittingham, is just one win from being atop the school’s all-time list. The Utes face Arizona, which will have to deal with its losing streak for years. The Wildcats have a quarterback in Will Plummer who is really tough. … So is UCLA’s Dorian Thompson-Robinson, but his thumb may not be. … Maybe USC will pick a darkhorse candidate as coach. … In basketball news, Arizona begins against Northern Arizona. Tommy Lloyd has a chance for his first win as a head coach. … Colorado hosts dangerous Montana State. … USC has a new look but expectations are still high. … Not as high as UCLA, who many believe could win a national title. The Bruins may be down two players though. … Utah wants to run to a title. … Oregon starts the season ranked 13th. … Oregon State hopes it has improved through its exhibition games.

EWU and Idaho: Around the Big Sky, third-ranked Montana State has sold out its stadium for Idaho. … In basketball news, Montana opens against Dickinson State.

Whitworth: The Pirate volleyball team was selected for the NCAA Division III tournament. Taylor Newquist has more in this story. 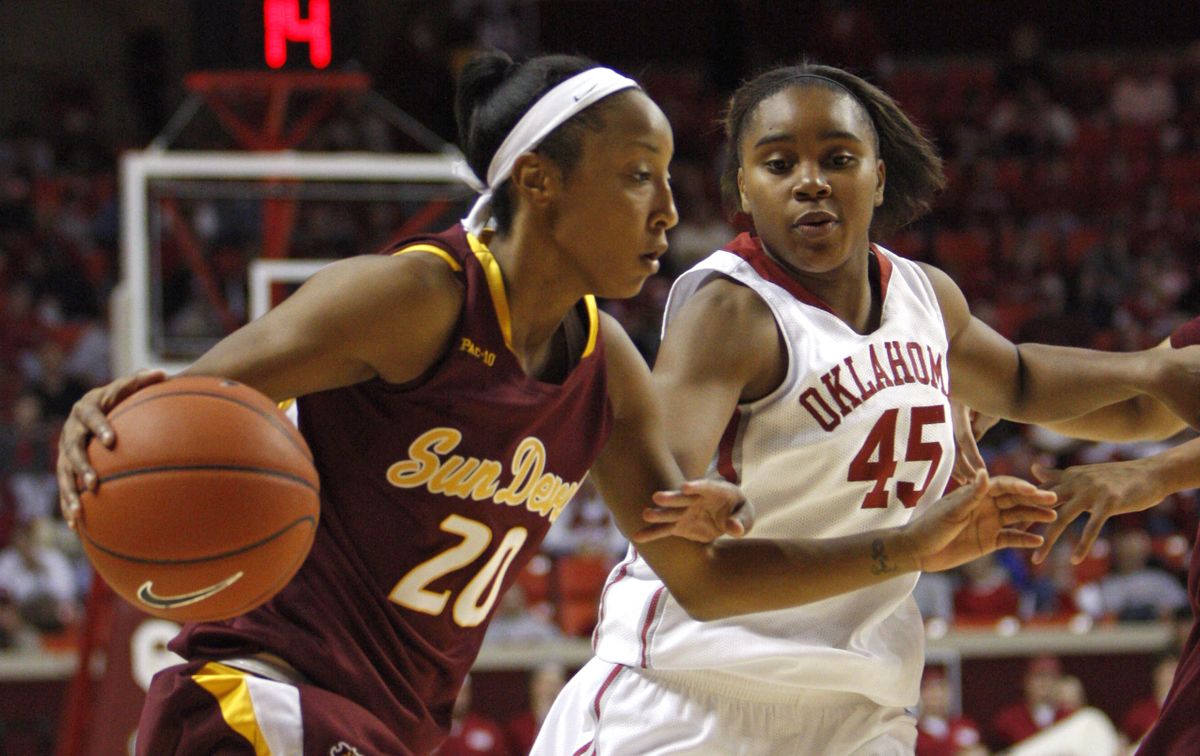 Preps: Gonzaga Prep finished with the second-best RPI in 4A girls soccer. The Bullpus were seeded fifth in the State tournament. Dave Nichols has that and more in this tourney preview. … As we have mentioned before, former Lewis and Clark High star Briann January will have her number retired at Arizona State. That news nugget leads a local briefs column.

Indians: Changes are coming to Avista Stadium. Somewhere in the neighborhood of $23 million worth of improvements in the next four years. Most are slated for the players, something Major League baseball is demanding. Others will be for the fans – including two proposals we believe would be exceptional. Colin Tiernan has all the details in the story. 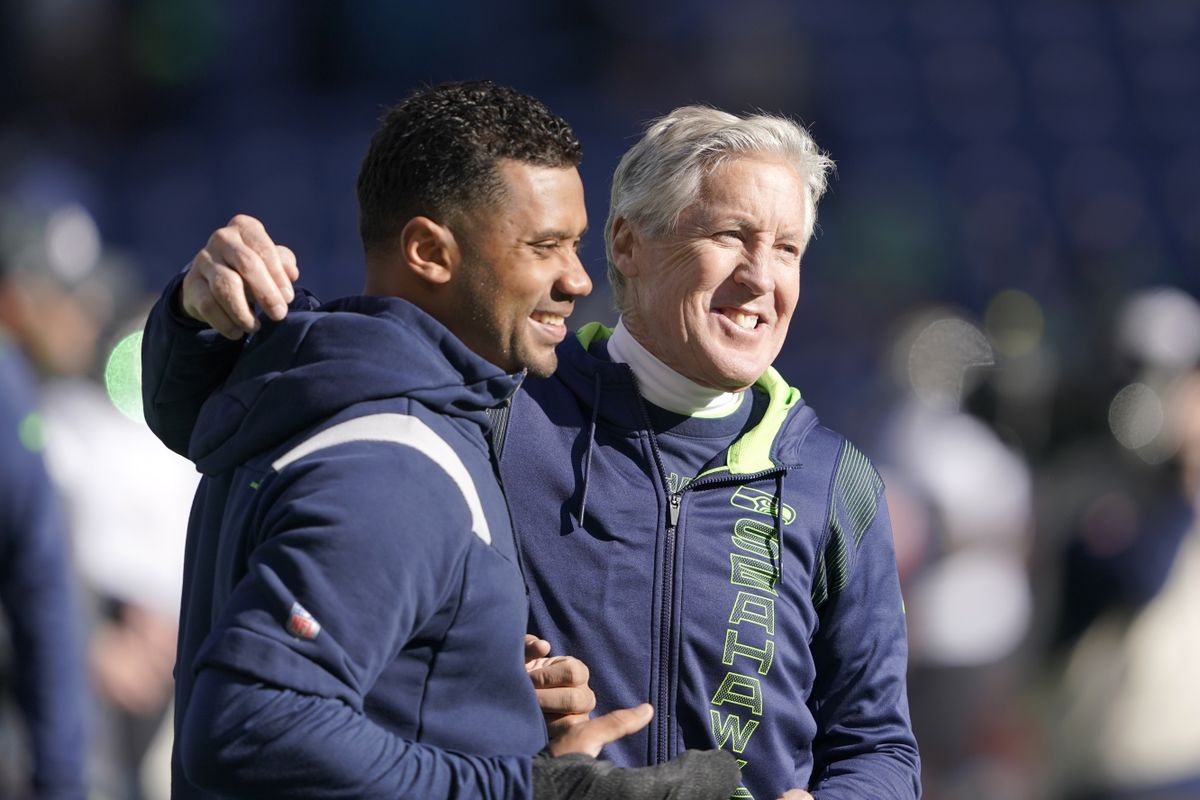 Seahawks: Russell Wilson is back. The finger is healed, he’s been cleared to play and he practiced yesterday. Next up: A trip to Green Bay where the question is, who will be the Packers’ quarterback? … The other news from Monday? Pete Carroll left the door open for Odell Beckham Jr. Now that’s interesting.

Mariners: Scott Servais is a finalist for American League manager of the year. We hope he wins. After all, he’s had to lead a team with little hope for years and he was able to instill it. … This may just be the most critical offseason in club history. It also could be the most disappointing. After the past two decades, we haven’t decided which way to lean just yet.

Kraken: The loss to Arizona was a crusher.

• Had to stay up a bit later last night due to circumstances and responsibilities. Will have to do the same tonight, as we are tasked with our first TV Take from Gonzaga’s inevitable march – according to a whole bunch of experts – to a national title. Why are we sharing this? Mainly because, darn it, we woke up at the usual time – we have dogs you know – and am a bit exhausted. All the typos above? That’s the exc, er, reason. Until later …