A GRIP ON SPORTS • Is it really only Wednesday? How is that possible? So much has happened this week, it seems as if we should be sitting in front of the TV, watching ESPN and searching for the Cougar flag in the crowd.

• We’ve had a week’s worth of news, and more, already. So much, in fact, I am tempted to recount it. And, looking at my waist, it’s obvious I’m not very good at avoiding temptation. 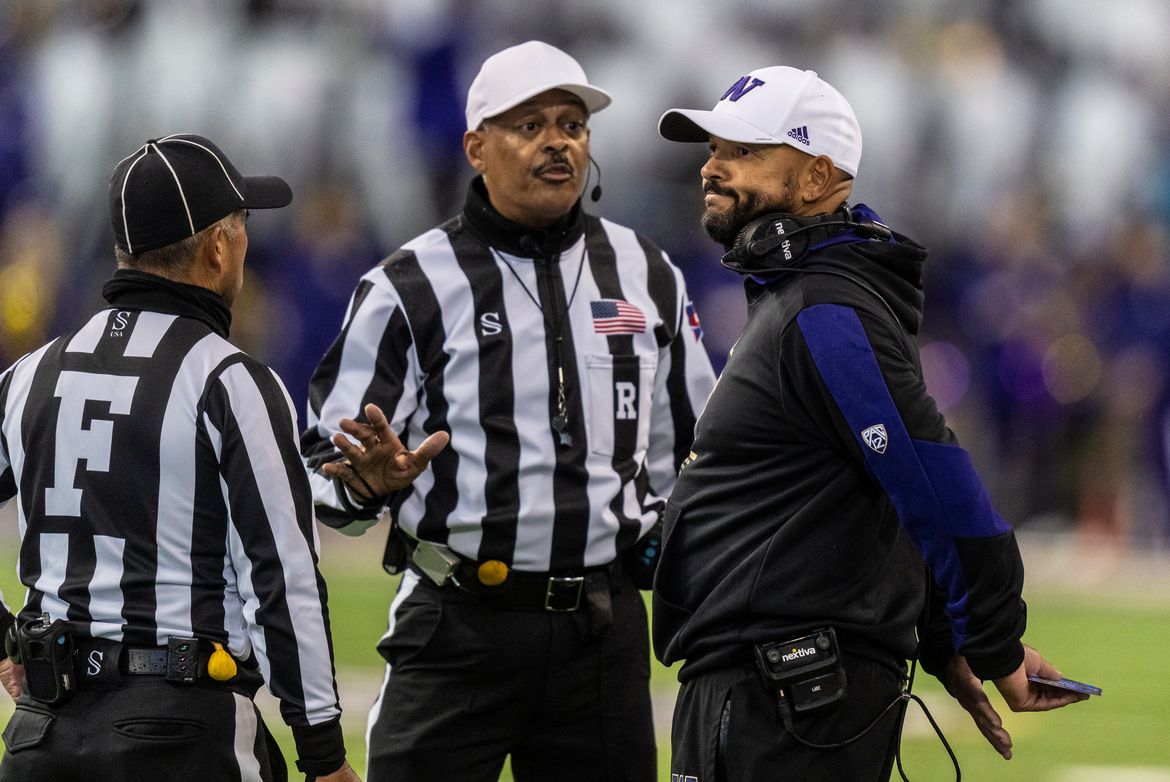 – It seems pretty clear the Apple Cup this season will feature two interim coaches. Heck, even the year a little more than a decade ago, when UW came in winless and WSU had one win, both coaches were still in place – though Ty Willingham was just as good as gone.

This year one interim coach is already assured. Jake Dickert took over from the fired Nick Rolovich last month and quite possibly could be hunting the permanent job the day after Thanksgiving. On the other side of the state, Washington’s Jimmy Lake is on suspension currently – Bob Gregory will be in charge this week against Arizona State – and his employment is, seemingly, hanging by a thread.

When laid-back Seattle Times columnist Larry Stone is calling for a change, then there is little chance Lake can hang on.

The Husky situation all came to a head in the past four days, starting with a sideline shove and a 10-point home loss to Oregon. Three sunsets later, the awfully short Lake era at UW seems to be setting as well. 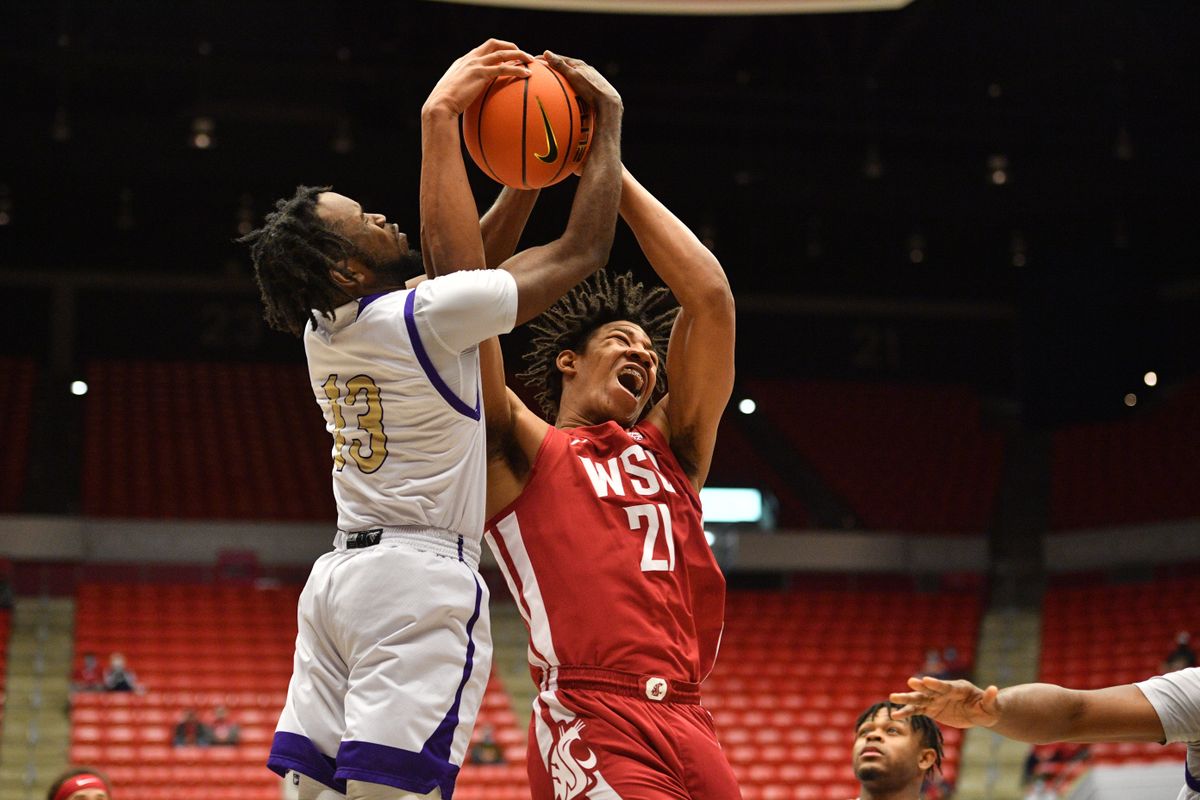 – The past 24 hours had more action than a Jack Bauer reunion movie. And all of it on the basketball court. Yesterday we sat in our kitchen, eating lunch and watching Kyle Smith’s highly touted Washington State team play. The Cougars are certainly talented. Long and athletic. Energetic. Just how all the myriad of pieces will fit together, that’s a question. But Smith has shown he can do it. He has before at Columbia and San Francisco. And, a little bit, last year in Pullman.

That season would have been even better if freshman point guard Jefferson Koulibaly hadn’t gone down with a season-ending injury before the first tip. At least Koulibaly’s performance yesterday in the 85-67 win over Alcorn State seemed to indicate that. He’s the player that impressed us the most.

Up 195, and six hours later, Gonzaga unveiled its latest top-ranked team. The look is different – gone are most of the outside shooters, replaced by a more balanced attack – but the result should be the same most of the time.

With Drew Timme, Chet Holmgren and Andrew Nembhard as part of the lineup, the Zags aren’t going to lose many games. But what is their ceiling? That’s a bit murky.

One game against an overmatched Dixie State team isn’t enough to make any pronouncements. Heck, even Saturday’s game with fifth-ranked Texas won’t be, win or lose. As young and talented as Gonzaga is, it may take the entire pre-conference schedule to figure out a rotation, to assess its strengths and weaknesses and to determine this groups potential.

– Who would have thought four days ago Russell Wilson would be starting for the Seahawks on Sunday in Green Bay, Aaron Rodgers may not be and, for added measure, Odell Beckham Jr. would be cruising down the field – for the Packers? Or the Hawks?

But that might be the scenario. Wilson is assured of playing. Rodgers still has to test out of the COVID-19 protocols. And Beckham? He forced teams to not claim him on waivers with threats of being a cancer, became a free agent and now seems to be leaning toward signing with Green Bay.

What a weird week it’s already been.

Gonzaga: Welcome to the new world of college hoops. It took the Zags a few years to catch up with the recruiting strategy of the Kentuckys and the Dukes, but they have. Much of the roster is new to town, with a handful of talented freshmen and a couple transfers. That’s not how Mark Few’s won in the past. But it’s the way it will be this year. They started fast last night, especially on defense, and despite a mid-game lull, rolled over Dixie State 97-63. Jim Meehan keynotes our coverage with his game story and difference makers. … Theo Lawson adds a story on Holmgren’s well-rounded game. … Tyler Tjomsland was on the baselines with his camera and has this photo report. … We watched at home and contributed our TV Take column. … The folks in the office put together a recap with highlights. … Earlier in the day, Jim put together this news story on Gonzaga having three Wooden Award watch list members. The Zags were the only school with a trio on both the Wooden and Naismith watch lists. … Jim Allen has this piece detailing the Zag women’s nonconference schedule. It’s good. … Around the WCC and college basketball, Alex Barcello showed why he’s expected to lead BYU, scoring 24 points in the Cougars’ win over Cleveland State. … There are other WCC games covered in the Pac-12 section below. … Santa Clara has experience this season. 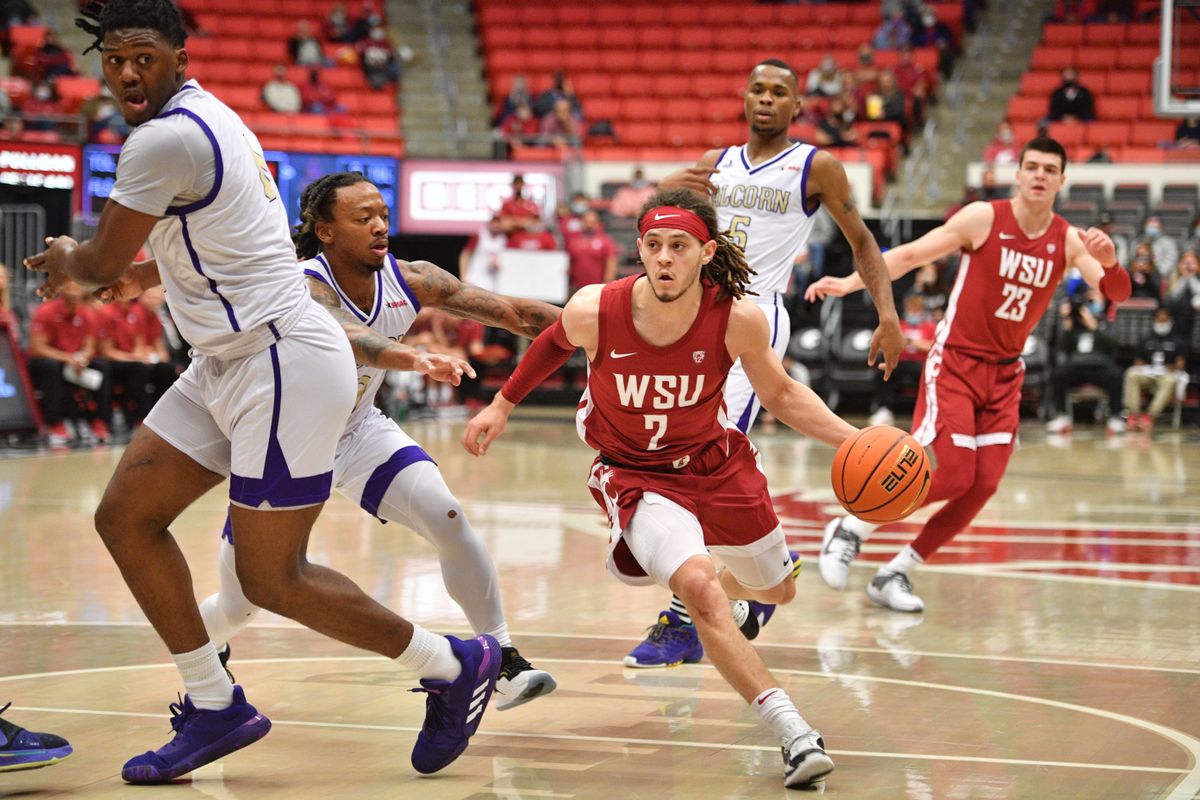 WSU: As we mentioned above, Smith’s team tipped off the season at Beasley Coliseum yesterday. Colton Clark was there and has this game story. … The Cougars’ offensive line is really coming around. Just in time for Saturday night’s showdown at No. 4 Oregon. Colton has that story. … Larry Weir’s latest Press Box podcast features a conversation with radio voice Matt Chazanow. … Elsewhere in the Pac-12 and college football, Oregon moved up to third in the latest CFP rankings but potholes loom. Jon Wilner delves into that in the Mercury News while also examining the conference’s bowl scenarios. … There will be one less game this weekend. The California game with USC has been postponed to Sept. 4 after the Bears were decimated by COVID-19 and its fallout. It seems the school has not been following mandated procedures. The Trojans may have had a key player sitting anyway. … Stanford may have a freshman quarterback making his first start vs. Oregon State. The Beavers are looking to be more efficient on offense. … Colorado’s special team units have been doing well. … UCLA has reshuffled its offensive line. … A Utah star has a strange backstory. … In basketball news, only two conference teams failed to win on Tipoff Tuesday. One of them was Washington, which shot poorly and fell 71-64 to Northern Illinois. Not an auspicious start for a make-or-break season for Mike Hopkins. … The other was California, which lost to visiting UC San Diego. … On the plus side? Arizona gave Tommy Lloyd his first victory as a head coach, running past Northern Arizona 81-52. And then the Wildcats gave Lloyd a soaking. … There was good news and bad news for UCLA. The Bruins won handily but Cody Riley suffered a knee injury. … Utah also won easily over Abilene Christian in Craig Smith’s debut but the stands were nearly empty. … No problems for USC, who crushed Cal State Northridge. … Arizona State handled Portland in Shantay Legans’ debut with the Pilots. … Colorado had to go overtime to get past visiting Montana State. … It was almost as tough for Oregon State against Portland State though the Beavers prevailed in regulation. They did trail for much of the game. … No. 13 Oregon didn’t have any issues with Texas Southern. 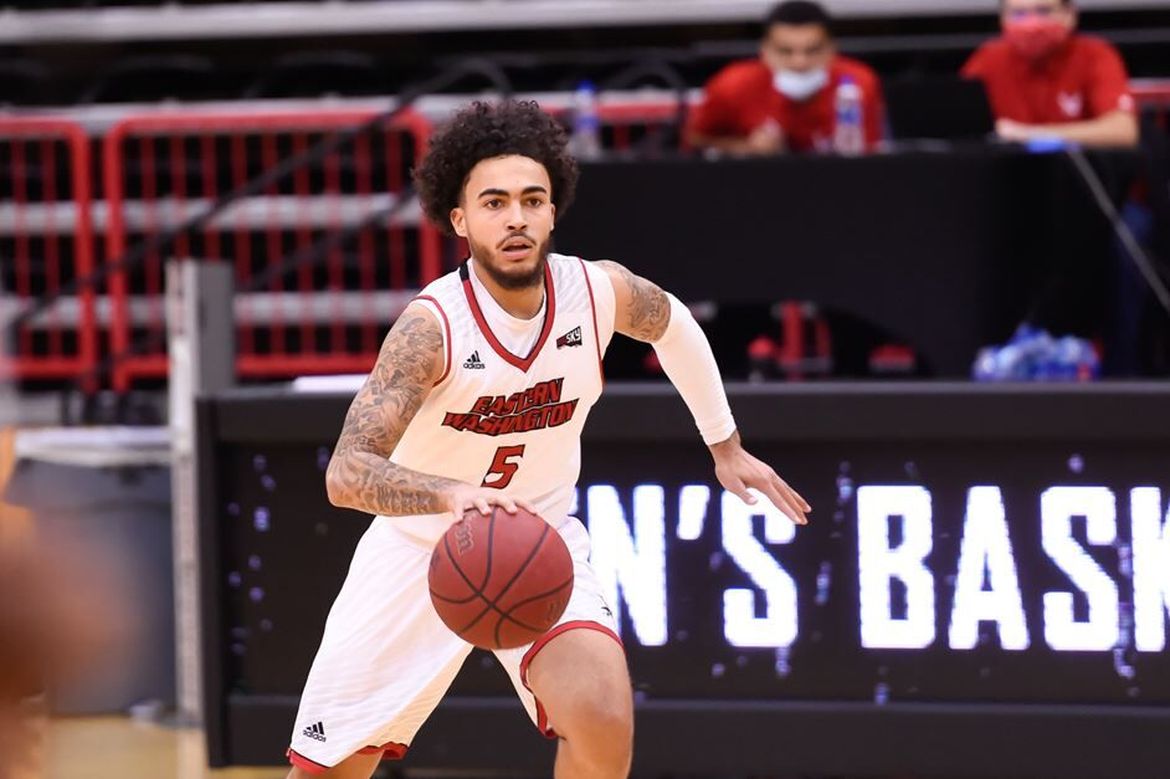 EWU: David Riley’s first game as Eastern’s head coach wasn’t what he wanted. The Eagles faded down the stretch in a 91-76 loss to host Nevada. Dan Thompson has this story. … Around the Big Sky, many of our links to basketball games are contained in the Pac-12 section above. … Weber State began the season by blowing out Western Colorado 100-60. … Montana also routed Dickinson State. … Central Valley High alum Ryan Looney runs an offense at Idaho State that is rare in college hoops. And hard to teach. … In football news, Montana State’s Nate Stewart is finally on the field. … Montana has thrived on the road, with another game set at Northern Arizona. … The FCS landscape is changing fast. 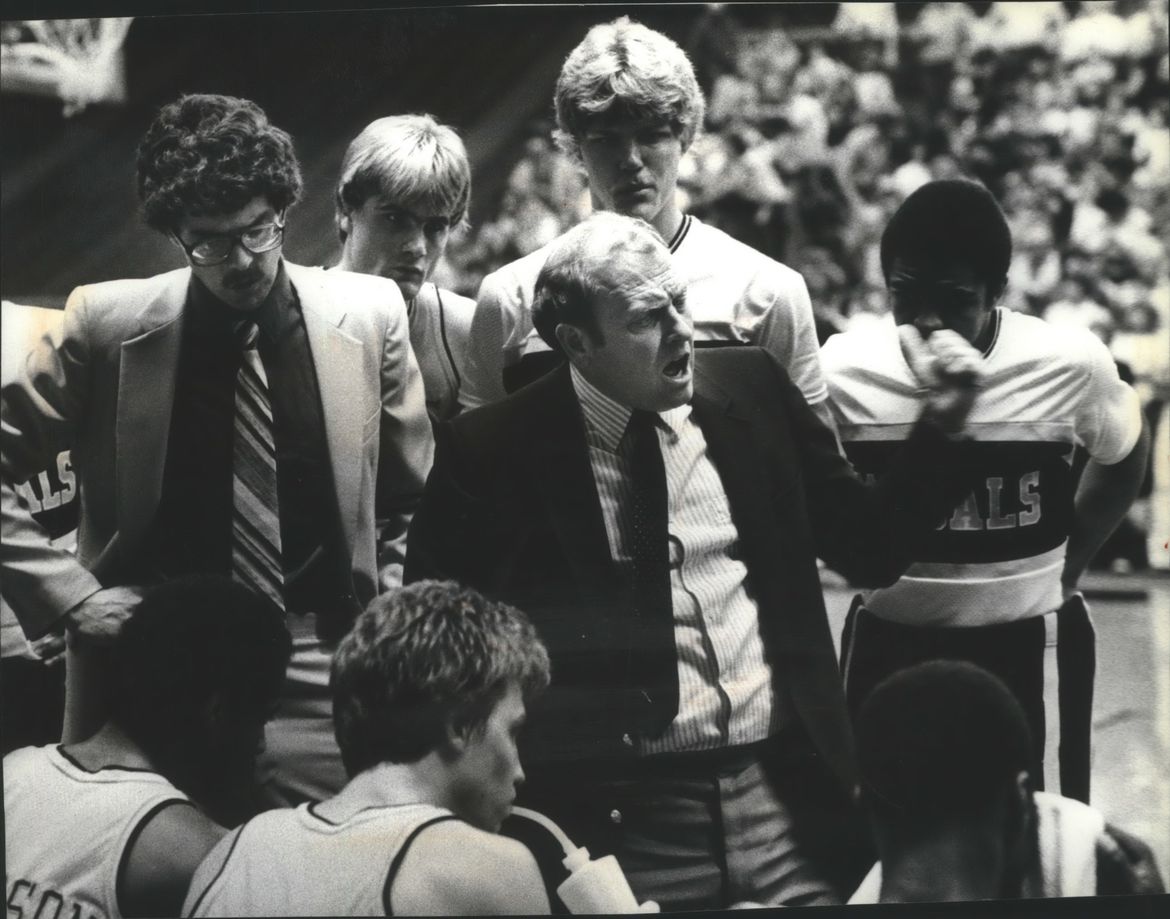 Idaho: The Vandals start their season tonight by hosting Long Beach State. Not only is UI opening its new ICCU Arena, it is also welcoming its most successful coach ever, Don Monson, into the rafters with a banner. But that’s not all. Monson’s 1982 team will be honored, a team the visiting coach, Dan Monson, knew extremely well. John Blanchette delves into all of the hoopla in this column.

Preps: Dave Nichols has a roundup covering all the postseason action in a couple sports.

Seahawks: The Beckham news seems to be all the rage but it also looks as if Chris Carson will return to practice today. … The stretch run looms.

Mariners: Jerry Dipoto spent over an hour speaking with the media yesterday and the Times’ Ryan Divish boils down what he said in this story.

Kraken: Seattle suffered another road loss, this one 4-2 in Las Vegas.

• Happy birthday Steve. It seems like only yesterday you were young, thin and prematurely gray, stepping into the left-handed batter’s box to start every at-bat with a 0-2 count. Now only one of those things is true. At least you were smart enough to take up golf in your golden years. Enjoy your (whatever it is) birthday. Oh, we know all right. We’re just don’t think it is polite to share a number that high. Until later …