The new Liberty Park Library isn’t just full of books – it is itself a story.

It starts with tales of the community center busing kids to the library downtown instead of the library branch next door, where the meetings rooms were too small and the building “just didn’t work for what the community wanted,” Spokane Public Library Executive Director Andrew Chanse recalled.

It ends with a new library in Liberty Park, designed to serve as a community hub.

“We’re here today because we listened to the community,” Chanse said.

City and library officials gathered Friday to celebrate the opening of the all-new Liberty Park Library.

Liberty Park is the second new branch opened by Spokane Public Library in as many weeks, as the renovated Shadle Park Library opened on Nov. 3.

Both are part of the same $77 million bond, which is funding the renovation or construction of numerous library branches throughout the city.

Friday’s opening ceremony was a momentous occasion for Spokane City Councilwoman Betsy Wilkerson, who lives in East Central and looked back on childhood memories in Liberty Park where the library now stands. 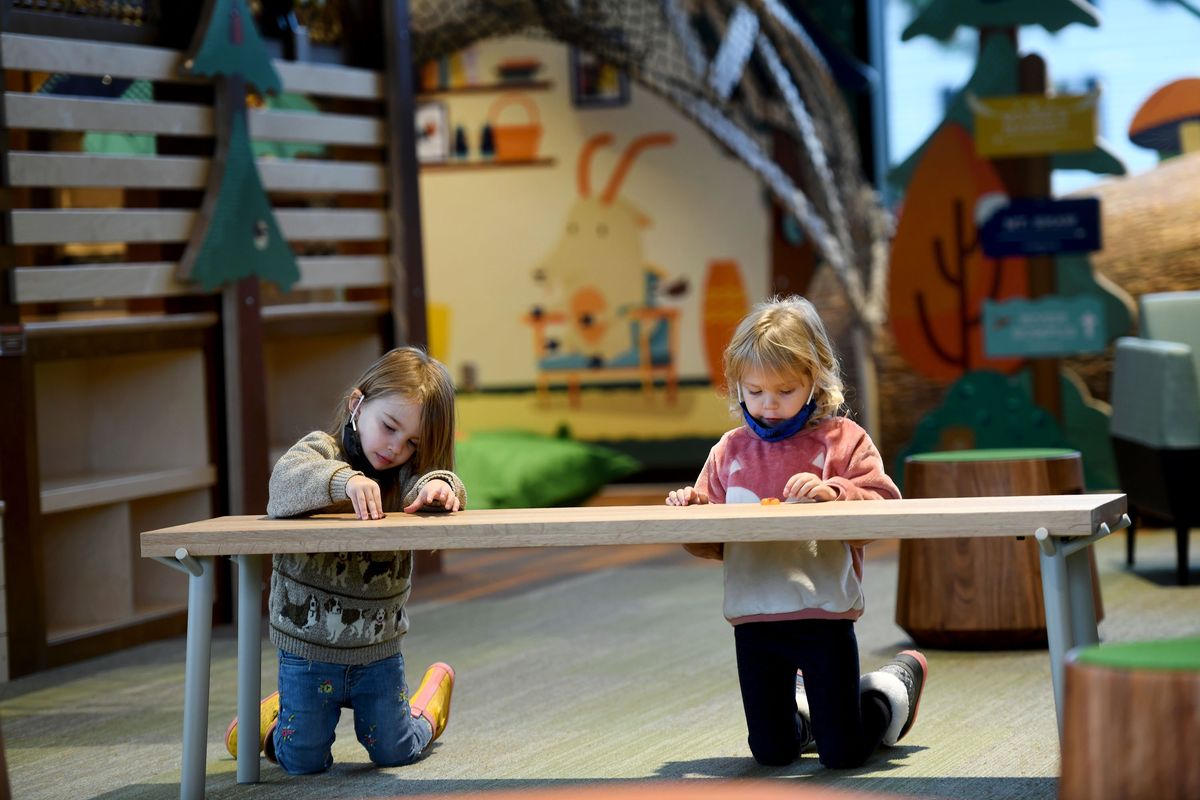 Penny Walter, 3, left and Beatrix Tucker, 4, play in the kids area during the opening of the new Liberty Park Library on Friday, Nov. 12, 2021. (Kathy Plonka/The Spokesman-Review)

For the Black community, Wilkerson said, the park is special. It was where churches gathered, celebrations were held, a Black baseball team played, and young people hung out.

“To see this library mark the next chapter in the amazing history and legacy – wow,” Wilkerson said.

Wilkerson said the neighborhood has often felt like the last kid picked for the basketball team.

“This time, we feel like we were first – like, ‘Come on, East Central, we want you on the team,’ ” Wilkerson said.

As with other library renovations included in the project, the Liberty Park Library places an emphasis on meeting space, providing three times the square footage compared to its predecessor.

It also features a children’s play space dubbed “Sasquatch Shack.” As Spokane Public Library builds play spaces into its renovated facilities, it’s working to give them all a theme that fits the Northwest.

Nods to the neighborhood include a mural on the library’s south wall that is a reproduction of the original topographic map the Olmsted brothers used to design Liberty Park.

Mayor Nadine Wooodward told those gathered on Friday that the Liberty Park library is her favorite of the four the city has unveiled during her tenure. She said it is a reflection of the city’s “renewed investment Spokane is bringing to the East Central neighborhood.”

“We are dedicated to revitalizing this historic neighborhood,” Woodward said.

As with all of its branches, the new library is designed to meet the demands of the 21st century library user. It features expanded “self-service” operating hours that have limited staff, but access to features like self-checkout.

Though an entirely new building, the Liberty Park Library is about five blocks from the former East Side branch inside the Martin Luther King Jr. Center at East Central building.

The East Side location closed on Nov. 5, but the Liberty Park Library is intended to serve the same community.

The former East Side location was hemmed in and offered no room for expansion, Chanse noted on Friday.

Acknowledging the literal division Interstate 90 caused when it was built through East Central in the 1950s, Chanse said the Library knew it had to provide services on both sides of the highway. That’s why it opened the Hive on East Sprague Avenue earlier this year.

In its new location, public officials are imagining a close relationship between the library and park that surrounds it. Spokane Parks and Recreation Director Garrett Jones noted the city plans to update the amenities in Liberty Park.