Gonzaga head coach Mark Few isn’t planning on missing future games as he comes off a three-game suspension, but he knew the team was in good hands with assistant Brian Michaelson serving in his place.

“Brian is really, really good,” said Few, in his first session with local media since pleading guilty to DUI in mid-October. “When I took a step back, I think it’s really important and moving forward to give each of these (assistants) a chance to do that a little bit, just for growth. … I think I owe that to them because they’re just like (former assistant) Tommy (Lloyd), Brian is invested in every aspect of this program. Recruiting, game planning, scouting, everything, development.”

Michaelson handled head coaching duties in two exhibition games and a 97-63 win over Dixie State in Tuesday’s season opener. He called it a great learning experience.

Few said he was still “communicating” at halftime despite not being present at the McCarthey Athletic Center.

“You know the stress and the pressure that goes on as a head coach, but now I’ve felt it and that’s different,” Michaelson said after the season opener. “Obviously, you respect the job coach Few does and what goes into having to be the head coach and have every call be yours, but until you actually feel it it’s different.

The Trailblazers cut Gonzaga’s lead to 10 in the second half before the Zags pulled away for a comfortable win.

“It’s good for them to get up and have to call a timeout,” Few said. “Heck, it was even good for B-Mike for (Dixie State) to make a little run at them in the second half. It wasn’t very comfortable, (but it) was good for him to feel that.”

Few maintained his daily duties – other than missing the three games – and likes what he’s seen from the top-ranked Zags, who entertain No. 5 Texas on Saturday.

Gonzaga’s rim protection appears much improved from a year ago with the addition of 7-foot Chet Holmgren and bouncy forward Kaden Perry. Few also likes the defensive potential of the guards and wings.

Still, the youthful Zags are far from a finished product.

“We’re very much a work in progress,” Few said. “Last year we probably could have played an NCAA Tournament game on Nov. 1. We played great coming out of the gates against Kansas. This year it’s going to be a journey of learning.

“We have six new guys that we’re counting on to play. I don’t think I’ve ever had that as long as I’ve been here. It’s making practices longer and some bumpy times during games, but I think it will put us on a growth plane.”

Practices haven’t run as smoothly as they did with last year’s experienced squad.

“Unfortunately, it looks like a lot of stops in practice, which I don’t like,” Few said. “I like flow and playing and it seems like we’re stopping and correcting a lot. I have to remind everybody, staff and myself to even let them just flow and play through some mistakes a little bit. There’s a lot of teaching going on.

“The fear when you’re doing that is kind of paralysis by analysis, and you don’t want that. It’s an awesome group, though. They’re eager to learn, they’re easy to coach. They’re getting better.” 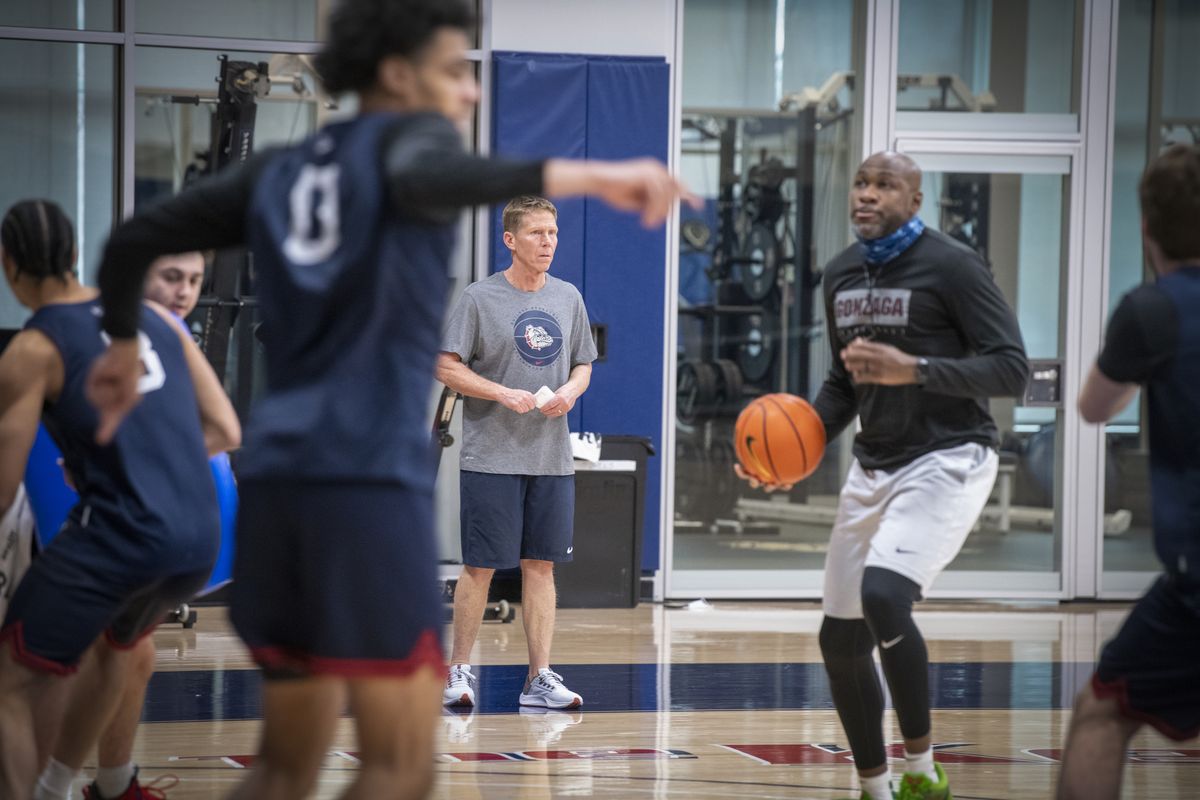 Gonzaga Bulldogs Coach Mark Few, center, was back on the practice floor coaching his team Thursday, Nov. 11, 2021 in the Volkar Center at Gonzaga. He was suspended and not allowed to coach through the first few games of the season. Now the team is preparing for a major showdown with Texas at the McCarthey Athletic Center Saturday. (Jesse Tinsley/THE SPOKESMAN-REVI)