A pile of single roses sat at the ready Thursday afternoon for visitors to place at the base of Spokane’s memorial to those killed in the Vietnam War.

Dave Strand brought his own flowers, though, to honor one of the names etched in stone, Army Sgt. Patrick Lee Henshaw.

“He was a tough guy,” said Strand, who wrestled with Henshaw at Shadle Park High School before joining the Navy as a Seabee. Henshaw went in sooner and was a member of the Army’s long-range reconnaissance patrols in central Vietnam when he was killed Dec. 19, 1967.

Henshaw’s name is one of more than 300 on the memorial, placed in Riverfront Park in November 1985 on a hill overlooking the Lilac Bowl. A two-year effort to renovate the memorial was capped Thursday with a rededication, visited by dignitaries and several of those responsible for securing the monument in the first place.

“Vietnam vets, let’s face it, simply were not properly welcomed home; they were not,” said Mike Fitzsimmons, the former radio broadcaster who chaired the original committee pushing for a monument to the war.

Fitzsimmons recalled several companies in town turning down the idea of a monument to Vietnam, dissuaded by the public opinion of the war and the United States’ actions in it. “That was our era as a society, and we’re making amends and have been ever since.”

The campaign to raise money for the statue eventually involved placing collection tins at local 7-11 and Pizza Hut restaurants, said Wes Anderson, a Marine Corps veteran who cared for the monument for many years.

Several visitors to the site on a chilly Thursday afternoon, many wearing the colors of their branch of military service and ballcaps emblazoned with their assigned division, said they’d spent years avoiding memories of the war. 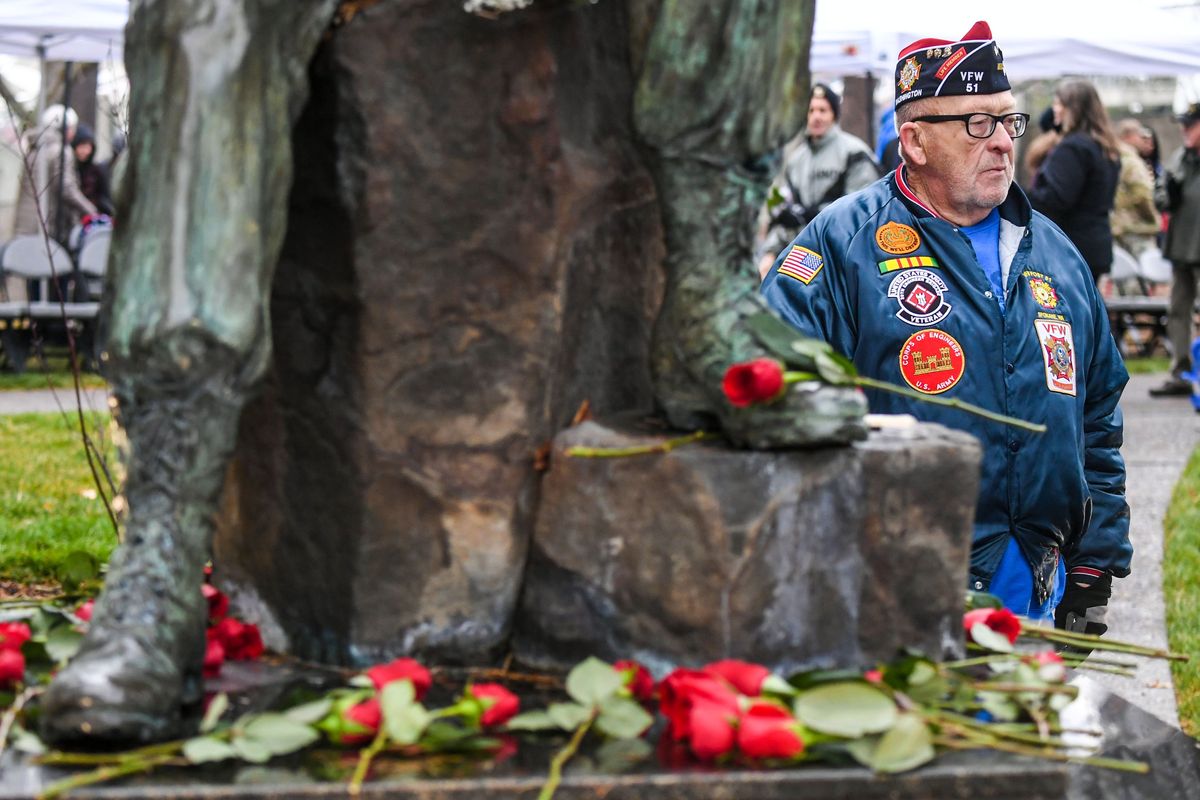 “My wife knew nothing about it,” said Stan Inzer, a member of the 101st Airborne Division in the United States Army. He told an assembled crowd of a couple hundred people that he didn’t really start healing from his war wounds until after a visit to the national Vietnam War memorial in 2002 and seeing the name of Private First Class William G. Gaddy, of Georgia, killed Sept. 29, 1968.

“That afternoon we walked into another ambush,” Inzer said, his words sometimes choked by tears. “Willie Gaddy was instantly hit.”

Inzer told the crowd Gaddy’s final words were a request for his mother. The memory at the wall almost caused Inzer to collapse, he said. From then on, he began talking about his experiences with other veterans.

Strand, too, said it took him a long time to start talking about the war. He focused on his job as a high school teacher.

“When you come back, you just shut down,” Strand said. “Because the whole world is against you. Nobody understands anything, and you can’t explain it to them anyhow.”

Strand credited the local Vet Center with helping him come to terms with his service and experiences overseas.

Cody Hurst, an Army veteran, paused after the ceremony to trace his fingers along two names etched into the stone: Roy Johnson and Larry Jamerson. They were classmates of his, in the same homeroom, at Rogers High School, Hurst said.

“It brings back memories of us being in school,” said Hurst, who was visiting the Spokane memorial for the first time in what he estimated to be 30 years.

“I really like the way they’ve redone it,” Hurst said. “It’s beautiful.”

The statue of a soldier, holding a letter but no weapon, was carved by Deborah Copenhaver-Fellows. Garco Construction has been the lead firm on the rebuild, which was funded in part by donations raised by former Spokane Mayor David Condon, as well as donations of time, materials and money by Garco, Global Credit Union, the Innovia Foundation, the Spokane Indians baseball club and the Spokane County Regional Veteran’s Services office.

The new design includes a plaza that is wheelchair accessible, new benches, a decorative hand railing and lighting. The decision was made to keep the monument at its current location, despite some calls to move it closer to the Spokane Veterans Memorial Arena, where monuments stand to other wars and their dead.

Inzer didn’t know about the local memorial until a few years ago. He told the crowd a story about visiting the first time, seeing a man on a bench and sitting down to talk. The two began relaying experiences, Inzer in the army and the other man from the Marine Corps.

“He stood up, started walking up the trail,” Inzer remembered. “He came back, threw his arms around me and gave me a hug. He said ‘Thank you. For the first time, someone listened to me.’ ”