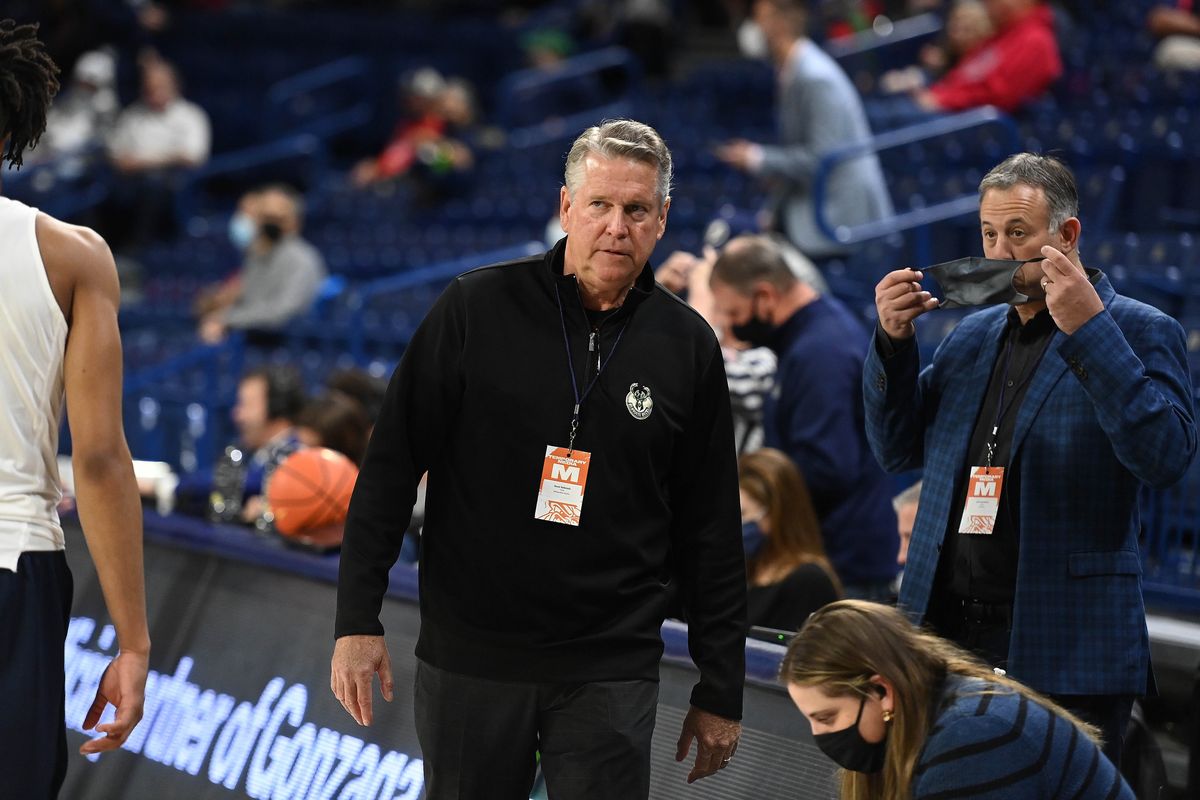 A scout for the Milwaukee Bucks hangs near the scorers table before the game with Texas , Saturday, Nov. 13, 2021, in the McCarthey Athletic Center. (COLIN MULVANY/THE SPOKESMAN-REVIEW)

Drew Timme scored a career-high 37 points and top-ranked Gonzaga beat No. 5 Texas 86-74 on Saturday in the McCarthy Athletic Center.

The fifth-ranked Longhorns are the highest-ranked opponents to ever step into the Kennel.

Timme’s 37 points are the third-most in the Kennel behind Ronny Turiaf’s 40 and Adam Morrison’s 42.

Rasir Bolton added 16 points with four made 3-pointers and Anton Watson had 10 to round out the double-digit scorers.

Andrew Nembhard had eight assists as the lead facilitator for the Zags.

The Bulldogs jumped out to a 16-9 lead behind a perfect 5-for-5 shooting for Timme. Two minutes later and GU extended its lead to 10.

The rest of the first half was the Timme show as he had 22 points at intermission.

Midway through the second half is when Texas found its footing, drawing within 12 with a 14-4 run.

GU was shooting 33% from the floor as the Longhorns attempted to cut into the Bulldog lead.

But some big-time 3’s from Bolton and freshman Nolan Hickman reenergized the Zags offense and with 8 minutes left in the game, GU led  67-53.

GU is back in action on Monday, hosting Alcorn State at 6 p.m. on KHQ.

The game wasn’t two minutes old and Gonzaga’s Drew Timme had scored on two layups, a free throw and a dunk. | Read more

Rasir Bolton came to Gonzaga with an objective many of the program’s most successful transfer guards can relate to: win on the big stage, even if it means sacrificing individual accolades for the opportunity to play deep into the month of March. | Read more

Difference makers: Drew Timme paces No. 1 Gonzaga with 37-point outing against No. 5 Texas

Drew Timme isn’t a surprise to anyone anymore. Not after the two seasons he has put together for the Gonzaga Bulldogs. | Read more

Mike Roth’s legacy at Gonzaga is unmistakable and going forward, the road that runs just south of McCarthey Athletic Center will carry the namesake of the school’s longtime athletic director.  | Read more

Continuing a common theme from a season ago, Nembhard and Timme working the pick and roll to perfection pic.twitter.com/LwZKjJ0aGP

11:53 - GU 21, Texas 11: The Bulldogs have their largest lead of the game at the under-12 timeout. As a team, they are shooting a shade under 70% from the floor. Nembhard has three assists early in this one.

8:40 - GU 29, Texas 15: A menacing defense has forced three turnovers to help extend the Bulldog lead. GU meanwhile has no zero turnovers. Timme still perfect from the field with 13 points.

Really nice team defense from the #Zags here. You can see the frustrating length and speed from the perimeter defenders as they rotate to the ball handler. pic.twitter.com/4IWOVGiPe2

3:58 - GU 34, Texas 21: The Zags are keeping the Longhorns at arm length, holding a double-digit lead toward the end of the first half. Both teams are struggling from behind the arc as GU is 2-for-8 and Texas is 1-for-10.

A buzzer-beating shot from Bolton gives the Bulldogs a 47-27 lead at the break.

It appears Rasir Bolton has been watching @jalensuggs highlights?

Knocks down the halftime buzzer beater. #Zags up 20 over No. 5 Texas at the half. pic.twitter.com/XUiVf1hEMf

But the story of the first half was the monster performance from Timme who has 22 points. He missed was 9-for-10 from the floor.

Think Drew Timme had a fun first half?

He finished with 22 points on 9-for-10 shooting in the half. pic.twitter.com/W6SuC4zCrP

The Zags shot almost 60% from the floor and caused the Longhorns to turn the ball over seven times.

Drew Timme has been dominating the post with 22 points on 9 of 10 shooting.

15:49 - GU 56, Texas 39: At the first media timeout, the Zags continue to feed Timme who has four points. He also dished out an assist to Holmgren who made his first bucket of the game.

Timme had the easy shot here, but let the defenders collapse and dumped it under to Holmgren for the easy 2. pic.twitter.com/EcwhW8q1VV

10:45 - GU 60, Texas 48: Coach Mark Few calls a timeout here as the Longhorns are pushing back with a 14-4 run. Timmy Allen leads Texas with 14 points. The Zags are shooting 33% from the floor in the second half. Not much movement happening on the offensive end and too much reliance on Timme down low.

7:38 - GU 67, Texas 53: Bolton with six points on 2-of-2 shooting from behind the arc in the second half. Needed points as Texas was making a run. Bulldogs keeping a double-digit lead midway through the half.

Nembhard does well here to keep his eyes up on the penetration. Finds Bolton hiding in the corner for his second 3 of the half pic.twitter.com/3OwH304k5E

His previous high (30) was in last seasons NCAA Tournament game against Oklahoma. pic.twitter.com/E0xtLk3YwK

2:36 - GU 84, Texas 66: And just like that, the Bulldogs have an 18-point lead over the Longhorns. Two 3’s from Bolton and one from Hickman extend the Zags’ lead. Timme (37 points) is 5 points away from breaking the scoring record in the Kennel (42 by Adam Morrison).

No. 1 Gonzaga hosts No. 5 Texas at the Kennel on ESPN2 at 7:30 p.m for the first meeting of top five teams in Spokane.

The Zags won their first game 97-63 over Dixie State, while the Longhorns beat Houston Baptist 92-48.

GU was lead by a dominating post performance by Chet Holmgren, who totaled 14 points, 13 rebounds, six assists and tied the school record for blocks with seven. Texas had six players score double figures in its win, led by Courtney Ramey’s 14 points on 4 of 5 shooting from three.

According to ESPN’s bracketology, GU is projected to be a No. 1 seed, while Texas secures a No. 2. The Longhorns were a No. 3 seed at last year’s NCAA Tournament, where they were bounced in the first round in a 53-52 loss to Abilene Christian.

Gonzaga is 3-0 all-time against Texas, last winning a 76-71 OT game in Portland on Nov. 26, 2017 in the PK80 Invitational tournament. Rui Hachimura came off the bench to lead the Zags with 20 points and nine rebounds. 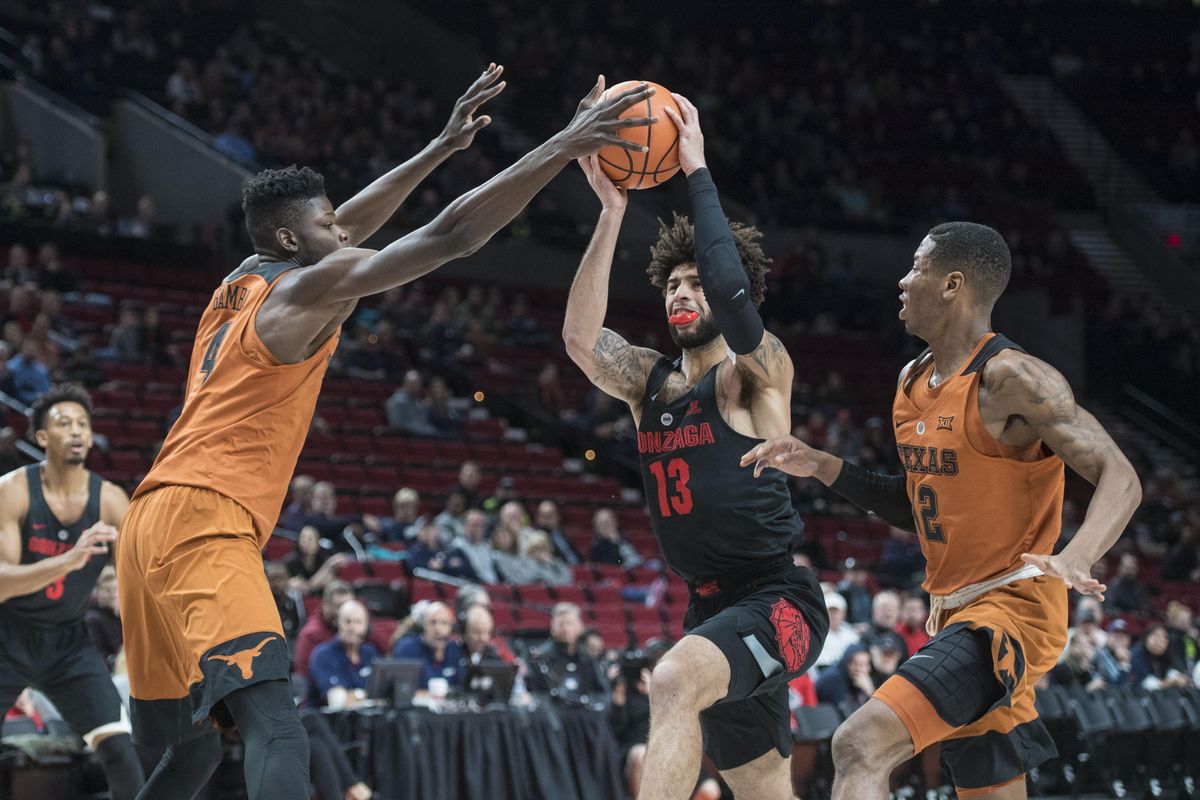 Before that GU won 87-77 on Dec. 2, 2006 in the Basketball Hall of Fame Challenge in Phoenix, led by Derek Raivio’s 27 points on seven 3-pointers. All-time great Kevin Durant scored 29 points in the game.

The Zags’ also won the first meeting with the Longhorns 67-64 on Nov. 23, 2001 in Anchorage, Alaska, off of Dan Dickau’s go-ahead layup and free throws with less than a minute remaining.

‘It’s going to be a fun brawl’: All eyes on Spokane as No. 1 Gonzaga, No. 5 Texas meet in highly-anticipated showdown

One of them boasts the odds-on favorite to win national player of the year, along with the country’s top recruit. The other counters with a group of high-level transfers – six of the nation’s top 31, according to an offseason list compiled by ESPN.com. | Read more

Marcus Carr grew up in hockey country and spent the majority of his childhood with a basketball in his hands. But it’s possible a third sport helped give Texas’ senior point guard his edge. | Read more

More than a decade after Gonzaga took on Texas and Kevin Durant, the Longhorns prepare for a test against college basketball’s latest ‘unicorn’

The term wasn’t thrown around so loosely 15 years ago, but there was a unicorn on the floor one of the last times Gonzaga’s basketball team played a high-stakes, early-season nonconference game against the University of Texas. | Read more

No .1 Gonzaga vs. No. 5 Texas: Numbers add up to a big-time matchup

By any measure, No. 1 Gonzaga-No. 5 Texas qualifies as a huge matchup, but Saturday’s showdown goes straight to the top of the list as far as combined AP rankings in a Zag home game. The next closest isn’t all that close. No. 10 Gonzaga lost to No. 13 Illinois 85-74 a decade ago. | Read more

Ontario’s Very Own: Longtime friends and teammates Andrew Nembhard and Marcus Carr will be rival point guards when No. 1 Gonzaga hosts No. 5 Texas

The starting point guards in Saturday’s nationally-televised showdown between No. 1 Gonzaga and No. 5 Texas (7:30 p.m., ESPN) go back so far nobody can quite remember how old Andrew Nembhard and Marcus Carr actually were when they joined forces to play for the rec-league Vaughan Panthers at the Dufferin Clark Community Centre in Thornhill, Ontario. | Read more

Gonzaga head coach Mark Few isn’t planning on missing future games as he comes off a three-game suspension, but he knew the team was in good hands with assistant Brian Michaelson serving as acting head coach. | Read more

Kelly Olynyk and Domantas Sabonis were collegiate All-Americans and double-double machines at Gonzaga who combined to win 147 games during their respective tenures with the Bulldogs before moving on to the NBA. | Read more