Oregon’s rushing attack was too strong for Washington State to stop in Eugene Saturday.

If not for the Cougars forcing two fumbles – one where Brown was stripped at the WSU goal line – the score could have been more lopsidded.

UO averaged 6.5 yards a carry, while WSU managed just 3.6 on the ground.

Jayden de Laura completed 20 of 36 passes for 280 yards and two touchdowns, but had two interceptions and a fumble that went into the endzone for a touchback on the opening drive.

13:41 - WSU 0, UO 0: Jayden de Laura fumbles out of the endzone for an Oregon touchback. Tough break for the Cougars after big play to start the game.

9:36 - WSU 0, UO 0: Potential first overall pick Kayvon Thibodeaux drops Jayden de Laura for a 7-yard sack and the Cougars are forced to punt. Oregon takes over at its 25.

3:44 - UO 7, WSU 0: Jayden de Laura makes a costly throw into double coverage that is intercepted by Verone McKinley III at the Ducks’ 47.

2:04 - UO 14, WSU 0: Anthony Brown completes an 11-yard touchdown to Travis Dye over the middle for a touchdown. The Duck running back is the teams’ reception leader on the season.

9:22 - UO 14, WSU 0: De’Zhaun Stribling stopped short of the line to gain on third down and the Cougars are forced to punt. Oregon starts on its own 30.

WSU has just 44 yards of offense outside of the 70-yard pass to Calvin Jackson Jr. on the second play of the game. Cougs also 1 of 4 on third down attempts.

9:08 - UO 14, WSU 0: The Cougs are back to their fumble forcing ways. Jahad Woods knocks it loose from Travis Dye, recovered by Jaylen Watson at the Oregon 46.

The Coug D comes up with a takeaway!

6:52 - UO 14, WSU 7: De’Zhaun Stribling streaks across the middle and Jayden de Laura finds him for a 14-yard touchdown untouched.

4th TD catch of the year for De’Zhaun Stribling

4:49 - UO 14, WSU 7: Brennan Jackson sacks Anthony Brown for a loss of five and Travis Dye is stopped on a flair pass on the following play. Cougars start on their own 27 after the Oregon punt.

0:11 - WSU 14, UO 14: Jayden de Laura throws a beautiful pass to Travell Harris down to the UO 1, then two plays later keeps an option play for a 1-yard touchdown.

Jayden de Laura ties it up late in the half!

Washington State scored 14 unanswered points to tie the game before halftime. Jayden de Laura made a costly interception late in the first quarter that Oregon capitalized to take a 14-0 lead, but the Cougars quickly scored off a Duck fumble in the second to get back in the game.

De Laura is 12 of 19 for 199 yards and a touchdown, and added a rushing touchdown before the break. The Cougars have outgained the Ducks 233-157 and both teams are even in third down conversions – 4 of 7.

12:52 - UO 21, WSU 14: Anthony Brown scrambles up the middle, hits the sideline and dives the final four yards for a touchdown. Brown is the Ducks leading rusher with 61 yards on 10 carries.

10:28 - UO 24, WSU 14: Game-changing play by George Hicks III, who strips the ball from Anthony Brown at the goal line and returns it to midfield.

ANOTHER 1!@Ghicks18_ rips it out and the Cougs are in business!

Washington State travels to Eugene to take on No. 5 Oregon with the winner taking control of the top spot in the Pac-12 North at 7:40 on ESPN.

Oregon enters the game a 14 point favorite, as the Ducks control their own destiny toward their first playoff appearance since 2014 – beating Florida State 59-20 for the only Pac-12 win in the CFP.

Here ducky, ducky. I know how much you like the crust. #GoCougs #BeatOregon #letsgetthisbread pic.twitter.com/wjrP11Rmp1

The Ducks have won the last two meetings, though before that the Cougs had won four straight including a 34-20 victory in 2018 that saw College Gameday come to the Palouse. 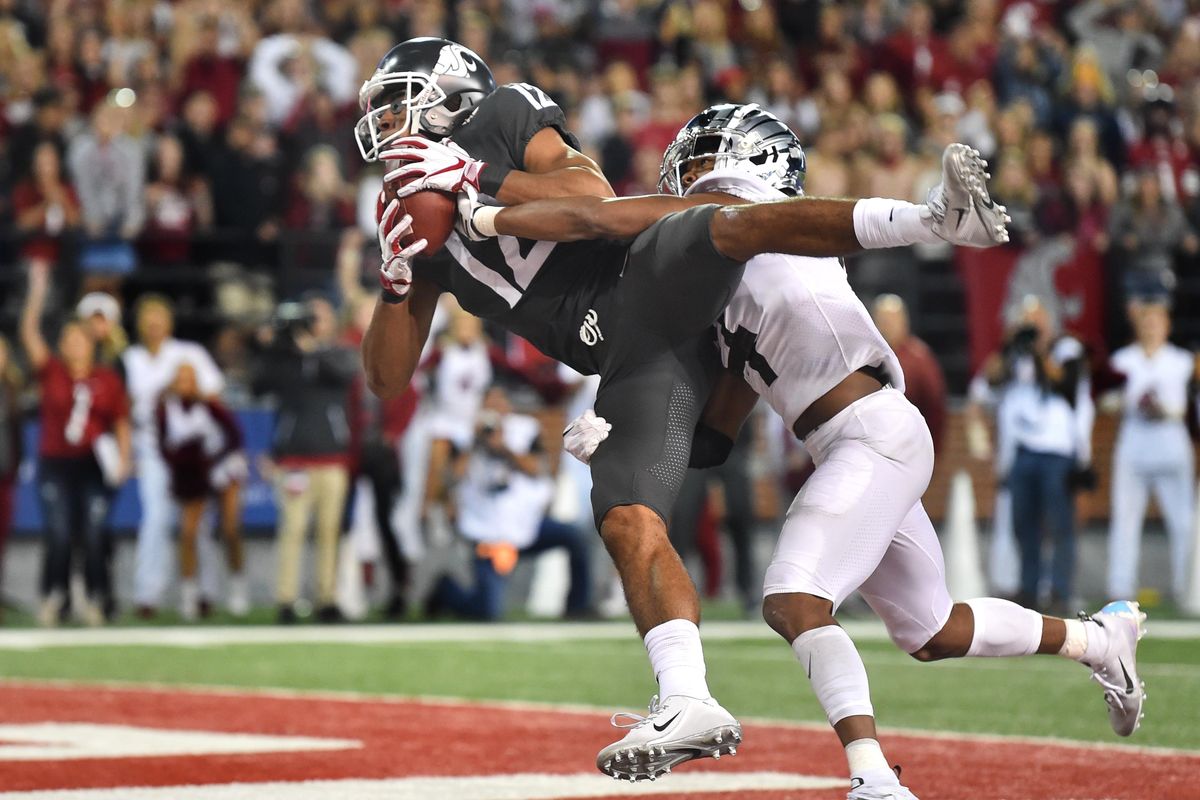 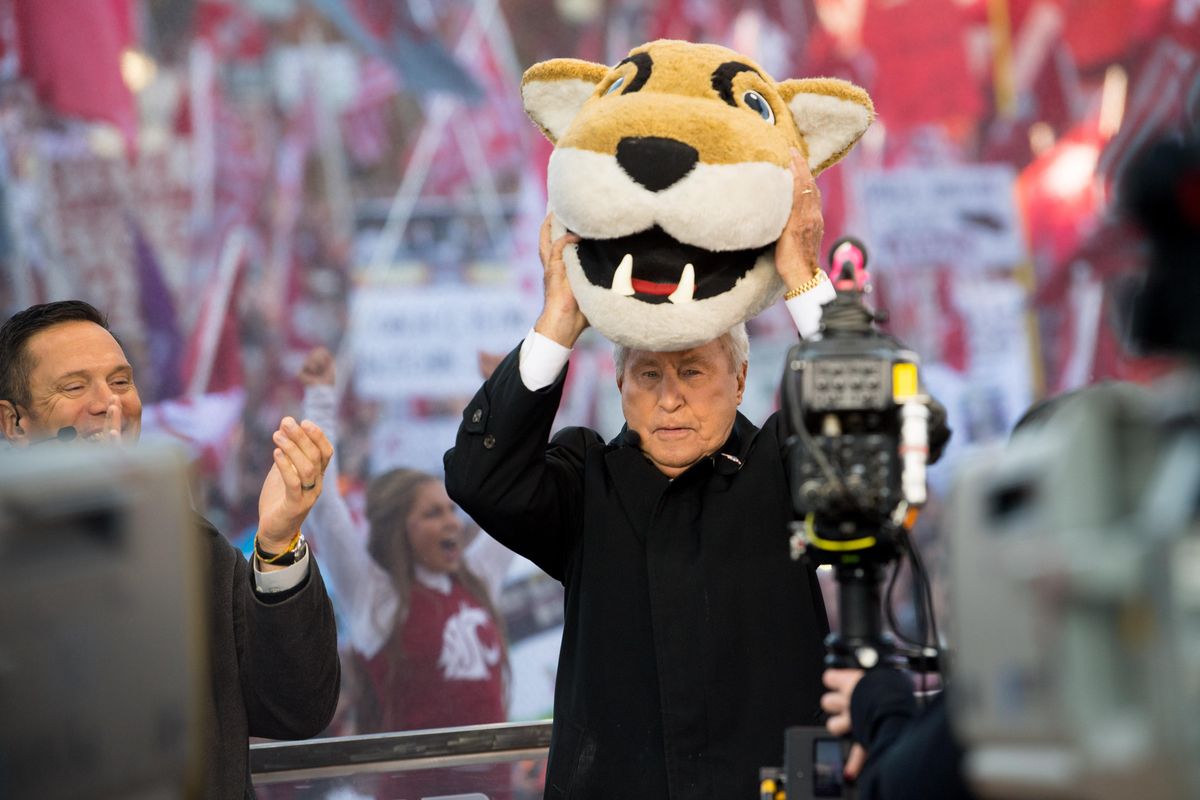 Lee Corso holds the Cougar mascot head high, indicating his prediction of a WSU win in the closing minutes of Saturday’s ESPN GameDay show, much to the delight of former WSU quarterback Drew Bledsoe, left, and the raucous WSU crowd. (Tyler Tjomsland / The Spokesman-Review)

‘Our guys have played themselves into this situation’: Washington State stayed the course to set up meaningful game with No. 5 Oregon

EUGENE – Throughout the two weeks ahead of Washington State’s biggest game of the year, Cougars players have been instructed to proceed as normal. | Read more

Two-minute drill: Keys to victory for Washington State against No. 5 Oregon

The pick: Why Oregon will beat Washington State

Back on Oct. 9, perhaps inspired by Washington State’s gutty 31-24 win over Oregon State that had just concluded, I made a prediction in the Gesa Field press box. | Read more

With big matchup against No. 3 Oregon on tap, looking back at Washington State’s most significant regular-season games in recent memory

EUGENE, Oregon – If they can manage to spoil Oregon’s party, it’ll no doubt go down as one of the Washington State Cougars’ most significant wins in program history. | Read more

Pac-12 picks: Washington State visits Oregon with the North division at stake (are the Cougars up to the task?)

The Hotline likes Colorado, OSU and Washington against the spread. | Read more

Line of scrimmage a ‘big point of emphasis’ for Washington State against No. 3 Oregon