A GRIP ON SPORTS • Is this is the end? The end of elaborate plans. Of everything that stands. No safety, no surprise. The end. The Seahawks’ run of Pete Carroll-led success is over. Close the door. Move on.

• That the final nail was driven into the coffin in Green Bay is appropriate. The not-so-frozen tundra has been a graveyard for Seattle’s hopes many times in the past. Sunday, it served that purpose once again.

Hope actually died a while back. But no one wanted to make the final pronouncement. There is no choice now. The Hawks’ season was buried in the 17-0 ugly-fest that posed as NFL game. It would take a miracle, actually a series of miracles, for 3-6 Seattle to play a part of any significance in the playoffs this year. And, it seems, some sort of magic to justify not blowing everything up and starting over.

A new wind has to blow through Seattle. It’s cold to say so, but Carroll’s time has passed. He’s the best coach the franchise has ever had. He’s delivered the Promised Land. And came oh-so close to paradise a second time. His teams have been consistently successful, always in contention and, with Russell Wilson at quarterback, a joy to behold.

But that time has passed.

Wilson has lost a lot of what made him Russell Wilson. His mobility isn’t at a level anymore that can overcome the Hawks’ seemingly constant inability to pass protect. And Carroll’s defenses, while still able to turn in solid efforts – any team with Bobby Wagner in the middle has a rock from which to build – after a midseason retooling, can’t carry the Seahawks to victory any longer.

It’s time to start anew. The 70-year-old Carroll, while still enthusiastic every minute of every day, can’t be enamored with the idea. And shouldn’t be. It’s going to be a project that takes a while. And will take a new look on everything.

Wilson probably won’t want to be a part of it either. He has earned the right to make that decision. Though not what he was, in the right situation he still can be one of the best quarterbacks in the NFL. Right now, Seattle isn’t the right situation. 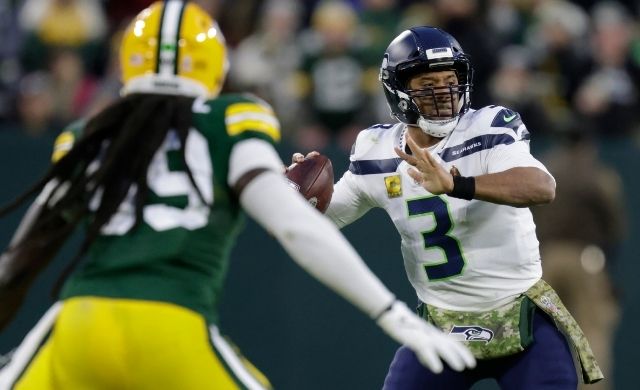 He might be able to bring the Hawks the one thing they don’t have. High draft choices. Grabbing Jamal Adams for a Super Bowl push in 2020 cost them next year’s first-round pick and last year’s first- and third-round choices. If they have to rebuild, someone of stature, someone with utility for another team, someone like Wilson or Wagner, will have to be dealt. Maybe even Adams, who has played his best football of the season lately.

Patching the boat isn’t going to do any more than keep it afloat. It’s not making a Super Bowl voyage. Or even one to the playoffs. It’s time for a rebuild. A new keel. A new engine. And a new captain.

• If Seattle’s pro football team changes course after the season, it will join the town’s university version. The Huskies didn’t wait until the end of the season, however. Athletic director Jen Cohen pulled the ripcord yesterday, firing Jimmy Lake after just 13 games in charge – and with two games left on the schedule.

Now UW is in the same place as Washington State. Looking for a head coach.

And next week’s Apple Cup? For one year we can call it the Application Cup. WSU’s interim coach, Jake Dickert, probably has his filled out already, though unless the Cougars win out he probably won’t be the choice. Washington’s interim, Bob Gregory, won’t be a candidate, not with the Huskies’ recent track record. Next year fresh faces will lead both schools.

Optimism will abound. Hope will spring. It will be a beginning. And the end of an odd year in the state. 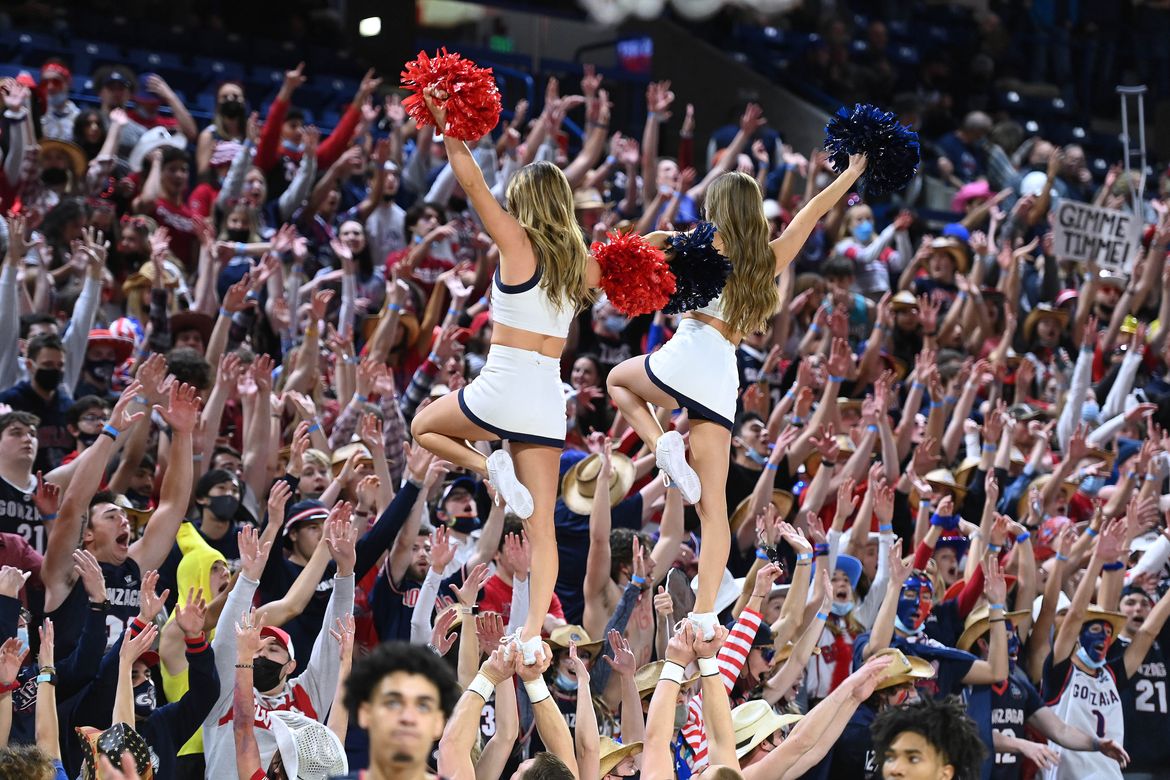 Gonzaga: One thing about the college basketball season. Once it gets rolling, the early season games just seem to pile on each other. Here it is, two days after the Zags’ big home win over Texas and, boom, another game. Alcorn State, on a four-game swing through the Northwest (it is 0-3), is in McCarthey tonight. Theo Lawson has the key matchup. He also has a preview, which looks at tonight’s game and the next few on the schedule. … We can’t, however, turn our back on the UT game that quickly. Jim Meehan examines such on-campus battles between top teams and contrasts them to neutral-site games. … Jim also has some recruiting news on a point guard the Zags targeted. Jackson Shelstad picked Oregon. … The Texas win resonated throughout the national landscape. … The women were in action Sunday, playing their first road game. Though it was a grind, Gonzaga got past Montana 67-60 in Missoula. Jim Allen has the game story. … Sophia McFarland has this feature on what Gonzaga’s success means to its younger fans, all of whom have experienced nothing but high achievement from the team. 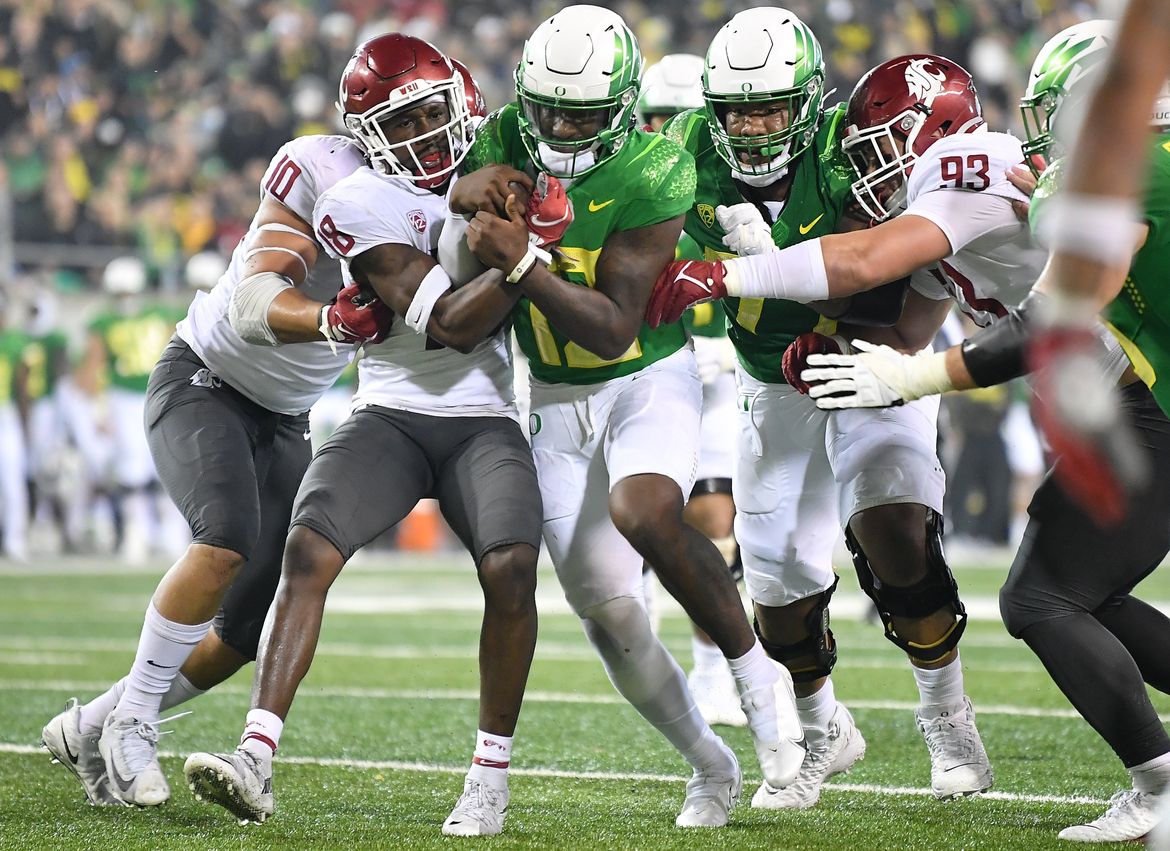 WSU: Though the Cougars weren’t able to upset Oregon on Saturday, they did show resilience. (As my dad used to say, that and a nickel will get you a cup of coffee. My dad had a long memory.) Colton Clark takes time to look back at the 38-24 loss. … The poor quality of the ESPN broadcast Saturday night is unacceptable. … John Blanchette opines about Washington’s decision to fire Lake. There is little comparison to what the Huskies did and what happened in Pullman. … Elsewhere in the Pac-12 and college football, Jon Wilner looks back at the weekend in the Mercury News. … Oregon and Utah will meet Saturday on ABC. The Ducks are probably going to have to defeat Utah twice to make the college football playoffs. The Utes have their eyes on the Rose Bowl. … All Colorado can see anymore is the spoiler’s role. … Oregon State earned a bowl berth with the win over Stanford. … After defeating the Buffs, UCLA is also headed to a bowl. Which bowl is still to be determined. The Bruins are actually headed to the Coliseum this week for their showdown with USC. … Arizona State is coming off a great comeback win at Washington. … Arizona didn’t win but did play better. … In basketball news, Colorado has a lot to fix against Maine. … Arizona welcomes in a North Dakota State team that is making a western swing. … Both Gach is back at Utah and he seems comfortable with the return. … UCLA has a sparkplug on the bench. … Arizona State hosts North Florida. … The Stanford women had their ring-ceremony day ruined by a home loss to Texas.

EWU: An Eastern receiver had a great day in the NFL yesterday. Except this week Jason Shoot focuses on Kendrick Bourne, not Cooper Kupp in his look at local players in the NFL. … Around the Big Sky, offensive consistency is still elusive for Montana. … In basketball, Montana State pulled away from Rocky Mountain after halftime. … Montana is at North Dakota tonight.

Seahawks: Wilson wasn’t Wilson yesterday. Coming off his finger injury, it probably was to be expected. But the Hawks’ offense needed him to be better. … There were some odd officiating decisions made that certainly didn’t help the visiting team. That such things occurred in a Green Bay/Seattle game isn’t unprecedented. … The Hawks also didn’t help themselves with some of their antics. D.K. Metcalf, who basically just quit late, and Carlos Dunlap come readily to mind. … There are always grades.

Kraken: The schedule has been tough. And it’s not going to get any easier soon.

• High school’s winter sports begin today in Washington. Which means boys and girls throughout the area will be in gyms trying to make their school’s team. And we’ll be there as well. … By the way, I know you have to be of a certain age to understand The Doors reference at the start if today’s column. I am. Until later …