A GRIP ON SPORTS • Here it is, just past the ides of November and we’re thinking about baseball. Other things, too, but baseball is at the top of the list. And how the Mariners suffered another unfortunate defeat.

• What did you expect from Seattle before last season started? If it was nothing much, you weren’t alone. The roster had holes. And they only got larger as the season began, what with starting pitcher James Paxton suffering another season ending injury and young first baseman Evan White and centerfielder Kyle Lewis falling to the wayside as well. Coupled with a bullpen that seemed in flux, a lineup that was going to have be successful while introducing a few young players to the day-to-day grind of big league baseball, it would take a miracle for this team to contend.

And yet it did. Not just for a while but until the final week of the season.

Why? Though the players deserve most of the credit, the guy in charge of the dugout has to be recognized.

Scott Servais did the best job of managing in baseball. Period. End of sentence. Not just the American League. Major League Baseball. If you compare the M’s roster to that of, say, Tampa Bay, any intelligent person would laugh at the divide. Boston, New York, Toronto, Oakland, Chicago. Each seemed better equipped for success.

Use analytics. Use the eye test. Use a darn Ouija board if you want. Doesn’t matter. The M’s shouldn’t have been where they were.

And Servais should have been rewarded for that. He wasn’t. Yesterday, Kevin Cash topped the voting for the A.L. Manager of the Year for the second consecutive season. It is not a travesty – Cash has dialed in his clubhouse and has the Rays ready to compete in baseball’s best division every season – but it is a mistake.

We certain the M’s location didn’t help Servais. Playing in the upper left corner of the nation, starting home games at a time when much of the I-95 corridor is falling asleep, doesn’t help national exposure. But that’s an excuse, not a reason. The reason is simple. Winning the A.L. East is the be-all and end-all for many voters. If you top the Yankees and the Red Sox, well, you have to be the best.

Except it was the Astros who turned out to be the American League representative in the World Series. And you know who bit their heels all season? Yep, the same Mariners no one expected to be within growling distance.

Servais deserves a lot of the credit. And the award. He’ll have to settle for the former. 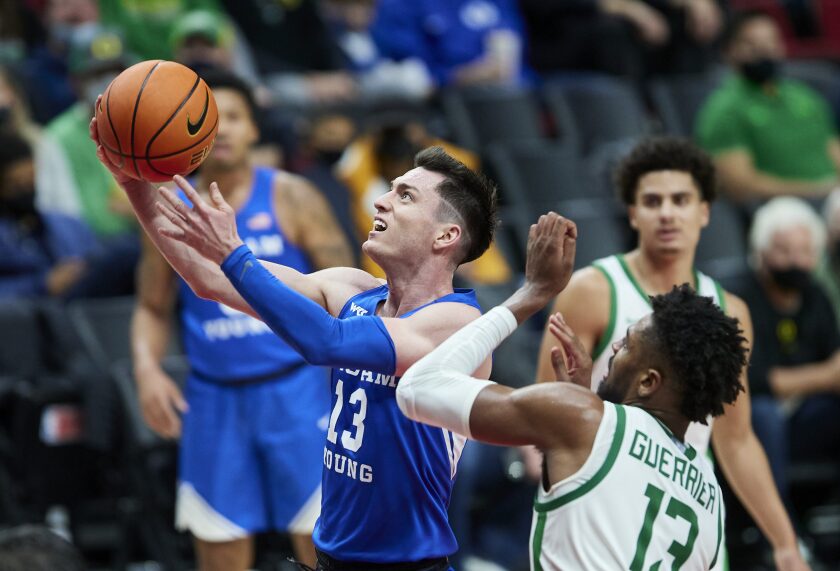 • There are some college basketball results that surprise just because of who won and who lost. And then there are others, such as BYU’s 81-49 destruction of Oregon in Portland on Tuesday night, in which the margin is what makes one shake their head.

“How in the heck did that happen?” seems to be the question of the day in the Willamette Valley. After all, the Ducks came into the Phil Knight Invitational game ranked 12th nationally. Dana Altman had put together his usual assortment of five- and four-star recruits. And they had yet to be tested. Or built into a cohesive unit.

Which is the answer to the question. BYU may not have the physical attributes of many of its opponents, but Mark Pope’s squad is experienced in many ways.

The unranked Cougars are older, with their roster littered with upperclassmen or players of upperclassmen age. They have played together. Four starters, including standouts Alex Barcello and Caleb Lohner, and four other players are back from last season. And they have been tested, facing a West Coast Conference schedule that includes Gonzaga every season.

BYU look connected. Together. Organized. Oregon? Well, disjointed might be the best description. And when things started to steamroll, the Ducks didn’t seem to trust each other. It is a roadmap to a blowout. That will change. Give Altman time and he’ll have UO looking more like the Cougars in that regard. But on this mid-November night, Brigham Young was miles better.

Gonzaga: Before we get too far away from it, Jim Meehan took some time to look back at the Alcorn State win. … Former Zag player (and current TV analyst) Dan Dickau has opened a basketball-training venue on the North Side. Theo Lawson has this story and Tyler Tjomsland has a photo gallery. … Around the WCC, the BYU win could pay huge NET dividends down the road for everyone in the conference. WSU: It’s Senior Night on Friday in Pullman. The Cougars will be honoring 14 players who have made it clear to the coaching staff they won’t return next season. Colton Clark looks at the group today and all it has accomplished. It’s a lot. … A couple of WSU games in Spokane next month will also serve as a fundraiser for a local charity. That news is part of a local briefs column. … Jon Wilner can see Washington State playing in the Las Vegas Bowl if it wins out. … He also has the Cougars fourth in his latest conference power ranking. … Arizona’s best pass rusher is a defensive tackle. … Elsewhere in the Pac-12 and college football, the upheaval among the conference’s coaching fraternity is hurting recruiting. … Is ESPN cutting corners just as the Pac-12 would like to mine the company for more media revenue? … Oregon remained third in the CFP standings after its win over Washington State but have to win this week at No. 23 Utah to keep that intact. The Utes know the challenge will demand they play their best game. … Colorado is ready to host Washington. … Arizona State has to figure out how to stop Oregon State’s potent rushing attack. It’s the only way for the Sun Devils to keep their slim Rose Bowl hopes alive. The Beavers are happy to be bowling. … The Big Game will feature one team coming off COVID-19 issues (California) and another with its starting quarterback coming off an injury (Stanford). There are even more connections between the schools. … With Jaxson Dart making his first start in USC’s most important game, he’s got a chance to make a statement. … UCLA just wants to keep winning and make a better bowl statement. … In basketball news, Arizona won by 50 points for the second consecutive game. The Wildcats’ 97-45 win over North Dakota State had folks scrambling for the record books. … A day off? What a pity for Colorado. … Andy Enfield and USC were successful in their return to Florida Gulf Coast. 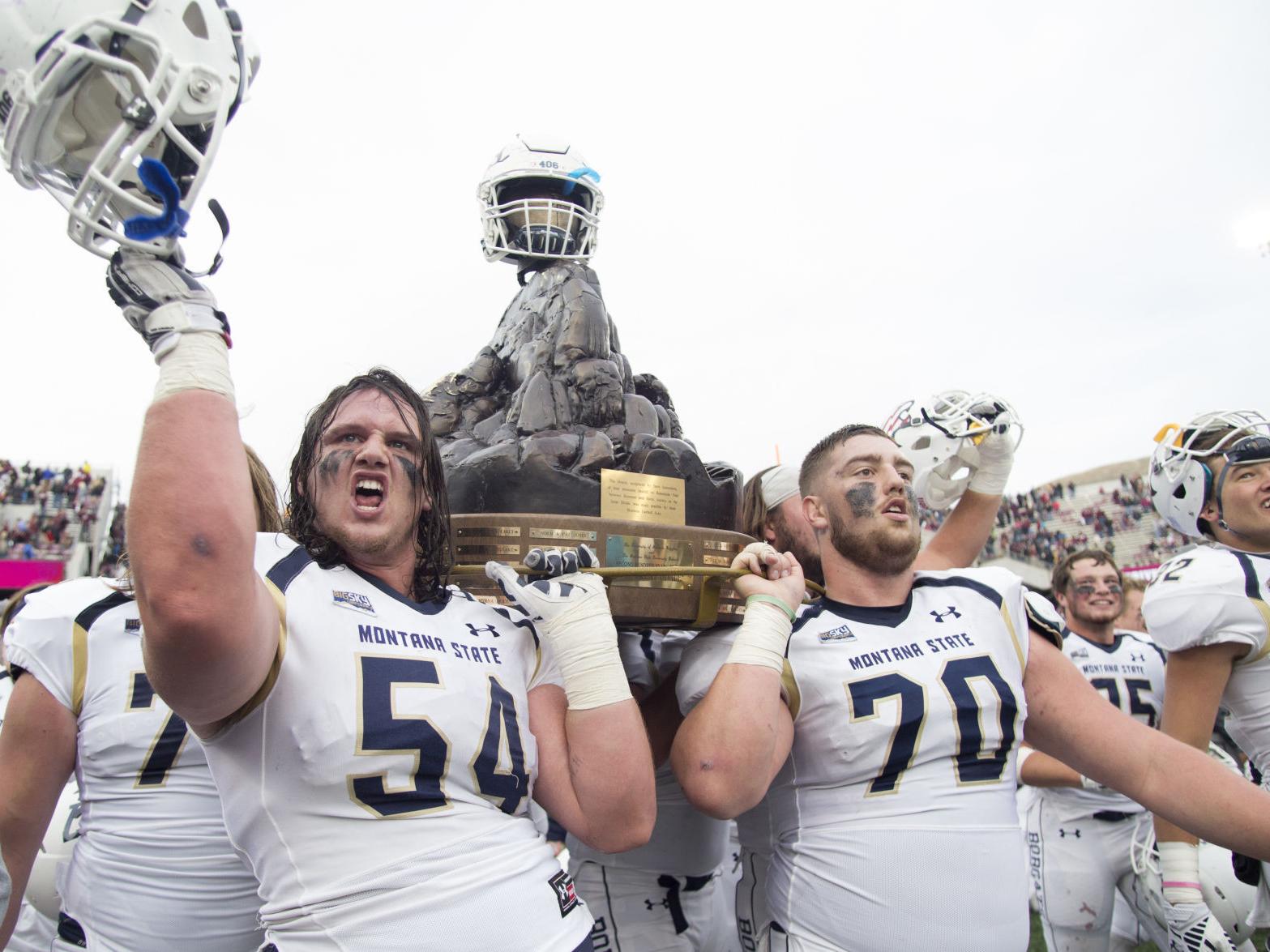 EWU: The Eastern women fell on the road to Grand Canyon. … Around the Big Sky, Sacramento State is poised to win the conference title. If it can defeat UC Davis on rivalry weekend. … Northern Colorado travels to Weber State to finish its season. … There wasn’t a Brawl of the Wild last season, so this one probably counts as two. With Montana State poised to finish in no worse than a tie atop the conference standings, it means more to the Bobcats and Montana. Especially since the Griz have been stuck in a near-record-setting funk in the rivalry. … In basketball, Montana’s former women’s coach, Shannon Schweyen, has sued the school alleging sexual discrimination. … The Northern Arizona men rolled to a win last night. … Idaho State is not playing up to expectations just yet. Seahawks: Larry Weir’s guest on the latest Press Box podcast is Alyssa Charlston. They talk all things Seattle (and more), including the Hawks. … Could recently released running back Le’Veon Bell help with Seattle’s rushing woes? … What’s next for Pete Carroll and the Seahawks? … Russell Wilson believes he can help fix their woes. It starts with Arizona this weekend.

Mariners: Yes, Servais should have won the Manager of the Year Award. But he probably would be happy if Jerry Dipoto awards him an improved roster.

Kraken: Seattle has a chance to get healthy against Chicago.

• It’s sort of cathartic to talk baseball on a morning in which the dogs’ outside water dish froze solid overnight. Spring training can’t come fast enough. Actually, what spring brings outside of baseball is what we look forward to each winter. Warmth. The ability to wear shorts every day. To leave the house without a jacket. Or a care. Oh well, it will be back soon enough. Until later …