Drive around Spokane long enough and you’re bound to see it: a semitruck wedged under one of the city’s bridges because the rig is just a bit too tall to make the clearance.

That the heights are posted on the bridges doesn’t seem to catch the attention of every driver, and dozens of trucks have gotten stuck in the past decade.

Now the city of Spokane is trying a new, noisy solution to this problem.

If the top of the truck hits the chimes, it makes a loud noise, warning the driver that the vehicle won’t clear the 13-foot-8-inch viaduct ahead, said Spokane Public Works Director Marlene Feist.

“Think of them as sort of chimes up there,” Feist said.

She said trucks have hit the bottom of the Sprague/Division overpass several times over the years. The chimes were installed as part of the East Sprague Avenue reconstruction project.

The chimes are the only ones of their kind in the city.

On Altamont Street, a blinking light warns truck drivers of a bridge ahead near Playfair Commerce Park. A similar light warning has been installed on Stevens Street in downtown, just before the railroad viaduct. But as Feist noted, trucks have hit the height warning sign on the Stevens bridge, leading the city to believe that the addition of sound effects from the chimes might do the trick.

Feist said the city saw the use of chimes in another city and decided to give it a go near the Sprague overpass.

The Spokesman-Review, citing data collected by the city, reported in April 2018 that there had been 108 collisions between tall trucks and Spokane bridges in the previous 10 years.

The most recent collision was last week when a semitruck got wedged under the bridge at Napa Street and Trent Avenue, bringing car and train traffic to a halt for a couple of hours.

Stopping rail traffic can be costly, and the financial burden falls on the truck driver, or trucking company.

BNSF Railways, which owns the tracks and bridges in Spokane, stops all traffic on the mainline route after a viaduct collision, and a bridge inspector and rail inspector are called in to survey the damage, according to the 2018 Spokesman-Review story.

Railways rely on strict timetables and engineers and conductors can only work a certain number of hours, the 2018 story said. The truck driver could be on the hook for thousands of dollars to pay for the train delays, especially if another crew from outside the area has to replace the delayed crew.

The trucking company also needs to pay the fine for failing to obey a traffic control device and expensive towing fees, which could cost thousands of dollars as well. 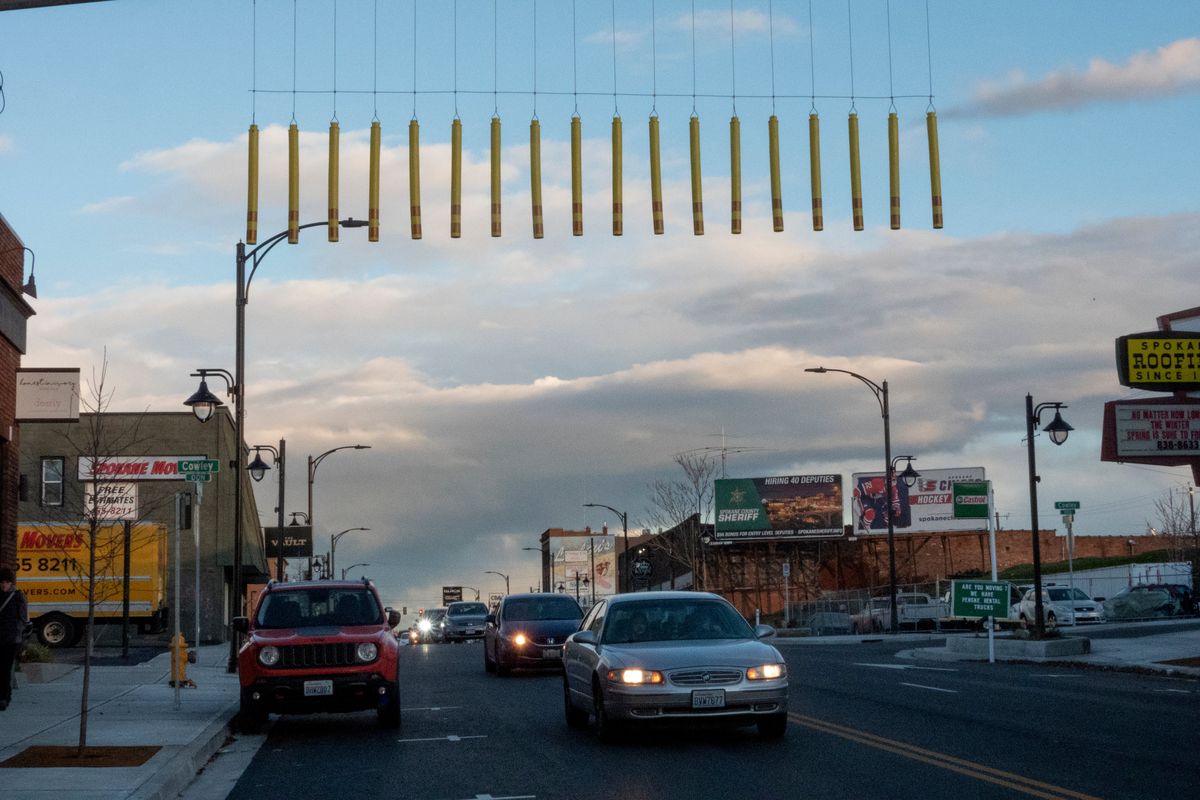 A string of plastic tubes hanging above East Sprague are designed to tap the roofs of tall trucks to warn the driver that they are approaching a low bridge where the train tracks cross Sprague Avenue and Division Street, shown Tuesday, Nov. 16, 2021. The railroad trestles that cars must pass under are 13-foot 8 inches above the roadway. (Jesse Tinsley/The Spokesman-Review)