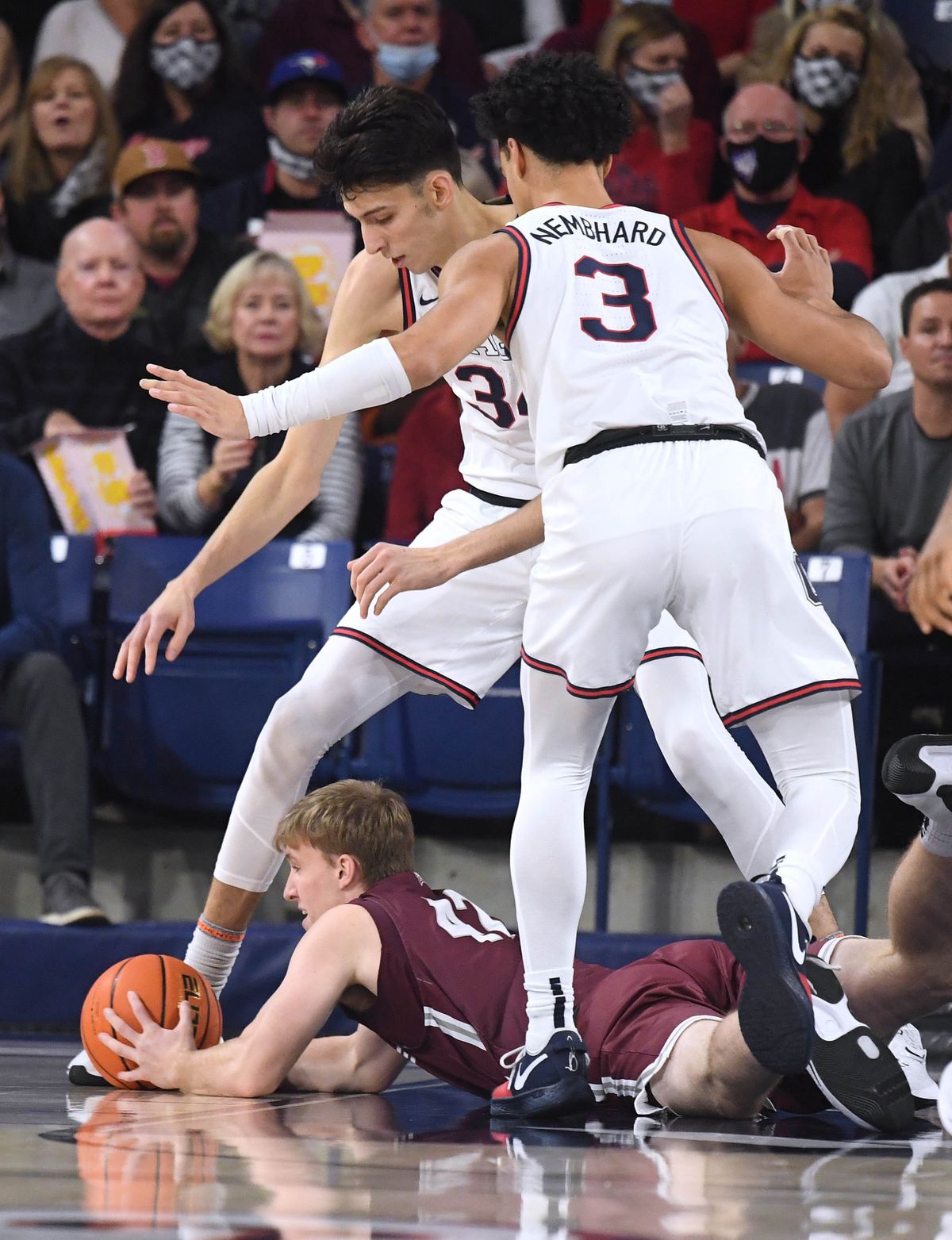 Gonzaga center Chet Holmgren (34) and Gonzaga guard Andrew Nembhard (3) tower over Bellarmine forward Curt Hopf (42) as he scrambles for a loose ball during the first half of an NCAA college basketball game, Friday, Nov. 19, 2021, in the McCarthey Athletic Center. (COLIN MULVANY/THE SPOKESMAN-REVIEW)

Another night, another new career-high set.

The Bulldogs shot 53% from the floor and a solid 81% from the line. They outrebounded the Knights 40-20.

The other Zag to finish in double figures was Chet Holmgren, who added 18 points and five assists.

Bellarmine ran an offense who focus on passing the ball over dribbling. It took half of the first period before the Zags worked out the Knights’ offense. The rout was on after that.

Next, the Bulldogs head to Las Vegas for the Good Sam Empire Classic. They play Central Michigan on Monday at 8 p.m., then UCLA on Tuesday at 7 p.m. Both games are at the T-Mobile Arena and on the ESPN networks.

Chet Holmgren was in eighth grade when he went through the growth spurt that transformed a 6-foot-4 middle-schooler into the 7-foot lob threat who’d go on to win four consecutive state championships at Minnehaha Academy in Minnesota and claim the No. 1 ranking among high school prospects. | Read more

Another day, another milestone for Drew Timme. | Read more

13:14: Bellarmine 11, GU 10: Drew Timme knocks down his first 3-pointer of the season, something he had worked on in the offseason. The rest of the team is 1-for-6 from behind the arc. So far, the Zags have been neutral against the pass-first Bellarmine offense. Some confusing moments, with some Knights getting open on easy shots, but the Bulldogs have also forced a shot clock violation.

11:57: GU 15, Bellarmine 11: The Bulldogs are trying to find the momentum to pull away. The student section has been rowdy early on, but the Knights are still hanging around. GU is on an 5-0 run over a 2:11 span. Juston Betz leads Bellarmine with five points. Julian Strawther leads the Zags with six points.

7:55: GU 25, Bellarmine 15: A rare Nembhard turnover puts the game into the under-8 media timeout. Nembhard also has six assists. Strawther has nine points on 3-for-4 shooting from the floor. The Zags have clamped down on the defensive end, while heating up from the floor.

3:08: GU 38, Bellarmine 27: A massive alley-oop from Hickman to Holmgren gets the Kennel raucous. Timme has woken up a bit with 11 points. He has now scored 1,000 points in his college career.

:45: GU 46, Bellarmine 28: Strawther is putting together another solid game. He has 14 points and five rebounds. It appears he is making a jump in his second season. GU is expanding the gap between it and the Knights.

15:48: GU 57, Bellarmine 33: The Bulldogs have put up nine point since the break, with Timme leading the charge (four points). Nembhard had a 3 and Holmgren with a dunk.

11:39: GU 66, Bellarmine 37: The Knights haven’t scored in almost three minutes. Timme is up to 25 points. He is shooting 70% from the floor. Before play resumes, the Zags have brought on Hickman, Sallis and Gregg. Starters get a rest.

7:43: GU 76, Bellarmine 39: This GU team is athletic. Sallis tips a shot and takes it to the other coast for a one-handed slam that jumpstarts the Kennel. The Bulldogs are on a 16-2 run. They have forced the Knights into six turnovers in the last 7 minutes and 17 overall.

3:56: GU 89, Bellarmine 42: Strawther with a new career-high 19 points. At one point, GU hit three-straight 3-pointers and 10 of its last 18. Bench is starting to empty. Perry and Arlauskas on for Strawther and Watson, who fouled out.

The Zags are up 48-28 at the half behind 14 points from both Strawther and Timme. Strawther has 15 at the break against Alcorn State.

On offense, GU is shooting 57% from the floor and on defense, it is holding Bellarmine to 17% from 3.

From inside the arc, the Knights are shooting a respectable 46%, but a lack of 3’s and only two points from the line are holding them back. Dylan Penn leads Bellarmine with 14 points.

It was slow going early in the first half, but some big time plays by the Bulldogs have made big-time plays to energize the crowd.

Gonzaga kept with the same starting five of Nembhard, Bolton, Strawther, Timme and Holmgren it has been using to start the season.

It may be the biggest upset of the 2021-22 college basketball season if Bellarmine walks out of the Kennel with a win.

No. 1 Gonzaga (3-0) is a 31 point favorite against the Knights (0-3) tonight at 6 p.m. on KHQ/Root to conclude a four-game homestand that featured the Bulldogs’ dominate win over No. 8 Texas.

After tonight’s game, the Zags will travel to Las Vegas to play Central Michigan on Monday, No. 2 UCLA on Tuesday and No. 7 Duke next Friday.

This will be the first time Gonzaga has played Bellarmine in basketball. The Knight’s program was formed in 1950, recently jumping from Division II to DI by joining the ASUN Conference in 2019.

The Knights finished No. 2 in the ASUN in 2020-21 during its first season at the DI level, qualifying for the CBI Tournament and losing in the semi-final to Pepperdine 82-71.

Gonzaga big favorites against Bellarmine, which is coming off narrow loss to Saint Mary’s

At first glance, Gonzaga-Bellarmine sets up as a milestone watch – Drew Timme is 11 points from 1,000 in his career – and another tuneup for the Zags before two heavyweight bouts next week in Las Vegas. It certainly could turn out that way, but Bellarmine’s determined effort in a 73-64 road loss to Saint Mary’s on Wednesday – the 15.5-point underdog Knights led 55-54 near the 5-minute mark – showed the visitors from Louisville, Kentucky, can compete with an upper echelon WCC team. | Read more

ESPN’s Dick Vitale to return for showdown between No. 1 Gonzaga, No. 2 UCLA

It’s already a Final Four rematch that will likely serve as a meeting between the country’s top-ranked teams. Now a national audience has a third reason to tune in to next week’s showdown between No. 1 Gonzaga and No. 2 UCLA. | Read more

Freshman Hunter Sallis is just three games into his Gonzaga career, but he’s already showing many of the qualities that made him a five-star recruit. | Read more