Tara VanDerveer will walk onto the McCarthey Athletic Center floor Sunday afternoon not only as a defending NCAA champion, but also as a champion of the game of basketball.

It hardly seems possible, but her stature grew this year. Already a Hall of Famer and Olympic champion, the longtime Stanford coach cut down the nets last April in San Antonio.

It was her third NCAA title, this one made all the sweeter by the hard work that went into it by her players – two of them from Spokane, Lacie and Lexie Hull – her staff and VanDerveer herself in a career that began more than four decades ago at the University of Idaho.

Yet victory should have tasted sweeter. 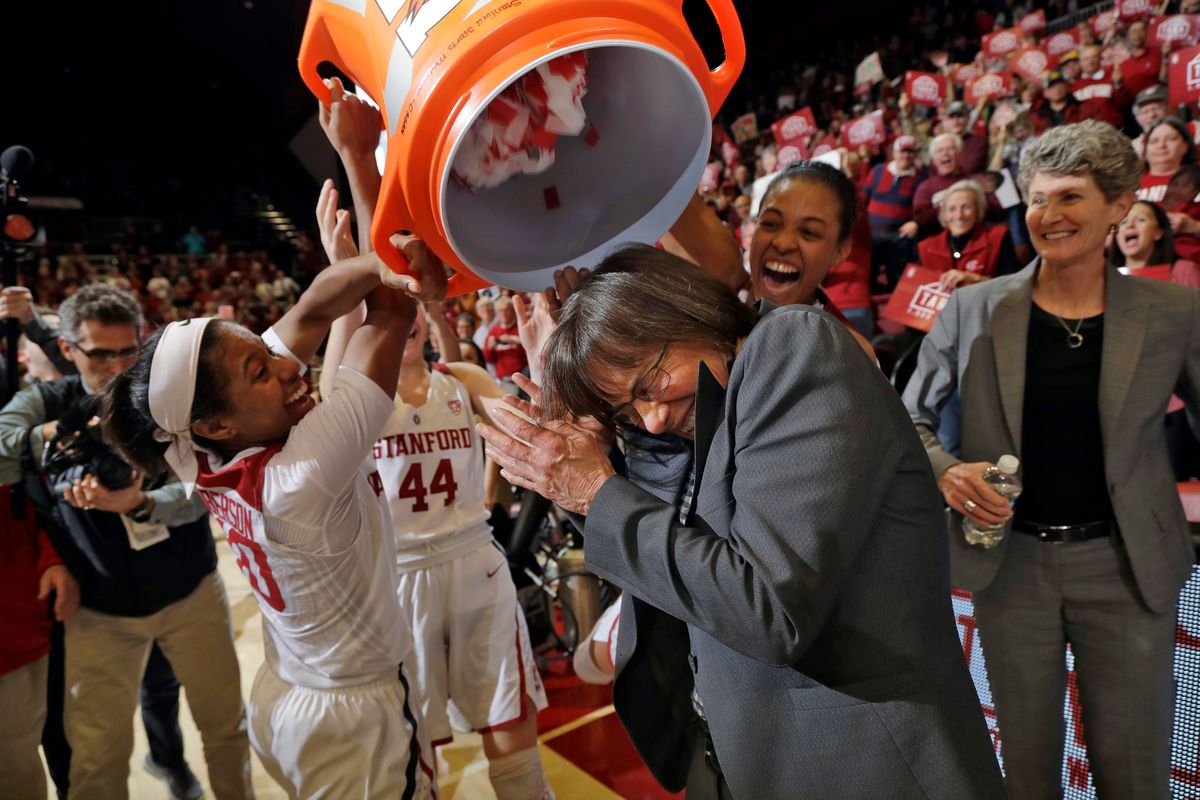 As 64 women’s teams gathered for the NCAA women’s tournament in Texas, they found unequal treatment everywhere.

Among them were the Bulldogs of Gonzaga coached by Lisa Fortier, a northern California native who once worked camps for VanDerveer and will face her mentor on Sunday.

Players tweeted photos showing weight-room equipment more appropriate to a low-budget motel than the biggest event in the sport. Meals and gift bags were inferior to those provided to the men at their tournament in the Indianapolis area.

Even the NCAA’s trademarked “March Madness” slogan was reserved only for the guys.

But the greatest insult was directed at the players, VanDerveer said. They were quarantined and tested every day for COVID-19, but only with the inferior antigen tests. The men were given the more effective PCR test.

“This is setting a horrible example as education institutions,” VanDerveer told The Spokesman-Review last week.

“I’ve said it before: It’s steak for the boys, hot dogs for the girls,” VanDerveer said. “We are being very disrespectful to women, and it sends a very bad message to women athletes that they are not valued the same.”

Having cut down the nets, VanDerveer spent part of the summer slicing into the NCAA. Along with South Carolina coach Dawn Staley, she called for congressional involvement regarding the NCAA’s treatment of its tournaments for women’s sports.

An external report found evidence of “systemic gender inequity issues” at the NCAA.

“With respect to women’s basketball, the NCAA has not lived up to its stated commitment to ‘diversity, inclusion and gender equity among its student-athletes, coaches and administrators,’ ” the report states.

The report describes the undervaluing of women’s teams as “perpetuating a mistaken narrative that women’s basketball is destined to be a ‘money loser’ year after year. Nothing could be further from the truth.”

That was confirmation for VanDerveer that the NCAA used “creative accounting” to attempt to justify its unequal treatment of men’s and women’s sports and not just basketball.

VanDerveer still bristles at those numbers and their implication that women’s athletes “are like little rats that are stealing the grain.”

For the 68-year-old VanDerveer, the struggle predates the 1972 enactment of Title IX, which prohibits sex-based discrimination by any school which receives federal money.

“You’d like to think that you don’t need a law to be fair,” VanDerveer said.

Raised in upstate New York, she recalled occasional “play days” for the girls, but no athletic teams. She played one season at the University of Albany.

“To use the word ‘varsity,’ we’re being kind. We called it ‘varsity,’ ” she told the Schenectady Times-Union last month. “You wore like a gym suit, maybe a uniform. … You bought your own shoes. You traveled in vans. We might have played like a seven-game regular-season schedule.”

Transferring to Indiana University, VanDerveer played for three years but never got a scholarship. She waited tables to help pay her tuition and shared an apartment with three teammates.

But by then, Title IX was a reality, if only in name.

After two years as a graduate assistant at Ohio State University, that journey took her to the University of Idaho and her first head coaching job.

She was only 24 when she was hired by UI women’s administrator Kathy Clark with the blessing of athletic director Bill Belknap.

VanDerveer had no head coaching experience, but few women did at the time.

UI’s women’s program was only five years old and had won just 18 of 56 games.

VanDerveer turned things around immediately, going 42-14 in her two years and reaching the NCAAs in her second year.

“It was a great experience,” VanDerveer said last week. “I was very fortunate, and they were so supportive, and we’d get 2,000 people in the Kibbie Dome for games.”

“It was such a beautiful place, and great people,” VanDerveer said. “I think I cried all the way back to Ohio.”

Opportunity called her back to Ohio State, where she took the Buckeyes to four NCAA tournaments in five years.

In 1988, VanDerveer went West for good and built a rock-solid program at Stanford.

With a coaching tree that stretches across the country, she’s also laid the groundwork for others.

“She does things the right way,” Fortier said, “and she’s really passionate about what she does.”