LAS VEGAS – The sequel rarely lives up to the original, but Gonzaga’s performance Tuesday night at T-Mobile Arena was a showstopper.

UCLA, meanwhile, was reduced to pretty much a no-show.

There was no need for a magical bank shot from 40 feet this time, no overtime, no trip to the NCAA championship game on the line.

This came down to a dazzling first half of pinpoint execution, smothering defense and an eye-opening demonstration of just how large the gulf is between No. 1 Gonzaga and No. 2 UCLA right now.

Seven months ago, the teams staged an epic contest in Indianapolis decided by Jalen Suggs’ last-second shot in a national semifinal.

Seven months later, UCLA, with nearly all of its best players back, couldn’t keep up with Gonzaga, which has effectively mixed newcomers in with returning standouts Drew Timme and Andrew Nembhard.

In the first No. 1-vs. No. 2 battle of West teams, the Zag wearing No. 3 was the biggest difference maker. Nembhard put on a clinic in the opening half, triggering Gonzaga’s running game and playing solid defense on UCLA’s top scorer Johnny Juzang at the other end.

“Our transition game was really good in that first half,” Zags coach Mark Few said. “UCLA is tough to score on in the half court, and Mick (Cronin, UCLA coach) does a great job of switching up their coverages. They have a real toughness about them, so it was important for us to get out and run and get those baskets before their half-court defense was set up.”

Nembhard, whom Cronin called the “best player on the floor, hands down,” and the Zags ran at every opportunity while building a 33-10 lead that prompted the Bruins to call three timeouts to try to slow Gonzaga’s momentum.

“That was one of the most effective ways we scored the ball,” Nembhard said. “We just tried to get out in transition as much as possible.”

Gonzaga’s rim protection – Chet Holmgren had three first-half blocks to set the tone – bothered UCLA most of the first half. The Bruins had no luck from distance either, hitting just 1 of 9 3s.

Fastbreak points in the first half – Gonzaga 14, UCLA 0 – told the story.

Nemhbard raced in for back-to-back layups and Holmgren yanked down a rebound, dribbled down the court and around 6-foot-10 Bruins center Myles Johnson for a layup.

“We’re at our best when we play defense and turn that into offense,” Timme said. “I thought we had great team defense, whether it was rotations or chokedowns and even just 1-on-1 defense. It’s something coach has been hammering all the time.”

Here’s how it went for UCLA’s top four scoring options: Juzang, who scored 29 points against GU at the Final Four, had a quiet seven points in the first half. Jaquez, defended by Timme, missed his first six shots before connecting on a midrange jumper.

Point guard Tyger Campbell’s first bucket came with 2 minutes left in the half. Jules Bernard, who averages 15.4 points, had two first-half points on 1-of-6 shooting.

“Andrew is a very, very underrated defender both on and off the ball,” Few said. “Juzang, to hold him down, he’s a big-time scorer.”

The Zags, much like the Texas game, weren’t quite as sharp in the second half, but they had plenty of cushion with which to work. The Bruins began to find their offensive footing, but the Zags usually had an answer.

“I’ve been telling the guys that cover us, this has been coming since the beginning of the season,” Cronin said. “We’re not a good defensive team, and we got exposed by a great team.

The Zags did it with flare. Holmgren swatted a Bruins shot near the rim and went coast-to-coast for a two-handed dunk. Nembhard soon followed with a between-the-legs dribble that sent Juzang stumbling to one knee near the free-throw line. The senior guard calmly buried a 3-pointer.

Nembhard, who finished with 24 points, six assists and five rebounds, was named tournament MVP and was joined on the all-tournament team by Holmgren and Timme.

Timme had 18 points and eight rebounds. Holmgren contributed 15 points, six boards and four blocks. Gonzaga made 56% from the field, nearly matching its shooting percentage against the Bruins in April. UCLA heated up a little in the second but still made just 35% overall. 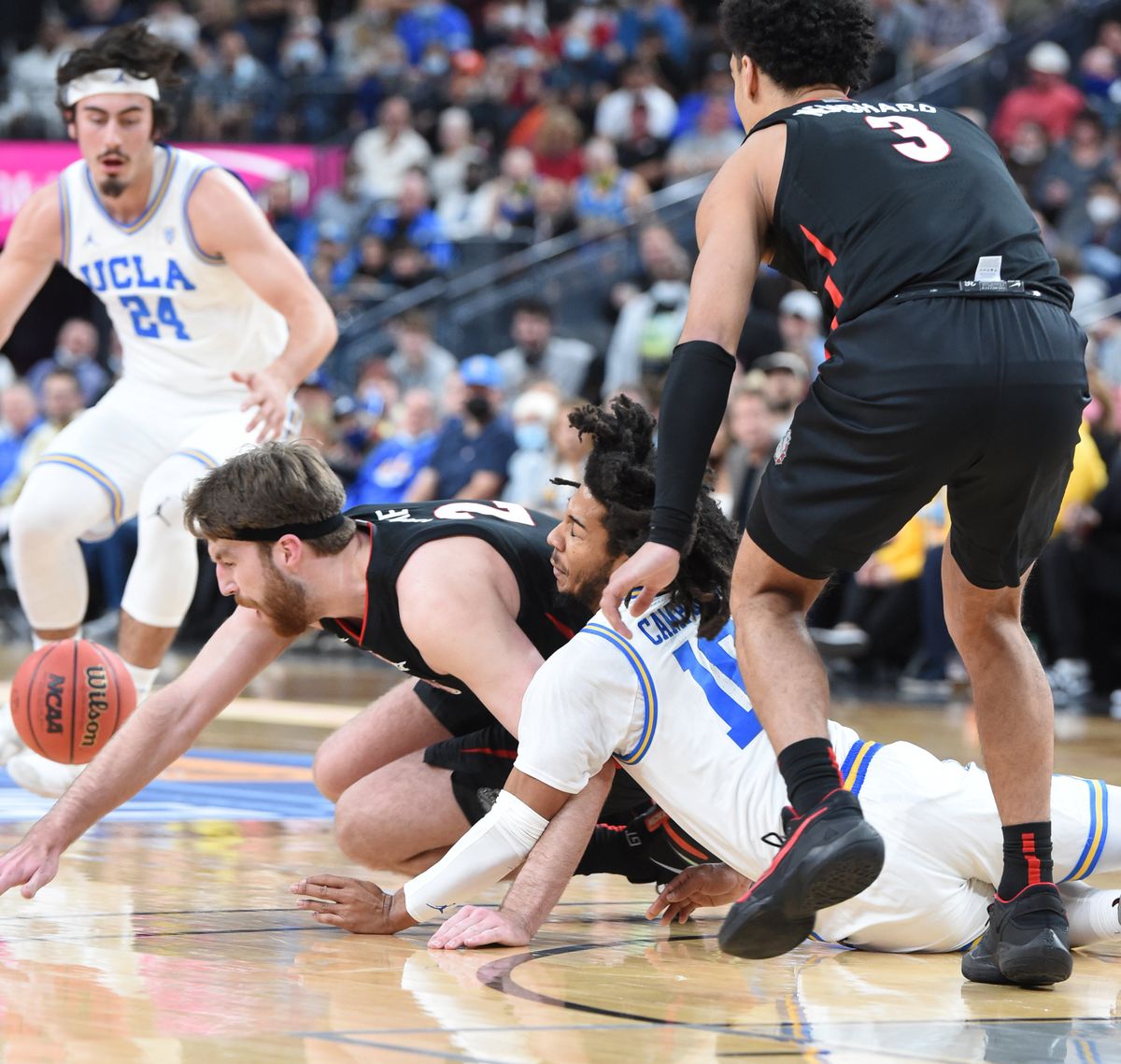