Gonzaga Prep’s parking lots were bustling Wednesday morning with hundreds of students loading bags and carts full of food into vehicles to be distributed to Spokane-area families in need.

The Gonzaga Prep Thanksgiving Food Drive collected more than 100,000 pounds of food. Three hundred turkeys and 320 pumpkin pies were purchased with financial donations from students, according to the school’s Christian Service department. 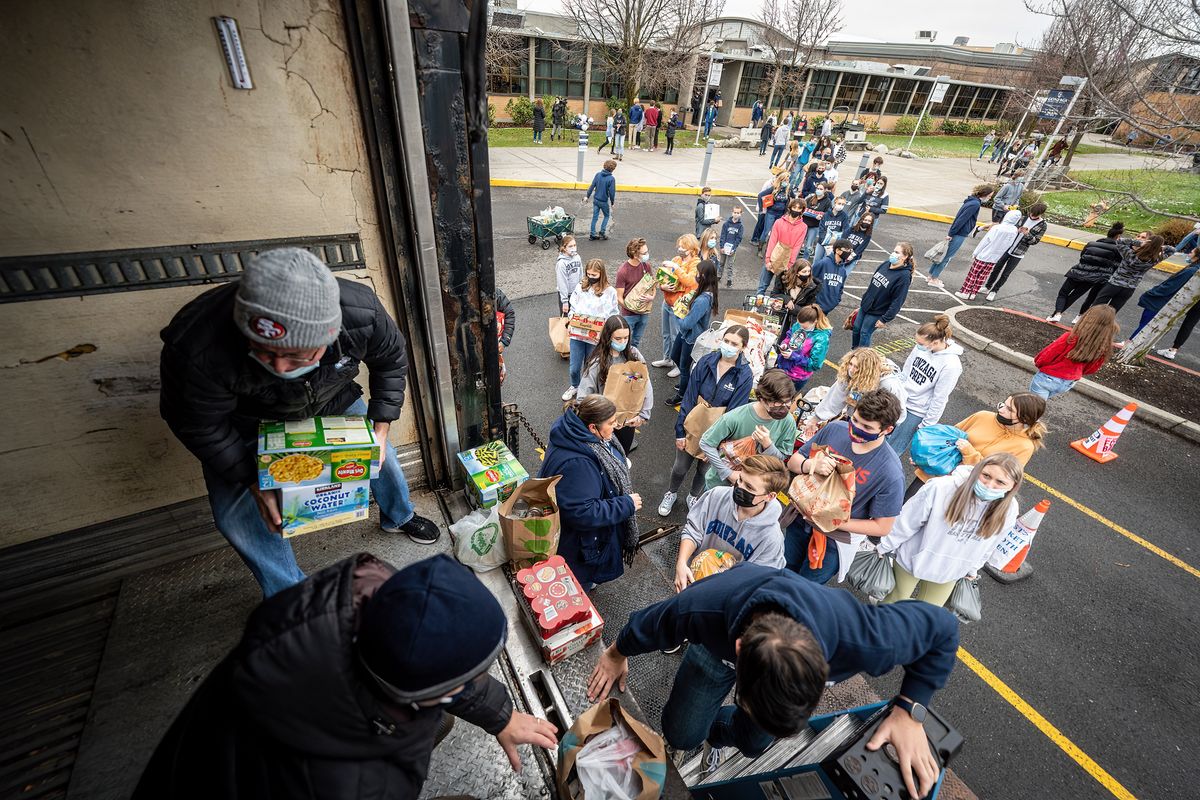 “We really all feel obligated to give back to the community that we live in, that we participate in, that we benefit from,” said Ewan McFetridge, a senior on the food drive committee.

Gonzaga Prep students have been collecting food from their neighbors, outside grocery stores and from parents’ workplaces since the beginning of the month.

Wednesday was delivery day, in which students, faculty, staff, parents and alumni distributed the food. The donations also will support the Confederated Tribes of the Colville Reservation, food pantries and Second Harvest food bank.

“It’s the end goal for our past three weeks of work,” McFetridge said. “Today is really the huge payoff for what we’ve been working toward for almost a month now.”

Elizabeth Slamkowski, director of Christian Service at Gonzaga Prep, said the goal is to provide each family with one month’s worth of food.

Slamkowski said Spokane families are more in need of food this year.

Feeding America, a nonprofit network of food banks, defines food insecurity as “a lack of consistent access to enough food for every person in a household to live an active, healthy life.”

McFetridge said he joined the school’s food drive committee because the drive was a highlight of his freshman year. He said he hoped taking the leadership position would allow him to help make the drive into what he knows it can be, “which is the best experience you can have as a student at Gonzaga Prep,” he said.

“It’s fun to see the freshmen coming in and not knowing what the food drive is all about and then that progression through their sophomore, junior and senior years and see that contagious enthusiasm,” said Gina Pinnock, the school’s communications coordinator.

Cooper Loney, another senior on the food drive committee, said bringing food to a woman during his freshman year food drive brought tears to her eyes because she was so thankful for it. The impact on the woman persuaded him to join the committee.

“The whole point of Prep is community,” Loney said. “You ask any alum, anybody, what’s your favorite part of Prep, and they always say community. So the whole aspect is to give back, and that’s the primary focus of this.”

Daisy Matsumoto, a senior on the food drive committee, said the drive aligns with the school’s “Profile of the Graduate,” which “touches every aspect of life at Gonzaga Prep,” according to the profile’s statement.

The five characteristics of the profile are “open to growth,” “intellectually engaged,” “religiously alive,” “loving” and “committed to doing justice.”

“I think the food drive takes all of those,” Matsumoto said.