A GRIP ON SPORTS • It’s not codified in any books, including those that line the walls at Gonzaga’s law school. But there is one of those unwritten rules of sports writing about this day. It is one in which we must obey. We’ve got a column filled with sports items for which we are thankful. And they are in no particular order.

• Last summer I played golf just a handful of times. But during one of those rounds, I made a twisting, breaking 30-foot putt for an unexpected birdie at Circling Raven. I am so grateful I can live off that memory for another winter.

• Every chance I get before basketball practice, I find the dry mop and clean the floor. Why would I be thankful for such a mundane chore? Two reasons. I like that, even at my age, I still can, without hurting too much. And I love being able to serve those I coach in such a small yet significant way. It’s also a way I honor my father, who always believed in servant leadership before it had a name. 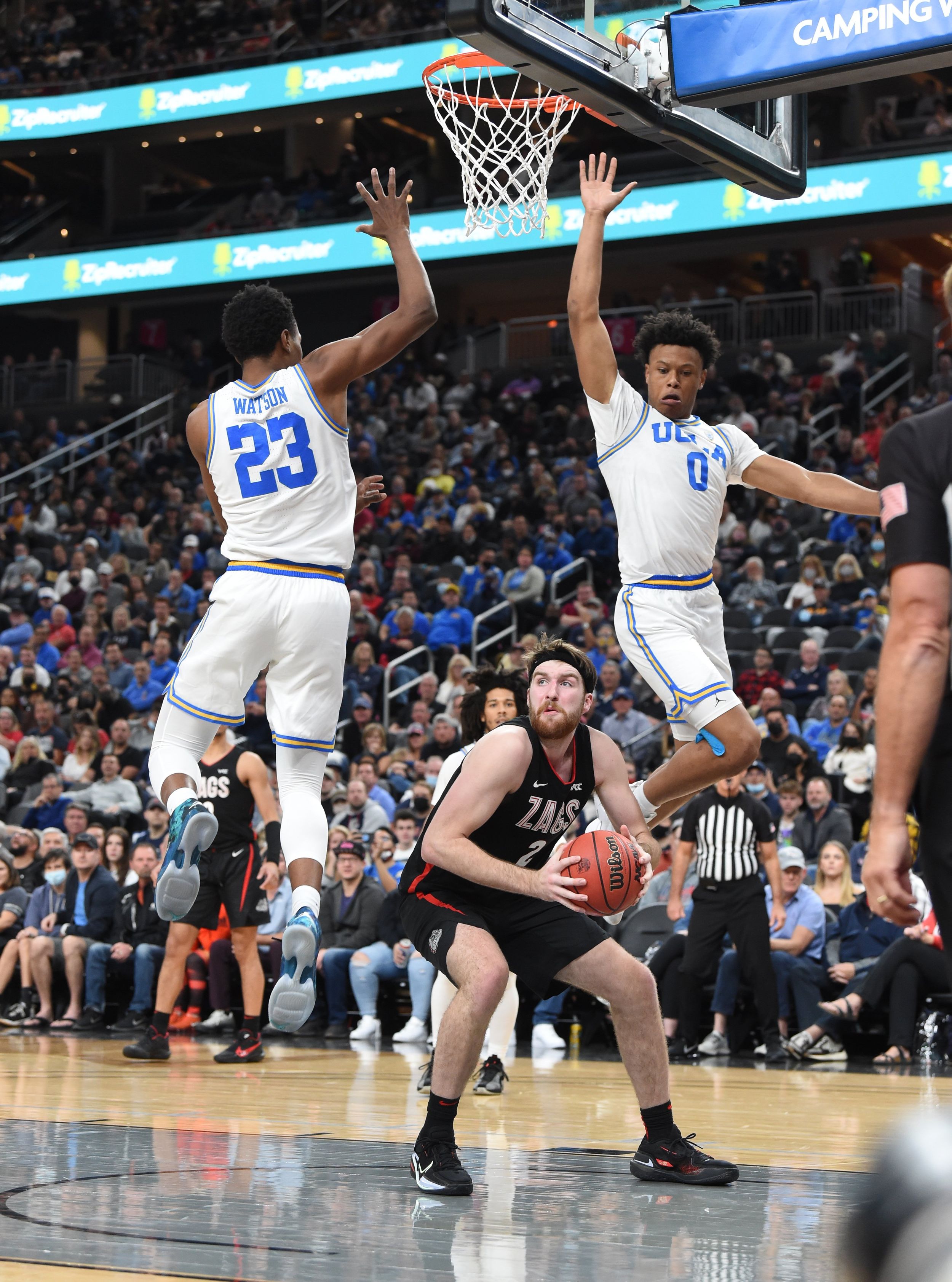 • Gonzaga basketball. Both genders. It’s nice to have a hometown with such basketball excellence.

• Hoopfest. We haven’t had one in a while, which, as Shakespeare noted so many years ago, makes the heart grow fonder. It’s nice to have a hometown event that honors basketball exuberance.

• Though I’ve never partaken of what they have to offer, I am so thankful our area has such excellent ski resorts. Why? Mainly because it keeps a certain segment of the population happy. In the middle of the worst winters, when the snow piles up so high you can’t see the azalea that brightens the front yard in the spring, the neighbors are still smiling. Good for them.

• I still have a good memory. So all of my athletic “accomplishments” are still somewhat fresh. I’m so thankful a former college baseball teammate has retired to Spokane, allowing the chance to get together every few months and touch base about those days. It’s not a Bruce Springsteen song come to life (neither of us could ever throw a speed ball by ya), but it’s close.

• There is a really nice pickle ball court near the homestead. Though Kim and I gave each other all the accouterments of the sport last Christmas, we didn’t find our way to it just yet. However, I’m still thankful it’s there. As I walk by – the park it is in is also my favorite place to take an afternoon stroll – I see people older than me – yes, there are a few – playing. And talking. Laughing. Enjoying the exercise. That’s so cool. 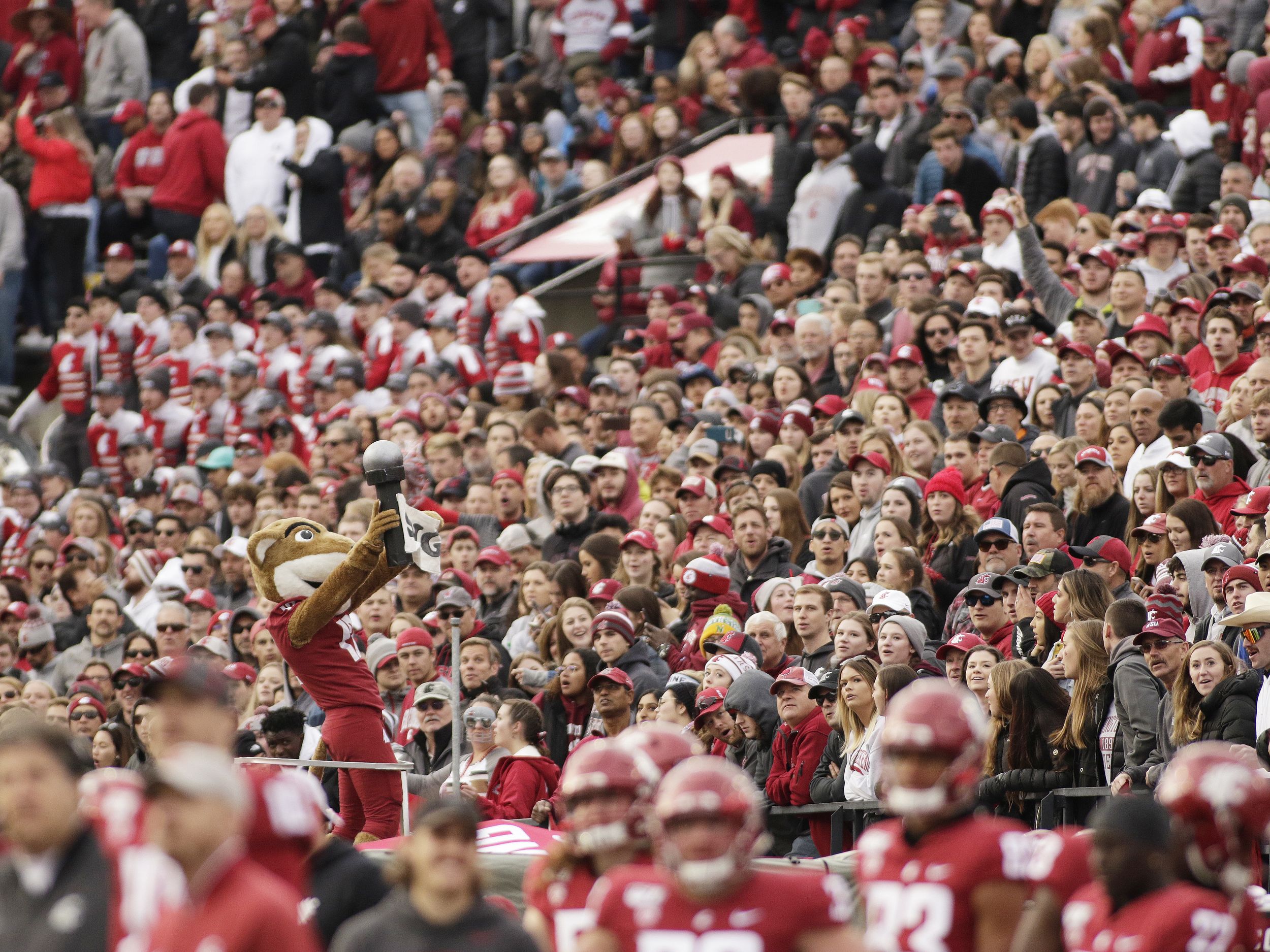 • Washington State football fans are resilient. We’ve been in this area for almost 40 years and, in that time, the Cougars have been great just a couple times. It doesn’t matter. The old Beach Boys song about being true to your school still rings true. This year, they deserve something special to happen, after the river of you-know-what they have had to wade through.

• You may not believe this, but I really appreciate those folks who adjudicate sports. Doesn’t matter which one, but they can’t happen without people willing to step onto a field or court and be criticized no matter what. Sort of like sports columnists.

• It’s good to see Kyle Smith has brought WSU basketball back to a level of excellence not seen in Pullman for a decade or so. Life around here is always better when the Cougars are better in hoop. Now, about remodeling Beasley Coliseum …

• It’s been an awful year for the region’s professional sports teams. Sure, the Mariners exceeded expectations, but, you know, that playoff thing. The Seahawks? Oh my gosh, they are bad. The Sounders played well for much of the summer but certainly didn’t reach the high expectations we all have. The Kraken is new. Not very good, but new. And yet, other than the NBA, the state has professional teams in every league these days. That’s something that deserves a hearty “thanks.”

• Finally, we have to thank you folks. You’re the reason we pull ourselves out of bed every morning before sunrise – this time of year at least – and start banging away at the keyboard. It’s a labor of love. Unrequited love, sometimes, but love nonetheless. And you folks are the target. I hope every morning I can, in some small way, help you connect with the sports you love, whatever they are. And make your life a little better. Thank you for reading. 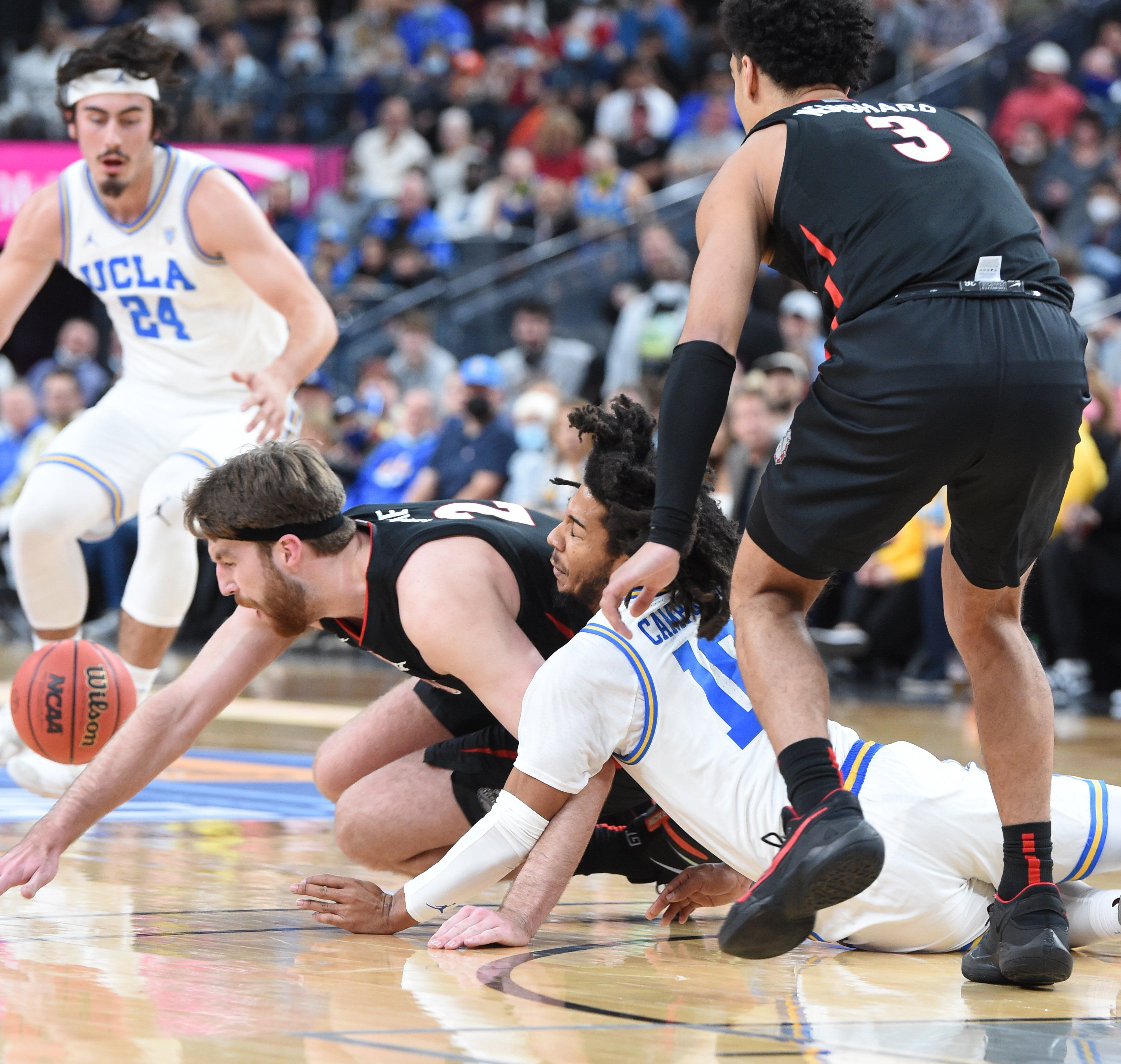 Gonzaga: What did the UCLA win tell us? As UCLA’s Mick Cronin said, Mark Few cares about defense too. And he has the players to execute what he wants to do. The defense’s next test, Duke, comes Frtday. Jim Meehan has other takeaways from the game as well. … Jim has spent more Thanksgivings on the road than he would probably like to admit. Which makes him the perfect guy to write this story about the holiday and the Zags. … Theo Lawson is trying to catch up but it will be a while. He has a story on Julian Strawther’s return home as well as being the special guest on Larry Weir’s latest Press Box podcast. … The women are in Hawaii. Jim Allen has a tournament preview. … Around the WCC, Saint Mary’s finally lost, dropping the final game of the Maui Invitational 61-55 to Wisconsin. … BYU rolled over Texas Southern. 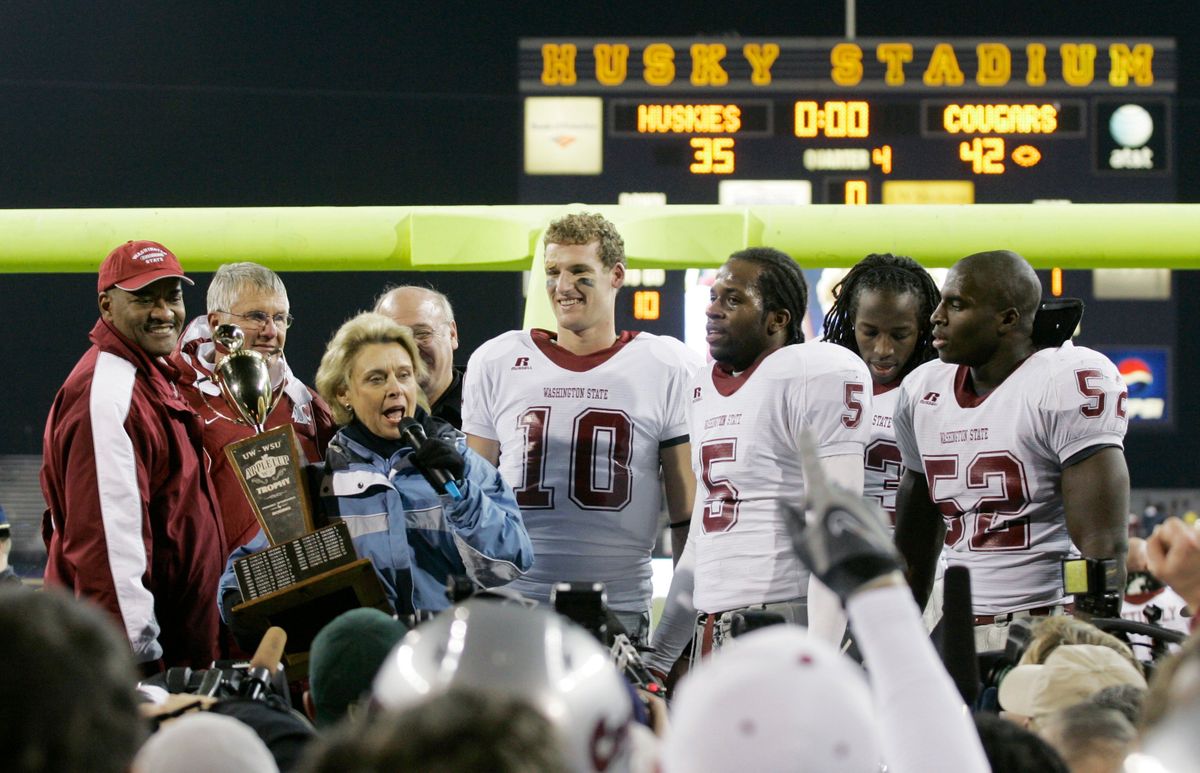 WSU: Remember the last time the Cougars won in Seattle? We do. That would be 2007, in the final game of Bill Doba’s head coaching stint. Colton Clark talked with a few of the folks involved with the game and has this story. … Yesterday it was Abe Lucas. Today Jaylen Watson announced he’s participating in the Senior Bowl. Colton has that story as well. … The next generation of defensive backs added a member yesterday. Colton shares the news a West Side player committed to WSU. … Bob Gregory attended Gonzaga Prep. Walked-on at Washington State. Went into college coaching. And now will be in charge of the Huskies on Friday. Garrett Cabeza has this piece on Gregory’s journey. … Elsewhere in the Pac-12 and college football, Jon Wilner picks this weekend’s games in the Mercury News. He has the Cougars winning. … Not all the stories from Washington this year are sad ones. And the ones from recent Apple Cups have been really happy. … Oregon State’s offensive line has melded into a cohesive and powerful unit. … Oregon is relying on youngsters due to some injuries. … Colorado hopes to have a happy ending against Utah, though the Utes are playing better than anyone right now. … Where does UCLA stand as its regular season winds down? … We know the Trojans need to win their final two games to go bowling. … Did we mention the rule about being thankful today? We have this to pass along from Arizona. … Arizona State will lose some key seniors when the season ends. … In basketball news, Wilner has his weekly power rankings. … Arizona has risen in those rankings thanks to its undefeated start, not its fashion sense. … Arizona State fell against Baylor in the Bahamas. … The most-loved player for UCLA is an end-of-the-bench walk-on. … Utah has started the season on a roll but BYU lurks Saturday. … On the opposite end of the ladder is Oregon, which got just steamrolled by Houston last night. … Washington lost to Nevada, which is 0-2 against the WCC this year. … Irony? USC is playing in the Wooden Legacy. … Colorado is dedicated to shooting better. 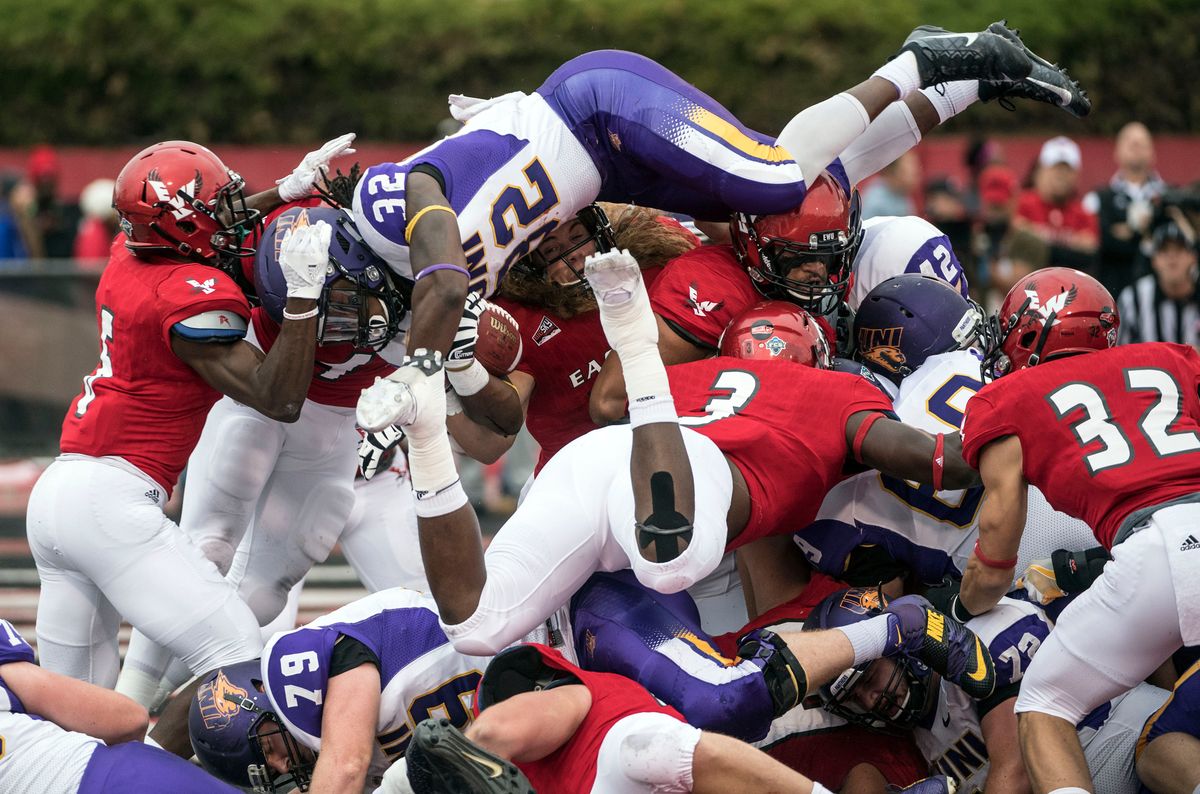 EWU: Here’s another thing we’re thankful for these days. Eastern seems to make the FCS playoffs every season. The Eagles start their 2021 journey Saturday by hosting Northern Iowa, a familiar foe. Dan Thompson looks back at the matchups over the years. … Around the Big Sky, Montana State has to fix its offense before its playoff run begins. … Northern Colorado’s season can’t be completely explained with numbers. … In basketball news, Northern Arizona fell at home to Cal State Fullerton. Any day when the Titans win is a bad day in my book. … Northern Colorado also lost, at San Jose State. … At least Montana won, opening its tournament by handing UC San Diego its first loss. 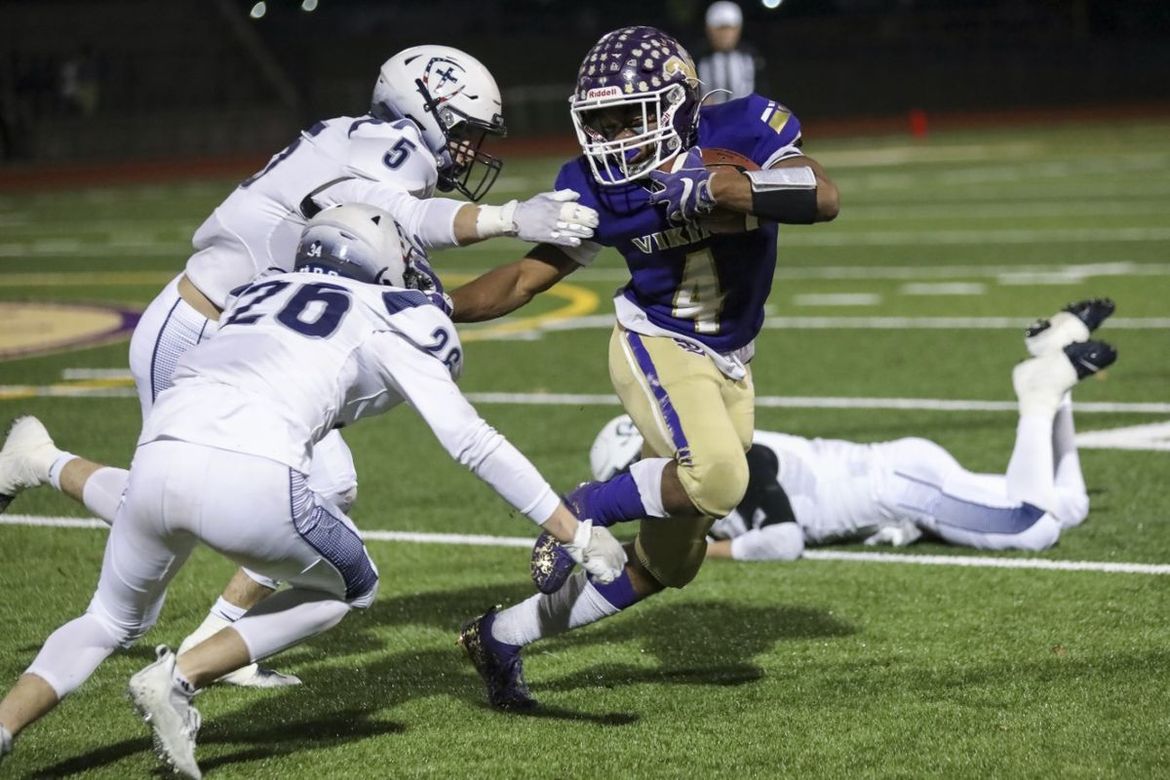 Preps: Dave Nichols takes some time this morning to look back at the recently completed football season.

Chiefs: The six-game losing streak is over. Spokane won at home for the first time this season, topping Kelowna 2-1 Wednesday night. Kevin Dudley was in the Arena and has this story.

Seahawks: We didn’t put this in our list, but Pete Carroll remaining optimistic in the face of this season? We’re thankful for that as well. … He’s also positive about his relationship with Russell Wilson. … D.J. Reed should be back this week against the red-hot Washington Football Team.

Kraken: This might have been the most impressive win of the season. Seattle scored late and won a tight one with Carolina, 2-1. The Climate Pledge Arena crowd loved it.

• For one of the few times in the six decades we’ve been married, Kim won’t be making Thanksgiving dinner. She has worked too hard the past year to spend her rare time off doing such a thing. So I’m doing it. Just kidding. That would be an awful disaster. We are headed to the Davenport for dinner. … By the way, Kim and I married in 1979. So we have been married for parts of six decades. Yep, the ‘70s, ‘80s, ‘90s, ‘00s, ‘10s and now the roaring ‘20s. It sounds o much more impressive than saying we’ve been married for 42 years. I am thankful for everyone of the thousands of days we’ve been together. Until later …