A GRIP ON SPORTS • Apple Cup Friday. In the state of Washington, that seems to have become a tradition unlike any other. Shopping in the morning, leftovers for dinner and watching Washington flummox the Washington State offense.

• Traditions don’t last forever, do they? After all, we don’t ride the ferry across the river to the dueling grounds anymore, do we Mr. Burr? Instead we have rivalry football games and smack talk for 52 weeks. 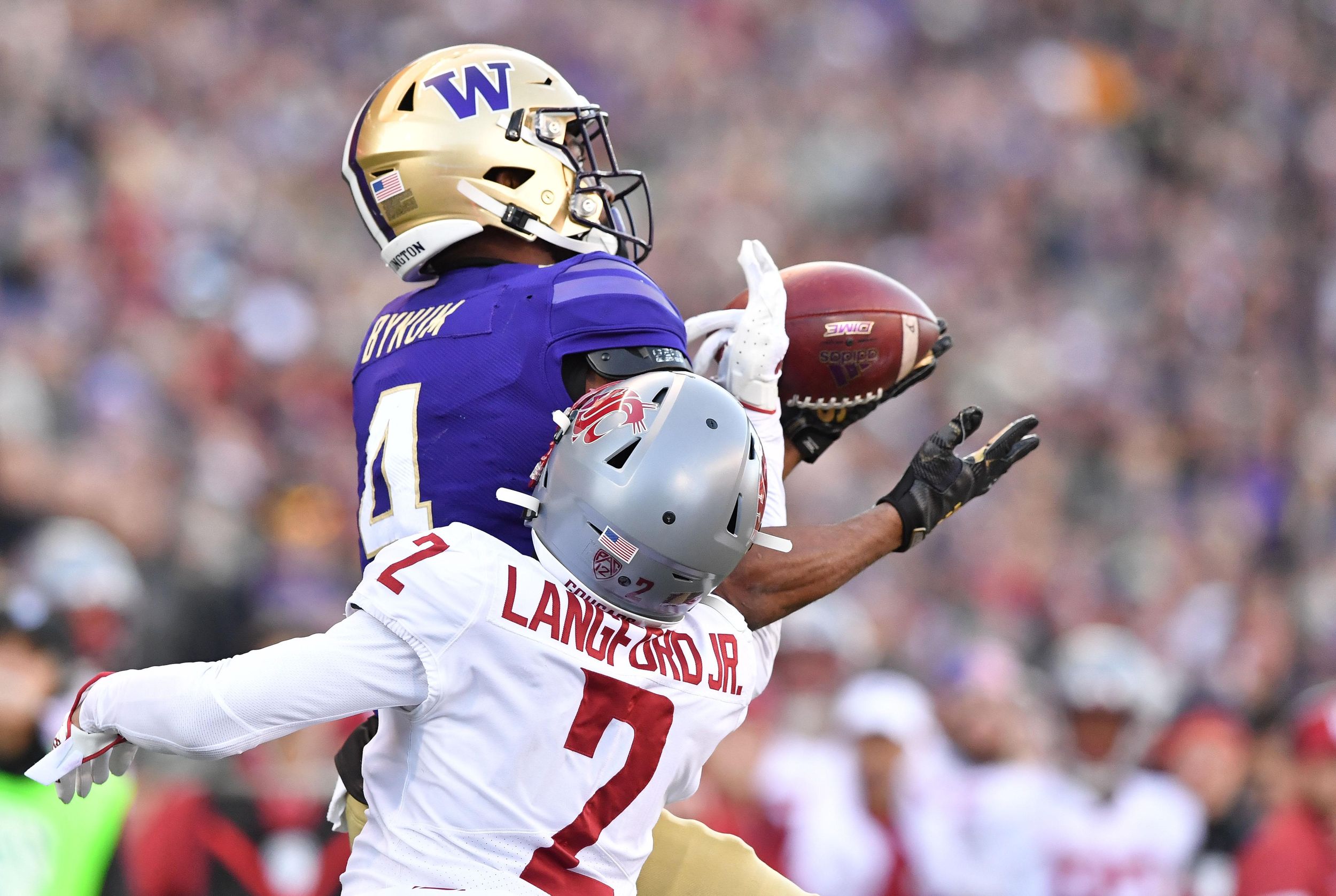 Mike Leach never thought much of this Apple Cup thingee. Or, as yesterday showed, his new team’s non-rivalry game, the Egg Bowl, either. But for Cougar fans, and, to a lesser degree, Husky fans, it’s a big deal. State bragging rights for a year.

This year there is even more on the line. At least for the team from Pullman. There are two dominoes that have to fall for it to happen, but WSU could end up playing in next Friday’s Pac-12 title game. The first domino just happens to be the Cougars winning in Seattle (5 p.m., FS1) for the first time since 2007, when Leach was still employed in Lubbock, Texas.

The second domino? That’s just as historically relevant. See, for Washington State to face Utah with a Rose Bowl berth on the line, Oregon State has to win in Eugene for the first time since … wait for it … 2007.

Who would have thought there would be such cosmic significance with that year?

If both of the 14-year road-losing streaks end, then the Cougars will play their 13th game of the season in Las Vegas. With a chance to earn their first Rose Bowl appearance since Jan. 1, 2003, when they lost to Oklahoma as Mike Price was, in theory, headed to Alabama.

• There is another rivalry game going on tonight. Just kidding. Duke vs. Gonzaga (7:30 p.m., ESPN) in basketball isn’t a rivalry game in any sense of the term. It is, however, a pretty big deal. You know, sort of like Oregon vs. Washington in football. (And yes, I wrote that sentence just to tick off two fanbases. A guy has to have some fun on a Friday morning, right?) 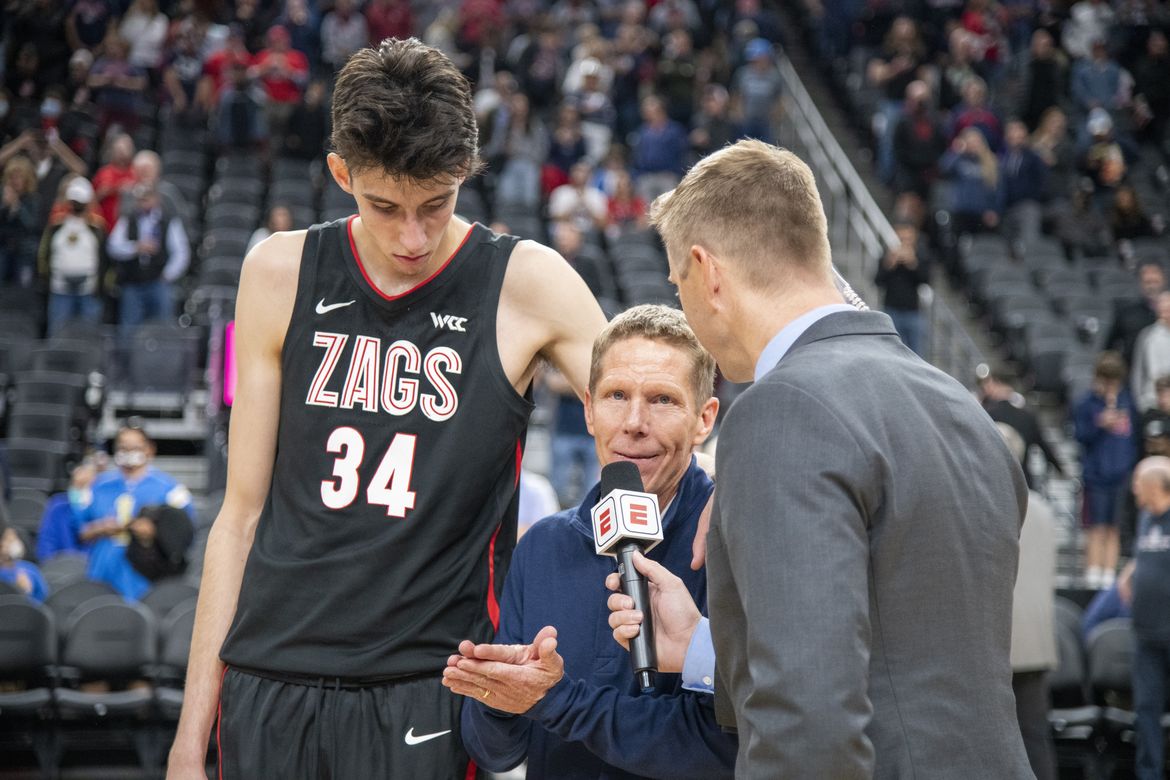 This is the final time Mark Few will face off with Mike Krzyzewski – in the regular season at least. It’s the first (and certainly) only time Chet Holmgren and Paolo Banchero, two of Dick Vitale’s top Diaper Dandies, will meet in a regular-season college game. But most importantly, it’s another chance for the No. 1-ranked Zags to build their resume.

They already hold wins over then-No. 5 Texas and No. 2 UCLA. Now comes a chance to add the fifth-ranked Blue Devils to that list. Three top-10 wins before December would be quite a start.

But Duke won’t be without motivation itself. The Blue Devils were not very good last season and most of their problems occurred on the defensive side. With Banchero and Trevor Keels adding much-needed quickness and strength, they have been better on that end in building a 6-0 record, the same as GU’s.

The level of competition hasn’t been as the same level as GU’s either. Duke opened the season in New York against then-No. 10 Kentucky. The Blue Devils won 79-71. Since then? Five games in Durham against overmatched foes from lesser conferences with average-to-poor offenses.

The numbers point to another Gonzaga win tonight in Las Vegas. So does the betting line, with the Zags favored by at least a touchdown.

But how does that old adage go? Something about throwing out the records in rivalry games. That is probably true in this one.

• Today’s events are so big, we didn’t even do our usual Friday task of looking toward the weekend’s events. It is a holiday weekend, so that seems a bit redundant. And don’t forget, the Seahawks don’t play Sunday. Their game in Washington is Monday night. I’m sure you can find other ways to fill up your weekend. 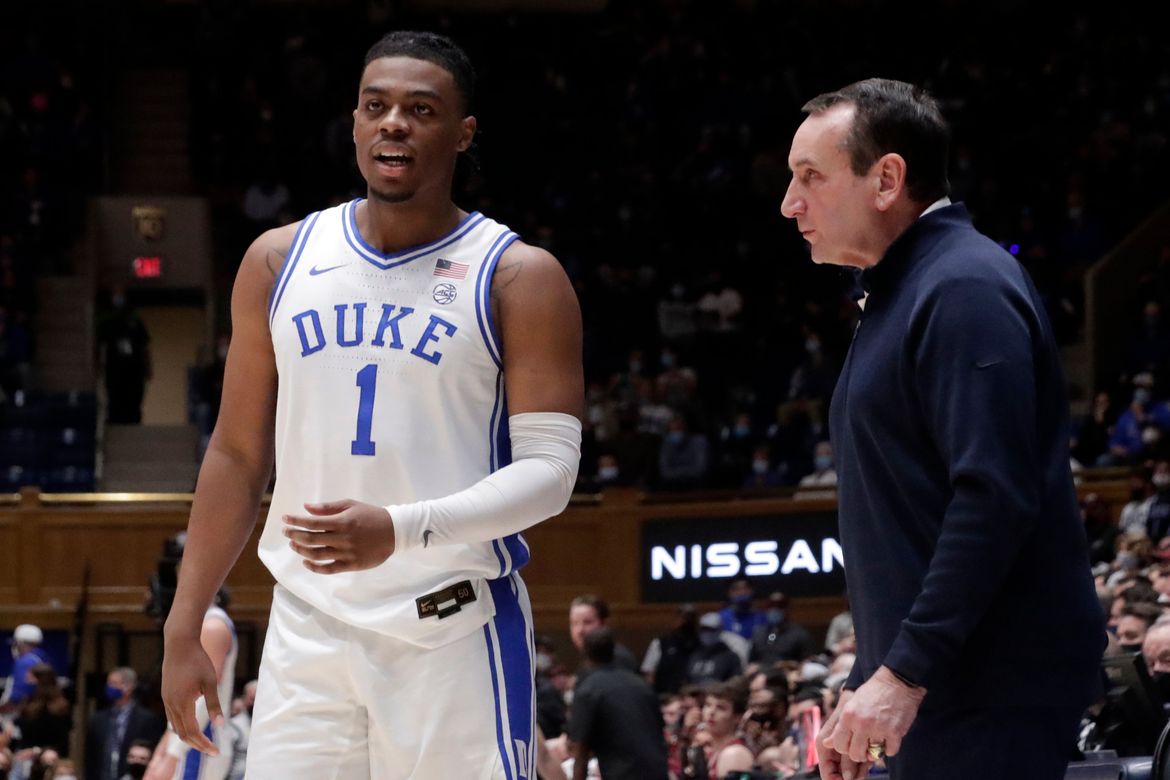 Gonzaga: How many times have Few and Krzyzewski matched up? Three, with college basketball’s winningest coach taking the first two and Few’s team the most recent one. Theo Lawson has that nugget and more in this preview. … He also has the key matchups. … Jim Meehan has been in Vegas a while and has as story on others who have as well. … He also talked with a Duke beat writer for this piece. … Around the WCC, USF is 7-0 after defeating Towson State. 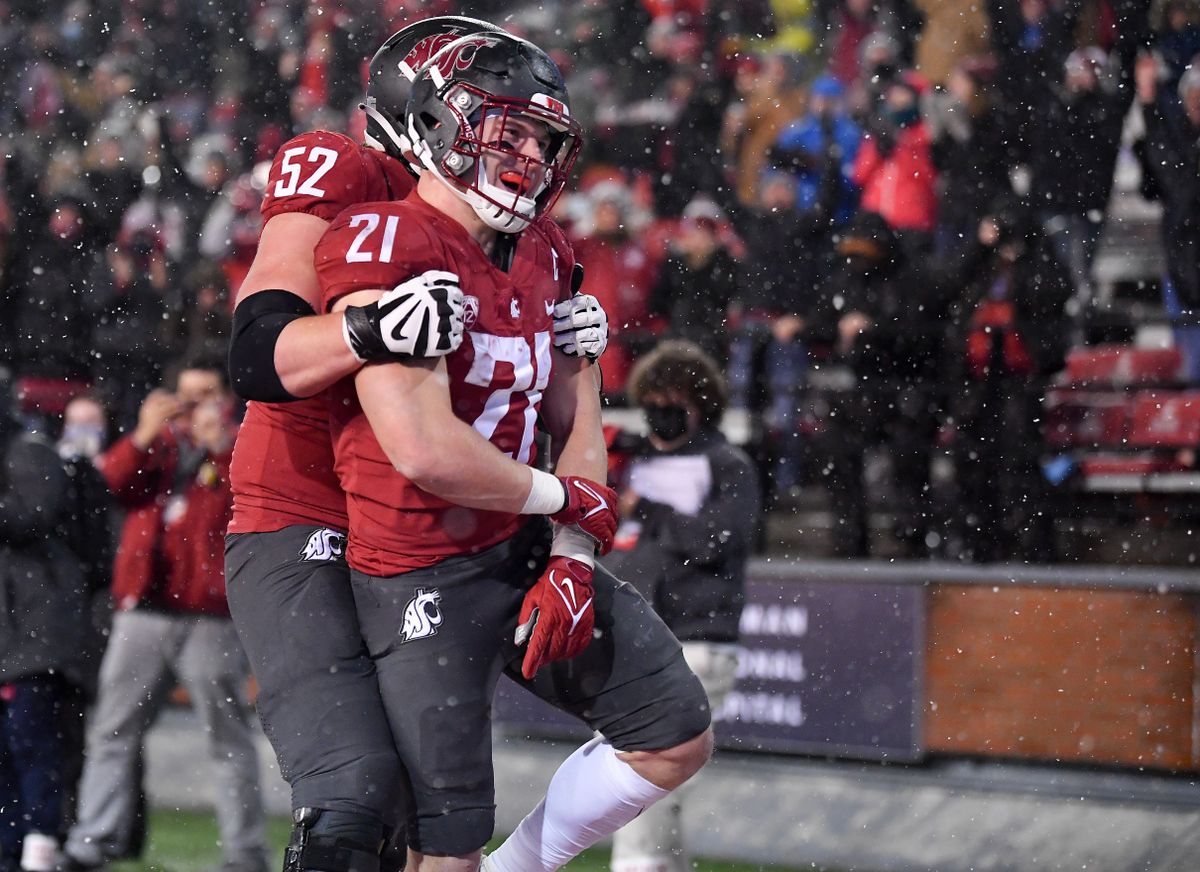 WSU: The current crop of Cougar players haven’t had much success in their previous Apple Cups, none if you only count wins. But Colton Clark delves a little deeper this morning and looks for some highlights. … After all, the WSU players are adamant the past doesn’t matter. Colton has that as well. … He also highlights the keys to victory and has his pick. He takes the Cougars by 10. … UW alum (and former S-R beat writer) Jacob Thorpe thinks Washington State will win this edition of the Apple Cup as well. … So does Jon Wilner. … The women’s basketball team rolled over Miami in the Bahamas last night. … Back to football, this group of Huskies certainly doesn’t want to be remembered as the group that didn’t go to a bowl, had their coach fired in midseason and lost the Apple Cup as well. … Some coaches have been Huskies and Cougars. … Elsewhere in the Pac-12 and college football, Wilner has his weekly stock report in the Mercury News and a preview of the weekend. … The rivalry game formerly known as the Civil War still doesn’t have a moniker. Does it matter? The game certainly does this year. Oregon has to bounce back and Oregon State may still have a shot at the Pac-12 title game. … The least attractive “rivalry” game this weekend? That’s Utah vs. Colorado. There isn’t a lot at stake as the Buffs just try to improve and the Utes prep for their latest shot at a Rose Bowl appearance. … There is no bowl game in Stanford’s future. So an upset tomorrow of fifth-ranked Notre Dame will have to do. … California needs to win its final two games to become bowl eligible. The Bears head to the Rose Bowl on Saturday to face UCLA. … USC faces BYU on Saturday in the Coliseum. It’s a big deal for the Cougars. For the Trojans, it’s another game before a decision is made on their next head coach. … The Territorial Cup looks like a mismatch. But can Arizona stop Arizona State and force another coaching change in Tempe? … In basketball news, Arizona feasted on Michigan in Las Vegas. Will there be a hangover? … USC defeated Saint Joseph’s at the Wooden Legacy event. … Utah has its biggest game tomorrow. 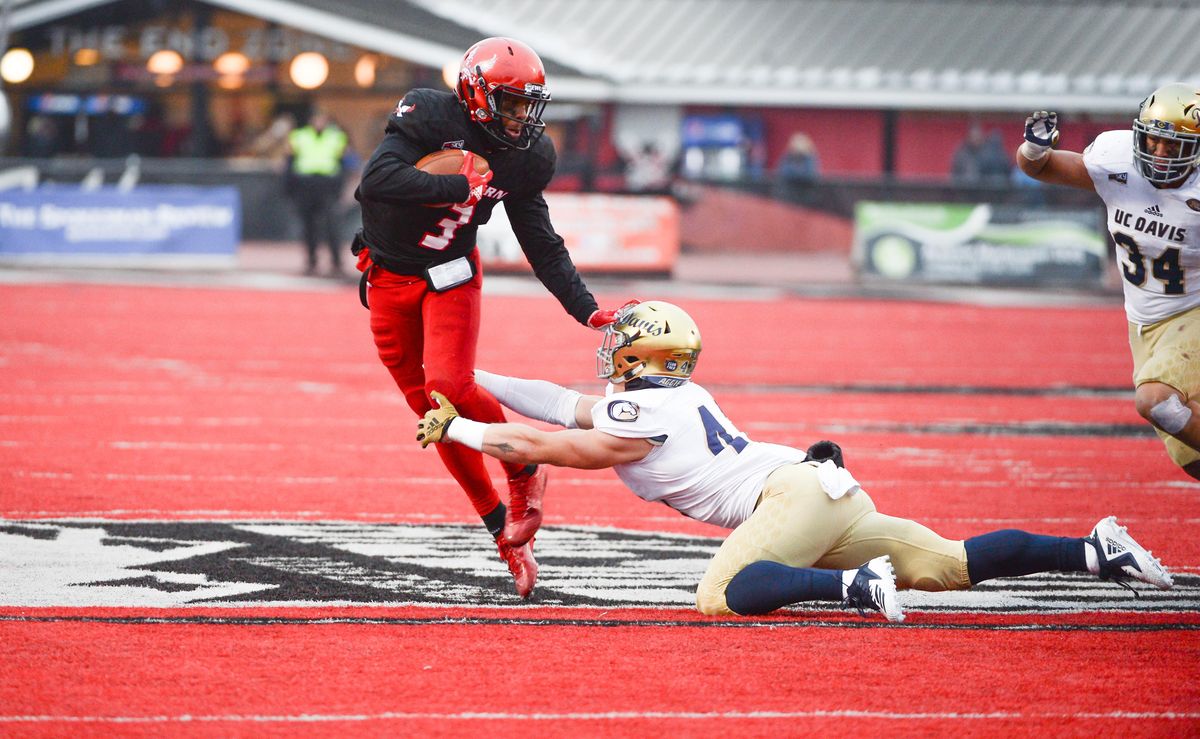 EWU and Idaho: Around the Big Sky, UC Davis will be playing whatever playoff games it has on the road. … One Montana State player stands out among the school’s all-time best. … In basketball news, Montana State is about to become really busy. … Montana didn’t play last night because of the flu among its opponent. Not COVID-19, the flu.

Seahawks: No matter what happens the rest of the way, there will be big changes in Seattle. … Will Carlos Dunlap be back?

Mariners: If you are with me, and felt Scott Servais did the best managerial job of anyone in the American League this year, you will enjoy this Larry Stone column. If you disagree with me, you will probably enjoy it anyway.

• There were no dishes to clean up. No arguments during football. Just a nice meal at a nice restaurant – not everyone ate turkey – and then a quiet, overstuffed ride home with leftovers in tow. Enough, actually, we will have a turkey sandwich for lunch. With all the fixings. It was a near-perfect holiday (and would have been perfect with a few other family members in town). Until later …