All were on display on an unseasonably warm Friday evening as thousands of people packed the edge of Sherman Avenue in downtown Coeur d’Alene for the 29th annual Lighting Ceremony Parade.

“I liked all of it,” said 6-year-old Adrian Slack, who had never been to the parade before.

Adrian’s father, Michael, said the Lake City High School marching band put on a phenomenal performance as they were in sync the entire time.

Lauren Bergendahl, an LCHS junior, made her third appearance as part of the high school marching band at the Coeur d’Alene holiday parade. She played the saxophone Friday.

“This is one of my favorite things to do,” she said. “I love all the participation that the band puts in and I love seeing kind of the whole community come together for the Christmas parade. And I love seeing how festive it is.” 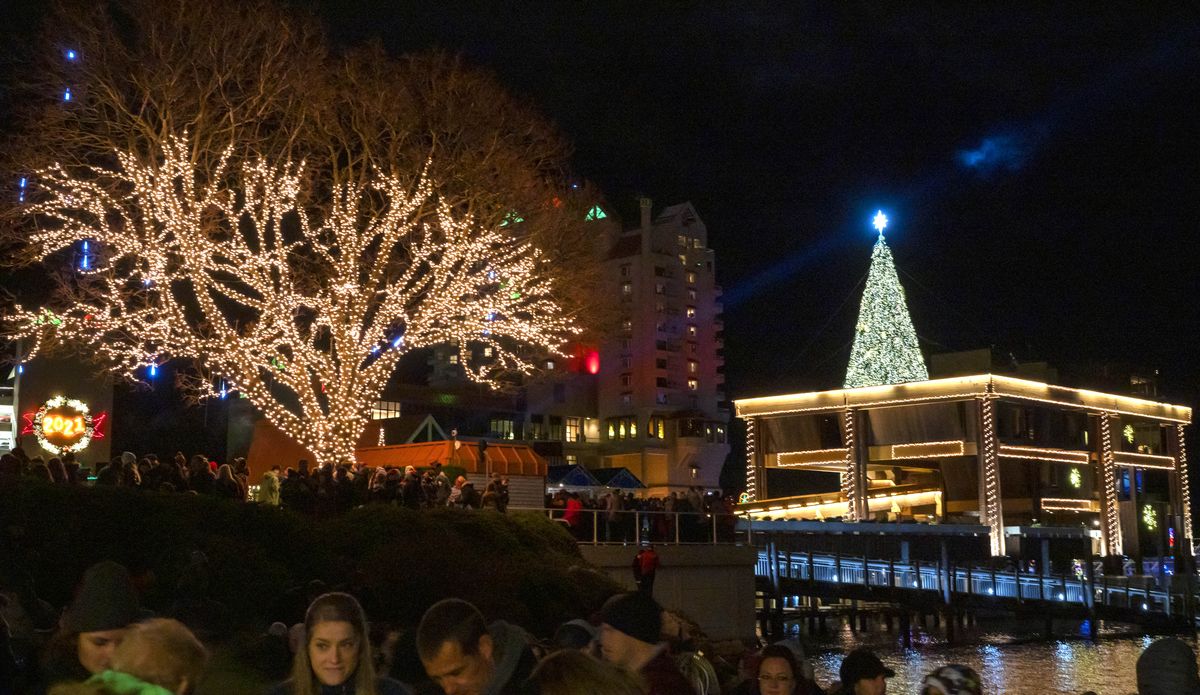 A Hagadone Marine Group boat featured two people dressed as a snowman and reindeer, and it towed an elf riding a skateboard, as well as a man sporting reindeer antlers behind the watercraft.

The Red Hot Mamas, described as a “musical-comedy group of vintage women” on its Facebook page, danced down the street dressed in Christmas presents around their torsos.

Smokey Bear waved to the crowd in the back of an Idaho Department of Lands fire vehicle, Sparky the fire dog gave out high fives to children along the curb and a Coeur d’Alene ladder truck rolled down the street with its red and white lights flashing and horn blaring.

The parade culminated with Santa Claus sitting and waving in the back of a Coeur d’Alene fire vehicle.

The highlight of the night for many children was the Grinch character that paraded down the main drag.

“Seeing the Grinch” was my favorite part, said Peyton Nelson, 7. His brother, Cameron Nelson, 5, agreed, but only because his older brother said it first, according to Valerie Nelson, the boys’ mother.

Valerie Nelson said the family moved to Hayden from Edmonds, Washington, in July, so this was the first time the family took in the annual parade.

“I liked it,” Valerie Nelson said. “I love small, little parades in little towns. It looks quaint. We came from Edmonds so we had kind of a similar thing but not as big. I love all the festivities of Christmas.”

“I loved all the characters,” Timberlynn said.

Following the parade, over 1.5 million lights were turned on to brighten downtown and thunderous fireworks lit up the night sky.

“I just liked all of the colors and lights,” Kennedy Jeffries said.