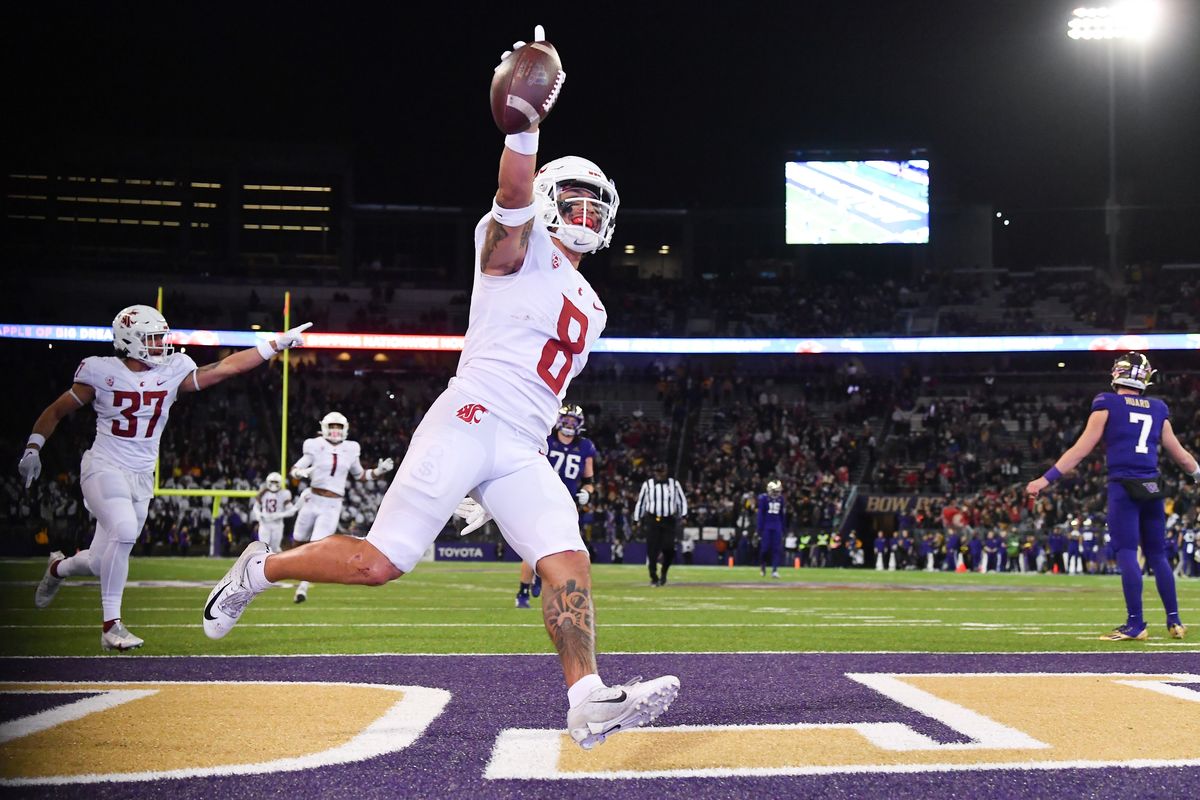 Washington State Cougars defensive back Armani Marsh (8) runs the ball into the endzone for a touchdown after picking off Washington Huskies freshman quarterback Sam Huard (7) as Huard, right, reacts in the direction of the UW bench during the second half of a college football game on Friday, Nov 26, 2021, at Husky Stadium in Seattle, Wash. WSU won the game 40-13 (Tyler Tjomsland/The Spokesman-Review)

The seven game drought is over – the Apple Cup is coming back to the Palouse.

Washington State dominated Washington en route to a 40-13 win in Seattle on Friday.

Meanwhile, UW quarterback Sam Huard was thrust into the rivalry for his first career start, going 17 of 31 for 190 yards and four costly interceptions.

Cougar running back Max Borghi was as electric as ever, taking 22 carries for 129 yards and two touchdowns.

WSU will await the result of tomorrow’s rivalry between Oregon and Oregon State. If the Beavers pull off the upset, the Cougars will be representing the Pac-12 North in the conference championship game.

‘It was a proud moment’: Washington State throttles Washington in drought-snapping victory, parties at Husky Stadium

SEATTLE – An inspired sea of crimson stormed the field at Husky Stadium and covered up the big purple “W.” | Read more

Twenty-four minutes before kickoff of the Apple Cup, freshman Sam Huard was announced as Washington’s starting quarterback, eliciting a roar at Husky Stadium that landed somewhere on the decibel meter between a golf clap and Beastquake. | Read more

Big pick up from de Laura after Borghi was stuffed at the line of scrimmage on back-to-back carries to start the game.

UW defenders were not interested in tackling the Cougar running back, as he spun off a defender around the 10 yard line.

Nothing was stopping @max_borghi from scoring 💪😤@WSUCougarFB strikes first in the Apple Cup! pic.twitter.com/6CJTBmHyYY

UW’s defense holds strong, but the Cougars have their first two-score lead in the first quarter of an Apple Cup since 2003.

The punt goes into the endzone for a touchback after UW had a chance to pin the Cougars inside the five.

This was so close to being a perfect punt for Washington pic.twitter.com/Z6V2kAivmW

The first 15 minutes couldn’t have gone better for WSU, who is dominating so far. The Cougars have out-gained the Huskies 153-2 and controlled the ball for 11:31. No first downs yet for UW.

Huard is 3 of 7 for 17 yards and an interception in his first start.

The @WSUCougarFB defense is giving Washington problems in the first half 🔒 pic.twitter.com/DXiAnT8tAj

6:32 - WSU 13, UW 0: The Huskies come away with another redzone stop and Dean Janikowski converts a 25-yard field goal.

0:00 - WSU 13, UW 7: Dean Janikowski’s 48-yard field goal is no good. Cougars dominated the first half, but go into the locker room with a slight advantage over the Huskies.

Washington State takes a one-score lead into halftime, despite dominating the early proceedings of the 113th Apple Cup.

WSU has outgained UW 255-63 and controlled the ball for 20:36 minutes, but settled for field goals on two redzone possessions and missed a 48-yard field goal as time expired on the half.

The Huskies finally got on the board late in the second quarter after struggling to move the ball for most of the half. UW has gained 17 rush yards on 10 carries.

The Cougars’ 6 penalties for 55 yards – including a revoked 54-yard touchdown run by Max Borghi – have set themselves back.

Still, the WSU offense has been effective. Jayden de Laura is 16 of 17 for 164 yards and Max Borghi has 11 carries for 70 yards and a touchdown.

UW will receive the ball to start the second half.

Jayden de Laura has been excellent in his first Apple Cup. He has completed 21 of 22 passes for 211 yards and added two carries for 19 yards.

Another one for @max_borghi 🔋@WSUCougarFB starts the second half strong pic.twitter.com/IYf4xPfF7v

They continue to put pressure on Washington pic.twitter.com/1HukX3qLR8

UW had a great opportunity after a 55-yard pass to Rome Odunze, but turned it over on the next play.

ANOTHER interception! @WSUCougarFB does it again 🙌 pic.twitter.com/n9vIG5kfs6

14:23 - WSU 30, UW 7: Deon McIntosh punches in a 2-yard touchdown, as the Cougars capitalize on the turnover. McIntosh is penalized for celebrating with Butch – the WSU mascot – but he’ll be forgiven by Cougar fans for that.

Cougars are in striking distance of surpassing their largest Apple Cup win, which was a 26-point margin in 1973.

Score a TD, celebrate with @ButchTCougar 🔥@WSUCougarFB is starting to pull away in the 4th quarter pic.twitter.com/oQR19N42IX

8:23 - WSU 40, UW 13: Sam Huard’s pass bounces off the hands of his target and Armani Marsh is there for an interception that he returns 28 yards for a touchdown.

That’s Huard’s fourth INT of the day, and if the score holds will be WSU’s most lopsided win in Apple Cup history.

PICK SIX@WSUCougarFB earns their FOURTH interception of the game 💪 pic.twitter.com/gSb3QJCQbm

Washington State travels to Seattle to play the 113th Apple Cup against Washington today at 5 p.m. on FS1.

The Cougars (6-5, 5-3 Pac-12) are lead by interim coach Jake Dickert, while the Huskies (4-7, 3-5) have interim Bob Gregory at the helm, after both teams fired their head coaches earlier in the season.

WSU hasn’t won the annual rivalry since 2012, and haven’t won it in Seattle since 2007. Suddenly the stakes are even higher for the Cougars after Oregon lost to Utah last weekend – a WSU win, and an Oregon State win over the Ducks tomorrow would lift the Cougars into the Pac-12 Championship game.

WSU is a one point favorite according to Vegas Insider Consensus.

#WSU QB Jayden de Laura warming up ahead of his first 🍎 Cup. pic.twitter.com/DETDtwzmN3

The Huskies have dominated the series in recent years, winning the last seven meetings and 10 of the last 11. 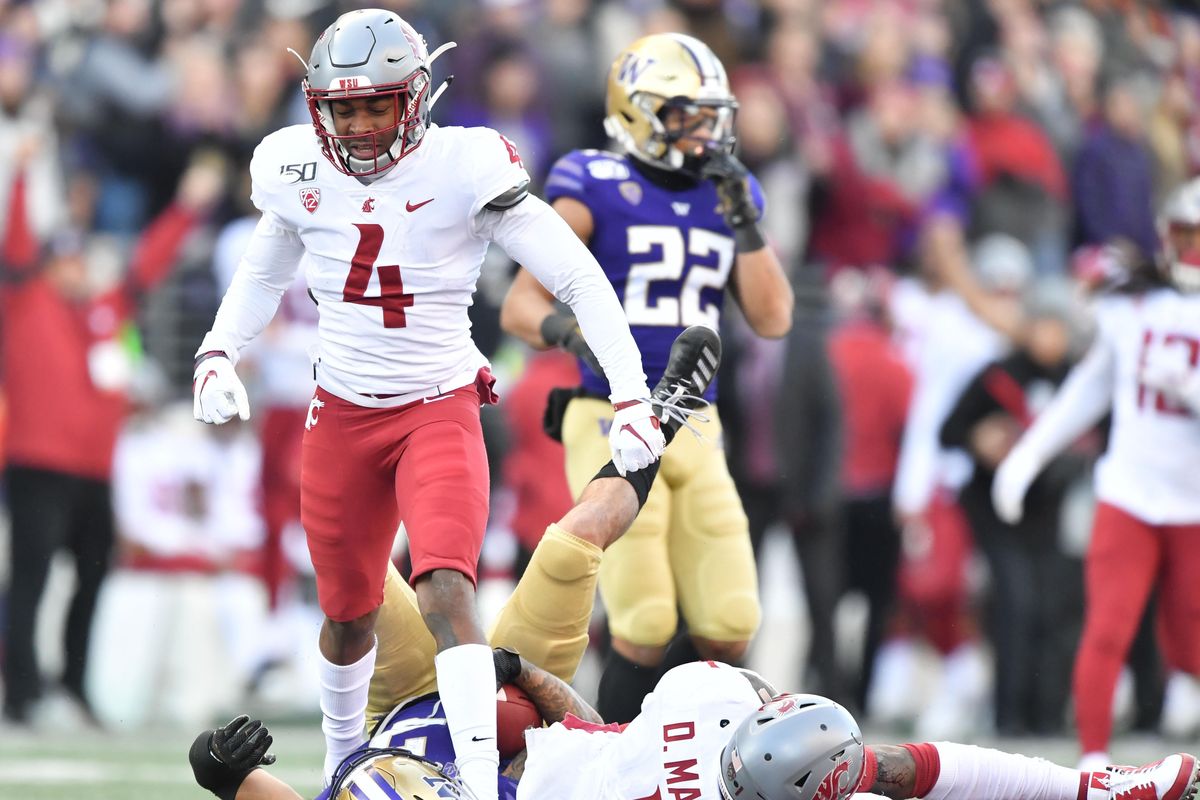 ‘It’s not about what the past record is’: Washington State playing for more than payback in Apple Cup

For Washington State, there is much hinging on the outcome of Friday’s long-awaited Apple Cup. | Read more

Two-minute drill: Keys to victory for Washington State against Washington

The pick: Why Washington State will beat Washington

SEATTLE – Set aside for a moment all the noise surrounding this rivalry game – its mostly one-sided history, its anxious build-up and all the annual smack talk. | Read more

A few presidential administrations ago, back when Washington State’s football operations facility was new, former Director of Athletics Bill Moos did his best impression of an MTV Cribs walk-through (forgive the dated reference but, again, this was 2014). | Read more

‘All of them are focused’: Looking back at the most impactful Apple Cup performers among active Washington State players

SEATTLE – Washington State comes to the West Side with a fresh coaching staff – inexperienced in this rivalry – and a fairly new-look roster compared to the last time the Cougars lined up against Washington for the Apple Cup. | Read more