A GRIP ON SPORTS • Anything happen yesterday? Other than Washington State doing the inevitable, I mean.

• If you told your buddy last night over an adult beverage you thought the Cougars were going to give Jake Dickert the head football job full-time, good for you. You saw it coming.

Then again, everyone saw it coming. 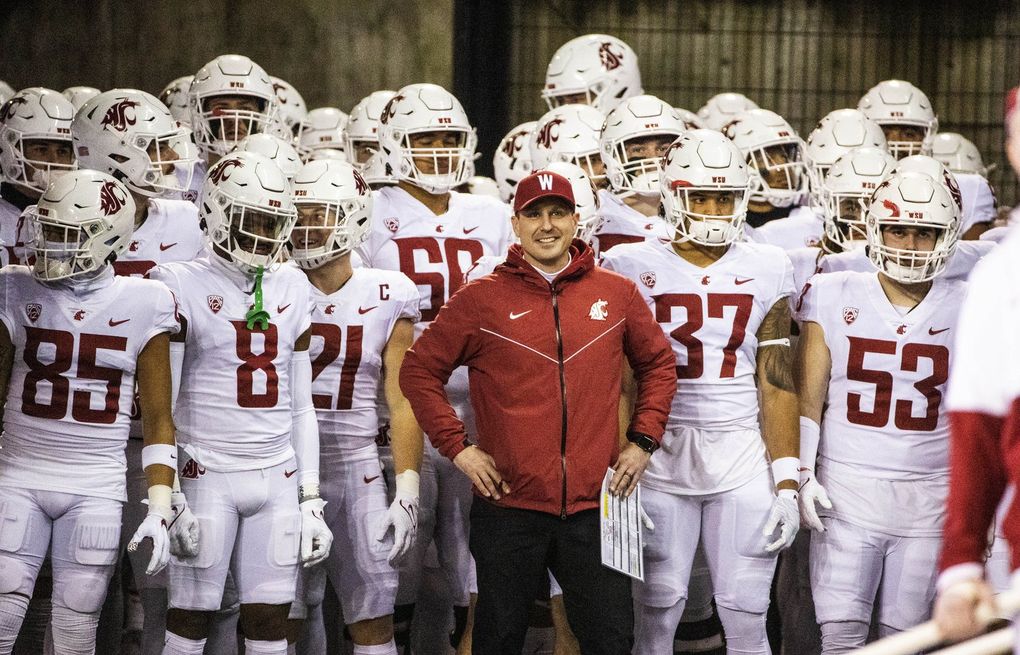 After the past month, especially after the past 48 hours, it was inevitable. Dickert, the 38-year-old defensive coordinator elevated to the top spot when former coach Nick Rolovich was escorted off the campus, had done enough to show he was the right person for the job. At this time.

The Cougars got it. And just by preserving the peace, Dickert won the job.

Well, that and winning a trio of games, including WSU’s first Apple Cup since Democrats and Republicans were still talking with each other.

Yes, that long ago.

Now the Cougar faithful has to exhibit a trait rarely found among such groups. Patience. It may be a while before Washington State reaches the recent heights again.

We’re not talking about the upcoming bowl game. Whomever the Cougars play better be ready for a tight-knit, experienced group playing for each other. That’s a tough nut to crack.

No, we’re talking down the road. And only a little way. This group, despite a handful of breakout younger stars, was led by its upperclassmen. Max Borghi. Jahad Woods. Calvin Jackson Jr. Abe Lucas. Jaylen Watson.

Washington State is losing a lot. The recruiting class, roiled by Rolovich’s inane self-destruction and months of uncertainty, won’t be tremendous help. There could be unexpected transfers out, one or two due to being in sympathy with their former coach and his vaccine stance. A new staff will have to be built. New players brought in through the portal, maybe one or two carrying Dr. Pepper.

No matter what, next August, when camp opens again, the Cougars will be different. Markedly different. And more than likely, not improved.

The preseason should feature two wins (Idaho and Colorado State, both at Martin Stadium). There is one game that will be harder to crack (at Wisconsin). And five home Pac-12 games that won’t be easy: Arizona State, Oregon, California, Utah and the Apple Cup. The road games? Arizona, Oregon State, Stanford and USC.

It may be a tough a first full season for Dickert. How much support will he receive from alumni and boosters, two notoriously mercurial groups, if his team is upset by, say, Colorado State, in late September? It better be a lot. After all, he was their choice. They made it easy on Pat Chun. No nationwide search was needed. By allowing his team something of a normal finish to the season, Dickert earned their support and a wave of goodwill. Its crest, Friday’s romp in Montlake, swept him into the full-time job.

Now he’ll try to ride that momentum into long-term success. The short term? That will be a bit tougher. 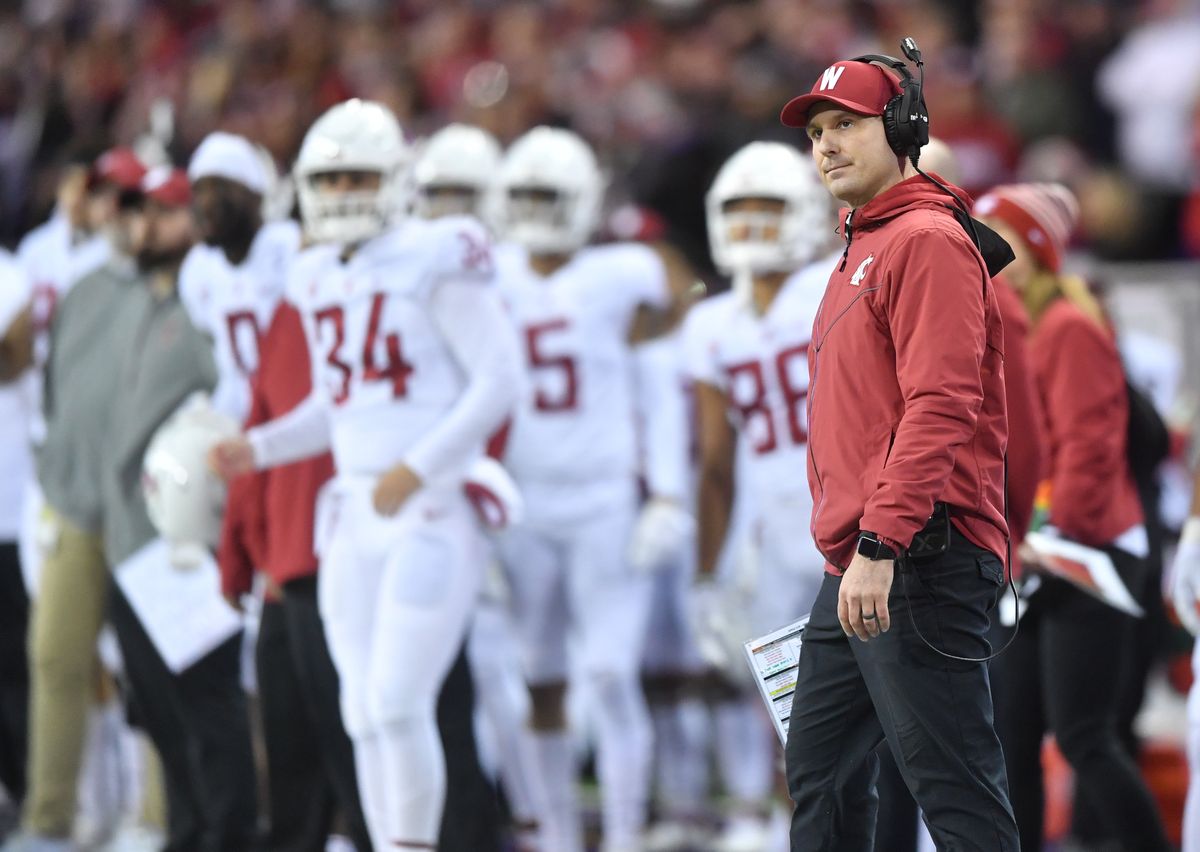 WSU: Of course Dickert’s hiring is the biggest news out of Pullman from Saturday. The news leaked in the early afternoon and forced the Cougars to acknowledge the inevitable before the night was old. Colton Clark has this story on Dickert’s ascension. … Before the news broke, Colton had put together a story on what’s ahead in the bowl season. Oregon State’s loss in Eugene ensured Washington State would be off next weekend. … Everything wasn’t all rainbows and cotton candy yesterday in Pullman. Kyle Smith’s basketball team blew a 19-point first-half lead and lost, at home to Eastern Washington. Yes, the same EWU team that has already lost to UC Davis and Texas State. Taylor Newquist covered that game. … Geoff Crimmins has these photos from the contest. … Elsewhere in the Pac-12 and college football, Jon Wilner has his usual Saturday night column in the Mercury News, covering what went on over the weekend. … Oregon and Utah will have a rematch Friday night in Las Vegas. The Ducks earned their spot by racing out to an early lead against Oregon State and cruising to a win. … There was a fight in the second half of a rivalry game that doesn’t have a name. … Utah has turned a tragic season into something better. … Notre Dame kept its CFP hopes alive by rolling over woeful Stanford 45-14. The Cardinal lost their final seven games. … BYU went 5-0 against the Pac-12 in football, including last night’s hold-on 35-31 win over USC in the Coliseum. There will be no bowl game for the Trojans. … California, which plays USC next Saturday, won’t be bowling either after its 42-14 defeat in the Rose Bowl last night. UCLA seems to be ending the season with momentum, which is important for the Bruins and Chip Kelly. … Arizona State handled Arizona with ease, which surprised absolutely no one. But what happened afterward, now that was something of a shock. Herm Edwards is coming back for another year, NCAA investigation be damned. … The Wildcats made way too many mistakes to spring an upset. … Colorado is hoping the ground work has been laid for a rebound next year. … In basketball news, Washington lost another home game, this one to Winthrop, who lost the other night in Pullman. … Arizona had no trouble with Sacramento State, dominating inside and out in a 105-59 rout. … Maybe part of the reason the Wildcats are doing so well, and Washington isn’t, is one player. … UCLA also got right, traveling to Las Vegas and crushing the Rebels. … BYU handed Utah its first loss, knocking the Utes around in Salt Lake City. … Oregon State lost again. … Pac-12 play begins this week with a couple games for everyone. 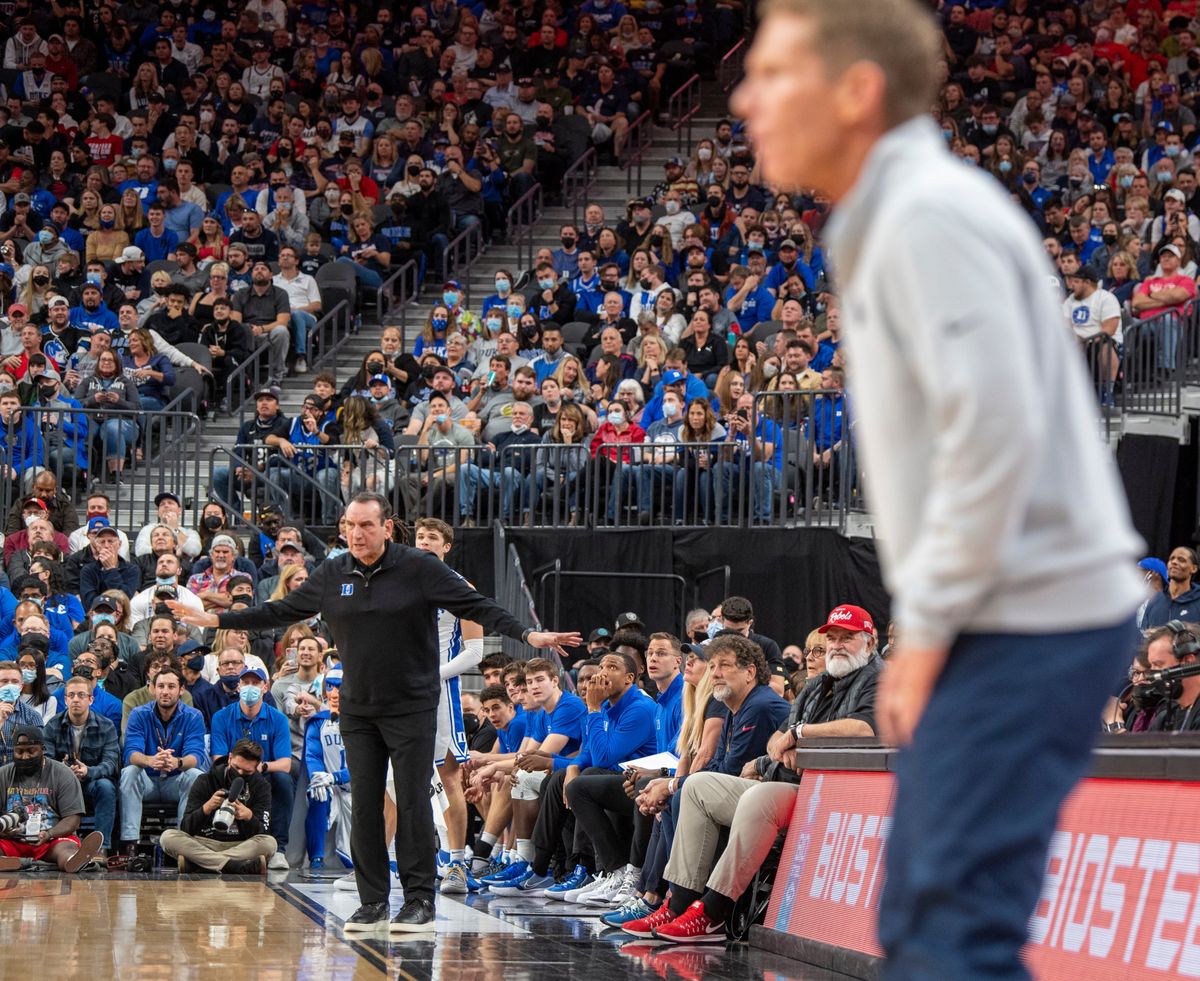 Gonzaga: There is almost always going to be mutual respect among longtime college basketball coaches. So there is little surprise such exists between Mark Few and Mike Krzyzewski. Theo Lawson delves into that and more as he looks back at Friday’s loss to Duke. FYI, the Zags are still No. 1 in Ken Pomeroy’s ranking system. … The women won their second consecutive game in Hawaii, handling Eastern Illinois 74-53. Jim Allen has this story. … Around the WCC, the BYU women are undefeated and upset No. 22 West Virginia 58-57 yesterday to win a tournament title. 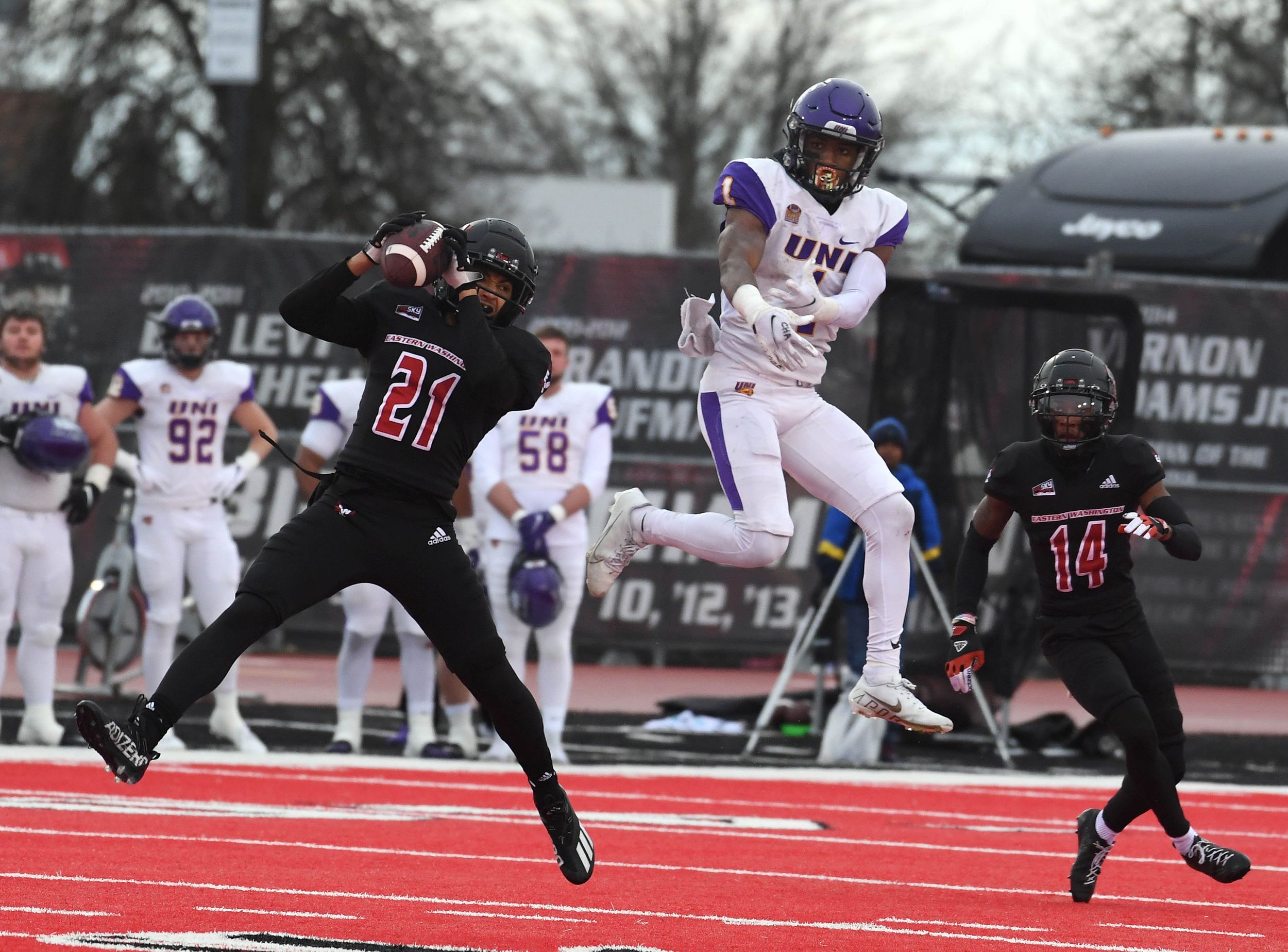 EWU: The Eagles opened the FCS playoffs by struggling a bit on the offensive end against visiting Northern Iowa. No matter. The defense came through in a 19-9, survive-and-advance win. Now they will travel to Missoula for a Friday night showdown. Dan Thompson has the story of their 10th win this season as well as a notebook. … Colin Mulvany was also in Cheney and has a photo gallery from the game. … If you are looking for coverage of the basketball game, it is linked above in the WSU section. It was played in Pullman. … Around the Big Sky, Montana is ready for the rematch with Easterm. … UC Davis was too slow to keep up with host South Dakota State and saw its season end 56-24. … In basketball news, Weber State is 6-0 after an 87-70 win at Dixie State. … Idaho State is on the end of the spectrum following a loss at Air Force.

Preps: Two Northeast 1B powers entered the State football semifinals Saturday in Moses Lake hoping to ensure a rematch in the finals. One team won, the other lost. Dave Nichols was there and has the coverage as Almira/Coulee-Hartline heads to next week’s title matchup with Quilcene, which topped Odessa.

Chiefs: After a long trip home from Kelowna, Spokane had to turn around and play Vancouver. The Chiefs couldn’t muster enough to pick up a win. Kevin Dudley has this coverage of their 3-1 defeat at the Arena. 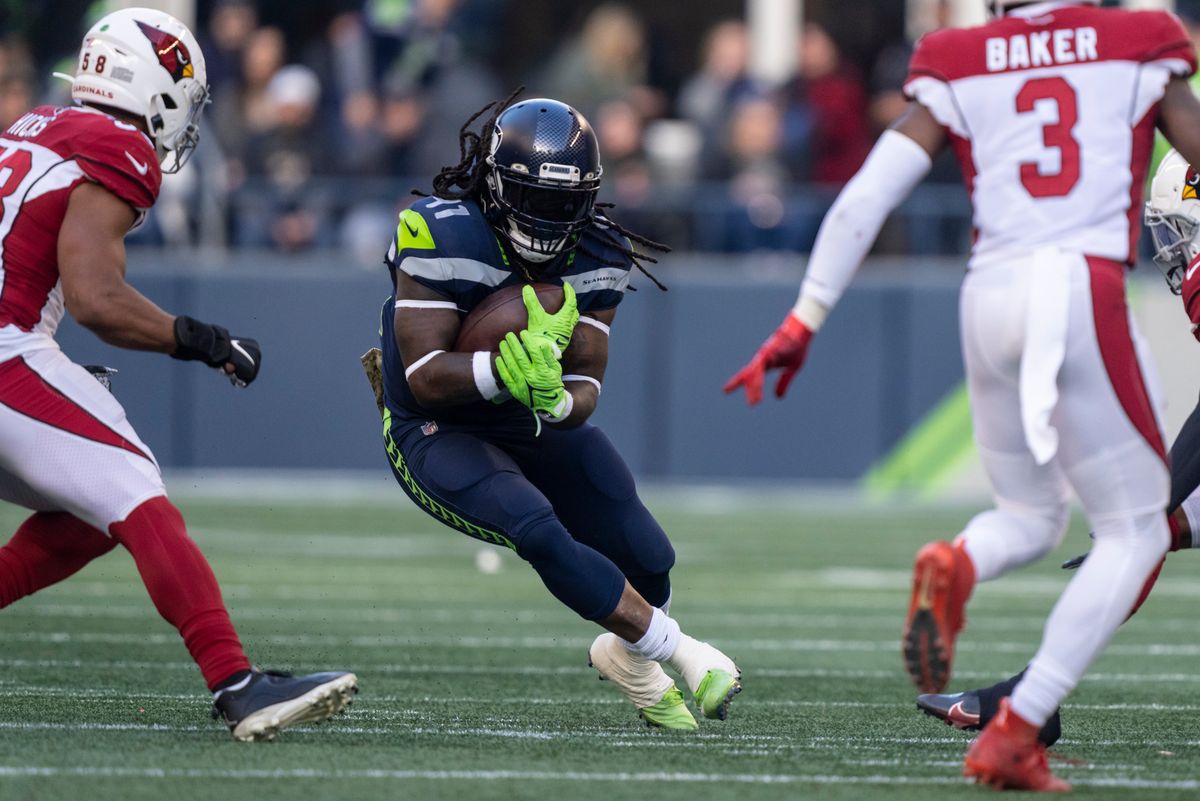 Seahawks: The road beckons. A Monday night game in Washington. Here’s what to watch. … Every running back is banged up and only two are available for the game.

Mariners: The first trade of the winter is an interesting one. The M’s sent a couple of prospects to San Diego for second baseman (and utility man) Adam Frazier. … It might also be the last news for a while, though Jerry Dipoto says he’s been talking with a lot of free agents and possible trade partners. If you read this story, you have to believe there is a long lockout coming.

Kraken: In something of a surprise, considering Florida had won 11 consecutive games at home to open the season, Seattle topped the Panthers 4-1. It’s been a long weekend for Seattle.

• Wouldn’t it be great if Dickert were the perfect choice for Pullman? If he were to stay for the next two or three decades, winning games, taking the Cougars to bowls, putting down Jim Walden-like roots? Yes, it would. But such things rarely happen anymore. Either he’s not successful enough and loses his job after four or five years or he’s really successful and moves up the coaching ladder in the same time period. In between isn’t how things work these days. Until later …