By Nina Culver The Spokesman-Review

For children (age 17 and younger), bring a document from a school, day care center or social service agency verifying each child’s name, date of birth and show their address matches the adult’s address. Birth certificates may only be used to verify date of birth.

COVID protocols: All recipients must wear a mask and provide proof of vaccination or proof of a negative PCR test in the previous 72 hours.

Questions? Email The Spokesman-Review at christmasfund@spokesman.com.

This year’s Christmas Bureau felt a little more real Monday morning when truck after truck of toys arrived at the Spokane County Fair and Expo Center to be unloaded by volunteers ready to sort, inventory and unpack.

Last year’s collaboration between Catholic Charities, the Volunteers of America and The Spokesman-Review had to be virtual, with mailed food and toy vouchers, after the COVID-19 pandemic shut down the in-person event only days before it was set to open.

A full-sized semi backed up to the loading doors Monday as a crowd of volunteers waited with anticipation almost like it was Christmas morning. Someone asked toy buyer Cheryl Taam what was in the truck. “It could be anything,” she said.

Soon pallets of toys were being unloaded as volunteers with clipboards pinpointed where each box needed to go. Among the crowd of volunteers who swooped in to move and unpack each pallet were a dozen Gonzaga Prep students who are part of the Ancilla and Knights service clubs. “We’ve been looking for service opportunities with COVID,” said student Riley Cleveland. 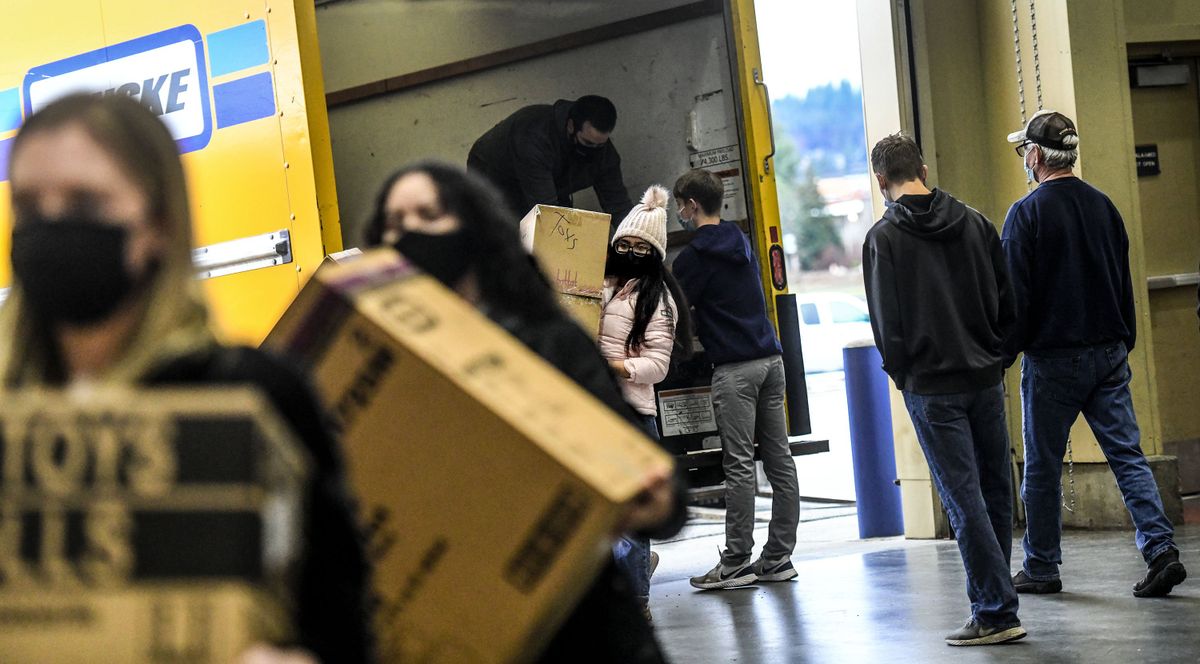 Cleveland said she was surprised at the number of toys in the building, even though there were several more trucks to go. “I’m kind of in shock about how many there are,” she said. “It’s kind of a lot.”

Toys for all ages were being unloaded. The tabletop soccer games were stacked next to the tabletop pool tables. Infant and toddler toys from Fisher Price, Mattel and Little Tykes filled rows near a scientific challenger set and a Bluetooth karaoke disco ball.

Taam said she makes an effort to purchase high-quality toys for the thousands of children whose families need a little help at Christmas. “We buy direct from Fisher Price/Mattel and we buy direct from Lego,” she said. “It allows us to not pay exorbitant prices.”

Taam is already worried about next year and what impact increased shipping costs and delivery slowdowns will have on the toy-buying effort that begins almost as soon as the Christmas Bureau closes its doors. “We know next year, prices have skyrocketed,” she said.

DonationsAdditional donations of $52,449.22 that came in since last year’s Christmas Bureau collection closed bring the year-to-date total to $64,728.10. The fundraising goal this year, as in the past several years, is $535,000.

The Madeleine Muths Memorial Fund at Innovia Foundation donated $22,962.80. According to Innovia, the fund was set up by longtime Spokane resident Raymond Muths, who died in 2015 at 96. He named the fund after his late sister. The fund supports the Christmas Bureau every year along with four other charities.

Jeff and Kay Looney, of Kennewick, donated $10,000, writing “We hope to make Christmas brighter for a few families. Thanks for all you do.” The Duke and Ruth Fette Trust of Davenport, Washington, gave $10,000.

The William A. Crosetto Charitable Foundation at Innovia Foundation donated $859.42.

An anonymous donation of $500 was sent via UBS Financial Services. Nancy Larson sent $500 via PayPal. “Continued blessings for all that you do in the community!” she wrote.

Ronald Deming, of Spokane, gave $250. Todd Jones sent $225 via PayPal. “For my parents, Barry and Carole Jones, and the wonderful contributions they have made for many years,” he wrote.

Brian Donovan sent $100 via PayPal. Nancy Dunn also gave $100 via PayPal, writing “This is from my grandchildren, Lexi and Eli, and me. We are happy the excess money raised will go toward establishing a book fund. What a wonderful benefit that will be for the community.”

Judith Horton, of Coeur d’Alene, gave $25 and two donations of $5 each.