DAVENPORT – A hundred or so people, most wearing orange, sat in a field of dead grass.

The Fort Spokane visitors, many members of the Spokane Tribe of Indians, were clumped in small family groups, scattered due to the COVID-19 pandemic. During Thursday’s ceremony, held to remember and honor the thousands of Native children who died at Indian boarding schools, the gaps in the crowd felt soberly fitting.

Dozens of similar gatherings took place throughout the U.S. and Canada on Thursday. People throughout North America wore orange clothes in solidarity for the children who died away from their families in schools designed to destroy their Native identities.

From the early 1800s up until the 1970s, tens of thousands of Native children attended hundreds of Indian boarding schools. Many were taken away from their families against their will and thousands died of disease.

The schools were established to assimilate Native Americans into white society – “kill the Indian, save the man” was the mantra – and while in some cases they provided the children with an education they wouldn’t have gotten otherwise, they were culturally devastating to tribes. Children were often beaten for speaking their languages or practicing their traditional customs. 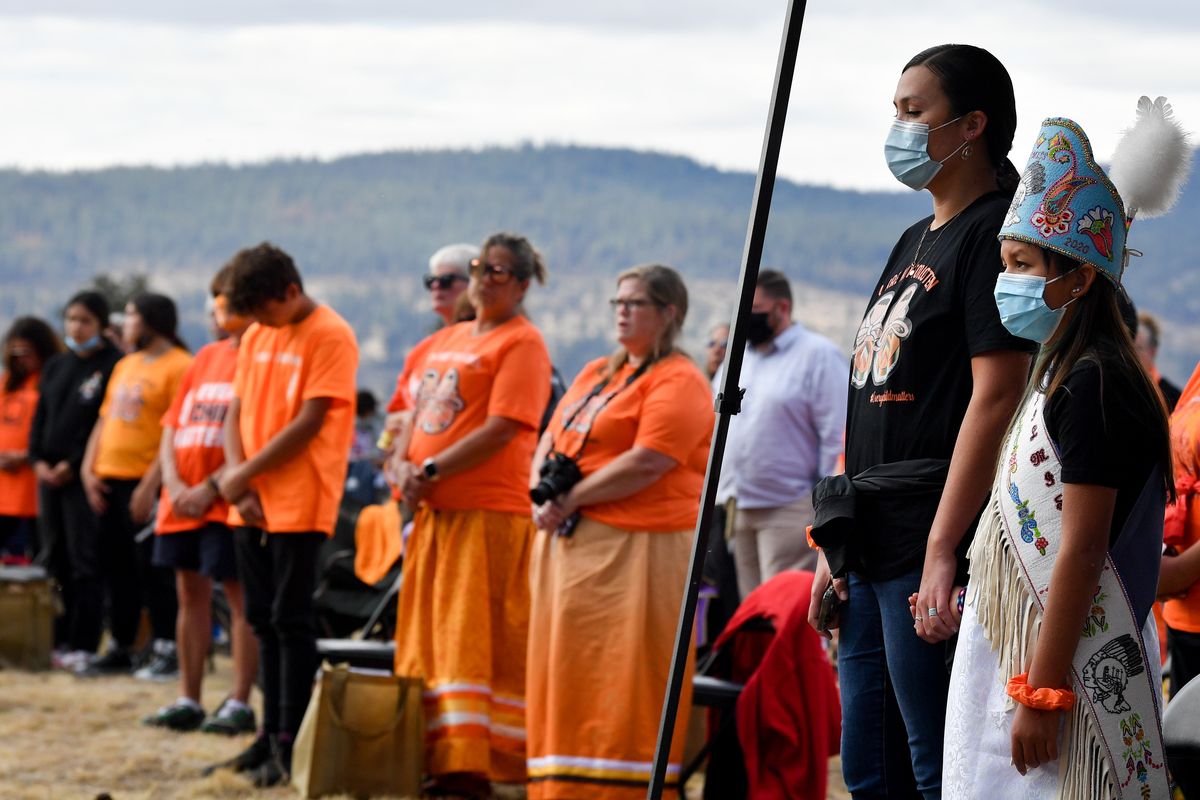 Zoey Brisbois, 7, holds her mother Samantha Brisbois’ hand during an event honoring the lives of those lost in Indian boarding schools on Thursday, Sep 30, 2021, at the Fort Spokane Visitor Center near Davenport, Wash. (Tyler Tjomsland/The Spokesman-Review)

The gathering at Fort Spokane – which served as an Indian boarding school in the early 1900s after soldiers left to fight in the Spanish-American War – came after a handful of macabre discoveries this summer sparked international outrage.

In May, the Tk’emlúps te Secwepemc First Nation announced it had discovered the bodies of 215 children in unmarked graves at a boarding school in Kamloops, British Columbia, found with the help of ground-penetrating radar. Tribes and First Nations have found hundreds of other graves since, at multiple former boarding schools.

Dan Foster, superintendent of the Lake Roosevelt National Recreation Area, was the first speaker during the event. He began by discussing America’s founding.

In 1776, 13 colonies united to overthrow an oppressive regime, Foster said. The Founding Fathers wrote a Declaration of Independence that championed high ideals: all men are created equal, endowed by their creator with certain unalienable rights and entitled to life, liberty and the pursuit of happiness.

But America hasn’t always lived up to those high ideals, Foster said.

“These principles have only been a distant desire,” he said.

Foster said that while Indian boarding schools may have been created with good intentions, today they should be thought of in the same context as the incarceration of Japanese-Americans during World War II, the suppression of women’s rights and slavery.

“It’s important to remember the things that have happened in our country,” Foster said. “We can be better. We can treat others with equity.”

Pat Moses, a Spokane tribal elder, shared a prayer and a hymn in Salish after playing in a drum circle. He emphasized during his speech that the boarding schools threatened to destroy Native cultures and traditions, even if they might have helped some children prepare for life in the modern world.

“Luckily some of our grandmothers and grandfathers managed to escape the boarding schools,” Moses said.

Warren Seyler, a Spokane tribal member and an expert on tribal history, said young Natives today are hungry to learn about their cultures. That’s an exciting change, Seyler said, noting that when he was growing up in the 1960s and 1970s, attending public schools, he never learned any tribal history.

Pacific Northwest tribes have been battling to retain their identities for centuries, Seyler said.

“They’ve been trying to change us since 1810, since the first fur trader arrived,” he said.

Seyler told the crowd about some of the Spokane tribe’s history with the Fort Spokane boarding school. For instance, parents were often threatened with jail if they didn’t allow their children to attend, he said.

Speaking Salish at the Fort Spokane school would get a child whipped, Seyler said. Kids who ran away and were caught would be locked in cramped cells built to hold soldiers – Thursday’s ceremony took place in front of the small, brick building that still houses those cells . The building is now a museum that documents both the boarding school and military history.

Matilda Sampson, a member of the Adams Lake Band who now lives in Spokane but attended the Kamloops boarding school when she was a child, talked about her experience at the now famous institution. She doesn’t remember much of it.

“I firmly believe I just blocked it out,” she said. “I had to be someone that I’m not.”

He said he’s angry because Americans and Canadians shouldn’t be grappling with the horror of boarding schools now, in 2021. People should have confronted this awful history long, long ago, he said. The boarding schools shouldn’t have been forgotten.

BrownEagle said young people need to do everything they can to ensure the survival of languages and customs boarding schools tried to snuff out.

Monica Tonasket, a Spokane tribal member, was one of the last speakers. She shared her thoughts a few minutes before the ceremony ended with a traditional song and dance.

Tonasket acknowledged the pain all Natives are feeling right now in the wake of the grave discoveries.

But just because Natives still bear some scars from their ancestors’ experiences at the boarding schools, doesn’t mean they have to carry that burden forever.

“We won’t forget anything that’s happened, but we can move on,” Tonasket said. “We’re still here. We have survived.”