Ranger, an 8-month-old Golden Retriever, eagerly wagged a prescription of cuddles Tuesday for a steady stream of nurses and other health care workers on short breaks in the lawn outside MultiCare Deaconess Hospital.

Another canine caretaker, Olive, leaned into each snuggle. The mellow 3-year-old standard poodle dispensed her TLC in the sunshine alongside Ranger.

It was a welcome break for Kimberly Davisson, ICU charge nurse, who spent a few minutes midday stroking Ranger’s soft fur. She planned to send over co-workers taking breaks during the two hours the dogs were visiting. Along with a year and a half of COVID-19 care, it’s been a tough week, she said.

“I was told there’s puppies here, so I showed up,” Davisson said. “We’re under a lot of stress; it’s hard. Last Friday, I had nine admits in a day and that’s really difficult for an ICU to turn over in one day, so it’s nice we can have these times to come out and get away from it for a few minutes.” 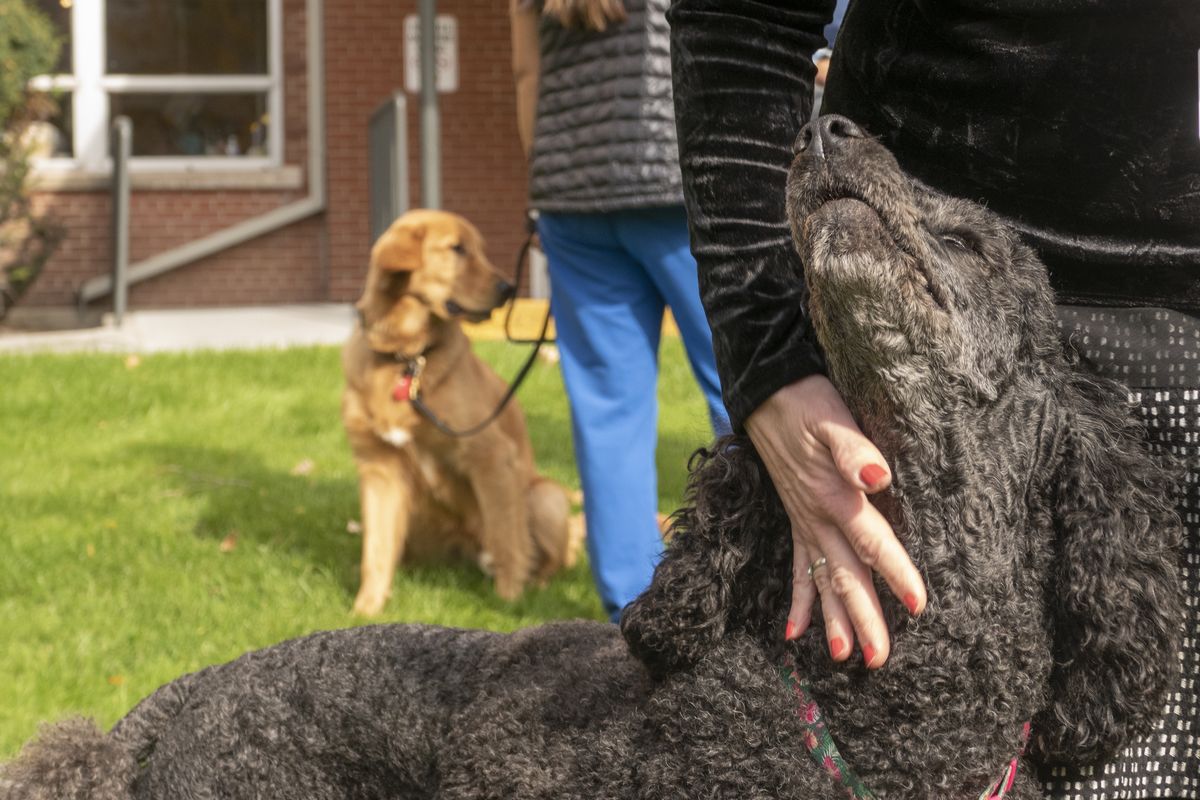 Olive, a three-year-old standard poodle being trained to work as a therapy dog at MultiCare Deaconess hospital, is petted by Donna Speron, right, while Ranger, a golden retriever, waits for more visitors on the lawn outside Deaconess Hospital Tuesday, October 5, 2021 in Spokane, Washington. Olive, Ranger and other dogs that will be used for therapy with hospital patients, must pass a rigorous test to be certified before working inside the hospital. (Jesse Tinsley/The Spokesman-Review)

“It’s nice being outside and getting some dog love. Just petting them gives them a sense that they’re loved, and I think they understand that when you’re showing them attention, that they’re relieving your stress. Dogs are sensitive to that.”

The dogs were on standby courtesy of Bailee Walters, nurse manager for Deaconess’ ICU, who recently thought of the pet therapy for staff after hearing a co-worker wish for “a bag of puppies” to bring smiles and relieve stress as hospital employees work against the delta strain of COVID-19 and staffing shortages. ICUs have been hit hard as they care for patients, including more younger people, who have worsened or died as the delta variant surges.

On Tuesday, Walters brought Ranger, her family dog. While trained in pet therapy work, he can’t officially be certified until he’s a year old, but has passed a mock test and was eager to please during the session. Ranger also does daily obedience work with Walters’ husband, Robert Walters, a former Yakima Police Department canine handler who now works in tech for MultiCare.

Olive was there with her owner, Crystal Pointek, Deaconess medical-surgical manager, who offered her dog after hearing about Bailee Walters’ idea.

Walters admitted the session was a bit of a U-turn from pet therapy traditionally offered to patients, but welcomed among weary hospital workers who came by with only word-of-mouth invites. She plans to offer similar dog therapy sessions with Ranger at least once a week for Deaconess employees.

“This last year and a half has been really hard; it’s been really hard on ICU staff,” Walters said. “I think we pride ourselves on the ability to heal and get people home and this year, unfortunately, that’s just not been the case. We’ve had quite a few people pass away. When you go home, what you hear about is COVID, and when you come to work you’re surrounded by COVID. I think that emotionally takes a toll on people, so my heart breaks for health care workers in general.

“It kind of started out, what could I do for my team, and then I realized it was really, what can I do for all the employees here? We rely on ancillary staff all the time, so how can I help health care in this state we’re in right now where people are exhausted, and they come to work every day to help other people? They go home and get a little bit of sleep, try not to think about their day, and come back to do it all over again. So I started doing a lot of research on pet therapy.”

When people get to spend time with pets, research shows it releases endorphins, lowers blood pressure and has other health benefits, Walters said.

Davisson said the dogs do offer a welcomed step away from a fast pace stretched across 12-hour shifts.

“If it’s not a patient deteriorating, it’s somebody waiting to come up from the ER or somebody is waiting to come from an outside facility. There is always something happening in ICU, so to be able to step away from the alarms, constant dinging and constant needs that our patients have, it’s nice to step outside and take a few minutes. Twelve hours is a long time. Some of our nurses have one-on-one because their patient is so sick. This is a nice break.”

Dunja Mayer-Giroux, a nurse educator, ran out later with two co-workers. Ranger got their attention first. “Oh, you’re so soft,” Mayer-Giroux said, while petting Ranger. “It’s a nice distraction to think about nothing but petting this sweet dog.”

Juliet Storm, also in nursing education services, moved over to hug Olive as the poodle stayed cupped in her arms. “They’re so sweet,” Storm said.

Two hospital workers in labor and delivery, Julie Miller and Diane LaBelle walked out looking tired, but that seemed to evaporate when they greeted the dogs. “This is my third day, so this is a nice thing for them to do,” Miller said. Added LaBelle, “You come to work in the dark and you leave in the dark.”

They were both near Herbie Aganda, an ICU and rapid response nurse, who is friends with the Walters but also stepped out to see the dogs.

He laughed as the two dogs tried to play together.

“I think it’s great, especially being out in the sunshine and seeing the dogs. They’re soft. Unfortunately, this is affecting everybody, not just ICU.”