A GRIP ON SPORTS • It’s been an interesting weekend. Too bad it had to end a day early.

• That’s what happens when the regional NFL team plays on a Thursday night (or has a bye). Sunday just isn’t the same. Then again, without the Seahawks taking over the airwaves today, we could spend seven consecutive hours in front of the TV watching RedZone. Yes, that is something to aspire to attain. No, it’s not going to happen. Not today. There are baseball games on. Playoff baseball games. And the weather is turning rotten. Something has to be down with the yard. Guess the best thing to do is thank the Seahawks for not playing and buckle down to finish all we need to get done. 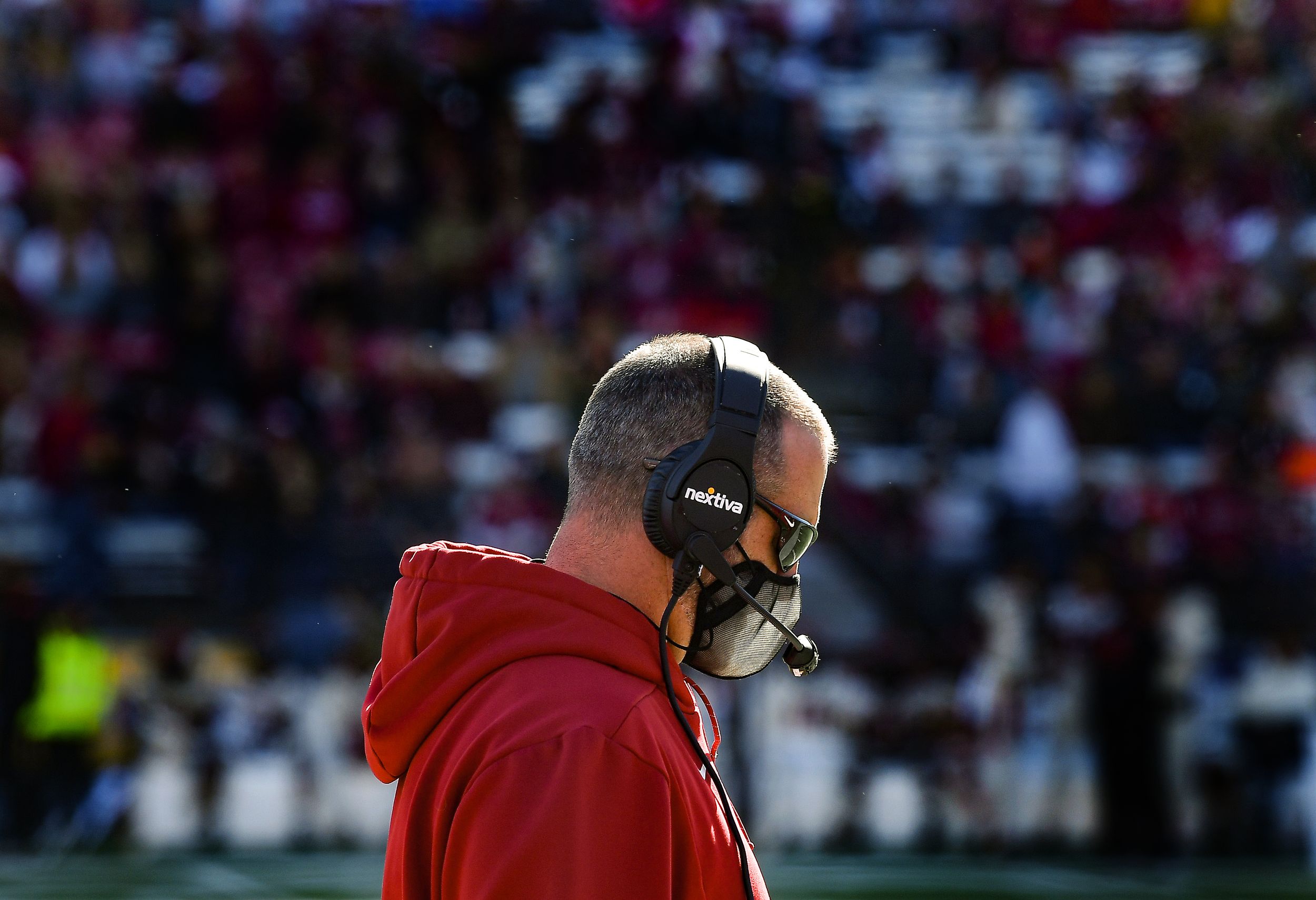 • Which is exactly what the Washington State Cougars did yesterday. They buckled down in the second half and finished off Oregon State, 31-24. Not that the game didn’t have its drama. Far from it.

Before kickoff, there was a soap opera nature to the day, what with USA Today reporting Nick Rolovich was citing a religious exemption in his bid to avoid being vaccinated. The newspaper talked with Rolovich’s mentor, June Jones, who explained Rolovich’s reasons, if not his reasoning. That kicked off a firestorm of social media “discussion,” which seems suspiciously like Coug-on-Coug crime.

Then the Cougars took Gesa Field and outplayed what looked like a better team.

Yes, Oregon State appeared to be better in all facets early on Saturday. The Beavers were bigger, stronger and more efficient. Until they weren’t.

Part of it was Rolovich and his staff adjusted offensively, spreading the field and scrapping their preferred one-back set except in the red zone. Part of it was Oregon State self-destructed, giving WSU field position with an ill-timed – and doomed – fake punt, then getting away from what it does best, running the ball. And part of it was the Cougars showed a mental toughness that had appeared only sporadically the past couple years. 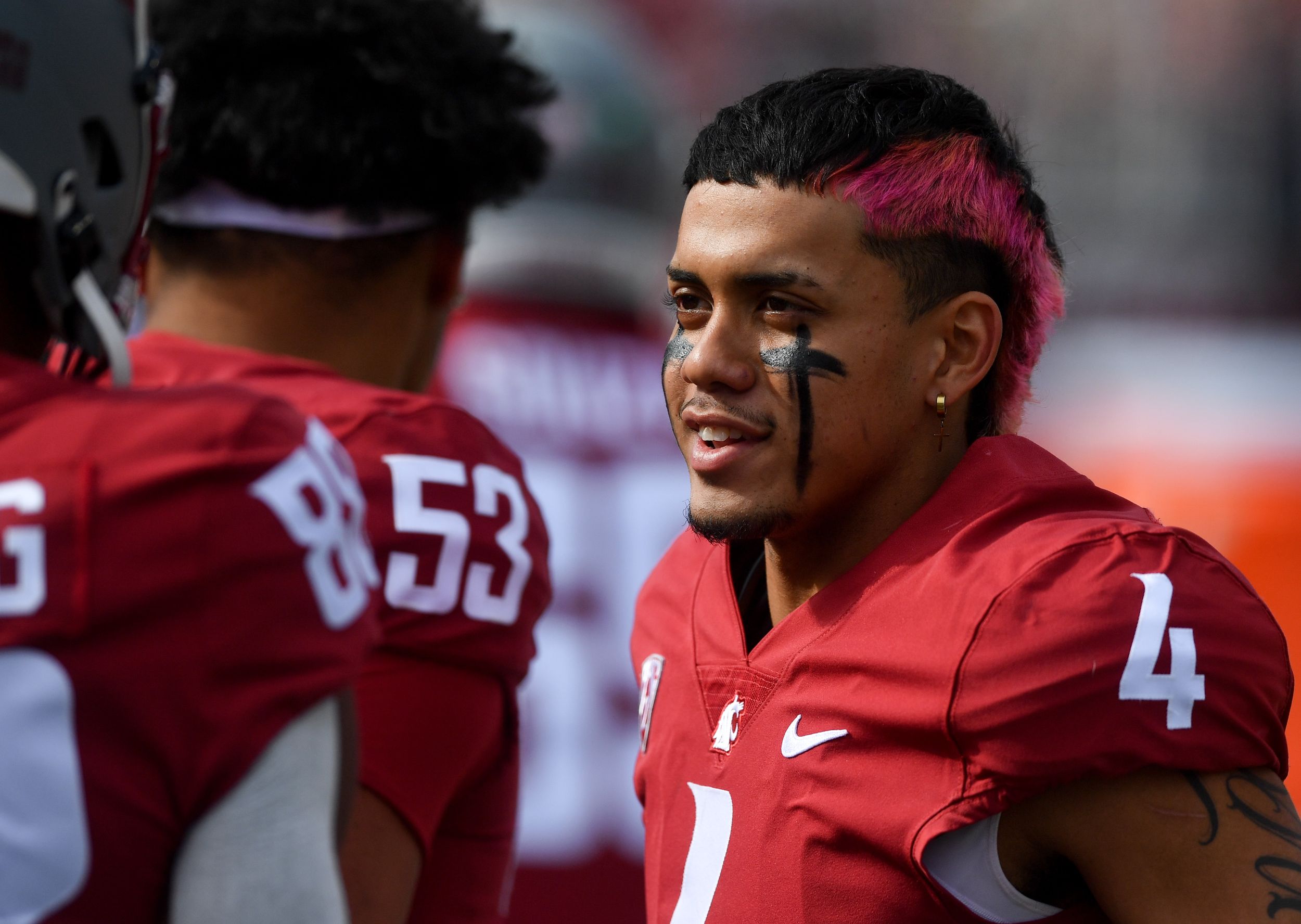 Maybe an us-versus-them mentality actually does work. That seemed to be at least part of the postgame message, imparted by the leader of the offense, second-year freshman quarterback Jayden de Laura.

“I’ve been waiting to speak on this for a while now,” de Laura told the assembled media. “We have no issue with Coach Rolo or with any of our coaches – we respect their decisions. The guys covering us, they’re trying to dig a hole on our Cougar football team. I thought you guys were supposed to be supporting us and you guys are over here trying to take out our head guy.”

There are so many things wrong with that statement it’s hard to know where to start. So we’ll start with what is right and that is de Laura standing up for Rolovich and his assistants. That’s a good thing, even if the hill those coaches are fighting for is one that should have been surrendered weeks ago.

But the people de Laura was talking with aren’t there to support his team. That’s not their role. Never has been. Never will be. They are there to truthfully relate to others what is happening. If that truth seems supportive, fine. If not, fine too. Someone needs to explain this to de Laura – or he needs to listen the next time he hears it.

As for the digging a hole on the team, that’s not what’s happening either. At least not the way de Laura sees it. The only one with a shovel is Rolovich. He’s dug in. Piled dirt high around himself. And it threatens to bury him soon.

It is already threatening to bury the redemption story that is Cougar football, 2021. The story of a defense that, while undersized, flies around and uses max effort to overcome its limitations. Of an offense that seems to be finding itself as the season wears on.

A .500 record isn’t a lot to brag about unless you examine, truthfully, the alternative. With all the noise around the program, noise supplied by a coach who seems to have tuned out reality, the Cougars could easily have folded.

That they haven’t speaks to the leadership of players like Abe Lucas, who spoke eloquently last week. Or Brennan Jackson, whose effort on defense speaks so eloquently for their character. Or the entire team, really, who endured two late first-half scoreless red zone trips that would have deflated it a month ago but didn’t seem more than a speed bump Saturday.

If there is one message this group of Cougars should take from yesterday, it’s this: Don’t worry about what happens with Rolovich over the next couple weeks. You can’t control it. He made his decision. Took his stand. Now it’s up to you. If you model the same behavior that showed up against Oregon State, you’ll be fine. 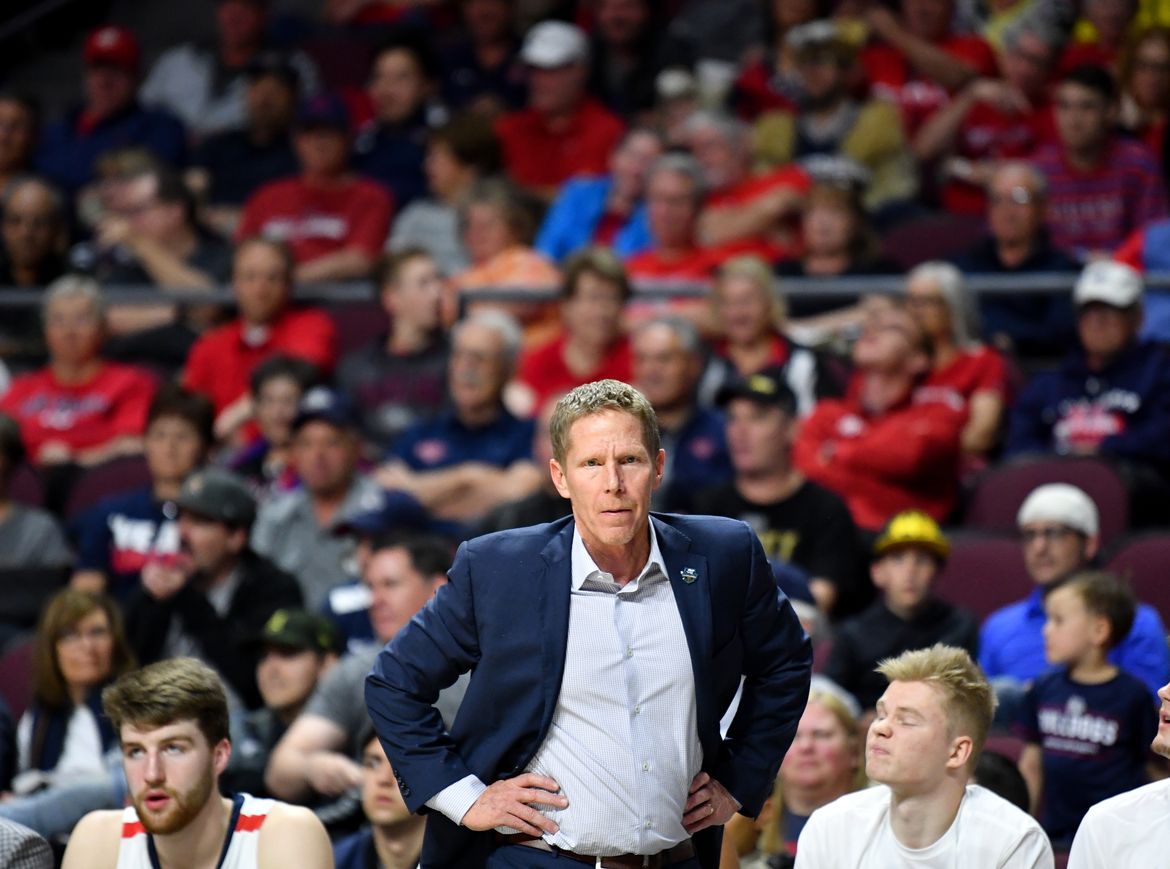 • There was news about another high-profile local coach as well Saturday. Early in the morning Mark Few announced he would not be attending the Kraziness in the Kennel event later that day, missing Gonzaga’s kickoff event for the first time. And that’s not all. Few also relayed he would not coach the Zags in their two exhibition games or their regular-season opener.

It was his punishment for a DUI citation received last month in North Idaho.

Few’s morning pronouncement was followed by a statement from new athletic director Chris Standiford, the order of the two revealing quite a bit about the program, even if it was unintended.

After Few’s citation, it was obvious he would end up being suspended. But with a top-five showdown with Texas looming Nov. 13 at the McCarthey Athletic Center in the regular season’s second game, speculation centered quickly on how many games Few might miss.

Turns out it is one. The regular season opener against overmatched Dixie State. And two exhibition games, double the number Gonzaga has played in recent years. (The Zags have usually used the second available date for a closed scrimmage, the go-to for most high-end programs.) The second was scheduled after Few’s citation.

“I have had a month to reflect on the regretful decisions I made on Sept. 6,” Few said in the school’s release. “I again offer my sincere apology and I remain committed to learning from this mistake. As a consequence of my error in judgment, I will not be present at Kraziness in the Kennel and the first three games of our season.

“I know this impacts our student-athletes and the coaching staff as we begin the season. I understand the severity of my actions and am sorry for the impact this consequence has on our team. Thank you again to those who have supported me, my family, and our program throughout this process.” 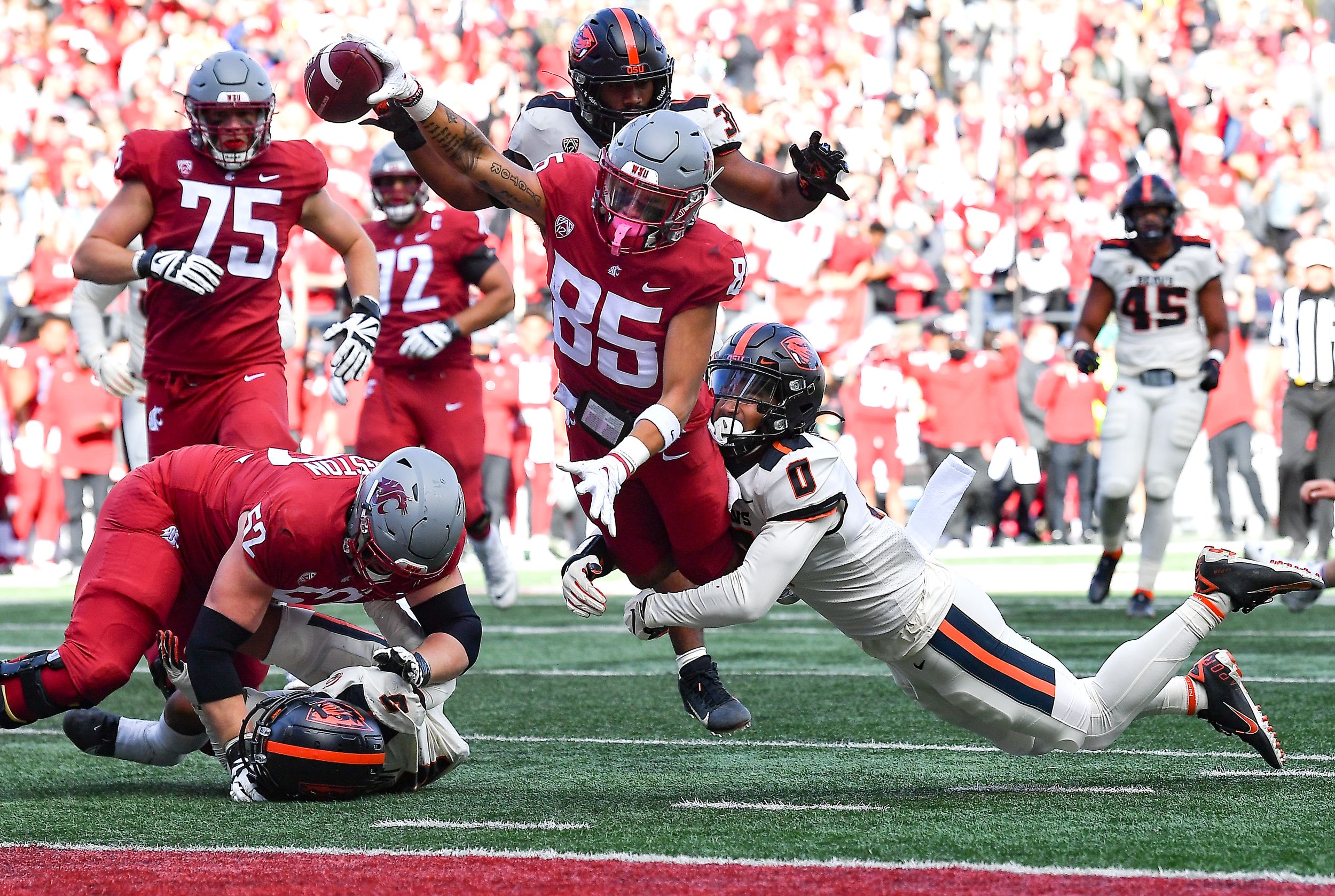 WSU: Nothing says it’s a football Saturday than the coverage of the Cougar game in the S-R. Colton Clark has the game story, a story on Rolovich confirming he’s asked for a religious exemption and his difference makers. … John Blanchette has his column centered round the Rolovich news. … Tyler Tjomsland has an in-depth photo gallery. … The guys in the office put together the recap with highlights. … Finally, I had my TV Take. It was actually enjoyable to watch a broadcast on the Pac-12 Network. … Oregon State got away from what it had been doing well, especially at crunch time. That was a bit mystifying. … Elsewhere in the Pac-12 and college football, it was a quiet Saturday, what with byes and a Friday night game. Still, Jon Wilner has his column in the Mercury News. … What a year for USC. One for the record books, actually. It had been since 1960 that the Trojans had lost at home to Oregon State. And 105 years since they had done the same with Utah. This one wasn’t even close as the Utes rolled, 42-26. … It has been a tough couple weeks for Utah. … UCLA started slowly but got its running game going in the second half and ran over Arizona 34-16. The Wildcats have lost 17 consecutive games. … Arizona State is still feeling good after its Friday win over Stanford. … Colorado had one of the byes but will it help? … In basketball news, there is a different feeling in Tucson. 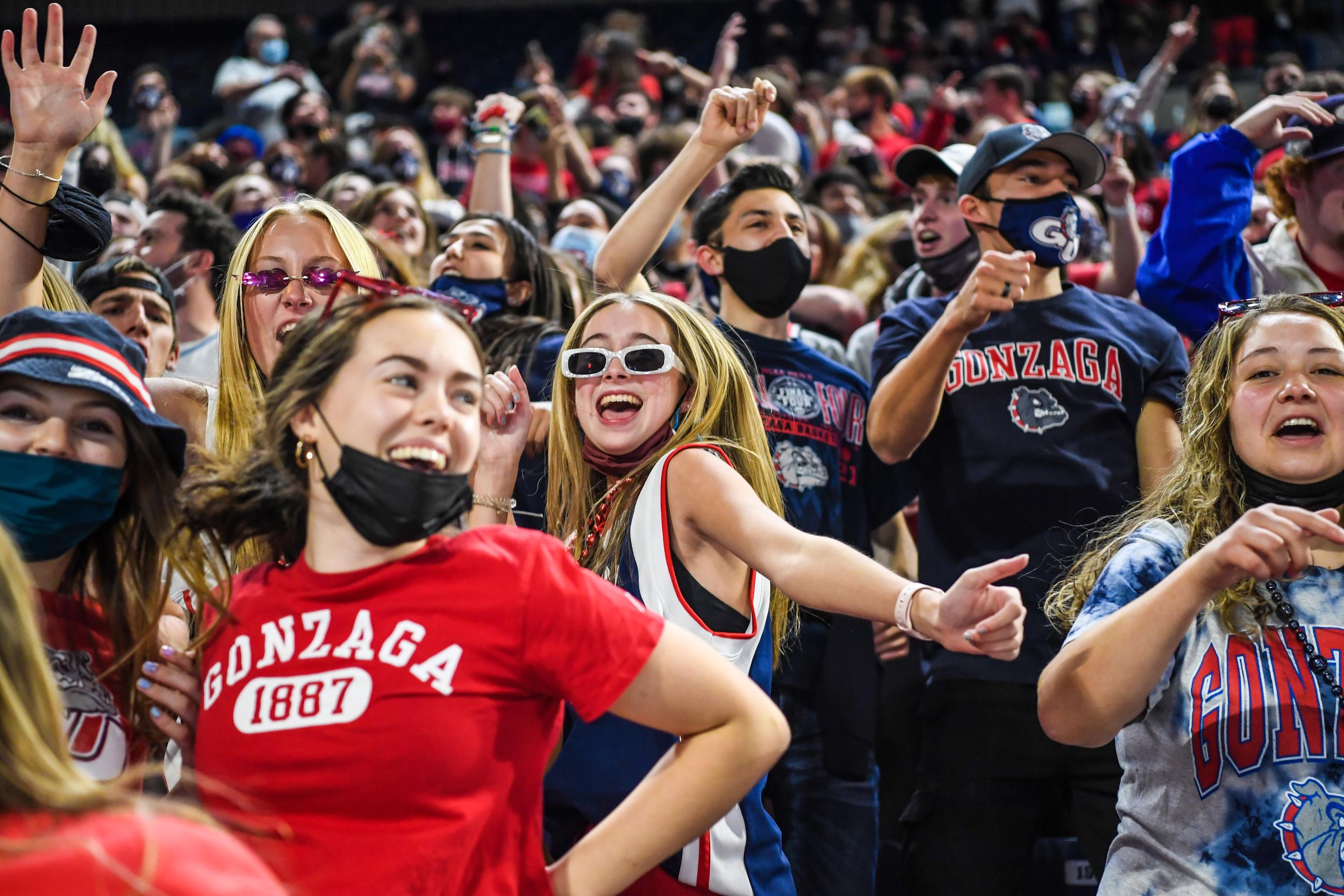 Gonzaga: McCarthey was packed yesterday for Kraziness in the Kennel. Our Jim Meehan has a couple stories, one on Drew Timme letting everyone know he feels this is GU’s year to win a national title and the other on Few’s announcement. … Theo Lawson talked with five-star recruit Anthony Black, who was in attendance, covered the news Dominick Harris is out indefinitely with a right-foot injury and had the players’ reaction to Few’s suspension. … Dan Pelle caught the mood in the Kennel with this photo gallery. 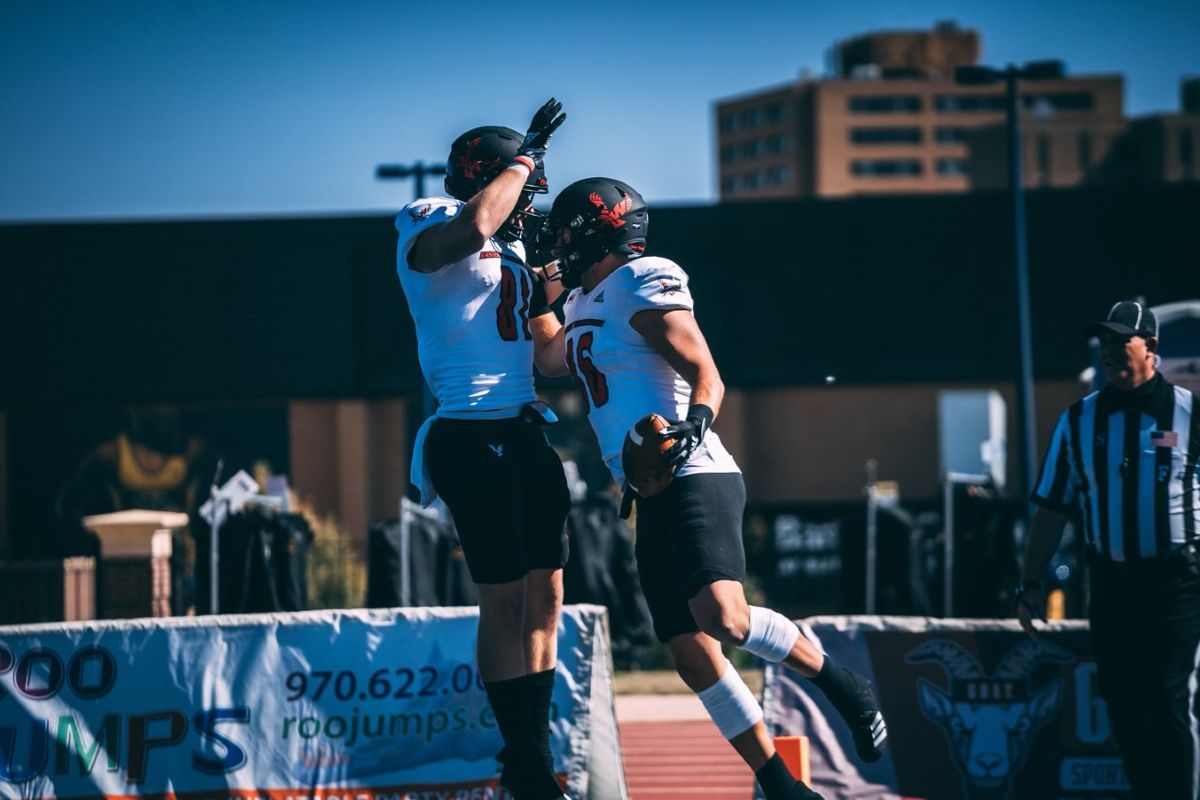 EWU: Northern Colorado had been playing pretty good defense this season. But the Bears hadn’t faced a team like Eastern Washington before. The Eagles rolled up 479 yards of total offense and rolled to a 63-17 victory. Justin Reed has the story. … The Bears didn’t do much of anything well despite being at home. … Around the Big Sky, there was a big upset, with winless Idaho State getting past previously undefeated UC Davis in Pocatello. … Montana had a bit of an Eastern hangover in the first half against Dixie State. … Things are not going well for Cal Poly. Montana State handed it another lopsided loss.

Idaho: The Vandals built a four-touchdown lead and held off Portland State 42-35 before a Homecoming crowd at the Kibbie Dome. Peter Harriman was there and has this story. 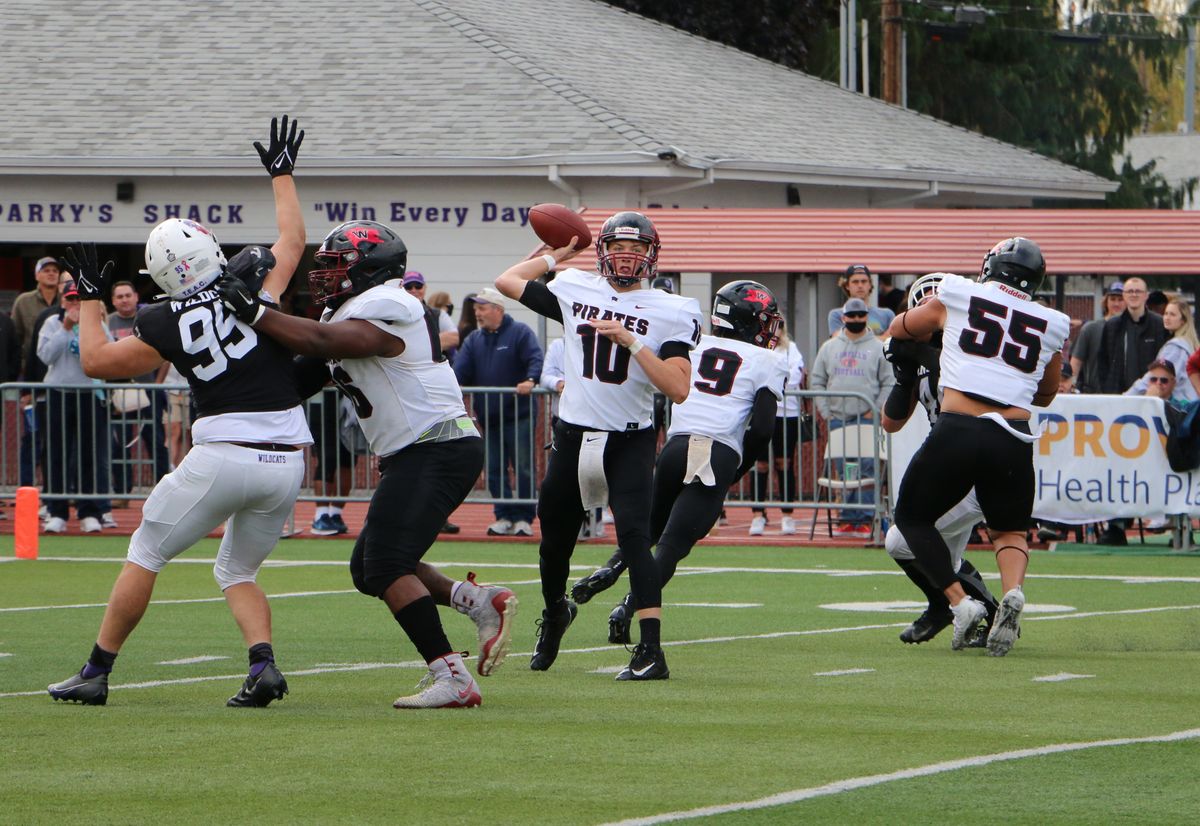 Whitworth: The showdown turned out to be a beatdown. Host Linfield scored the first six touchdowns and rolled to a 42-7 victory over the Pirates. Jason Shoot has the coverage.

Preps: Dave Nichols took his usual look back at Friday night’s football action and also put together a roundup of Saturday’s events. … Drew Rasmussen had one scout who felt he was a perfect choice out of Mt. Spokane High. Now Rasmussen is repaying that trust in his start for Tampa Bay today. Only that scout is no longer with us. This Ken Rosenthal story in the Athletic shouldn’t be missed.

Chiefs: Jason also has this story on Spokane’s first win of the season, a 5-1 rout of Tri-City in Kennewick.

Seahawks: Is Russell Wilson’s injury just a bump for Seattle or the end of an era?

Mariners: The National League divisional series continued Saturday, with the Braves and the Dodgers both winning on the road.

Sounders: For the 13th consecutive season, Seattle will participate in the MLS playoffs. But the Sounders, who defeated Vancouver 4-1 to clinch the spot, want more.

• Enjoy your less-crowded-than-usual Sunday. Until later …