ALMIRA, Wash. – Smoke billowed from the ashes of the Almira School on Wednesday morning as a young student walked around the building and firefighters battled hotspots. The student then spotted one of his teachers, huddled near her car. The pair embraced.

“It’s going to be OK,” she said to her student as tears streamed down both their faces. 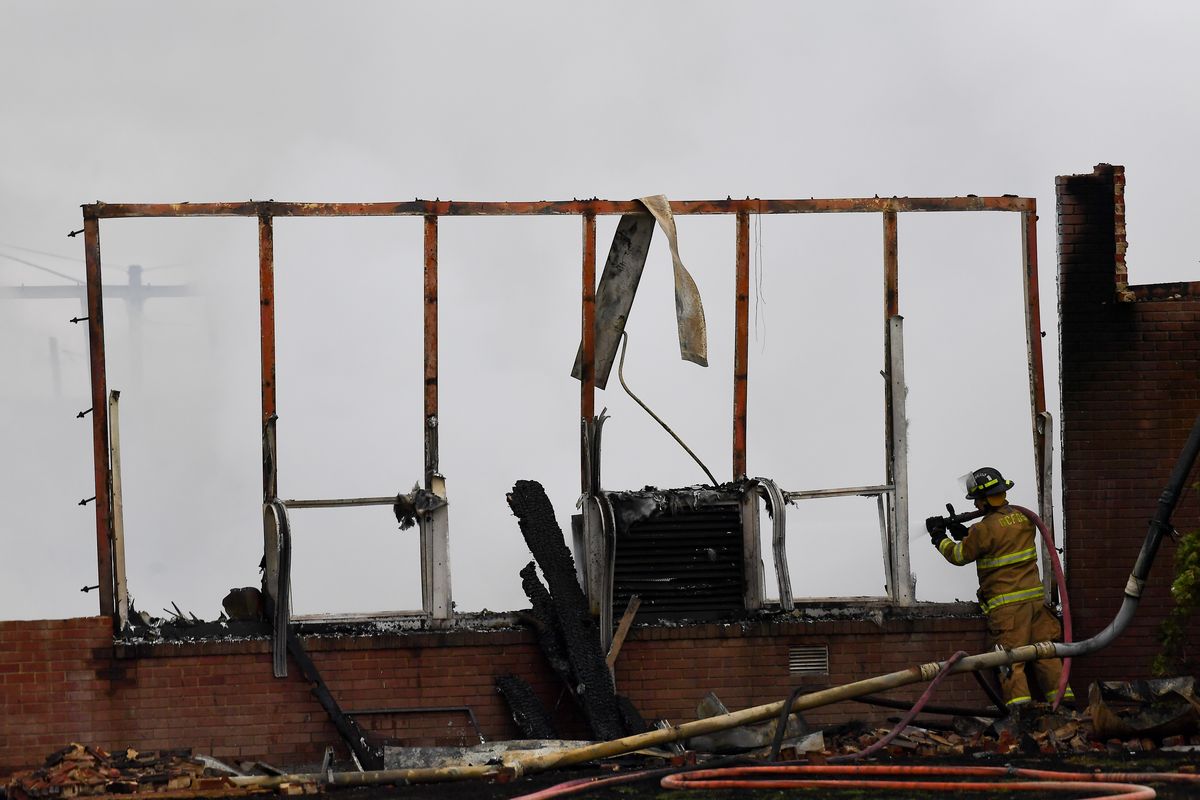 A firefighter hoses down a flareup in what is left of the Almira School on Wednesday, Oct 13, 2021, after the school burned Tuesday night in Almira, Wash. (Tyler Tjomsland/The Spokesman-Review)

The town of Almira is home to about 300 residents, many of them farmers who have lived in the area for generations. The Almira School was built in 1952 after another fire damaged the existing school in 1951, said Denny Pinar, fire chief at Lincoln County Fire District 8 Almira.

There are 118 students attending school in Almira from kindergarten through the eighth grade; then they’re bused to Almira/Coulee-Hartline High School in Coulee City. The school was shaped like a horseshoe, with the elementary school on one side, offices in the center, then the middle school and gym off to the other side. The hallways were lined with decades-old class photos, sports trophies and other memorabilia.

Many of the teachers had been at the school for years, their classrooms sanctuaries of learning built on decades of experience and legacy.

Just after 4 p.m. Tuesday, Pinar heard reports of smoke and flames at the school. He was on the farm his family has worked for the past five generations about 3 miles outside of town.

When he pulled onto the main road to head down to the school, Pinar said he could already see the smoke.

That’s when he called in all the help he could get.

Almira has a large fire department for a rural area, with 26 volunteer firefighters, 10 of whom are also EMTs. But Pinar knew they would need more help. Crews were called in from as far as Ephrata and Grand Coulee.

When Pinar arrived at the school, there were already flames in the elementary school and a massive cloud of smoke.

Pinar hoped he could seal off the fire from the adjoining administration building to minimize the damage. The fire department held back the flames for three hours, he said, but eventually flames crept through to the next building.

Then it hit the school gym.

“The gym was huge,” Pinar said. “It had wood stage, wood bleachers … so the fuel load was intense.”

Football coach and teacher Mana Victorino said it turned into a “fire tornado.”

Despite a hundred firefighters pumping 500,000 gallons of water onto the building, Pinar said, it was a total loss.

Luckily, the power had been out in Almira all day, causing school and athletics to be canceled and the building to be empty, Pinar said. No one was injured.

As the flames grew, so did the crowd of people on the football field next to the school. Pinar estimated about 75 to 80 people stood there watching the school burn.

“Everybody took a seat up on the football field, literally, and the whole community was here crying and watching and sharing memories, and falling apart together,” said Theresa Carstensen, who has three children who attend the school.

The wives of local firefighters started cooking, making sandwiches for arriving crews, then breakfast for everyone Wednesday morning at the community center.

By mid-morning Wednesday, kids, parents and staff were arriving to view the damage.

Laureen Robertson, the school business manager, said it was her home away from home.

“This is a loss that’s more than just curriculum and books and desks,” Robertson said with tears in her eyes. “This is the heart and soul of our community.”

Robertson watched the flames burn the night before and fought the urge to run into the building to save her files.

“It was so hard not to run in and grab stuff,” she said. “You couldn’t go do anything. It was the most helpless feeling.”

One person did arrive in time to grab a few things – the assistant football coach, who was able to grab pads and jerseys before the flames took hold.

Victorino said he already has kids on his 14-person, eight-man football team texting him and wondering if they’ll be able to play their rivals from Wilbur on Thursday as scheduled. The school announced Wednesday afternoon the game would go on.

“They’ll be excited to see that,” Victorino said, motioning to the football pads and helmets crowding the bed of his truck.

Up the hill, members of the school board, principal and school district staff gathered to talk about their next steps. The loose plan was to return to online school, as they did earlier in the pandemic, for the rest of the week.

The shift isn’t something students like Brock Carstensen, 6, are excited about, his mother said. But they’ll get through it.

“We figured it out with COVID,” she said, “so we’ll figure it out again.”

Ephrata Fire Lt. Kevin Harmon took this video last night while up on the ladder above the Almira School fire. The fire burned through the entire night and into this morning. pic.twitter.com/X2yNUIezXx