A GRIP ON SPORTS • Before we arrive at our usual Friday destination, that is, looking ahead to the weekend sprawling just out there, we need to check Thursday’s GPS. You know, to be sure of what we just saw.

• Mainly, one of the better postseason games in a while. And we’re not saying that just because the team we grew up dreaming about becoming a part of, won. Nope. The Dodgers’ 2-1 National League Division Series clincher last night in San Francisco was about as good a baseball game as one could watch.

Yes, the ending was unfortunate (or fortunate, considering your point of view), but we will address that in a moment. Right now we would rather exalt in the great atmosphere that seeped through the television set and into our living room. 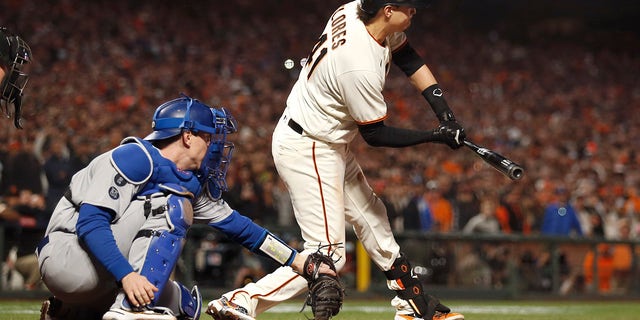 It was throwback, if you will, to a time when baseball was not only our national pastime but the national obsession as well.

A throwback with some decidedly modern touches. The Dodgers used a couple of openers, opting to save their true starter until the third inning. Though tight throughout, no one was playing for a single run, if you don’t count trying to hit the ball to Mars, as Darin Ruf did with the bases empty for the Giants. And the game didn’t finish in the hands of each team’s closer, as Max Scherzer, the soon-to-be Hall of Famer L.A. rented for the stretch run, on the mound for the final out.

And what a final out it was. Wilmer Flores at the plate. San Francisco down by a run. Runner on first. Two strikes.

Scherzer delivered a tantalizing slider low and away that tempted Flores. But he didn’t offer. Except Will Smith, the L.A. catcher, thought he might have. So he asked the home plate umpire to check with first base umpire Gabe Morales. He obliged.

And Morales made a mistake. He called it strike three. Game over. Jubilation. Bedlam. Anger.

Except in the San Francisco clubhouse. At least after the Giants had a chance to cool off. Folks in the land of Haight-Ashbury understand Karma. And Karma it was, with a capital K.

See, back on July 23, Ruf was at the plate in the top of the ninth in Los Angeles. The Dodgers led 3-2. Two outs. Bases loaded. Kenley Jansen delivered high heat. Ruf started to swing, tried to stop and failed. Game over. Dodgers win. Except Ed Hickox, the first base umpire, ruled it no swing. Tie game. L.A. ends up losing.

That one decision, in a season full of them, decided who won the N.L. West. Who hosted this Division series. Who was rested, who was not. Call that a swing and maybe it was Brandon Webb on the Dodger Stadium mound in the bottom of the ninth, trying to earn a save. Maybe Mookie Betts is at the plate, trying to check his swing on a nasty slider. And maybe Morales makes the same call.

Karma? Or just baseball? We’ll split the difference east and west and say it was a little of both.

• Are you a Big Sky Conference football fan? If so, have we got a weekend of television watching for you.

It starts at 7 tonight, when ESPNU shows the nation Ogden, Utah as ninth-ranked Montana State visits No. 19 Weber State. It continues Saturday, at least for those in the West, when ROOT Sports highlights second-ranked Eastern Washington’s game with local rival Idaho. That starts at 11:30 a.m., followed closely by fifth-ranked Montana hosting Sacramento State on SWX at noon.

The other two area football schools, Washington State and Whitworth, go nearly head-to-head in the late afternoon. The Pirates host Pacific Lutheran at 4 on SWX while the Cougars welcome Stanford to Pullman at 4:30 on ESPNU.

But there is more than college football Saturday. Both of baseball’s league championship series are on, with Houston hosting the Red Sox on Fox at 1:20 p.m. and the Dodgers back at it in Atlanta starting at 5 p.m. on TBS. The Astros-Red Sox series begins tonight at 5.

The capper for the weekend comes Sunday night. The Seahawks will play at the Steelers on NBC. That’s usually a big deal in its own right. But there is more. The Hawks won’t have Russell Wilson at quarterback for the first time in years. Instead, backup Geno Smith will take the reins as Wilson recovers from his finger surgery.

That alone makes the game must-watch TV. Add in Seattle and the Steelers both needing a win to stay relevant and it makes it mandatory.

• Derek Sparks’ name may not be the first to come to mind among Cougar fans when thinking about Mike Price’s players. It may after today.

Sparks is dealing with pancreatic cancer and he’s made it a very public fight. Just about every Cougar alum is now aware of it, as Sparks has been keeping them updated through social media.

But there is more to his story. Much more. Theo Lawson is just the person to share it and he does this morning in the S-R. This story about Sparks, his on-going treatment and the support he is receiving shouldn’t be missed, whether you wear crimson or purple or baby blue.

Make some time this morning and read about Sparks’ story. WSU: Besides Theo’s story on Sparks, we can offer other Cougar news. Colton Clark received enough questions this week to put together a mailbag. … Elsewhere in the Pac-12 and college football, Jon Wilner has a stock report in the Mercury News that includes football and basketball. … Washington hosts UCLA this week and it seems as if it’s a crucial game for the Huskies and their run defense. … The last time California defeated an FBS opponent? When it upset Oregon last season. Guess who the Bears play Saturday. … Though neither figures in the conference race, Colorado and Arizona may just play the most interesting game of the weekend. … The most important game in the South happens in Salt Lake City, where Utah plays host to Arizona State. How far have the Utes and Sun Devils come this season? … USC is at the middle point of its season. … In basketball news, Oregon State has some high expectations. … Bill Walton has high expectations for Arizona’s Tommy Lloyd. Gonzaga: Everyone knew the Zags were losing a lot after last season. And they did. Everyone also knew the incoming class was exceptional as well. And it is. Jim Meehan examines how the newcomers are fitting in. … The WCC held its men’s media day yesterday and GU was chosen once again to win the conference. Theo has this story about that and the preseason awards. … Saturday the women take over McCarthey for their FanFest. Jim Allen has all the information here. … Rui Hachimura is taking it slow to start this NBA season. … The Big East is thinking of expanding again. Gonzaga’s name is being mentioned again. A couple years ago, we would have said no way. These days, who knows? … Around the WCC, BYU is leaving the conference in a couple years. The Cougar men would like to win one conference title before they leave. EWU: Dennis Merritt is getting really good at one important aspect of football. He finds a way to get the football in the endzone. Dan Thompson has this story on the senior running back. … Elsewhere in the Big Sky, Northern Arizona can get back to .500 for the season with a win over Southern Utah. … UC Davis has a lot to prove against Northern Colorado. … The same can be said about Weber State as it hosts Montana State. … There are some connections between Montana and Sacramento State. … Portland State returns home to face Idaho State. Idaho: It looks as if Zach Borisch will once again be the starting quarterback for the Vandals as they face Eastern on Saturday. Peter Harriman recounts the steps that have brought the former fourth-string player to the forefront for the second consecutive season.

Whitworth: The Pirates were knocked around by Linfield last week. They are home Saturday and will try to get right against Pacific Lutheran for Homecoming. Dave Nichols has a preview.

Preps: It was a busy Thursday and Dave has this roundup of the action. … We don’t link stories about middle school football on a regular basis, but after what happened the other night in Almira, Emma Epperly’s piece seems appropriate to pass along. Horse racing: Ross Yearout, who ran Playfair for many years, died earlier this month. He was 78. Jim Price has his obituary in toady’s S-R. On a personal note, we have a lot of connections with Ross, and not just through his children who have coached high school sports in Spokane as long as I can remember. It was my honor to be inducted into the Inland Empire Softball Hall of Fame the same year as Ross. His son Tom made as good an induction speech for his father as I’ve ever heard.

Seahawks: As we said, Smith takes the offense’s reins Sunday. It’s been a long road. … The defense has to play better. … Wilson had fun at practice yesterday. He even threw some left-handed passes. … Chris Carson did not practice.

Mariners: Most M’s fans have probably already read this, but we need to pass along Mitch Haniger’s piece in The Players’ Tribune. He’s basically guaranteeing the M’s will end their playoff drought. … Watching your more-than-100-win team lose a game and flame out of the playoffs is something Mariner fans can relate to. This is a great column about the pain.

Kraken: Seattle picked up its first win ever last night and, as far as I could tell watching the action between baseball innings, played well in Nashville. … The Kraken focused on stopping transition.

• Mornings have been long this week. A new puppy demands a lot of attention. But it’s worth it when he jumps into your lap and wants to show you how important you are. It’s been many years since that’s happened around here and it never gets old. Unlike me. Until later …