A GRIP ON SPORTS • How often over the years have you heard coaches and players talk about controlling the things they can control? How they know they must not spend time worrying about the other flotsam and jetsam, but concentrate on what they actually have an influence over? If it has been once, it has been a hundred-thousand times.

• When you hear it after a game, it’s usually winners talking. Before? The worry becomes the static they are referring to has already crept into their heads. 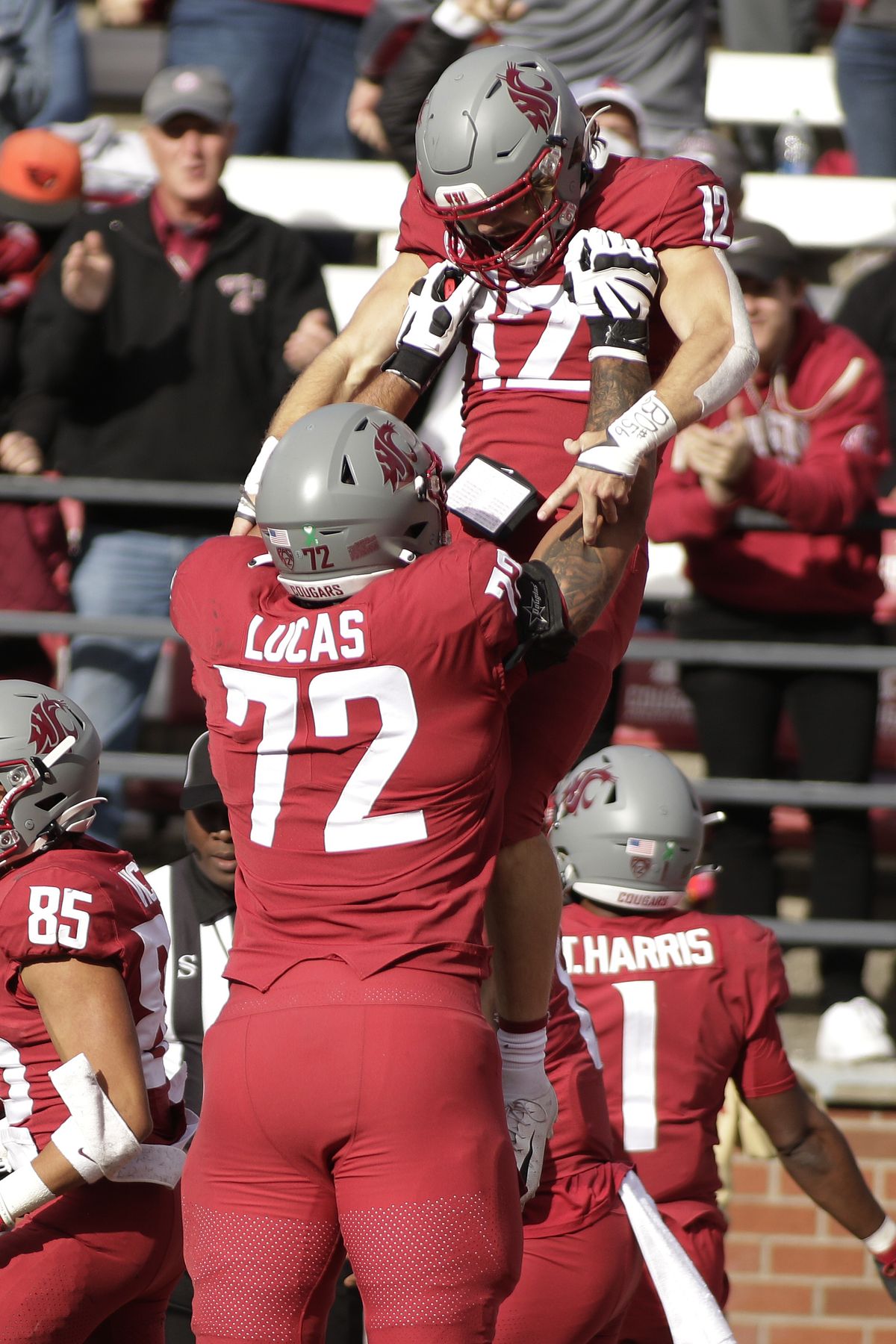 Which is it this afternoon in Pullman?

Will the Cougars stuff all the Nick-Rolovich-is-coaching-his-last-game noise in their lockers, take the Gesa Field turf and discombobulate Stanford in the same way they have done California and Oregon State the past two weeks? Or will they be looking over their shoulder, lose focus and revert to their early season uncontrolled ways?

Hey, they are college kids. You know what I mean? Your guess is probably as good as mine.

It’s easy to say they will be worried whether the guy in charge (and probably more than a couple of position coaches) will be cut loose if they don’t receive a COVID-19 vaccination exemption and, more importantly, accommodation. But they don’t control that, do they? There’s really only one person who does – you know, the guy who probably tells them at least five times a week to focus their energy solely on what they can control – and he hasn’t taken the one step that could make this all disappear. Whether he will or not is out of their control.

Maybe this group of Cougars, written off four weeks into the season, is a more mature bunch than we know. Maybe they really have bought into that control mantra. Forget the static, focus on the music.

The music has been symphonic the past couple weeks on the defensive side. A little bit of jazz from the offense. With gold-record results.

Stanford is a bit tougher challenge, however. More like Tchaikovsky than three-cord rock and roll. The Cardinal conductor, David Shaw, is the highest-paid coach in the conference, raking in almost $10 million a year. For that money his teams better perform like Bruce Springsteen. But, seemingly, the glory days are behind Stanford who has been run over three times this season but also holds a win over Oregon. 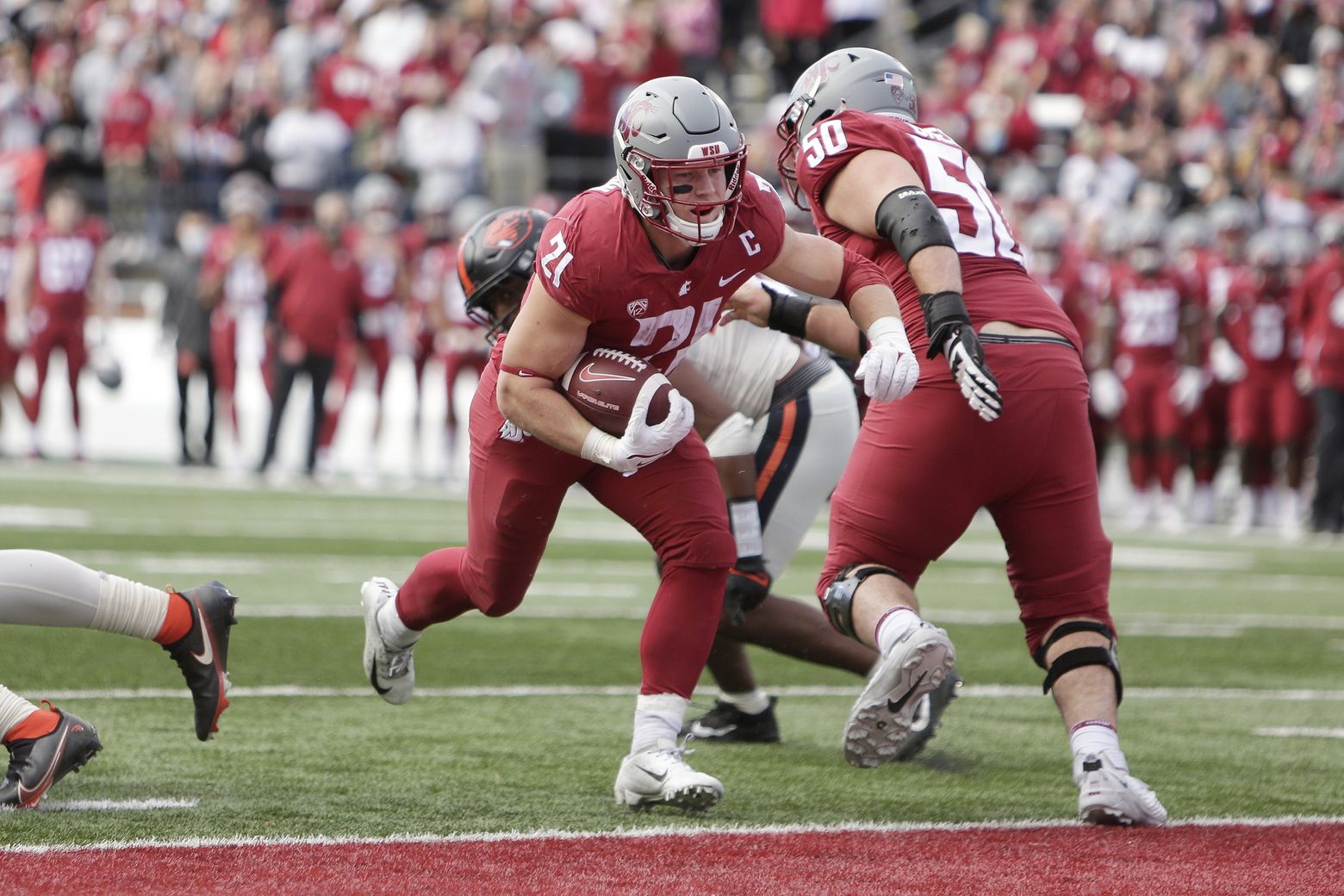 WSU has won the last four times the teams have met. Of course, Rolovich wasn’t the guy in charge then as last year’s contest, ironically, fell victim to COVID-19. He is now. But will he be Monday? Uncertainty reigns.

One thing is for certain. No one wearing a Crimson helmet this evening – the game starts at 4:30 and will be televised by ESPNU – has any control over that.

• We have a confession to make. As much as we enjoy watching the Cougars play football, if we weren’t getting paid to watch tonight, we would be focusing our control over the remote and watching the Dodgers against the Braves.

At the least, that game would be No. 1 and the Stanford matchup would be more of the switch-to-it-between-innings backup.

This baseball postseason has caught my attention. Though I don’t really know for certain why.

Maybe it’s because the M’s made a run and almost made it. Or maybe it’s because of the Giants’ resurgence and the Dodgers’ resilience. Or it could be about the past too, since L.A. lost a World Series to the Astros in 2017 and the Red Sox in 2018, both of which very well could have been cheating in them. Revenge is a strong motivator, at least in Sicilian households like ours.

But the S-R has bought my eyeballs (and ears and fingers) tonight. And, no matter what, the Dodgers will either win or lose. I know I have no control over that.

Besides, baseball games take so long these days, I’ll probably still get to watch seven innings after I’ve filed my TV Take. That will have to be enough. At least tonight. 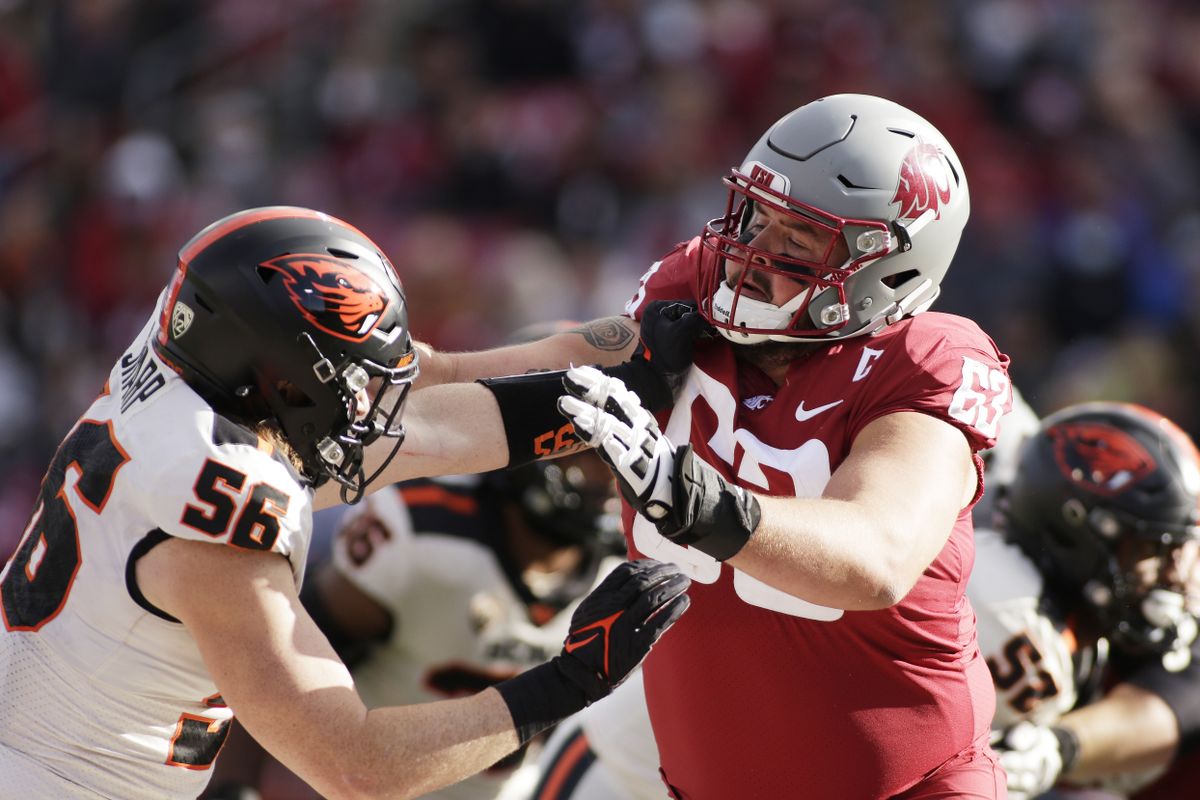 WSU: Colton Clark was right last week. Will he be right today? He has the Cougars winning their third consecutive game. … Besides his pick, he has a preview of the game, focusing on Washington State’s belief it is hitting its stride. … He also has three things to focus on against the Cardinal. … The Seattle Times delves into what may happen next week with Rolovich and presents a preview of the game. … Jim Moore also addresses the Rolovich issue today. … Elsewhere in the Pac-12 and college football, Jon Wilner looks ahead a bit in the Mercury News with these answers. … The weekend began last night with Oregon playing a sequel to its Stanford loss of a couple weeks ago. This time, however, the script held a different ending. The Ducks held California out of the endzone in the end and won 24-17. It’s a win, sure, but the nation’s ninth-ranked team didn’t look the part. … Washington hosts UCLA this evening and may have Zion Tupuola-Fetui available. The Huskies may need him of the Bruins get their offense going. … Pole position in the South is up for grabs today when Utah hosts Arizona State.  … If Arizona can’t win against Colorado today, will the Wildcats win a game? After a bye week, the Buffs will do whatever they can to ensure that embarrassing result doesn’t happen. … In basketball news, Arizona has been challenged more in practice lately. 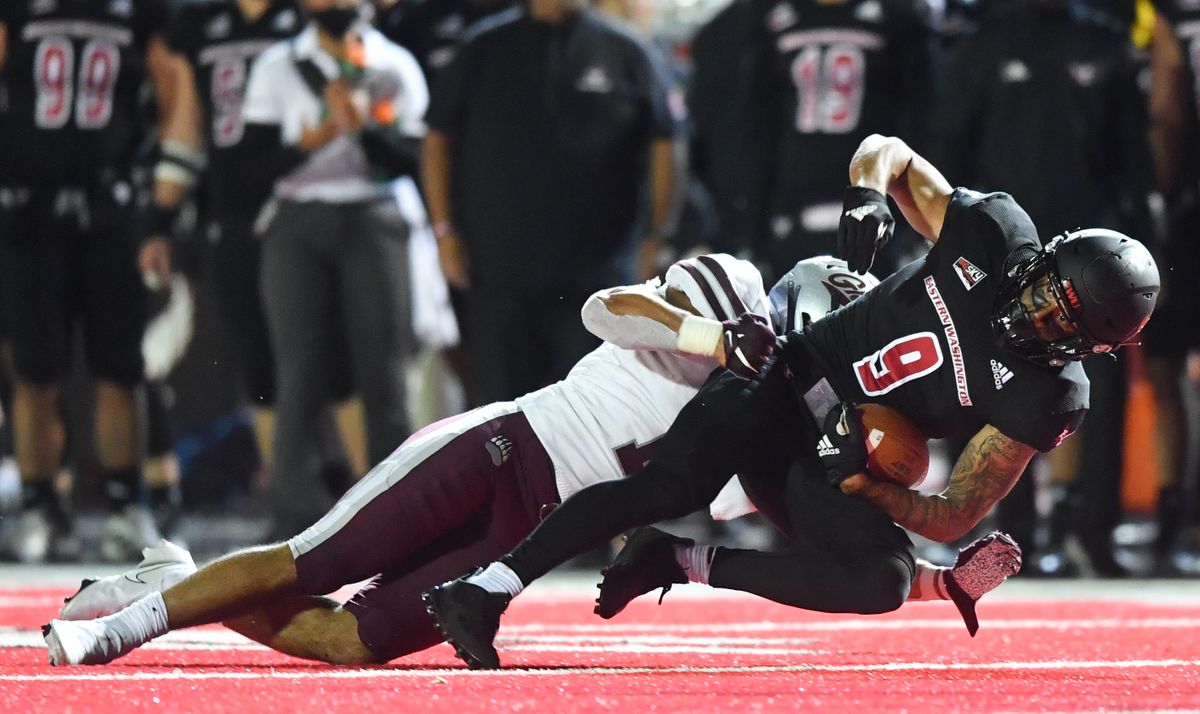 EWU: The Eagles host UI this morning at 11:30 a.m. on ROOT Sports. For Eastern to win, Dan Thompson tells us these are the three things it will need to do. … Elsewhere in the Big Sky, we watched a bit of Montana State’s hard-fought 13-7 win at Weber State last night. It didn’t seem like a typical Big Sky game to me. For one thing, the Wildcats, winners of the last four conference titles, aren’t winning a fifth this season. … When Montana hosts Sacramento State today, the outcome should be more typical of the conference.

Idaho: If the Vandals want their trip home down U.S. 195 to be a fun one, these are the three things they’ll need to do, courtesy of Peter Harriman. 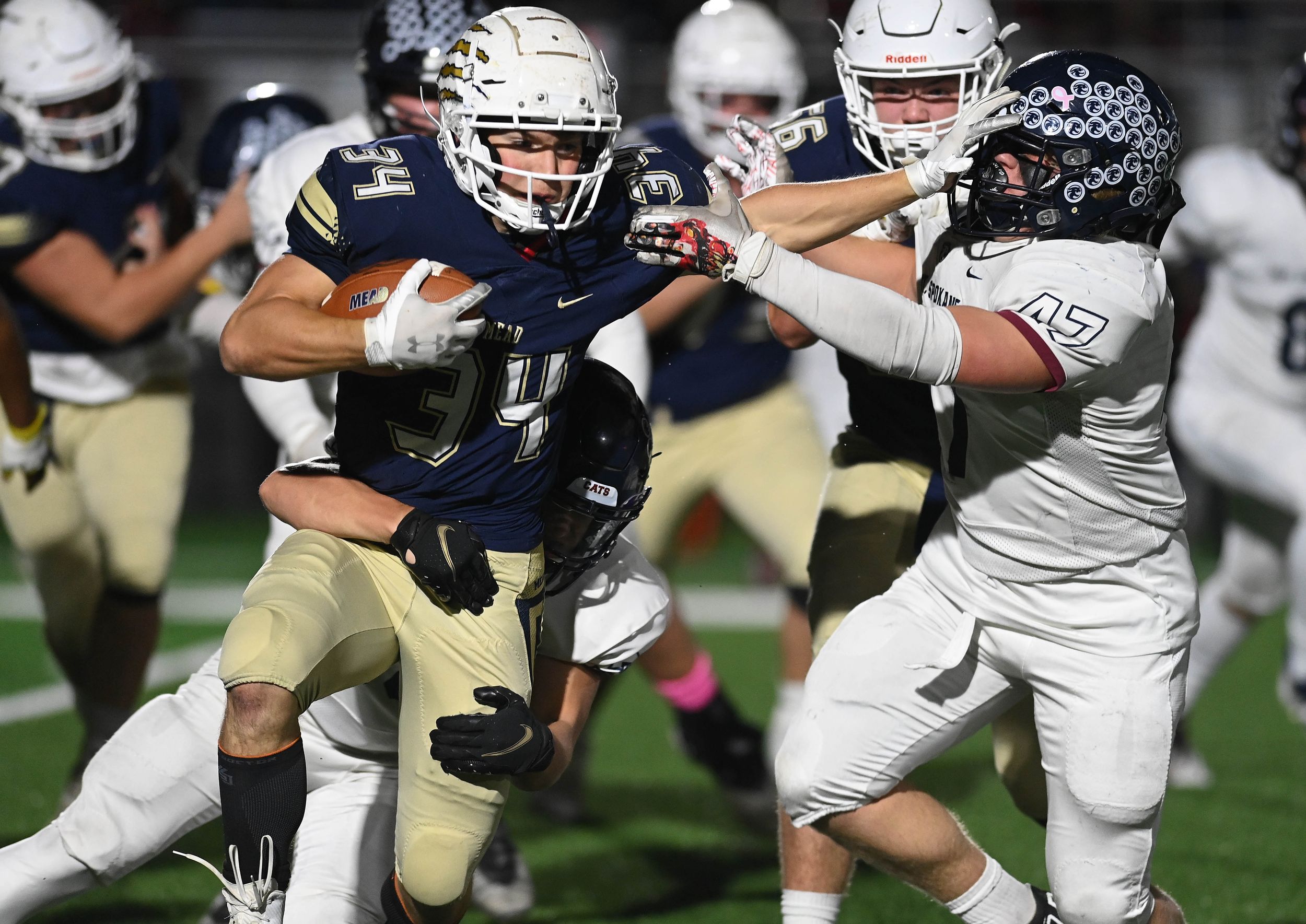 Preps: There was a traditional rivalry game at Union Stadium on Friday night. And Mt. Spokane prevailed in the Battle of the Bell. Dave Nichols has that story and Colin Mulvany presents a photo report. … There was a more untraditional rivalry last night as well, with Lakeside holding off Riverside 6-0 in the 1A ranks. Madison McCord has that story. … Dave also has a roundup of the rest of Friday night’s football action.

Chiefs: Despite a slow start, Spokane is tied for second in the WHL’s U.S. Division after a 3-0 win at Tri-City last night. 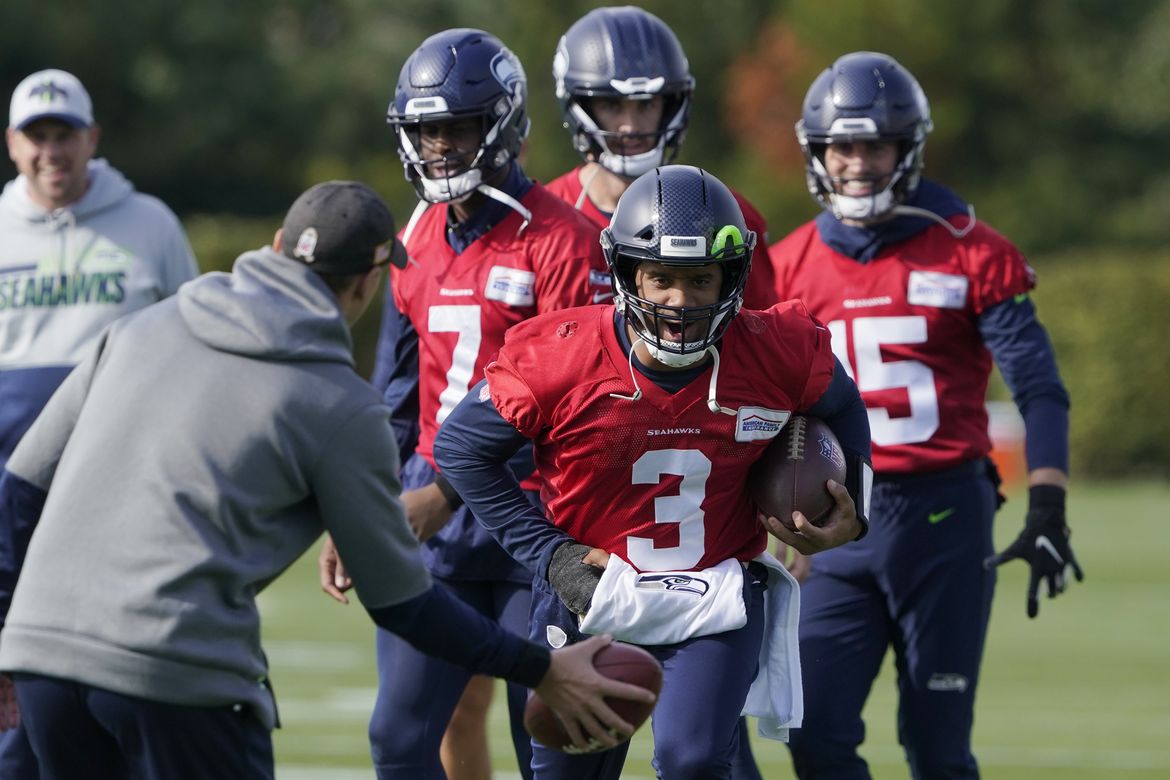 Seahawks: Russell Wilson is on injured reserve. So is Chris Carson. So what chance do the Hawks have in Pittsburgh? The saving grace for Geno Smith and Seattle is the Steelers aren’t the NFL’s best team. … Michael Dickson’s double punt is still being talked about.

Mariners: We watched much of the Astros’ 5-4 win over the Red Sox. Not as a fan of either team but just as an observer. Did anyone else hear that banging noise before pitches? Just kidding.

Kraken: COVID-19 protocol kept usual Kraken play-by-play voice Everett Fitzhugh from doing the game in Nashville, so WSU alum Ian Furness stepped in. And got to do something he’s always wanted to do.

Storm: Courtney Vandersloot and the Chicago Sky are a win away from claiming the WNBA title after hammering Phoenix at home.

Sounders: Jimmy Medranda has stepped it up for Seattle.

• Experience is a good thing. But when experience starts to bleed into your day-to-day work in inappropriate ways, it isn’t. Take yesterday, for instance. A reader was nice enough to send me an email pointing out a mistake. I referred to San Francisco Giants standout Logan Webb as Brandon Webb. You know, the former Diamondback pitcher that ruined more than a few Roto teams for me back in the day. Daily column, meet subconscious. Sorry about that. Until later …