PULLMAN – After only 11 games, the Nick Rolovich era at Washington State is over.

Despite the Cougars’ recent breakthrough under their second-year football coach, Rolovich’s tenure won’t be remembered for much else besides its unprecedented conclusion – and the controversial personal decision that ultimately resulted in his termination.

He drew his line in the sand three months ago and did not budge, declining to receive a COVID-19 vaccine.

Instead, Rolovich’s employment hinged on a religious exemption application.

The school announced Monday that Rolovich, along with four of his WSU assistants, had lost their jobs after failing to comply with a Washington mandate, which required the state’s educational employees to be either fully vaccinated or have received an exemption approval by Monday.

Defensive coordinator Jake Dickert will take over as interim coach for the Cougars’ remaining five games of the regular season and WSU will conduct its second coaching search in as many years.

“It is disheartening to be here today. Our football team is hurting, our WSU community is fractured,” athletic director Pat Chun said in a press conference Monday evening.

“To be at this juncture today is unacceptable on so many levels and antithetical to the WSU experience our student-athletes so richly deserve. I’m saddened for our football alumni and to all the proud Cougs all over the world for the fracturing that has transpired over the past few months. We need to infuse compassion, empathy and unity back into our WSU community, and that healing process needs to begin immediately.”

Rolovich was terminated for cause because he is “no longer able to fulfill the duties as the head football coach at Washington State University,” per a school release. That means the school does not owe Rolovich any of the remainder of his contract, which ran through June 2025.

Chun said the university decided it wouldn’t be possible to accommodate Rolovich’s exemption request, an indication that the coach’s exemption application may have been approved by a blind committee. If that were the case, Chun would have had to determine whether Rolovich could carry out his duties safely. Chun and WSU president Kirk Schulz declined to elaborate further.

The fallout from this bizarre situation presumably will be immense. Rolovich’s midseason departure puts the future of WSU’s program in murky waters.

It’s uncertain how the Cougars will adapt with only six coaches.

“It’s problematic,” Chun said. “We’ve been working on contingency plans. Nick did give us some input on some of those contingency plans. We’ll work with the staff, with coach Dickert and (offensive coordinator) Brian Smith to decide who we can get in here to start helping out.

“It’s a very detailed, intricate offense, this run-and-shoot. And to get the right coaches who can help assist, there just aren’t a lot of people on the streets right now. We’ve been working on this for a couple of weeks just in case.”

Although Rolovich, 42, wasn’t technically obligated to share the private details behind his reasoning for refusing the vaccine, his defiant attitude and stance of silence rubbed many the wrong way.

The situation evolved almost immediately into a complex political debate – on a national scale – and a public-relations crisis for the university.

Rolovich’s supporters commended him for standing his ground. But he was criticized heavily for his position, which was viewed as selfish and contradictory to his high-paid leadership role at a major research institution.

“It’d be naive of me to say this wasn’t affecting the perception of Washington State University – certainly in the state, with prospective students, with donors,” Schulz said, noting that about 90% of WSU employees are vaccinated, and there are just seven active coronavirus cases at the school.

“Internally, within Washington State University, from our faculty and staff point of view, there’s been a lot of frustration with such a prominent employee choosing not to be vaccinated.”

Schulz said the reaction from alumni has been “mixed.”

“We’ll probably have some people who elect to maybe not financially support WSU because they don’t support the decision,” Schulz said. “I got an email just about 45 minutes ago from an alum that said, because of our decision, he was tonight going to make a donation to two colleges.”

Rolovich sidestepped questions for a couple of months on how he would comply with the mandate. He reiterated simply that he’d “follow the mandate,” which was announced Aug. 18 by Gov. Jay Inslee.

“We’ve had conversations that date back months,” Chun said. “He was resolute in his stance, and he was ready to make a choice. That choice didn’t put him in compliance with this proclamation from the governor, and that’s why we sit here today.” 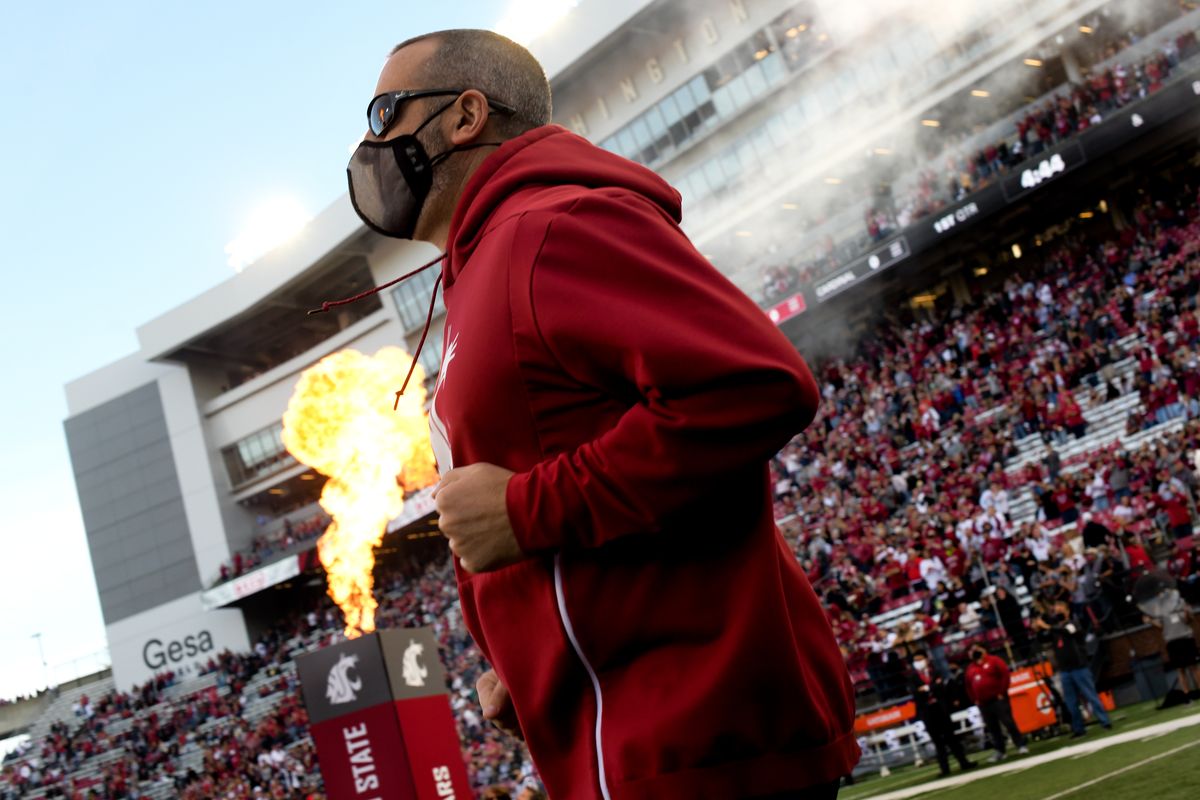 Washington State Cougars head coach Nick Rolovich heads to the field before the start of the first half of a college football game on Saturday, Oct 16, 2021, on Gesa Field in Martin Stadium in Pullman, Wash. WSU won the game 34-31. (Tyler Tjomsland/The Spokesman-Review)

Following WSU’s win over Oregon State on Oct. 9, Rolovich confirmed that he had put in for a religious exemption after June Jones, his mentor and former coach at the University of Hawaii, leaked the information to USA Today.

Rolovich was raised in a Catholic household and attended a Catholic high school north of San Francisco, but declined to publicly comment on his religious ideologies.

The Cougars topped Stanford 34-31 on Saturday with a dramatic finish. WSU players showered Rolovich with a Gatorade bath and several shared long embraces with the coach on the field. A social media video from WSU’s athletic department showed the Cougs chanting “Rolo” in the locker room postgame. It certainly felt like WSU was celebrating some sort of finale.

Rolovich said during a postgame media session that he was awaiting an email that would clarify whether his religious exemption had been granted. He said he didn’t know if he’d get a chance to finish his first full season in Pullman.

Rolovich had been settled on his stance for “a long time,” he said, and believed the exemption process would “work out the right way” – meaning he would retain his job.

“If that’s not what (Chun) wants, then I guess I’ve got to move on,” Rolovich said. “But I like being here. I like being the coach here. I love these kids. I’ve just got faith in (the process).”

Rolovich did not respond to a text message asking for comment.

The athletes have backed their coach. Receiver Travell Harris and tackle Abe Lucas praised Rolovich for his player-first style. Quarterback Jayden de Laura was eager to speak on the subject earlier this month.

“I respect him. I love him to death. I’d do anything for him.”

Chun indicated that Rolovich left campus and did not speak with the team after the two met earlier Monday. Chun and Dickert addressed the players.

“They don’t deserve this,” Chun said. “That is a real point of heartbreak. This 2021 team and this upper-class, unfortunately for them, they have a lot of experience persevering through adversity.

“Their response is what you’d expect out of a bunch of college-aged young people that lost their head coach and a bunch of position coaches. … They handled it maturely, but without a doubt, there was a lot of disappointment, sadness, anger.”

Chun was asked whether any players indicated to him that they will not play because of the change in leadership.

Rolovich was hired in January 2020 after four seasons at Hawaii to take over for Mike Leach, who led the Cougars for eight mostly successful years.

The new boss seemed like a perfect fit for the Pullman school. He had the flair and personable qualities that signaled a promising future at WSU.

Rolovich’s hiring was received well. Considered a sharp offensive mind, his unique style – dubbed the “run-and-shoot” – was expected to allow for a smooth transition from Leach’s Air Raid.

“I take full ownership and responsibility for hiring Nick,” Chun said. “In January of 2020, based on all the information we had at the time – including extensive references and conversations with knowledgeable football experts, we believed we found the perfect fit and a long-term solution for Washington State football.”

He won over the fan base quickly with his personality and some charitable donations to area businesses in the early days of the COVID-19 pandemic.

Rolovich tweeted that he had elected to not receive a coronavirus vaccine for “private” reasons and would not be able to attend the Pac-12’s annual Media Day in Los Angeles due to the event’s vaccine requirement. He is the only major college football coach to publicly refuse a COVID-19 vaccine.

Rolovich is facing a lawsuit from former wide receiver Kassidy Woods, who alleges that his rights were violated last year when he was kicked off the team after joining the WeAreUnited player movement and complaining about potential COVID-19 exposure.

Rolovich finishes with a 5-6 record at WSU. The Cougs played only four games last season and had three canceled as a result of COVID-19.

His 11-game stint at the helm of WSU’s football program matches Jackie Sherrill (1976) and Warren Powers (1977) for the shortest tenures in Coug history.

His dismissal comes amid the Cougars’ best stretch of play in three years. They sit at 4-3 after rebounding from a tough start to record three consecutive victories.