A GRIP ON SPORTS • Nearly three months ago, Monday’s circumstances in Pullman were made inevitable. It’s been 90 days since Washington State football coach Nick Rolovich announced he had not received the COVID-19 vaccine and, due to personal convictions, he would not. Ninety days of sadness.

• Why? Well, we can’t speak to Rolovich’s reasons, as he’s not explained them other than to finally state they were religious in nature. The sadness part is easy to expounded upon, though. 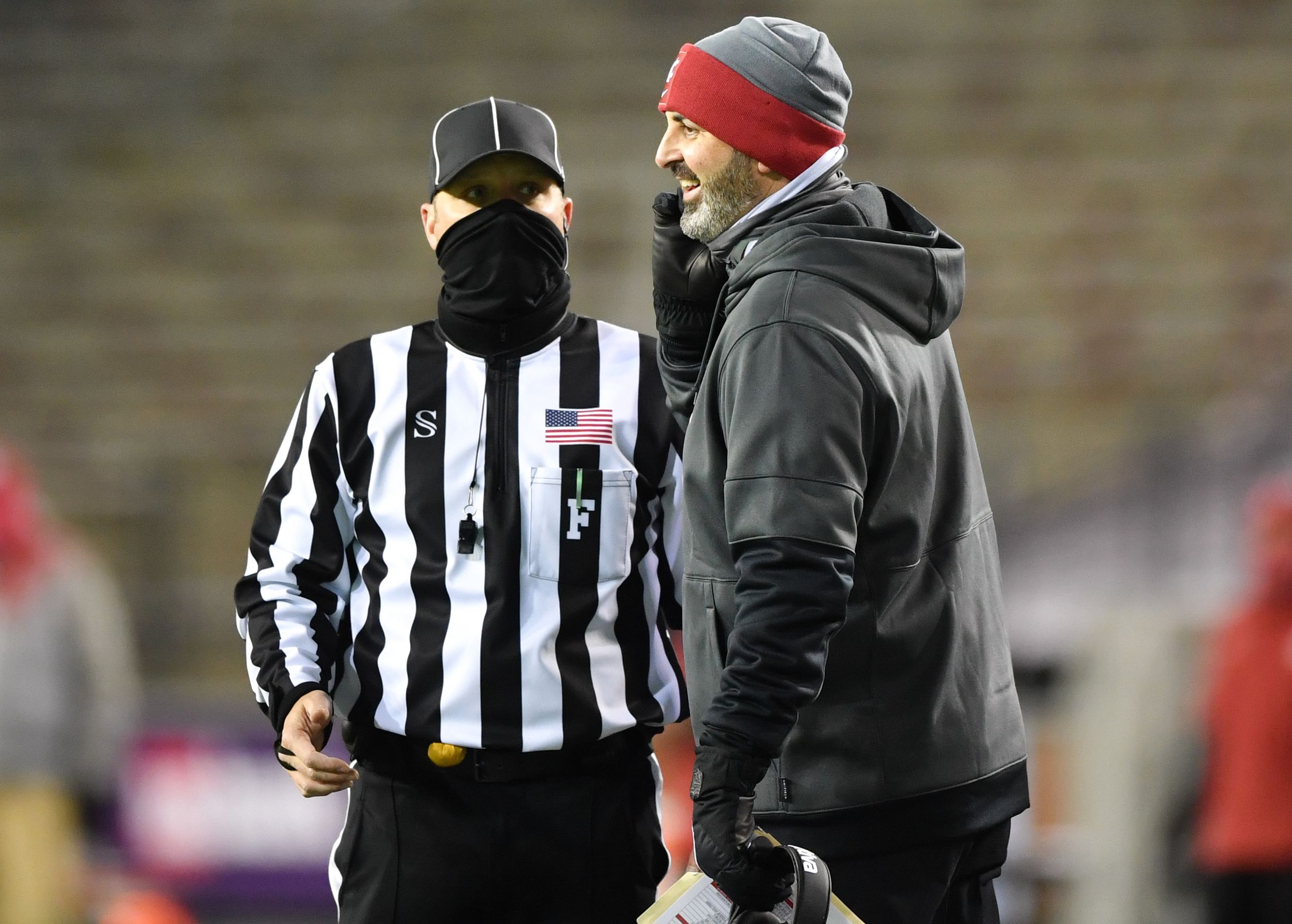 It’s sad for Washington State’s players. The coach they have come to know is gone. The one that, in many cases, gave them their first chance. The coach that believed in them. Losing that coach – and in WSU’s case, four other assistants – is a blow.

We went through it at their age. Our baseball coach at UC Irvine was fired after a successful year. Though it happened 45 years ago, it still hurts. Still stings. Still seems unfair.

It was. And no one will ever change my opinion.

The same may happen for this group of Cougars. In 2066, a group of them may gather for some unknown reason and bemoan Rolovich’s fate. They may still feel the way many of them felt yesterday – and shared publicly.

Or their minds may change. They may, after a few years of quiet reflection, understand why it had to happen. Understand their coach had a choice. Had a chance to help each of them, and the public at large, escape from this hell of a pandemic and get back to a semblance of normal. Had a chance to respect the wishes and life work of his school president and accept his decision. Had a chance to model other-based behavior and said no.

We can’t predict if that will become the case. Just as we can’t estimate how many WSU football players already understand this. How many see Rolovich’s actions over the past 90 days as inappropriate. How many are disappointed not in the school but in their former coach. 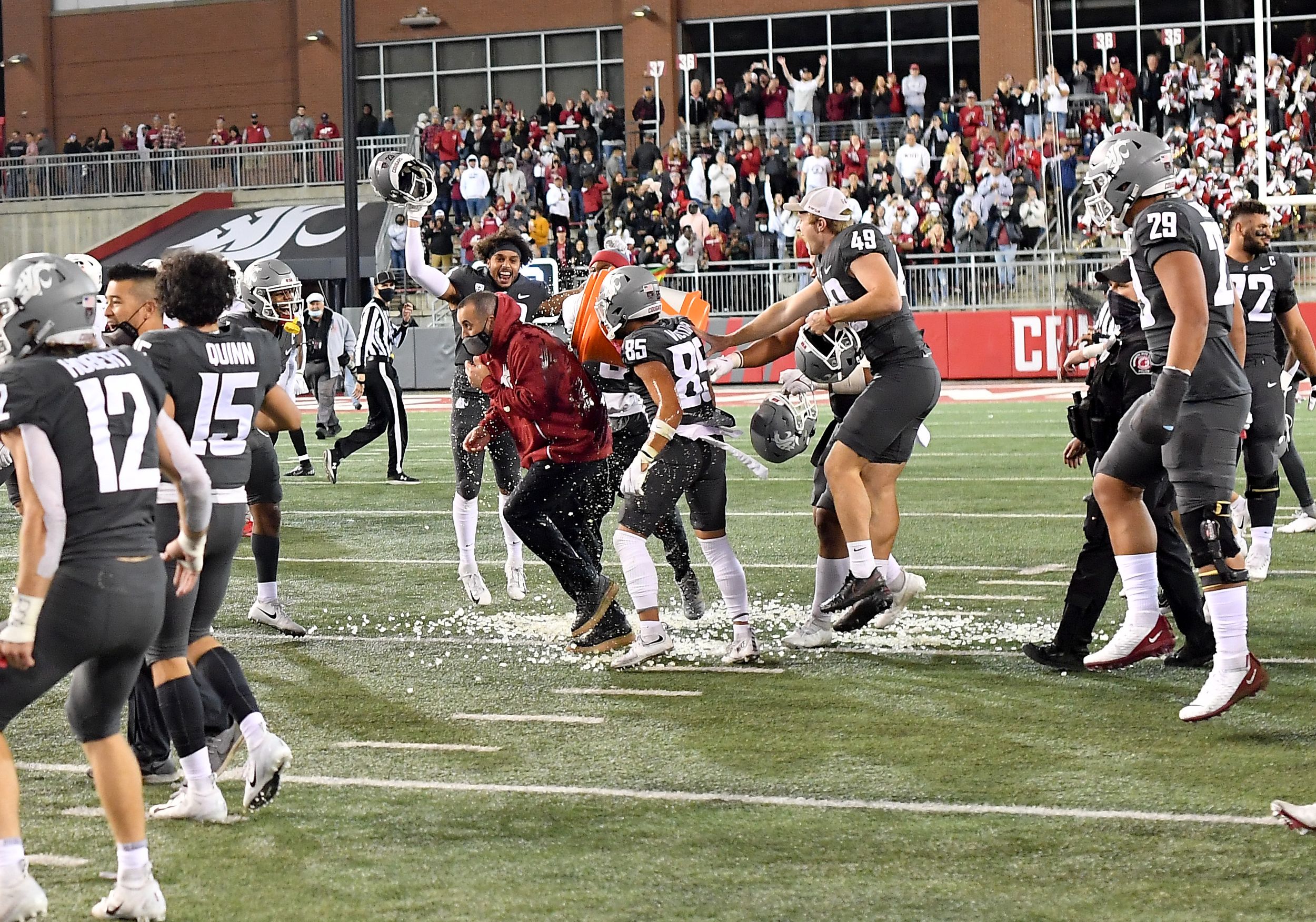 With some 130 college students on the roster we can say with some certainty, however, there are some. Maybe a lot, maybe a few. But they are in that lockerroom.

Now all of them have to put whatever feelings they have about the change aside. Have to come together. Have to play a football game Saturday before a wild throng of Washington State fans in Martin Stadium united by one goal: to help them through it.

That’s one thing we are certain about. Cougar fans may have been divided the past 90 days concerning Rolovich’s actions. They may still be divided concerning the school’s – always inevitable – action. And they may never see eye-to-eye about it. But they do believe in the players. They want to cheer Jayden de Laura, Max Borghi, Jahad Woods, Brennan Jackson. They want their team, the Cougars of Washington State, to defeat their opponent, this week, the Cougars of Brigham Young.

The other stuff? For four hours Saturday it has to be nothing more than a quiet hum in the background, drowned out by an overwhelming explosion of noise, aimed at supporting the players who had no say in this matter.

There was only one person who did. And 90 days ago he decided to make his stand. Monday, he paid a price. But even more importantly, so did 130 or so young men who shouldn’t have. 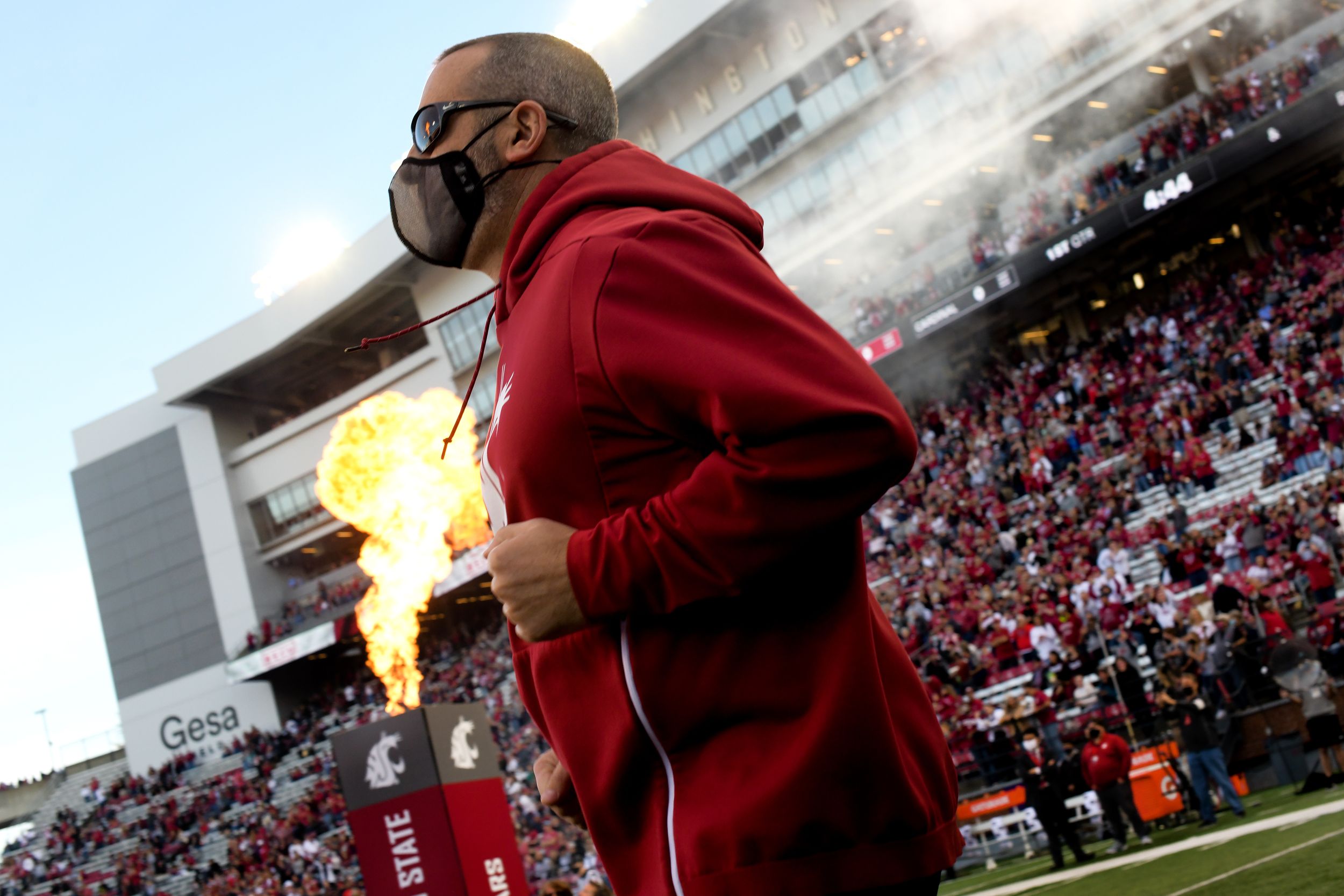 WSU: Of course this section this morning will be filled with the news Rolovich’s contract was terminated Monday. We can offer the coverage from the S-R’s staff, including John Blanchette’s column, Colton Clark’s story on what occurred, Theo Lawson’s summary of the players’ public comments and Dan Thompson’s look at interim coach Jake Dickert, who has been Rolovich’s defensive coordinator. … That’s not all, though. There is a photo gallery on the S-R’s website and Colton’s story on the Oct. 30 game kicking off at noon at Arizona State. … From other quarters, there is coverage of the change in the Seattle Times, from Art Thiel at SportsPressNW and Jon Wilner’s thoughts in the Mercury News as well as coverage at CougCenter. … National outlets like USA Today and Sports Illustrated also opined about the move. … In less divisive news, the Cougars hired a baseball operations director. That and college academic awards leads off our weekly local briefs column. … With BYU the opponent this week, there is a decent amount of coverage of the Rolovich situation in Utah papers. … Elsewhere in the Pac-12 and college football, Wilner also had his conference power rankings on the Mercury News website this morning. … In more normal news, Washington coach Jimmy Lake is standing by his quarterback. … Who are you standing with this Saturday? Tenth-ranked Oregon, who will have its offensive coordinator available, or unranked UCLA, with former Duck coach Chip Kelly showing a revived running game? … Oregon State is coming off a bye before the Beavers host Utah. The Utes have been tested a lot recently. … Colorado is coming off a win but host California will be really hurting for one. … USC and UCLA have made good use of the transfer portal this season. … Arizona is having to shuffle its quarterback list again before it hosts Washington. … In basketball news, UCLA held its media day and the second-ranked Bruins had a lot to show off. … Oregon is the only other ranked Pac-12 school. Didn’t the conference sort-of dominate the NCAA tourney? … Colorado needs to have some players take big strides. 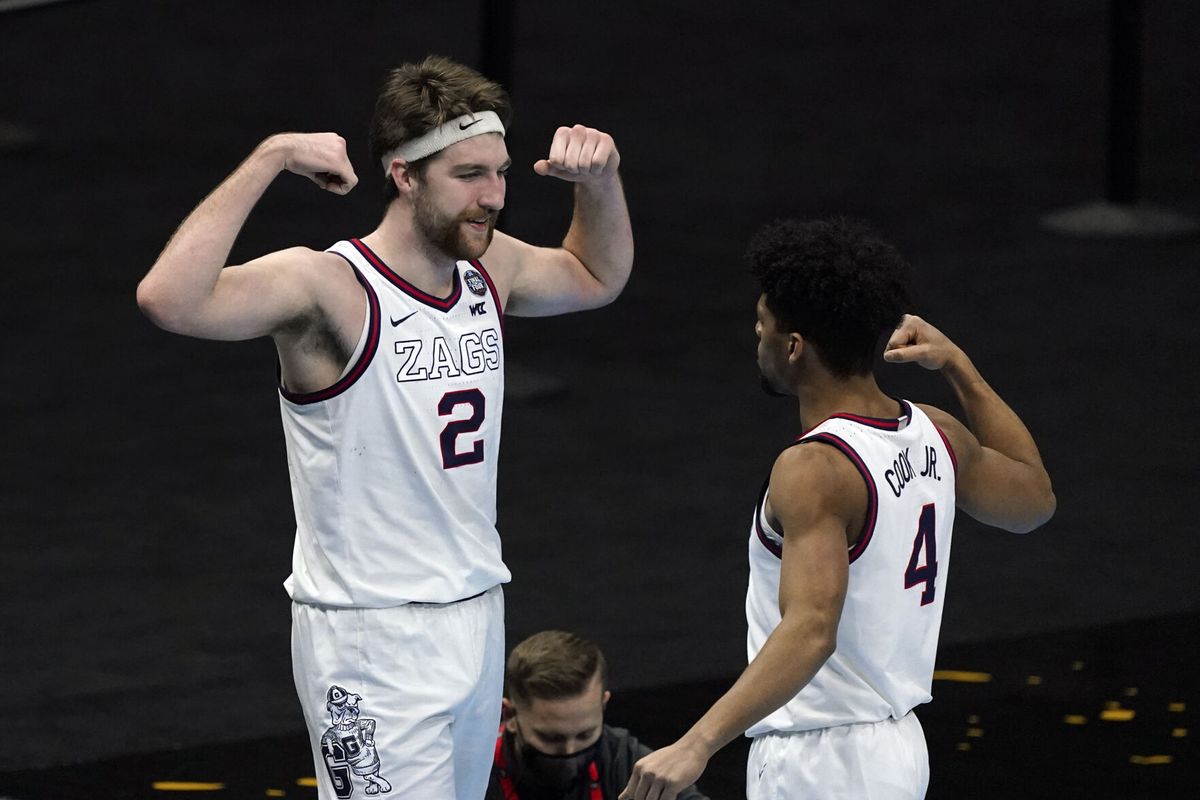 Gonzaga: It’s funny. Most times the news GU is the top-ranked basketball team in the nation would be the most important piece of sports information in the area. Today it’s a bit of afterthought. And what went on in Pullman yesterday isn’t the only reason. The Zags have been ranked No. 1 so long and so often, it’s starting to seem a little old hat. Imagine that. Jim Meehan has more on the A.P. preseason ranking. … Senior Andrew Nembhard is a Bob Cousy Award preseason watch list member. Jim has that story as well. … Jim also joined Larry Weir yesterday for the latest Press Box podcast. … The women are still trying to figure out how all their new faces and experienced players fit together. Jim Allen talked a bit with Lisa Fortier about it. … Seth Davis also ranks Gonzaga No. 1 in The Athletic, with Drew Timme and Chet Holmgren on his preseason All-American first team. 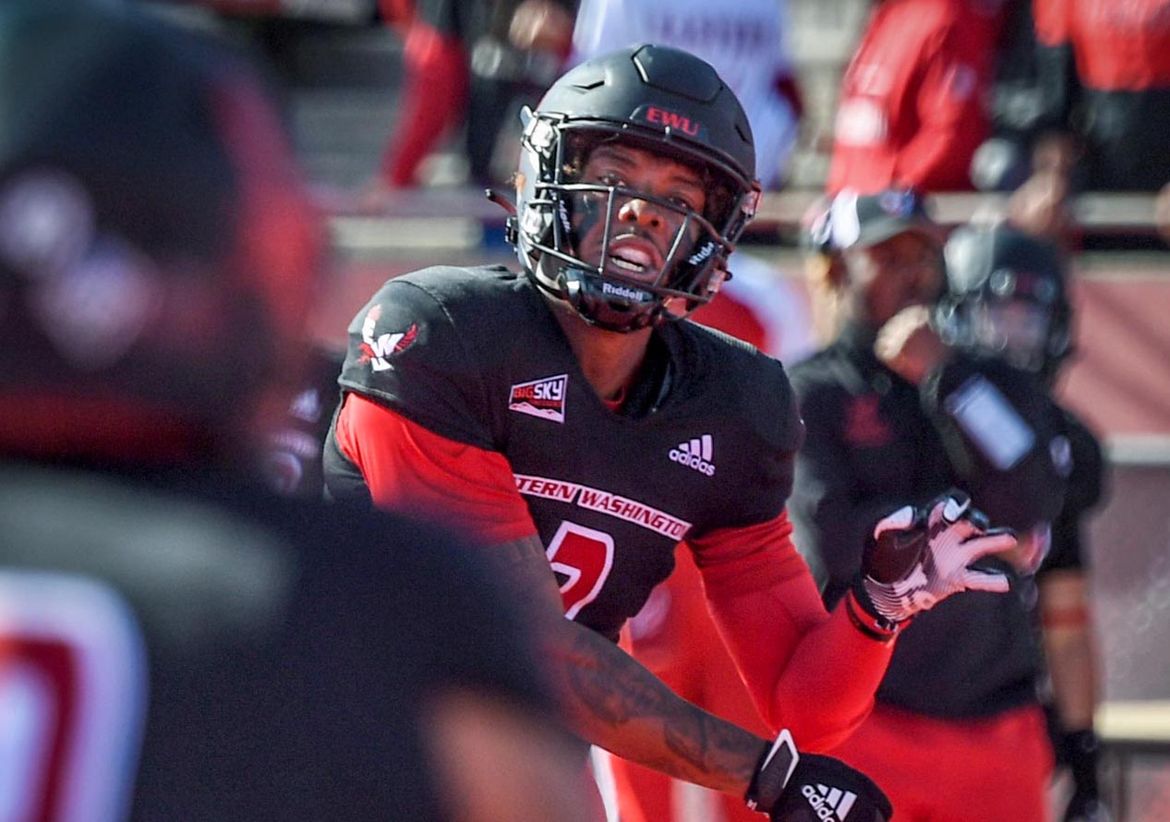 EWU: This is probably the least surprising award of the season. Eric Barriere threw for 600 yards, seven touchdown passes and ran for another to earn the FCS national offensive player of the week award. Dan Thompson has all the details. … Elsewhere in the Big Sky, Montana State will go into its bye week undefeated in conference play. Unless Idaho State can pull a huge upset. … Montana is about to face the make-or-break part of its season.

Preps: Mondays aren’t quiet in the high school ranks. Dave Nichols has a roundup of all the day’s action. 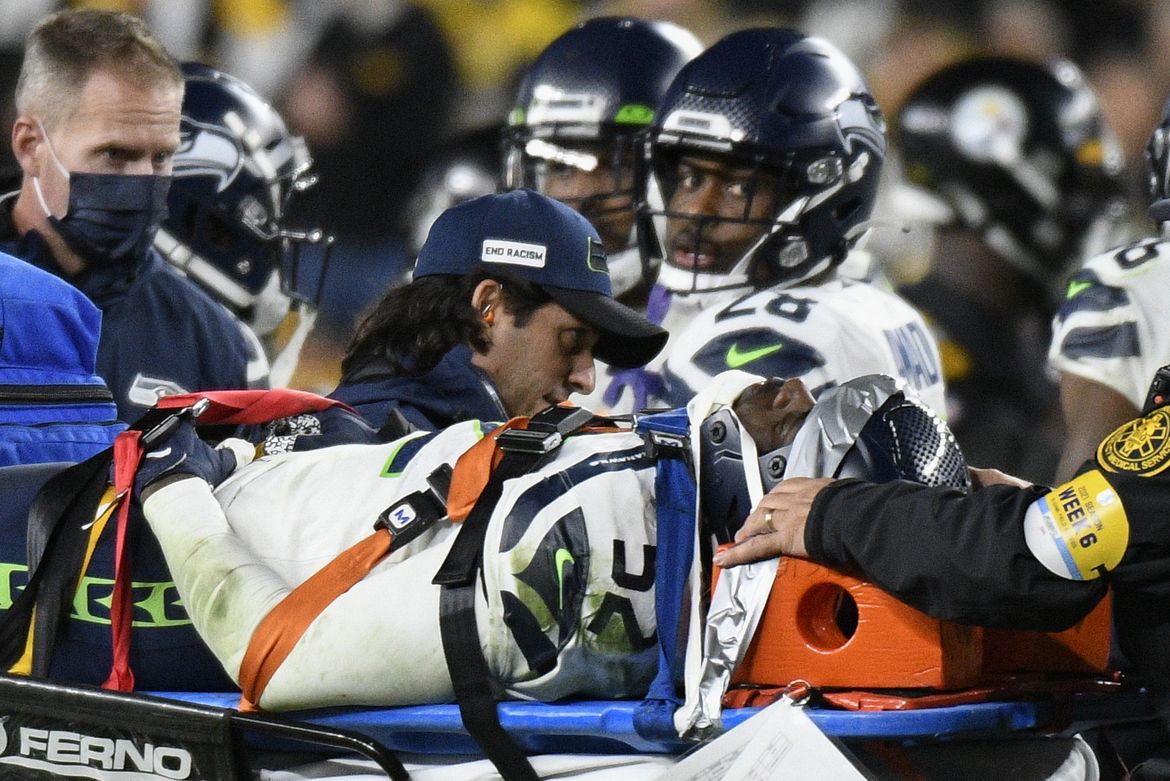 Seahawks: If you have questions about the Pittsburgh loss, here are some answers. … Geno Smith is better than many thought. Now, hold onto the ball. … Cam Newton? Not likely. … Thankfully, Darrell Taylor doesn’t have a significant injury after being carted off the field Sunday night. In fact, he may be able to play Monday night against New Orleans. … Jamal Adams hasn’t been a gamebreaker this season.

Mariners: No, the M’s should not trade Mitch Haniger. Instead, they should build around him. … Boston hit another grand slam. Ya, I know, that’s three in two games. The host Red Sox also blew out the Astros 12-3

Kraken: Speaking of blowouts, that happened to Seattle in Philadelphia last night.

• When Rolovich announced in July he hadn’t been vaccinated, we knew what happened Monday would come to pass some day. And said so. Not sure many employees in any occupation can tell their boss, roundabout or directly, they don’t know what they are talking about and not end up on the street someday. Especially when that boss actually does know what he’s talking about. Until later …