A GRIP ON SPORTS • Like the weather in Spokane today, the forecast is a bit cloudy in the area’s sports community. In most cases, it’s hard to figure out which way the wind is blowing.

• Just how will Washington State’s football team respond to the events of the past couple days? Will they use them for motivation and then use BYU as a chance to release their pent-up frustration? Or will they fall into an abyss and bottom out against the Cougars? 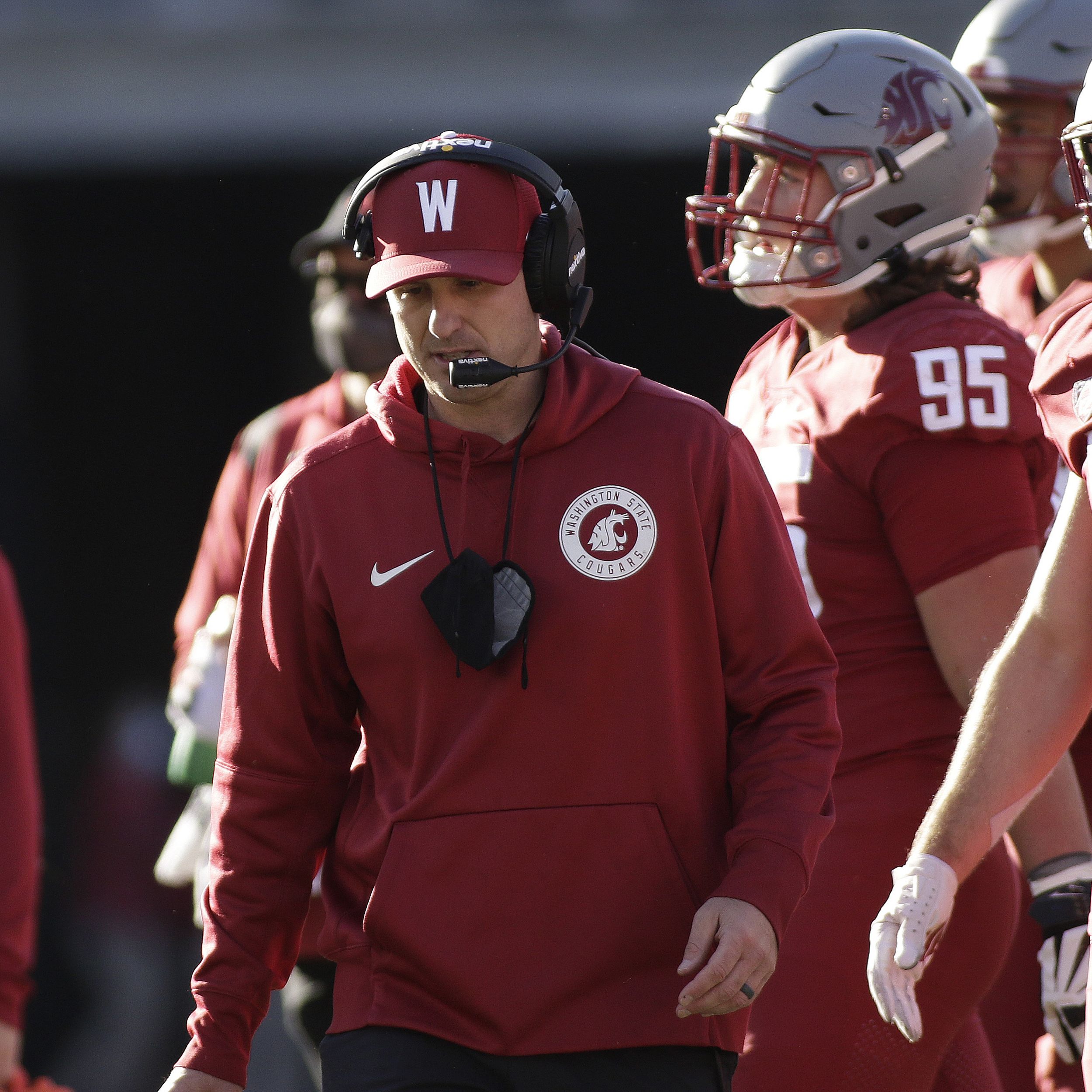 If Jake Dickert’s press conference yesterday – Dickert, flanked by athletic director Pat Chun and school president Kirk Schulz, was introduced as the interim coach – is similar to how he runs his meetings, they may just be fine. Though Dickert has never served as a head football coach, the 38-year-old former defensive coordinator showed a depth of understanding that belies his age. He seems to have a deep confidence in his three coaching foundations: faith, trust and belief. And he is certain his players will as well.

In other words, he doesn’t seem overwhelmed by the magnitude of the task ahead of him. And his calm demeanor should go a long way toward helping the Cougar players deal with the tasks ahead of them. 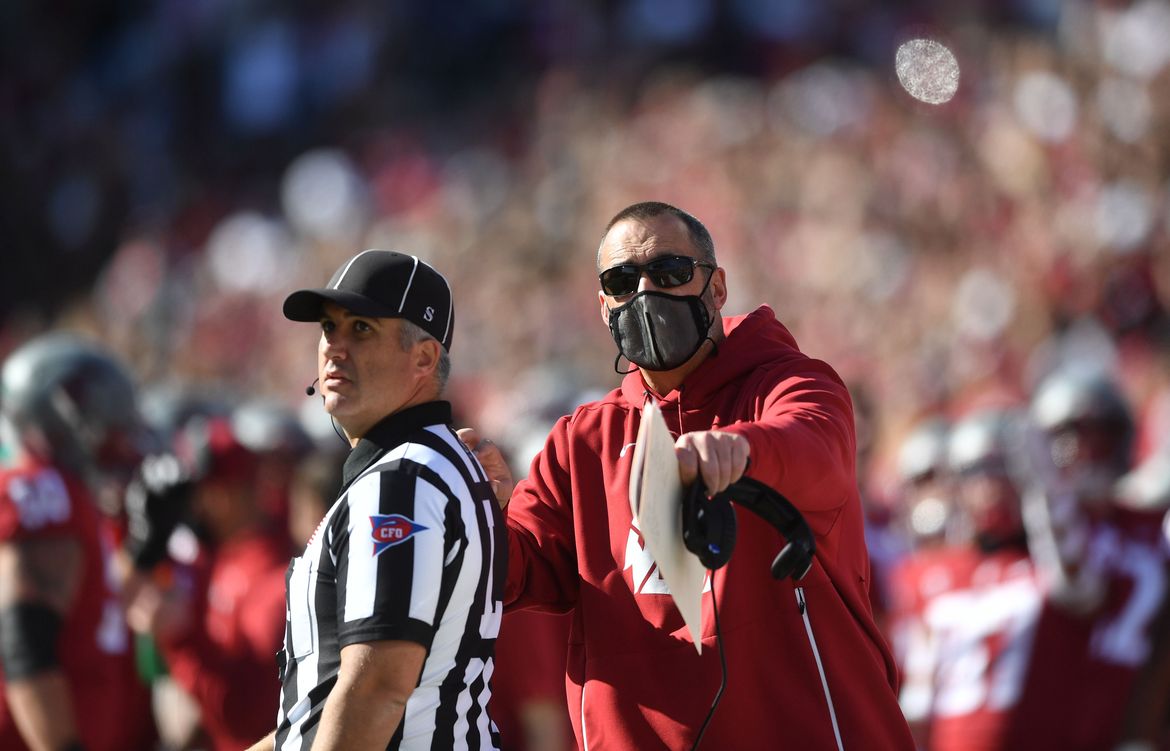 • The other shoe dropped this morning, albeit on Twitter and among those who cover football on the national level.

Attorney Brian Fahling, representing Nick Rolovich, announced this morning the former coach would be taking legal action against the school in the near future.

Rolovich is alleging Chun decided as far back as April to terminate the coach, had no intention of finding an accommodation, had him escorted off campus and attended some sort of secret donor meeting in July 2020 in which Chun and the donors contracted COVID-19.

The release also alleges “Coach Rolovich has been derided, demonized, and ultimately fired from his job, merely for being devout in his Catholic faith.”

Though legal action was expected it’s hard to divine how it will turn out. Always is. 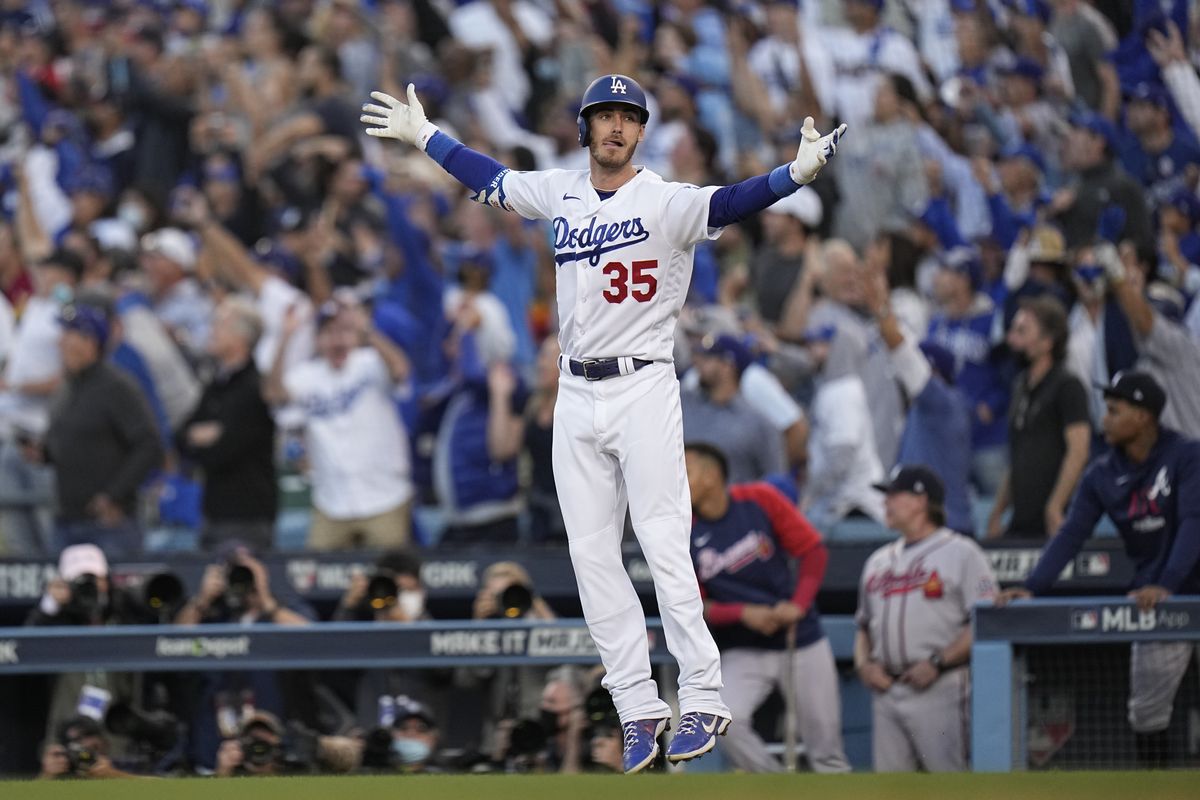 • Watching playoff baseball is hard. Trying to figure out how a single game, let alone a series, will end is impossible. Take yesterday for instance.

A missed strike three against Joc Pederson helped ignite an early Braves offensive explosion and made it seem as if Atlanta would take a commanding 3-0 lead in its series with Los Angeles. Then the most-unexpected rally in Dodger history occurred in the eighth inning and they won 6-5, keeping the seven-game series on serve.

Another missed strike, on a two-out, two-strike count to Jason Castro, led to a seven-run uprising in the top of the ninth and helped Houston even its series in Boston 2-2. Now the Astros have regained home-field advantage. And made both series coin flips.

• By the way, another reason why watching playoff baseball is hard? Games take forever. The Dodger game started in the early afternoon in L.A. and ended long after dinner. Heck, after desert. The official time? Four hours and 14 minutes. 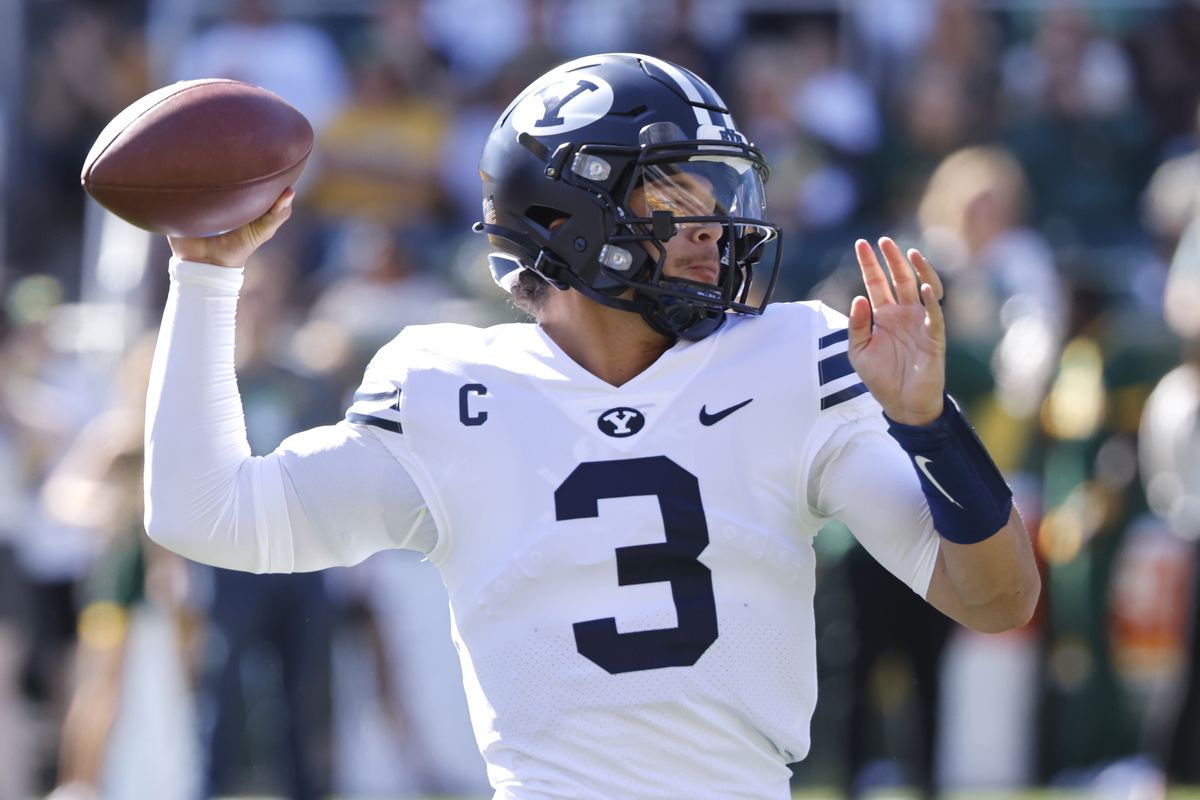 WSU: Dickert’s virtual press conference leads off our Cougar coverage today, with Colton Clark covering the nuts and bolts. … John Blanchette has his thoughts in this column. … What does the future hold for Washington State football? In the short term, there is the game with BYU on Saturday, covered here by Colton’s first look. In the long term there are harder-to answer questions, though Theo Lawson tries in this commentary. … Colton also took some time yesterday to visit with Larry Weir on the latest Press Box podcast. … Others from around the region weigh in, including Larry Stone in the Times, John Canzano in the Oregonian and WSU alum Michael-Shawn Dugar in The Athletic. … Christian Caple summarizes the past few days. … Jon Wilner throws out same replacement names in the Mercury News. … BYU is beat up heading to Pullman and hasn’t played as physical recently. … Elsewhere in the Pac-12 and college football, Game Day is returning to the conference, setting up camp on UCLA’s campus. Besides that info, Wilner also revamps his bowl projections. … Even in tough times, Washington has seen a receiver rise to the top. … Oregon State hosts Utah this Saturday in one of the more anticipated home games in years. … Oregon is getting healthy at just the right time. The Rose Bowl showdown with UCLA looms. … The Ducks are going to build a new indoor facility. Their old one is pretty nice. … After last week’s showing, Colorado hopes the offense has turned a corner. … Which is the better opening, LSU or USC? … Will the Trojans have Jaxson Dart against Notre Dame? … Arizona State still has a path to a South title. It’s pretty narrow, however. … Arizona has improved in some areas. … In basketball news, Colorado is pretty young this season. … Utah is not having a fan event this season. 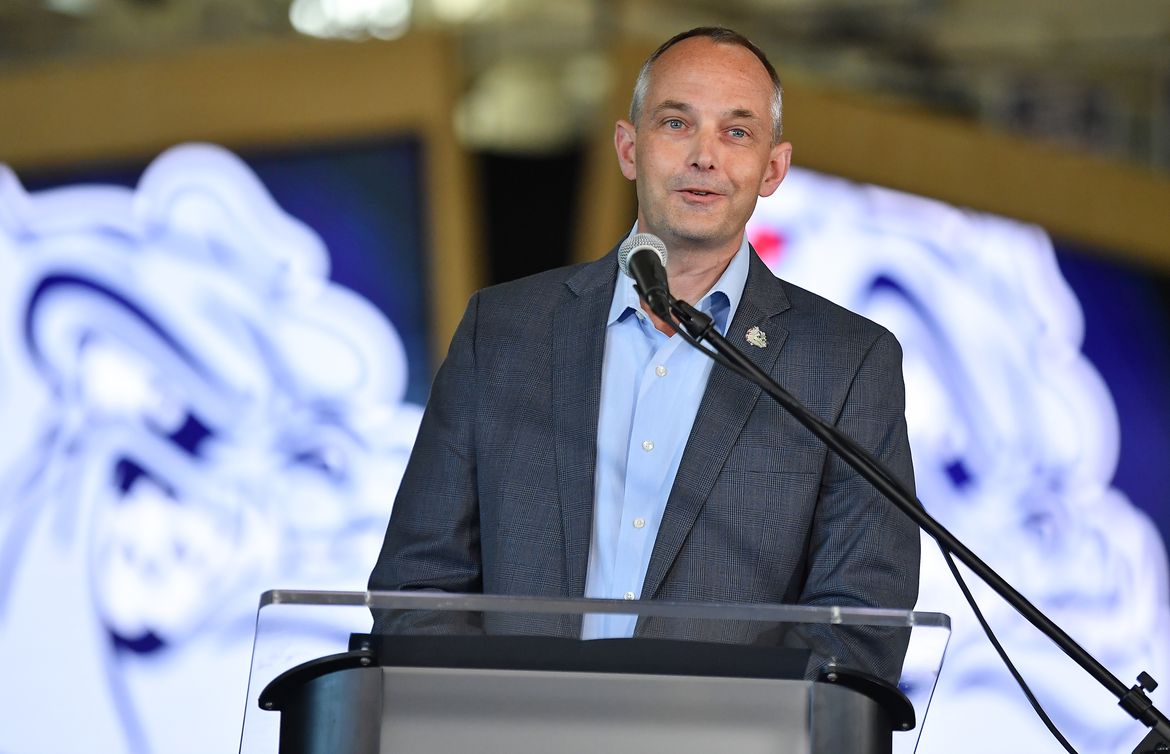 Gonzaga: We wonder if Chris Standiford ever thinks about Gene Bartow. Poor Gene had to replace John Wooden at UCLA. Standiford may have a tougher task, replacing Mike Roth at Gonzaga. Jim Meehan talked with the new GU athletic director for this Q&A. … Hunter Salis, the freshman guard from Nebraska, is on the Jerry West preseason watch list. Jim has more in this piece. … The women’s basketball team did not receive a single vote in the preseason AP poll. Jim Allen has a story.

EWU: Around the Big Sky, Montana is happy one offensive lineman transferred from Washington State. … Northern Colorado is dealing with some COVID-19 issues. … UC Davis is back in the top 10 of the polls. … Northern Arizona heads to Sacramento State. … In basketball news, Idaho State will hold a fan event Friday.

Chiefs: There is some hockey news though none of it a Spokane fan would term good. The Chiefs lost 5-3 to Seattle last night. Jason Shoot has that story. And the team announced Reed Jacobson broke his leg Saturday night in Tri-Cities. Angela Schneider has that covered. 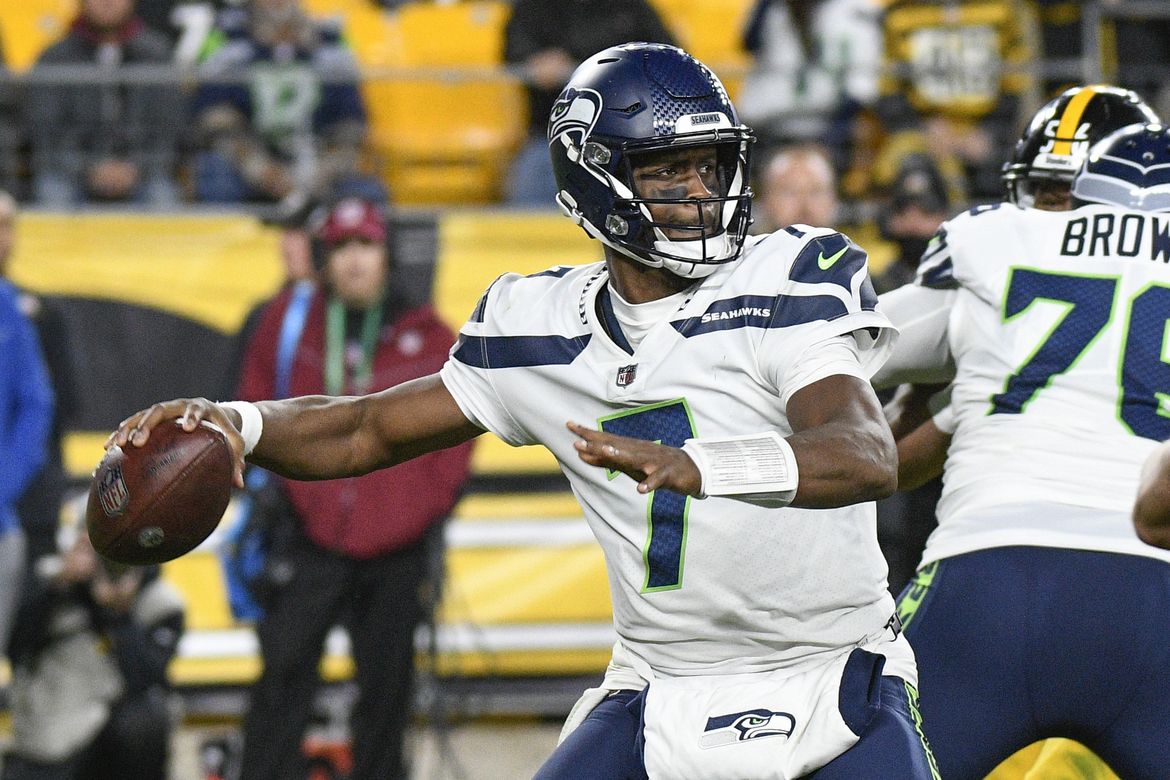 Seahawks: Don’t completely rule the playoffs out for Seattle. The Hawks have started 2-4 before and made it. … A Twitter spat. Just what the Seahawks need right now.

Mariners: As we mentioned above, Houston scored seven in the top of the ninth to defeat Boston 9-2 and Cody Bellinger ignited Los Angeles’ rally in a 6-5 win over visiting Atlanta.

Kraken: Seattle is headed home. The Kraken lost 4-2 in New Jersey but now head back west to begin a long homestand in the renovated Climate Pledge Arena where they should have more of a fighting chance.

Sounders: Good news. Nico Lodeiro is getting closer to playing.

• Walking around the backyard this morning, we glanced up to the clouds hopefully. Rain is needed. We had our sprinklers blown out last week and we could sure use some moisture on the lawn, especially under the spreading maple trees. The grass is really dry and soon will be covered in a layer for leaves. Hopefully it will rain today and we can apply some fall fertilizer. Until later …