A GRIP ON SPORTS • What’s on your schedule for the weekend? If you haven’t quite figured it out yet, we can help. Hey, it’s what we do.

• If we were to rank sporting events to watch this weekend as something wet falls from the sky – it’s been so long, seemingly, since we’ve had day-after-day precipitation, we’ve kind of forgotten what to call it ­– we can help. Here’s our top five. 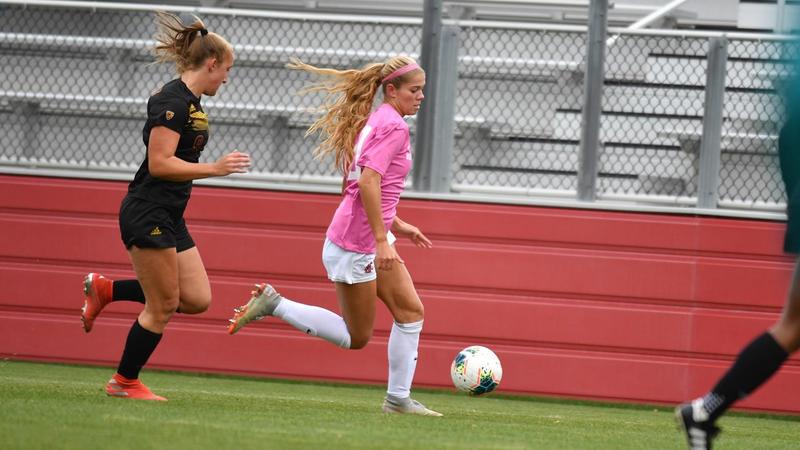 5. We had a bunch of options here, though one fewer than we would have thought. The Kraken’s home opener is tomorrow night but for some reason it is not available on Root Sports, who announced with fanfare earlier this year it had signed the new franchise to a television deal. But the game is only available on the ESPN+ streaming service, which is a tad tougher for most of you to access.

Instead, we will highlight something we don’t usually do, and point you in a direction that is hard to find. We are intrigued by Washington State’s home soccer match with UCLA on Sunday night at 5.

Yep, not an NFL game. (Though San Francisco is hosting Indianapolis on NBC which would be fun except, you know, Indy. Heck, the Colts lost to the Seahawks. By the way, the Hawks are out of the running because they host New Orleans on Monday night.)

WSU is trying to earn the right to make another deep NCAA run but first the unranked Cougars will have to get there. After dominating but only drawing with fifth-ranked USC on Thursday night, Washington State could sure use a statement win over the eighth-ranked Bruins. The match is on the Pac-12 Network. 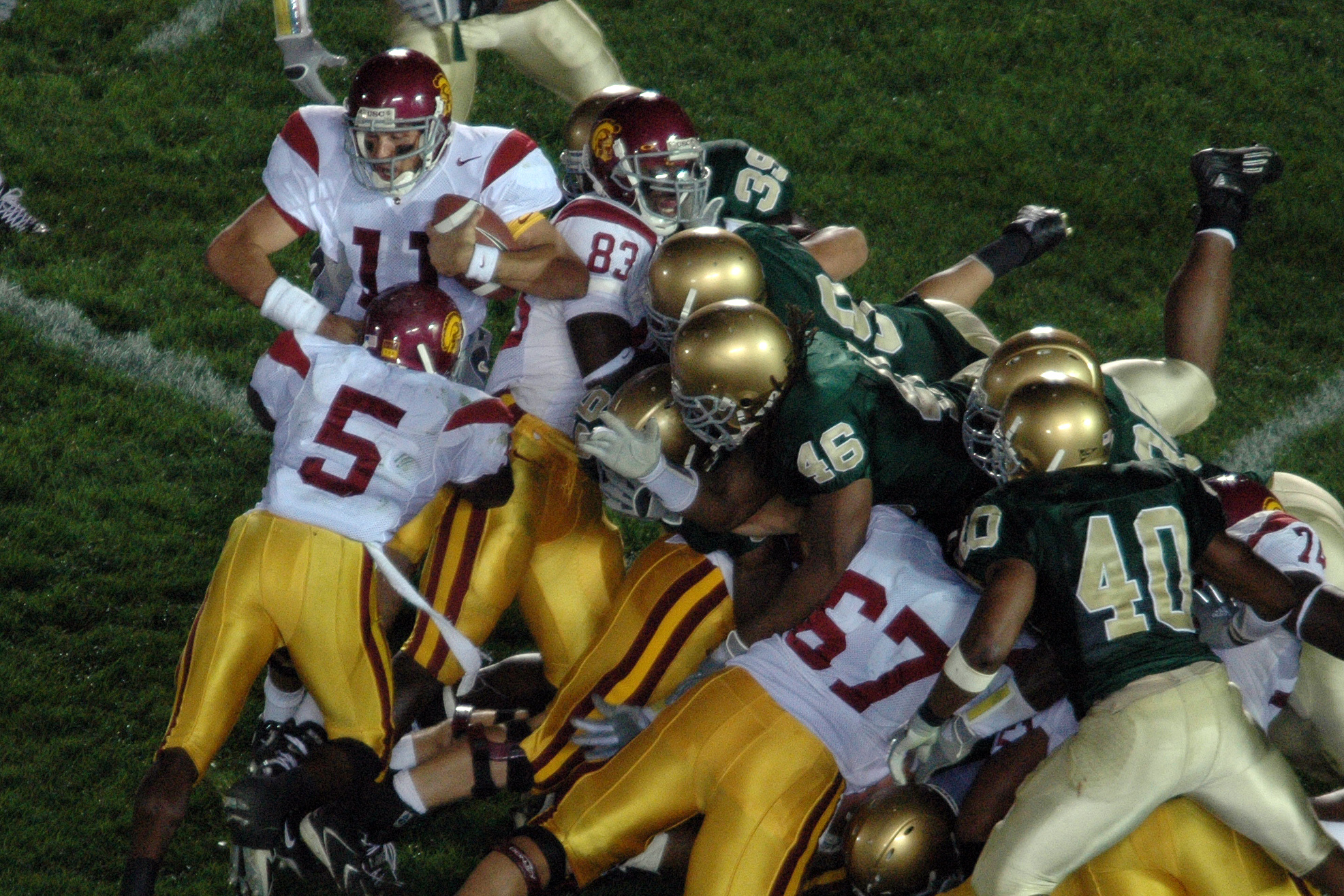 4. The next viewing opportunity we will point out seems more about the tradition than competition. After all, USC is in the middle of another mediocre season that cost Clay Helton his job. But USC at Notre Dame is about as good as college football gets even if the outcome doesn’t matter to the average viewer. The pageantry. South Bend. Green and gold. Whatever that red is USC favors. (We know it’s cardinal, we are being sarcastic.) There isn’t a better intersectional rivalry than this.

We expect the Irish to jump ahead early, Kedon Slovis to be replaced by Jaxson Dart, the Trojans rally and pull away for the upset. You know, just like USC did against its Pacific Northwest rival, Washington State.

3. The middle of Saturday is crowded. Multiple TVs may be needed. Our top-rated weekend contest is on as is Oregon at UCLA, undefeated Oklahoma State at Iowa State, LSU at Mississippi and our third-rated event: Weber State at Eastern Washington.

What, you thought we wouldn’t watch the best FBS quarterback in the nation face his biggest challenge since Montana came to town? No way. Weber State’s record isn’t all that good but the Wildcats, the multiple-time defending Big Sky champs, can still play defense.

And we all know Eric Barriere can sling it. So this one is more about that matchup than anything else. You can watch on SWX starting at 1 p.m. 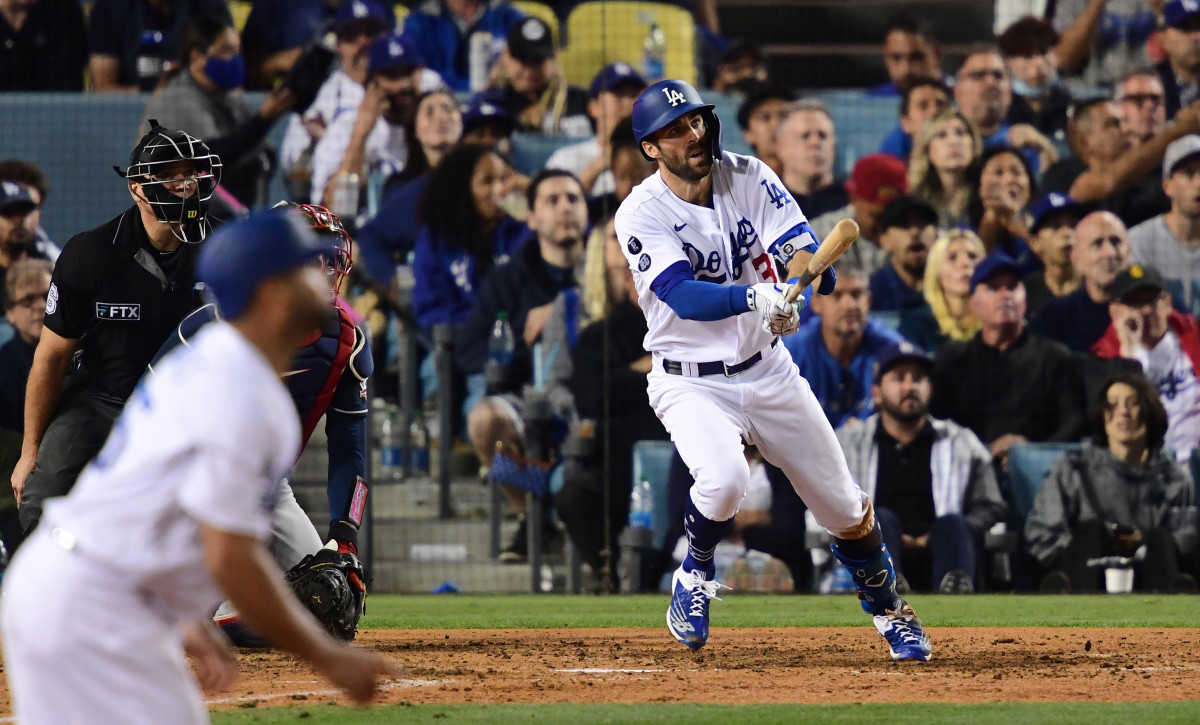 2. There are two opportunities here. Maybe. The Dodgers and Braves meet Saturday at 2 for sure. Game Six in the National League title series begins then. If the Braves win, there is nothing Sunday. If the Dodgers win, the teams meet again at 4:30 with a trip to the World Series on the line. The way this series has gone, two games would be better. And more fun.

1. How could it be anything else? BYU visits Pullman on Saturday afternoon (12:30 on FS1). That’s not just why the game is must-watch. How will the Cougars play in a week in which head coach Nick Rolovich and four assistants were shown the door after refusing to follow the state’s COVID-19 vaccination mandate? 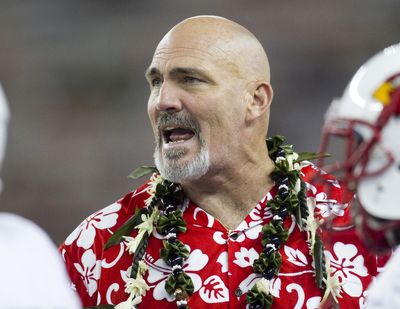 WSU: It looks as if the Cougars have identified at least a couple assistants to help Jake Dickert rebuild the staff the rest of the year. Colton Clark has that story. … Jon Wilner explains why Washington State shouldn’t worry about losing the planned lawsuit from Rolovich. … BYU may be struggling a bit but the Cougars have weapons on both sides of the ball. They also have two University High grads playing for them, the Barrington brothers. … Elsewhere in the Pac-12 and college football, we linked this yesterday but Wilner’s midseason report is on the S-R website this morning, so your subscription will allow you to read it. … He also looks at coach’s salaries and previews the weekend in the Mercury News. … John Canzano talked with Pac-12 commissioner George Kliavkoff yesterday. … We almost pointed you toward watching Washington’s trip to Tucson tonight. There is a car wreck aspect of it, what with the Huskies struggling and Arizona struggling more than any Power 5 school in America. The Wildcats may have some surprises for UW. … Oregon won’t be surprised if UCLA tries to run the ball down its throat. But the Ducks may have the perfect answer for that. … Oregon State has a run-first attitude. The Beavers, sensing an opportunity, will have to figure out a way to deal with Utah’s Devin Lloyd. … It might be a different looking USC team that takes the turf against Notre Dame. We do know the Trojans will look different next season. … Arizona State could still win the South. … Really, the most boring matchup of the weekend is in Berkeley, where California will host Colorado. The Buffs are coming off a win at least. … In basketball news, competition is fueling Oregon State as it readies for the season. … Oregon has a key player coming off injury. … Finally, women are cashing in on their NIL opportunities. 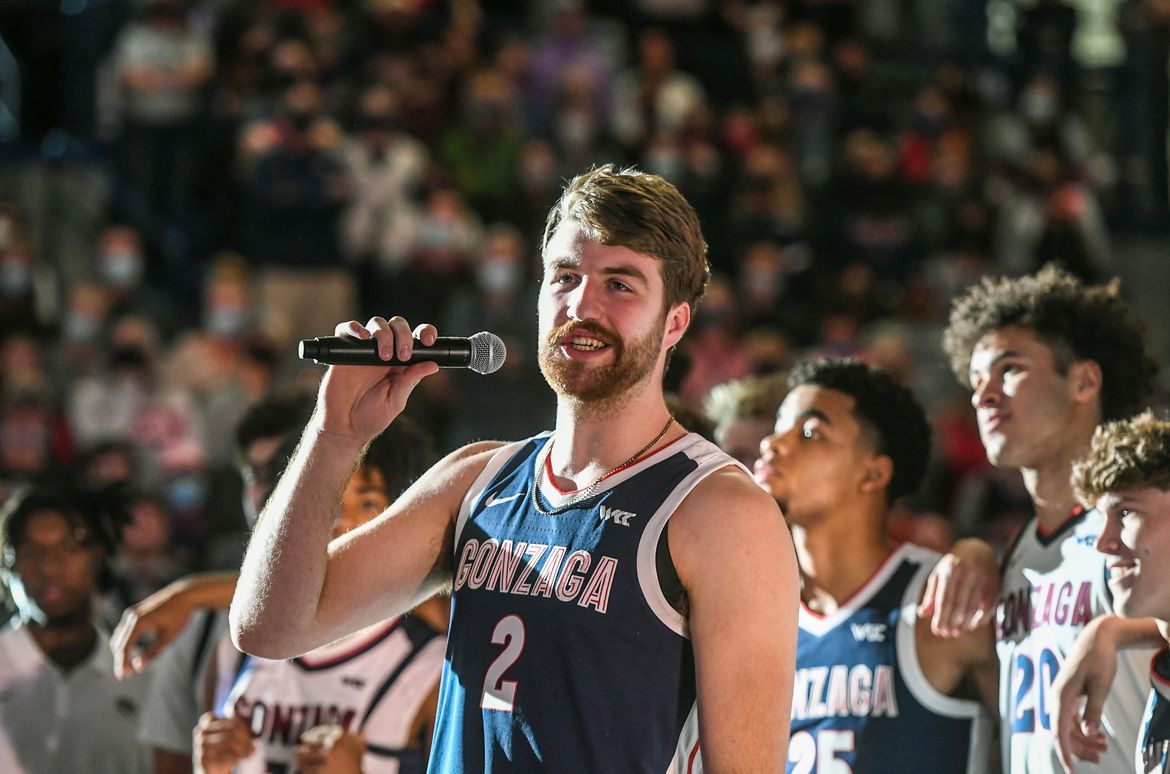 Gonzaga: Drew Timme has a chance to do something no one has ever done, win the Karl Malone Award two-years running. Theo Lawson has a story on Timme once again making the award’s watch list. … Chet Holmgren is going to be making some money. The freshman forward, who has yet to play a college minute, signed with a big-time agency this week. Theo has that story as well. … Around the WCC, BYU wants to win a conference title before it leaves the conference. 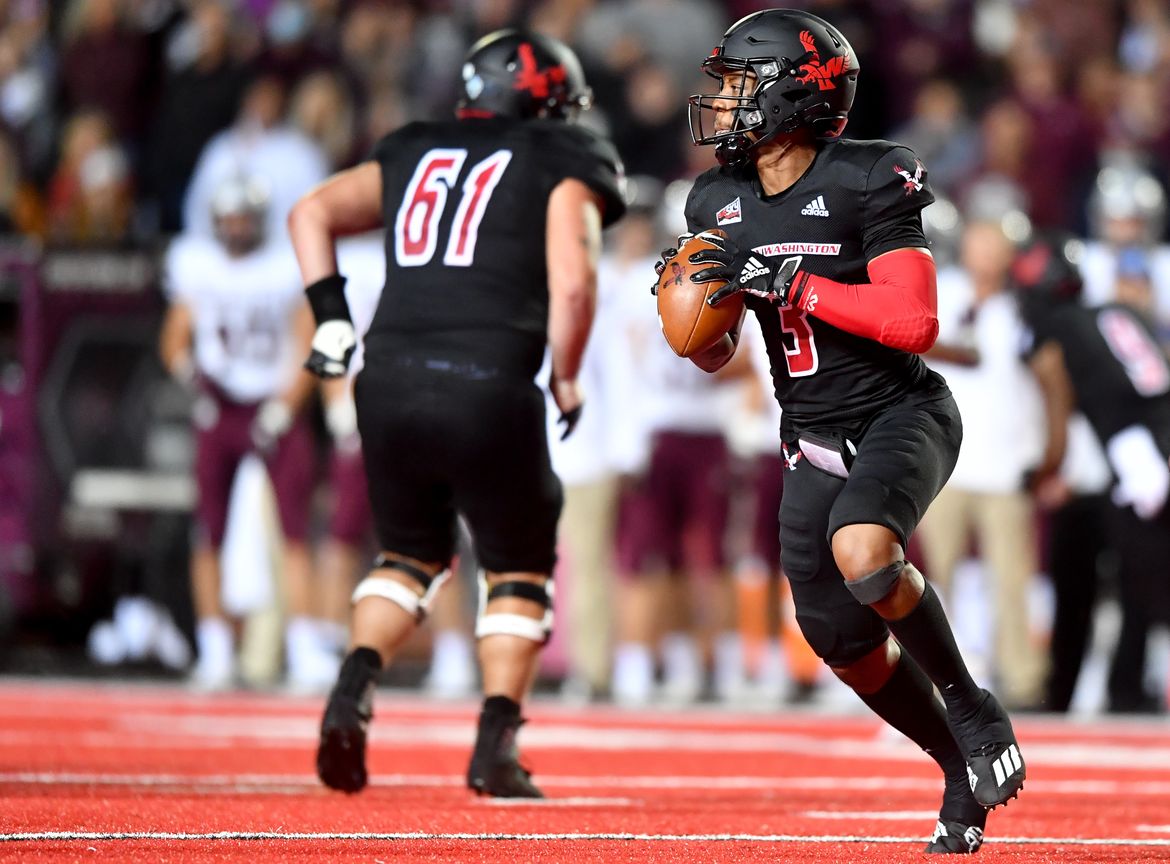 EWU: We’ve already tooted Barriere’s horn above. Dan Thompson delves into the senior quarterback’s talent in this story. … Eastern, like many schools, has a financial issue with the athletic department. The school has decided it’s not because it is overspending but because it doesn’t bring in enough revenue. Greg Mason covered a Board of Trustees meeting yesterday in which the revenue shortfall was discussed. … Larry Weir delved into FCS football on latest Press Box podcast, talking with Craig Haley. … The Big Sky released the basketball polls yesterday and Eastern isn’t expected to repeat last season’s success. Dan looks at the poll results. … Elsewhere in the Big Sky, UC Davis travels to in-state rival Cal Poly this week. … Montana State had trouble penetrating Weber’s defense last week. … In basketball, Southern Utah was picked to win, but Weber State and Montana were not far behind. … On the women’s side, Idaho State was picked to repeat. … Northern Colorado is middle of the pack in both.

Idaho: The Vandals were destroyed in Cheney last week. But the season doesn’t stop. It rolls on. This week they host Montana, another of the conference’s upper-division teams. Peter Harriman has a preview.

Whitworth: A victory Saturday over visiting Willamette will clinch the longest streak of continued excellence in the Pirates’ history.

Preps: Dave Nichols headed out to Union Stadium last night and covered Mt. Spokane’s 38-13 win over University. … Dave also has a roundup of other prep action from Thursday.

Chiefs: Spokane had an overabundance of goalkeepers. Until yesterday, when the Chiefs traded Campbell Arnold to the Victoria Royals. Dan Thompson has more in this story. 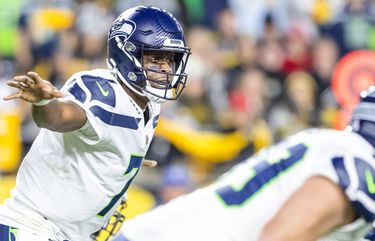 Seahawks: Russell Wilson is getting better, which is to be expected. No one knows, however, when he’ll be back but Pete Carroll is optimistic it will be soon. … A couple of injured players, including Rashaad Penny, returned to practice. … Jamal Adams doesn’t give a darn if you aren’t satisfied with how he is playing.

Mariners: Before we get to the playoff results we want to direct you to Larry Stone’s column about the length of postseason games. He’s right. … The Dodgers stayed alive as former Mariner Chris Taylor hit three home runs in an 11-2 victory over Atlanta.

Kraken: We had a few stories yesterday about the new-look Climate Pledge Arena. We can add a couple more today, including thoughts from Art Thiel. … We also have a story on how they want to play.

Sounders: Seattle wants to host World Cup matches. It should. And the Sounders have a plan to make that happen.

• Some sort of atmospheric river is supposed to hit us today. And flow through the area for the next few days. We’ve never minded rain. Except we have a young dog we are trying to house train and he doesn’t like it at all. Challenge accepted. What choice do I have? Put diapers on him? Until later …