A GRIP ON SPORTS • There are more eyes than usual on Pullman this morning, mainly because the Cougar football program is under new management. But what if the best reason to be watching the battle of the Cougars is it will be a hard-fought, entertaining game? That’s our story and we’re sticking to it.

• The local schools that play the game all have interesting matchups today, including a clash in Cheney of programs that emphasize opposing sides of the football. But Washington State’s battle against BYU this afternoon has way-too-many storylines to ignore. 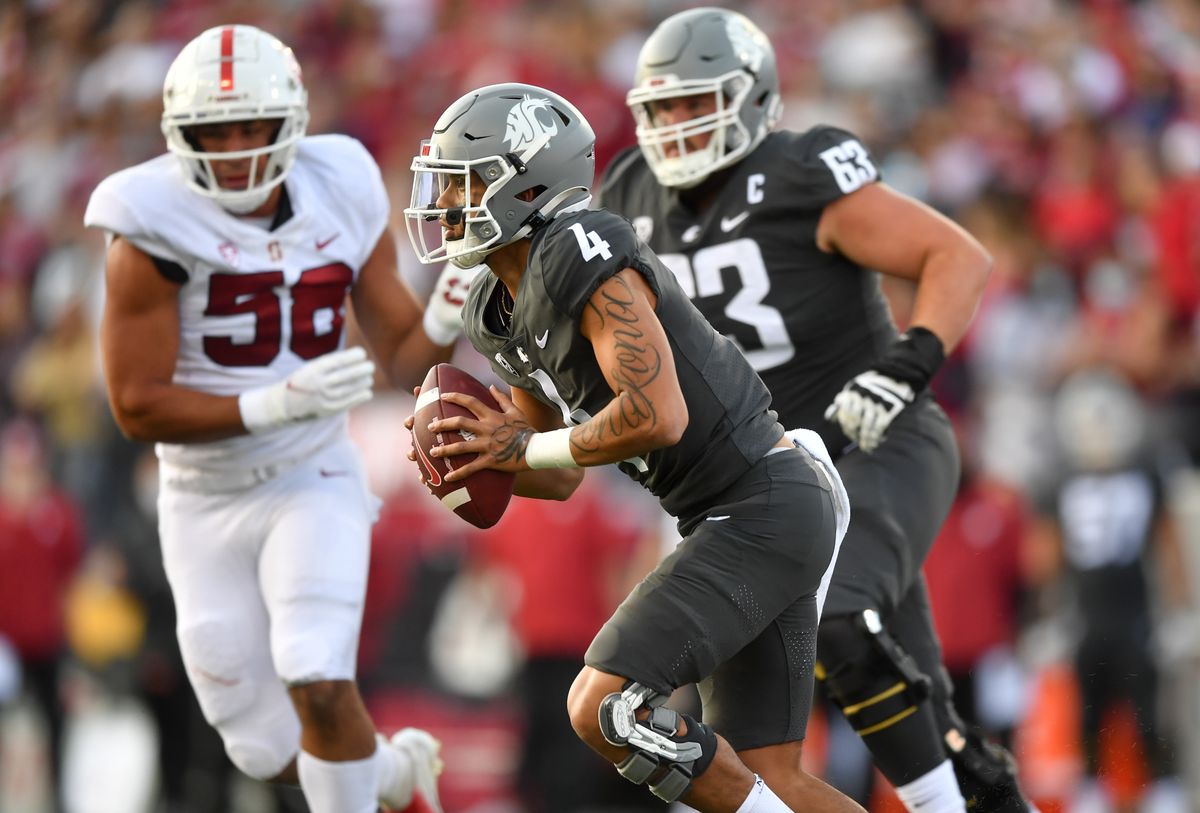 We start, of course, with Jake Dickert taking over WSU’s reins. The 38-year-old Dickert has never been a head coach before but thanks to Nick Rolovich’s recalcitrance concerning the COVID-19 vaccine, Dickert has been thrust into the role, if only in the interim. Now the former defensive coordinator has to worry about both sides of the ball and all the flotsam and jetsam related to running a game.

Go for it on fourth down? That will be Dickert’s decision. Call time out? Dickert will decide. Time for a two-point conversion, coach? Yep, we’re asking you Jake.

How fun. And probably terrifying.

You think he got a lot of sleep last night at the team hotel?

But that’s only part of the intrigue, even if it’s a lot more than the 1 percent Dickert professes it is. The rest revolves around the players who he will be leading.

Can the offense continue to function at a high level? The last two games the Cougars have been spot on. And that corresponds directly with the emergence of former quarterback coach Craig Stutzmann as the play caller. Now offensive coordinator Brian Smith takes back that role. How will quarterback Jayden de Laura and the offense respond to the change?

On the other side of the ball, Dickert should still have a heavy hand, though his focus won’t be as locked in. How could it be? The principles, however, should remain the same, so expect to see 11 players still flying around on each snap. 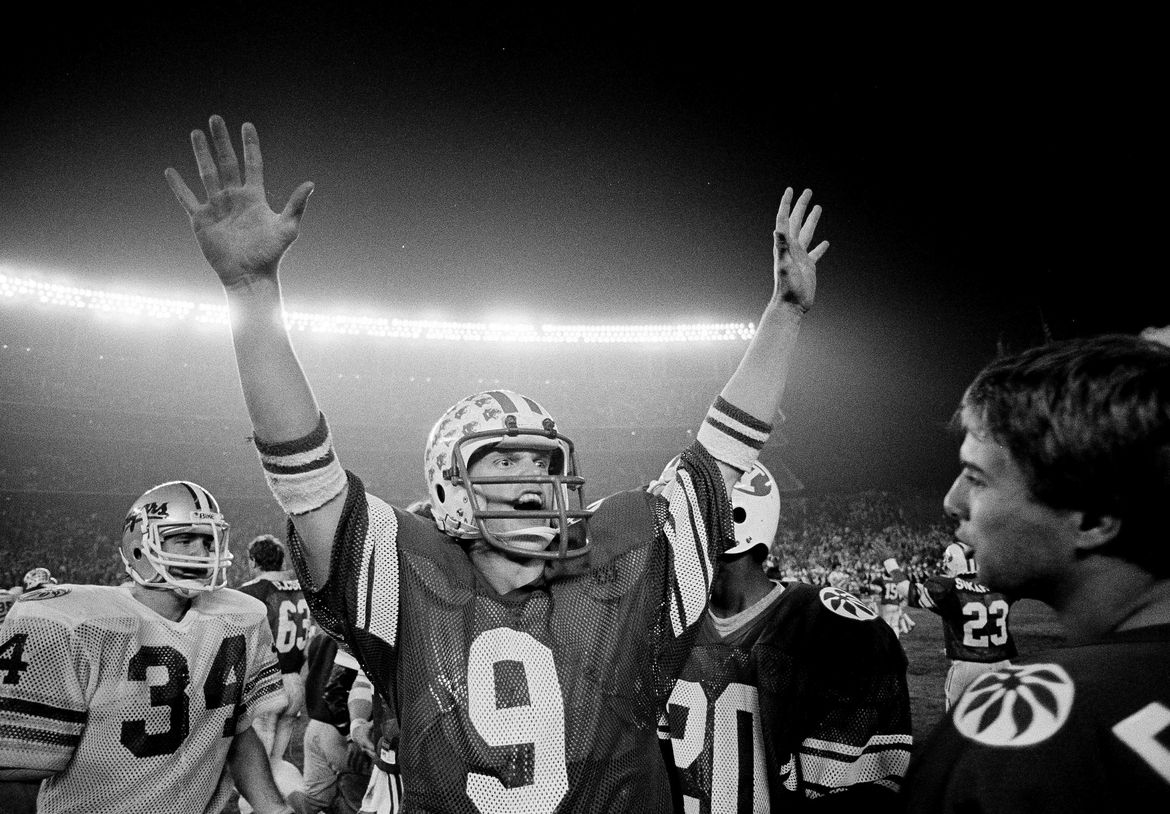 What is unknown, however, is how all this will interact with the opponent. It’s rare, recently, for Washington State to play a nonconference game in the middle of the Pac-12 season. The usual M.O. is to play three in the first three weeks and then spend the remainder of the year matching up with teams you have some sense of history with. Throwing an opponent in midseason that you last played in 2012 doesn’t promote a lot of familiarity. Even if Rolovich were still around, the Cougars would have been challenged to prepare for an opponent that is something of an unknown.

And BYU? The beat-up Cougars from Utah need a win. Badly. After a spotless first five games (and a top 25 ranking), they were upset at home by a scuffling Boise State team and then were schooled last week by future Big 12 opponent Baylor. A two-game losing streak doesn’t make anyone in Provo happy. But just imagine how loud the murmuring will get if it reaches three against a program any outsider would term in disarray.

So expect a battle of wills today. One that any odd occurrence could tip toward either team. Which team is mentally tougher? We should know by 4 p.m.

• It’s too bad the Cougar game isn’t part of the after-dark portion of the Pac-12 schedule. (I know, it’s hard for me to believe I would say that either.) That would have freed up the middle of the day for Eastern Washington and Weber State, at least in many Spokane-area households.

Though the Wildcats from Ogden, Utah, are just 2-4, they have one of the Big Sky’s finer defenses and a legacy built by winning at least a share of the conference title the past four years. Despite the subpar record (or maybe because of it), they should be a tough out.

And Eastern, which has ascended all the way to the second spot in the FCS polls, can’t afford a letdown if it wants to continue an undefeated march to the postseason.

There is one really cool aspect of football. No matter how well you are playing, you have to prove it on the field every week. No one just rolls over and gives you a win. Especially not a program with the pride – and defense – of Weber State. 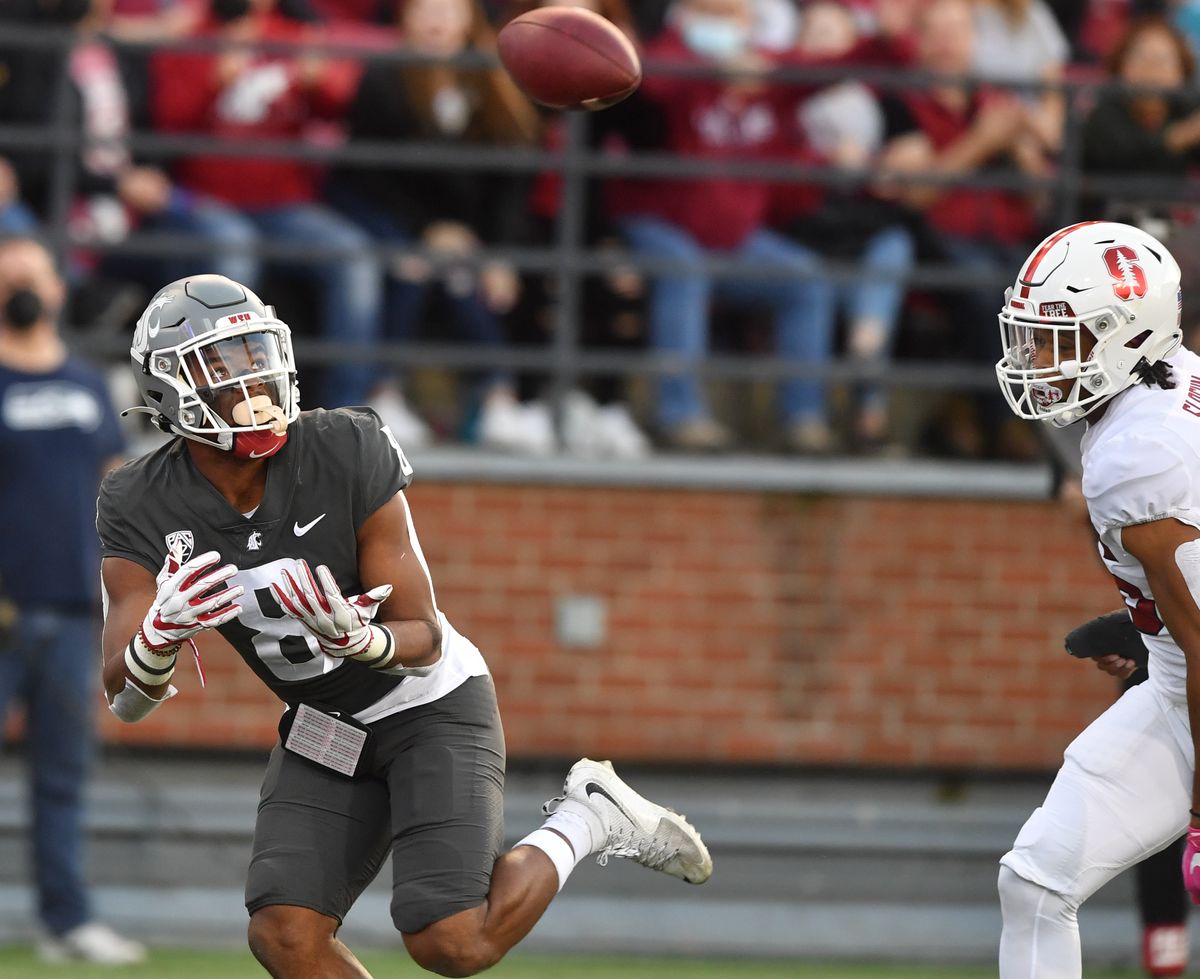 WSU: Man, there is a lot to share from Pullman. We start with Colton Clark’s preview of the game. And then we throw in his two-minute drill and his pick, which makes it clear he thinks the Cougars will win. (Which ones? You’ll have to read it to find out. Sorry.) … Colton has a story on the assistant coaches Washington State has hired to replace the four who were let go with Rolovich. … One of those fired assistants is joining his former boss in suing the school. Greg Mason has that story. … The athletic department announced a whole bunch of donations this week. Whether they came in due to the coaching change or they were in the works for months or years, we don’t know. We do know Laurel Demkovich has more information in this piece. … This game means a lot for BYU as the Cougars try to ensure a decent bowl spot. And prepares to enter a Power 5 conference down the road. … Elsewhere in the Pac-12 and college football, Jon Wilner has a stock report in the Mercury News. … There was one conference game last night and for three quarters it looked as if Washington was going to lose. And that Jimmy Lake might have been wary of stepping off the plane onto the Seattle tarmac. Instead, a defensive lineman came up with a key fourth-quarter interception and the Huskies avoided an ignominious loss at Arizona. The Wildcats’ losing streak hit 19 consecutive games, currently unmatched in college football. … California’s losing streak hasn’t reached anywhere near that but the Bears can’t afford any more losses. Especially when the opponent is as troubled as Colorado has been this season. The Buffaloes are coming off a big win. … The best game of the day may be in Pasadena, where Oregon faces a UCLA team coached by its ex-boss, Chip Kelly. The Ducks are getting healthy, something needed against a Bruin squad that has been pushing teams around. … USC and Notre Dame renew their rivalry in South Bend, where the trees are turning colors and the Trojans hope to give their interim coach something to remember. … Wait, we almost forgot the battle between schools leading the North and South divisions. Oregon State’s last game was a loss in Pullman. Utah took control of the South with a win over Arizona State. Who will prevail today? … Speaking of the Sun Devils, just what the heck is going on in Tempe? 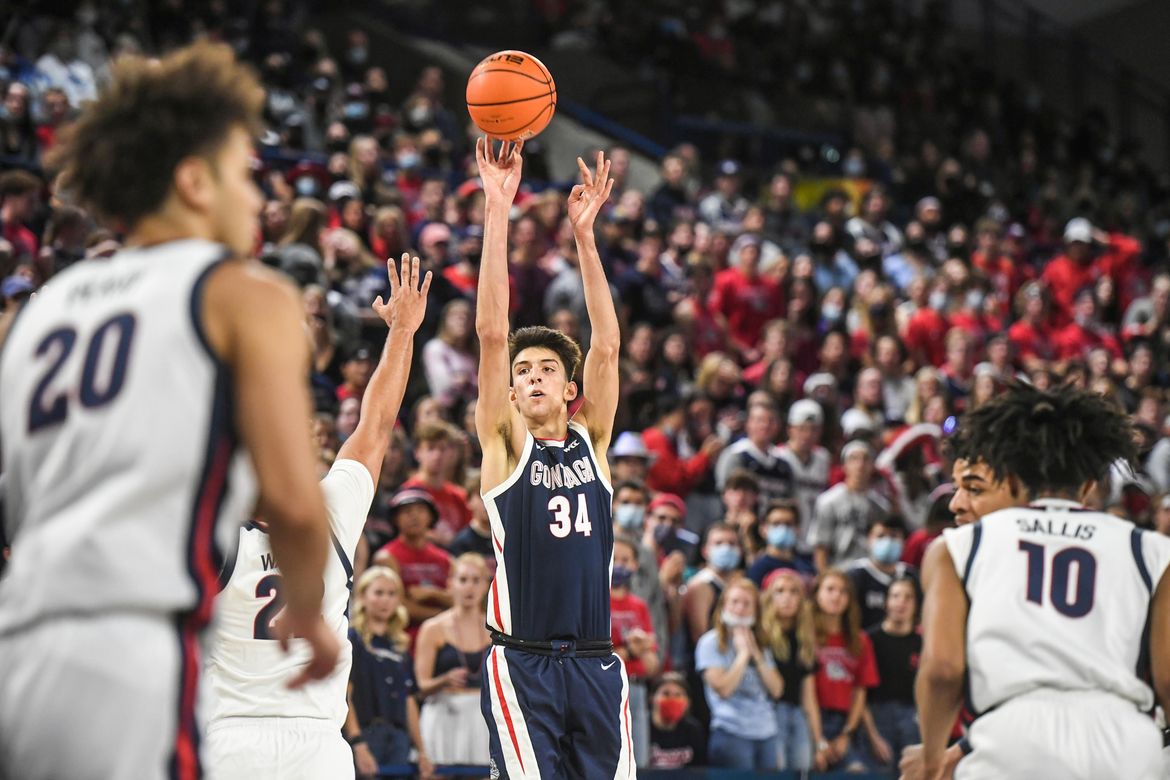 Gonzaga: Freshman Chet Holmgren has the height of a center, hence his nomination for the Kareem Abdul-Jabbar Award, something Theo Lawson covers here. But Holmgren is actually better suited to be a wing on offense, which makes the watch list inclusion fun. … Larry Weir delves into the Zags with Steven Karr on the latest Press Box podcast. … Around the WCC, the BYU Cougars are focusing on having fun.

EWU: The Eagles are always fun to watch. Dan Thompson tells you what to focus on this week against the Wildcats. … Elsewhere in the Big Sky, Sacramento State and Northern Arizona match up today. … Idaho State travels to Montana State to take on the Bobcats. … A depleted Northern Colorado squad makes the trip to Cedar City to face Southern Utah. … In basketball news, one of the games between Montana and Montana State will be on ESPNU.

Idaho: The Vandals host Montana today in the renewal of one the best rivalries from the old days of the Big Sky. Peter Harriman lets you know what to watch. 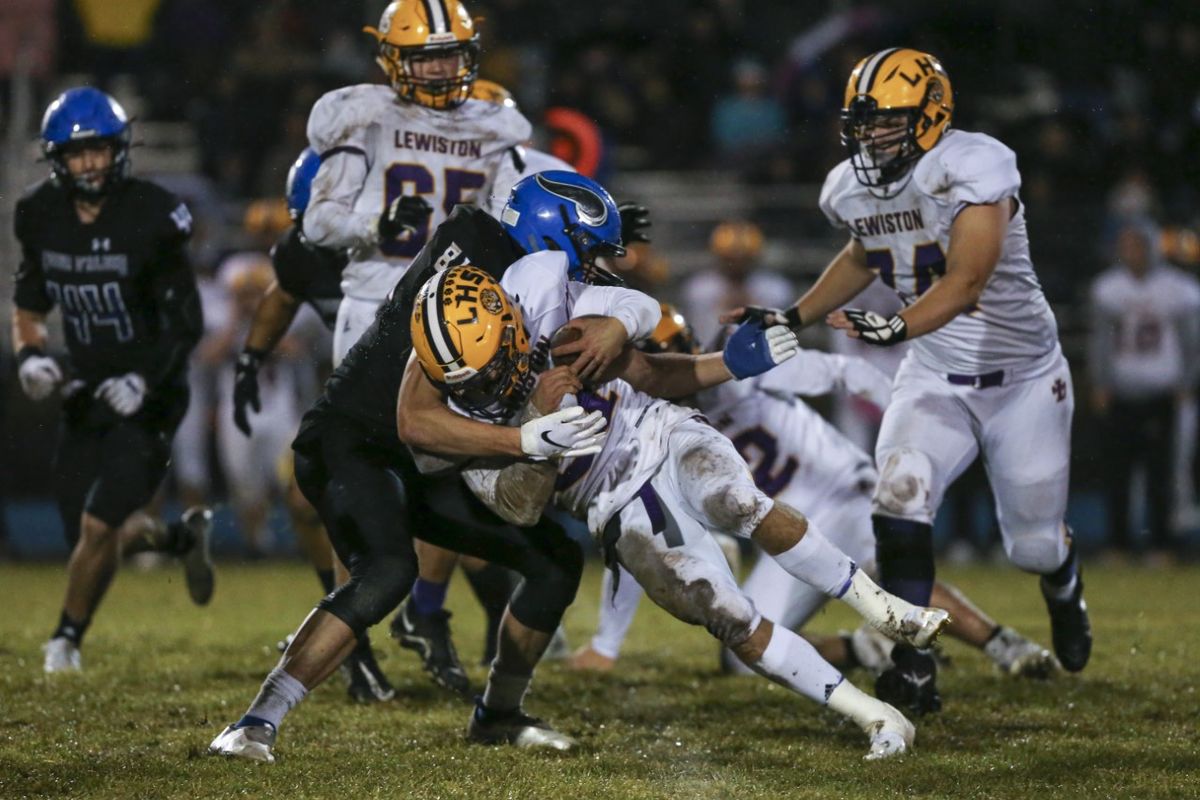 Preps: There is a three-way tie atop the Inland Empire League 5A football standings. Dave Nichols was at Coeur d’Alene last night for the Viks’ 38-7 win over Lewiston that ensured that result. … Dave also has a roundup of other action around the area. … Steve Christilaw covered West Valley’s win over visiting Clarkston.

Seahawks: Jacob Eason didn’t do well in Indianapolis. Now he gets another chance in Seattle. … Rashaad Penny is healthy again after a series of injuries that has challenged his ability to persevere. 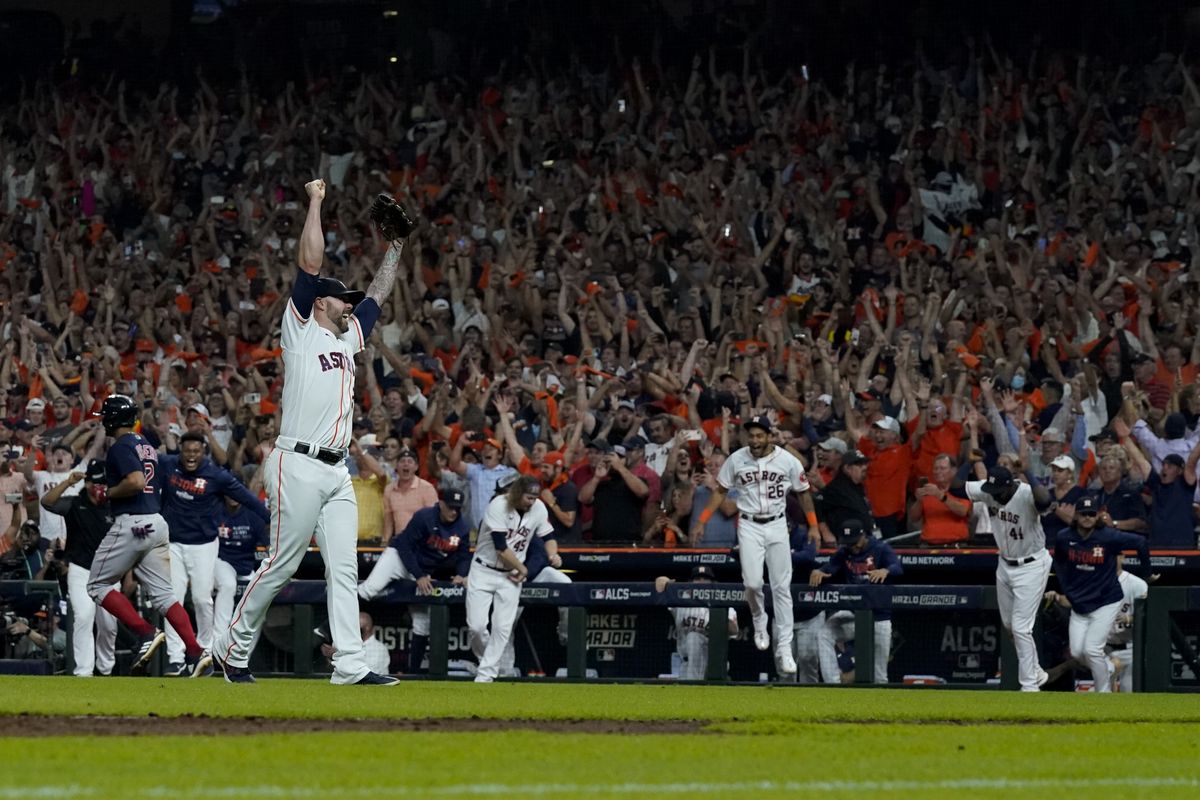 Mariners: Shed Long Jr. is going to be cut loose once the World Series is over. … One World Series participant is set. It is the Astros, who only needed one home game to eliminate Boston. … The other participant? The Dodgers hope to repeat the result from last year and rally past the Braves.

Kraken: NHL hockey makes it debut in Seattle tonight. It is about time.

Sounders: Kelyn Rowe has emerged for his hometown team.

• We’ll be back here with our TV Take this evening. The WSU game is on FS1, which allows us to examine a different way of broadcasting a Cougar game. The Fox way. Which means it will be quite a while after 12:30 when the game will actually kick off. Until later …