A GRIP ON SPORTS • Fans of the Inland Northwest’s college football teams probably weren’t too happy with Saturday’s results. Outside of Whitworth, of course. But all probably had to agree the games were entertaining. 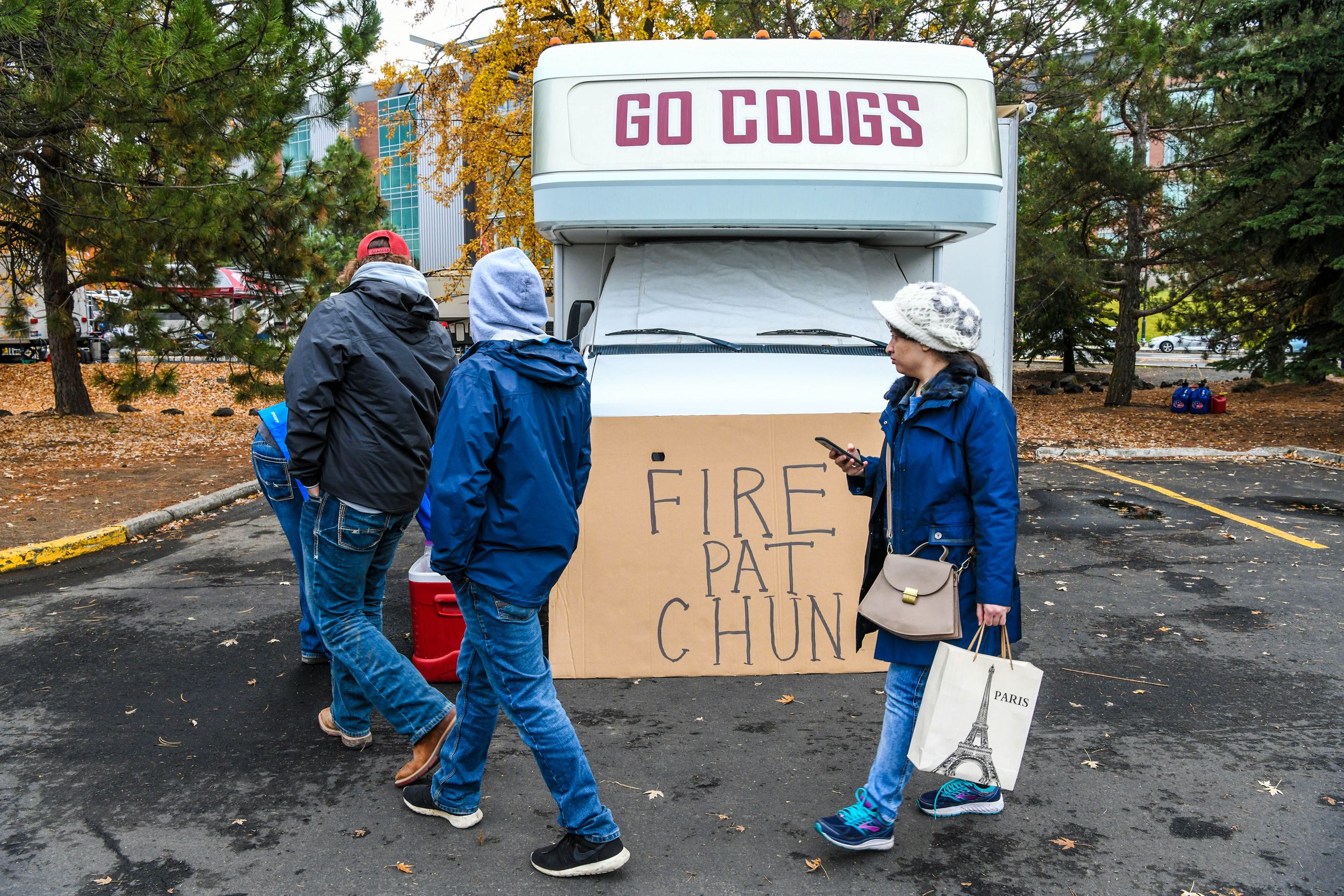 • You might have been ticked off the Cougars couldn’t tackle BYU’s Tyler Allgeier with any consistency. Or that two special team mistakes led to the margin of defeat. Or that Nick Rolovich wasn’t on the sidelines, if that is your point of view. But Washington State’s 21-19 loss to BYU was the type of mid-October college football game most of us are here for. Taut. Hard-fought. Physical. Fun.

Or you might have been upset with a late missed extra point that cost Eastern Washington a chance at overtime in a 35-34 loss at home to Weber State. Of course, the Wildcats’ multiple long scoring drives earlier might have earned your ire as well. But any game that includes more than 900 yards of offense has to be exciting.

Then again, a lot of offense and an opportunistic defense sparked the Pirates to a 66-7 home win against Willamette in a game that lacked drama of any kind. Drama, though, isn’t nearly as satisfying as winning.

There was little to be satisfied about in Moscow, outside of the Vandals’ first drive. After that Montana scored 35 consecutive points and took the Little Brown Stein back to Missoula.

When the dust had settled – earlier than usual we might add as there were few late-night games even in the Pac-12 – the day wasn’t filled with a lot of positive results. Things to cheer about? Certainly. But final scores to celebrate? Not often enough. • Baseball season is over. At least as far as I’m concerned. Oh, sure, I’ll probably tune in to watch some of the World Series. But neither team is worthy of rooting for. At least not in this house.

The Astros are not hard to explain. Everyone outside of Texas – and many inside – understands that animosity. They won a title – against the team of my youth, the Dodgers, no less – with the worst cheating since the Black Sox. The players were never punished. Never played a price. Cool. So rooting for Houston to win another, actually for guys like Alex Bregman and Jose Altuve and Carlos Correa to win another one, doesn’t seem right.

But the Braves have an even deeper history with the Dodgers, one that dates back to the early 1980s, when TBS was all the rage and both franchises were really good.

Heck, in 1982, when Kim and I were traversing the Northwest, looking for places to relocate, we had to find cheap hotels that carried the SuperStation just so we could watch the pennant-deciding games between Atlanta and Los Angeles. The defending World Series champion Dodgers finished a game back in the N.L. West that season, though, as I remember it, during our scouting trip L.A. won some exciting games.

History sort-of repeated itself this week as the Dodgers finished a couple games short of returning to the Series, done in by a roster that was missing a few pieces. It’s too bad they don’t spend more money to ensure better depth. And, yes, that was joke.

But not being able to root for either team in the Series? That’s not a joke.

As much as I would like Dusty Baker to win one – he did invent the high five and was a member of the Dodgers when I was in high school – there is no way I can forgive Houston its transgressions. So we’ll hold our nose, forget Jerry Royster and Dale Murphy and hope the Braves take home a title.

It’s the best we can do. 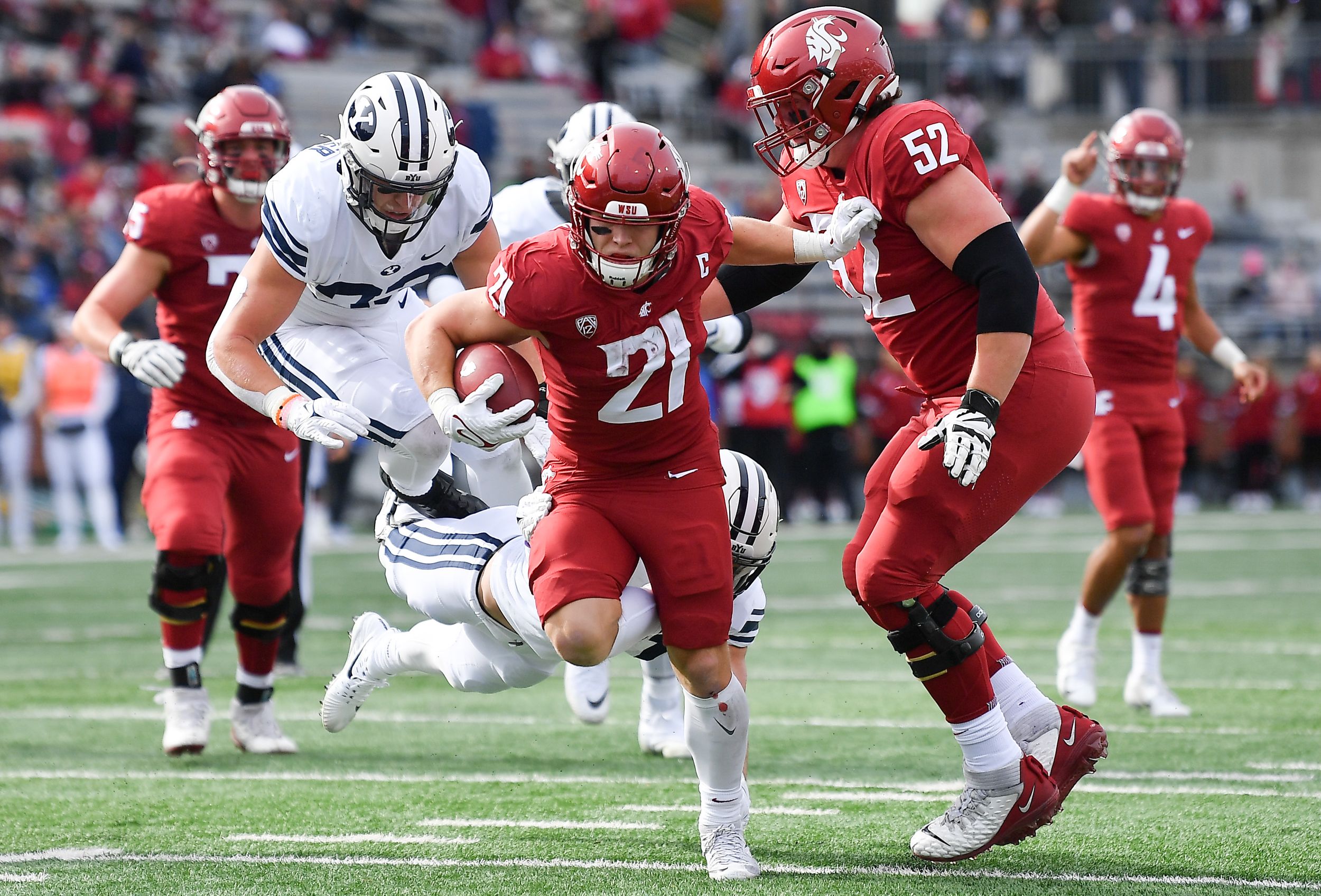 WSU: Anyone else wonder why the Cougars of Pullman called a reverse, wide-receiver pass when needing two points to tie the game with the Cougars of Provo? Yeah, me too. John Blanchette brought it up, along with a lot more, in his column. … Colton Clark covered the nuts and bolts of the game but also added the difference makers. It might have been OK to just have a difference maker, Allgeier, and call it good. … Colton explained why Deon McIntosh did not play, something those of us watching on TV didn’t get. … Theo Lawson delved into Jake Dickert’s first game as a head coach, interim or not. … The guys in the office put together the recap with highlights. … We had our TV Take. … Tyler Tjomsland has this photo gallery from the action on the field. … Off the field, Dan Pelle has a photo gallery from the tailgate area. That’s where Garrett Cabeza talked with fans about the week’s changes. … BYU wasn’t happy with the lack of physicality the past couple weeks. So the Cougars tried to bring it Saturday. … Heck, even The Athletic was interested in the game. And others as well. … Elsewhere in the Pac-12 and college football, Jon Wilner has his Saturday night summary in the Mercury News. … Oregon went into the Rose Bowl, battled UCLA and former coach Chip Kelly for 60 minutes and pulled out a victory with a last-minute interception. The Ducks and the Bruins put up some gaudy numbers, including on the defensive side. … Oregon State stayed tied atop the North with its rivals. The Beavers dominated Utah in the second half on both sides of the line of scrimmage. Let’s see. WSU handled OSU easily. Utah handled WSU easily. OSU handles Utah easily. Football. … Our thoughts about a USC upset of Notre Dame fell apart, submarined by clock management issues and the Trojans’ stupid penalties. Even changes on the defensive side couldn’t help them…. Colorado had a Pac-12 win. But California didn’t, until it hosted the Buffs yesterday in Berkeley. The Bears dominated the first half and won 26-3. … Washington won Friday night at winless Arizona but the Huskies didn’t get right. … In basketball news, UCLA knows last year was last year. … Arizona continues a tradition of holding a “secret” preseason scrimmage with Saint Mary’s. … Colorado is still trying to determine its rotation. 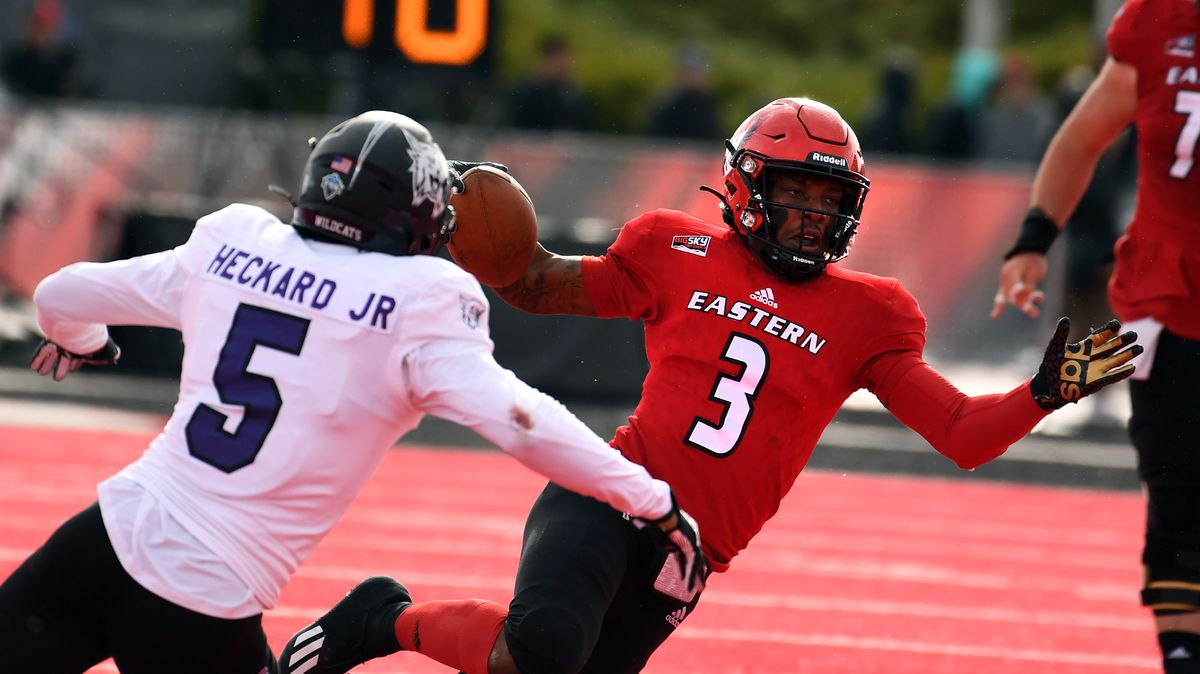 EWU: There is no secret in Cheney. Eastern plays as well as its defense. If that side of the ball can limit drives and force a couple turnovers, the second-ranked Eagles romp. It didn’t happen yesterday. Dan Thompson explains how the upset occurred. … Justin Reed teamed with Dan on a notebook. … Colin Mulvany has this photo gallery. … Elsewhere in the Big Sky, Sacramento State shut out Northern Arizona 44-0 and now holds the inside track to a conference title. Though the Hornets trail MSU by a half-game, they don’t have a tough game until the finale with UC Davis. And that’s at home. … Montana State actually leads after its 27-9 win over Idaho State, but the Bobcats didn’t look good doing it. And they face Eastern this week. … Northern Colorado picked up its third win this season, this one 17-9 at Southern Utah. … UC Davis didn’t play well but still topped Cal Poly 24-13 in a rivalry game. 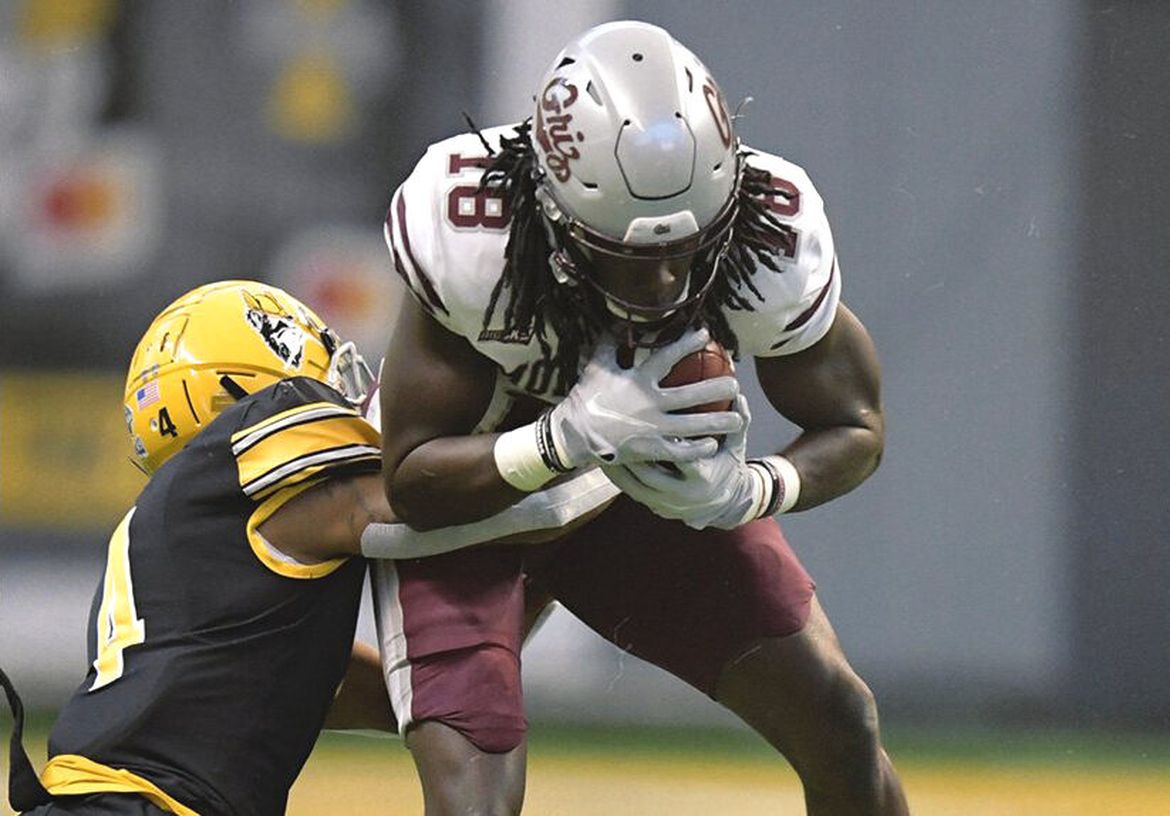 Idaho: As we mentioned above, the Vandals took an early lead. Then Montana dominated. Peter Harriman was in the Kibbie Dome and has this game story.

Whitworth: The Pirates were efficient offensively throughout. Dave Nichols is too in this game story.

Preps: Dave also took care of this roundup of Saturday’s high school action. … He add his usual Friday Night (High)Lights column, which gives us a look at what happened and what’s ahead in the local football universe.

Chiefs: An early lead led to a rout, as Spokane took a 7-3 decision against host Tri-City last night. 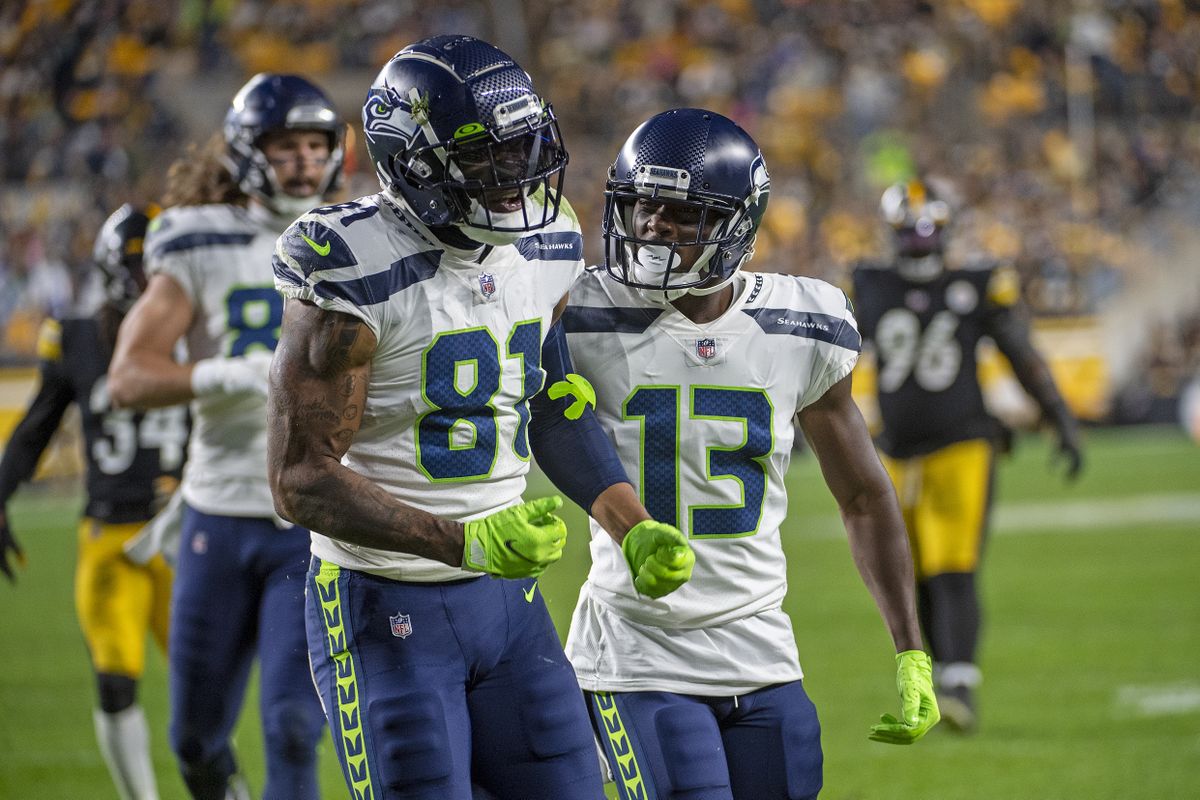 Seahawks: No game today. We all have to wait for Monday night to watch Seattle host New Orleans. And yes, Alex Collins seems OK. … Matt Hasselbeck will be there. He is going into the Ring of Honor.

Mariners: Yes, the World Series is set after Atlanta topped the Dodgers 4-2 last night. The Braves vs. the Astros. Call it the Dusty Baker Series.

Sounders: If a goalkeeper can body slam a player from another team to the ground and not even get a red card, the MLS has lost all officiating credibility. Heck, even The Rock thought Tim Melia’s violent action in Salt Lake City’s 2-1 win over Seattle deserved that penalty. 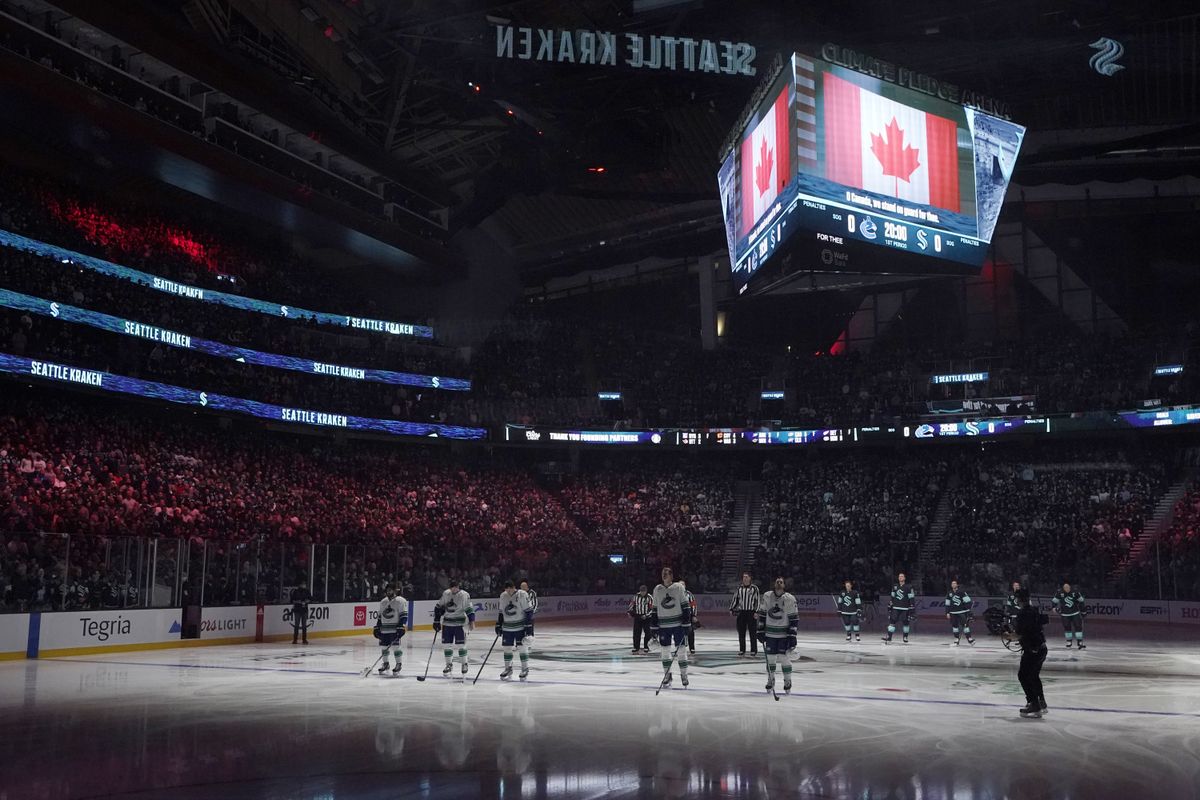 Kraken: It was a night to celebrate the NHL coming to Seattle and the opening of the Kraken’s new arena. But Vancouver refused to cooperate, rallying with three third-period goals for a 4-2 victory.

• The early game in Pullman allowed a rare Saturday night out. An early evening dinner on a restaurant’s deck overlooking the Spokane River. Sunset was gorgeous. So was the pizza. Ummm, pizza. Until later …