A GRIP ON SPORTS • Position coaches don’t get the glory their head coaches do, but they are key elements in any college football team’s success. Which is just another reason Saturday’s Washington State game at Arizona State is so interesting.

• The usual elements apply, of course. The Cougars and Sun Devils are fighting for division titles, as well as bowl berths. But there is another added element. Both teams have assistants holding down spots they weren’t when practice began – though for different reasons.

The Cougars’ troubles have been well documented in the past few weeks. About 10 days ago head coach Nick Rolovich was fired for not following the state’s vaccine mandate. At the same time, four of his hand-picked assistant also were shown the door.

Washington State put together a makeshift coaching group last week, though two assistants moved up from other ranks to fill roles. With the addition of Dan Morrison (quarterbacks) and Dennis McKnight (offensive line), interim head coach Jake Dickert has filled out his staff for the rest of the season. The Sun Devils’ story is a bit different. And has been going on since early August.

Herm Edwards’ program has been under NCAA investigation since the summer. The charges center on possible violations concerning student visits during COVID-19 restrictions.

A former staffer sent the school and the NCAA quite a few documents that seem to indicate this is a slam-dunk case, and the school moved quickly to suspend three assistants – wide receivers coach Prentice Gill, defensive backs coach Chris Hawkins and tight ends coach Adam Breneman – before the season began. Though not dismissed – the investigation has to play out, after all – they can’t work their usual jobs. Three behind-the-scenes coaches – Juston Wood, Donnie Henderson and Trey Anderson – were elevated into those spots.

It hasn’t seemed to derail the Sun Devils that much. They are 5-2 overall and 3-1 in conference play. Washington State is 0-1 since the changes, though that loss was a tight one, 21-19 last Saturday at home against BYU. ASU lost to the other Cougars earlier this season as well, 27-17 in Provo. The teams have one other common opponent, Utah. Both lost, with ASU falling 35-21 and WSU 24-13. Both games were in Salt Lake City.

• College basketball season is almost upon us and we couldn’t be happier. The chances of success for the five area four-year schools are about as good as they’ve ever been.

Gonzaga is at unprecedented heights, having been voted No. 1 in the coaches’ poll yesterday for the first time ever. Washington State is going to battle for an NCAA berth in the tougher-than-usual Pac-12. Whitworth will win 20 games and move on into the postseason as per usual. Eastern Washington, while under new management, has reformed its roster under David Riley and should still be fun to watch. And Idaho? There is optimism in Moscow despite the past couple down years.

We’re darn lucky in this area. It doesn’t matter what school you root for (or which gender you prefer, as Gonzaga and Idaho are exceptional year-in and year-out in women’s hoop). The college basketball is always good. 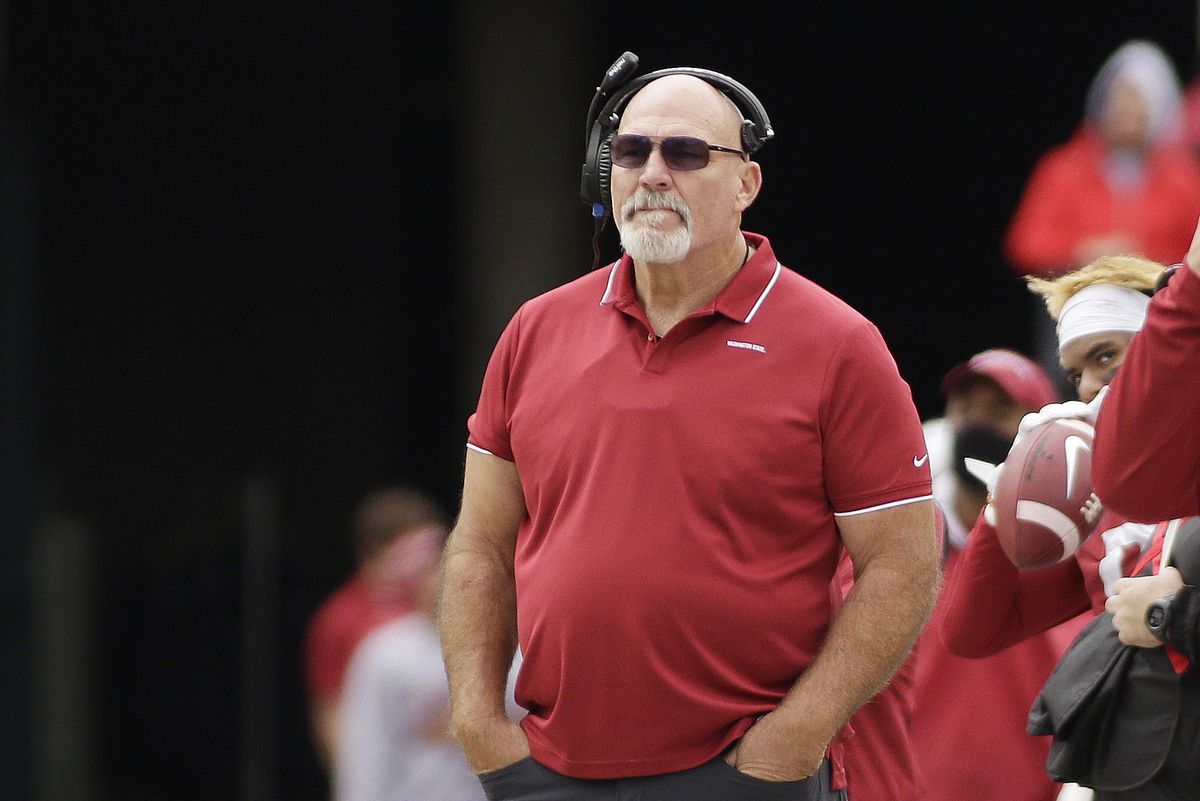 WSU: As we mentioned above, the Cougars have a couple new faces among their football assistants. Colton Clark takes the time today to introduce the pair. … Washington State is all over Sports Illustrated’s college basketball preview, with Kyle Smith among a list of rising coaches and the Cougars picked fifth in its Pac-12 preseason ranking. … Wilner expects the Cougars to lose big this weekend. Here are his picks from the Mercury News. … Arizona State got a big boost by Utah losing in Corvallis last weekend. The Sun Devils were on a bye week. … Elsewhere in the Pac-12 and college football, we linked Jon Wilner’s power rankings yesterday but here they are in the S-R. … The transition from Chris Petersen to Jimmy Lake hasn’t been as seamless as Washington would like. Maybe this will help. … Oregon State’s unexpected rise may just be the top story in the conference this season. Part of the success comes from the secondary. … Oregon has received a big break this week as Colorado will be without its best defender Nate Landman. … The Buffs are getting used to a new assistant as well. … Utah is struggling in the red zone. … UCLA may have to use its backup quarterback against the Utes. … USC better win this week. Arizona is struggling in every phase. … The Trojans’ punter just got married. …. In basketball news, every college coach loves to have that one guy who loves defense. Oregon State has him. … Colorado played an exhibition game last night. It won. 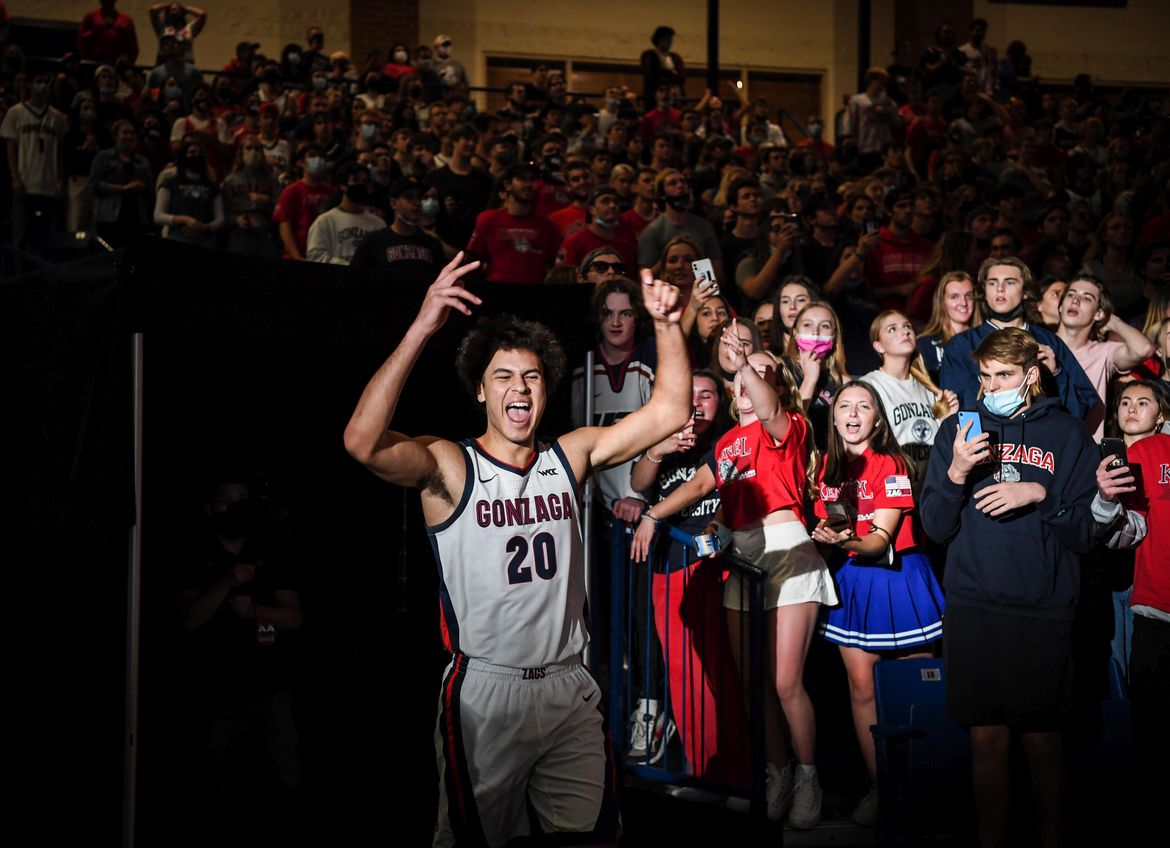 Gonzaga: As we mentioned above, and Theo Lawson covers in this story, the Zags are No. 1 in the preseason coaches’ poll for the first time. Check off another box for the program. … The school’s cross country teams head for the WCC championship this weekend. Keenan Gray has a preview of the event. … We missed this yesterday, but Larry Weir and Tom Hudson chatted for a recent Press Box podcast.

EWU and Idaho: Dan Thompson has his Big Sky notebook this morning, looking at the remaining schedules for all the conference teams. … Around the Big Sky, a Montana player is ready to pass his uncle in the school’s record book. … Montana State’s kicker might be the best freshman in the nation. … Northern Colorado is trying to pay it forward with its young fans. … Does Weber State have its swagger back? 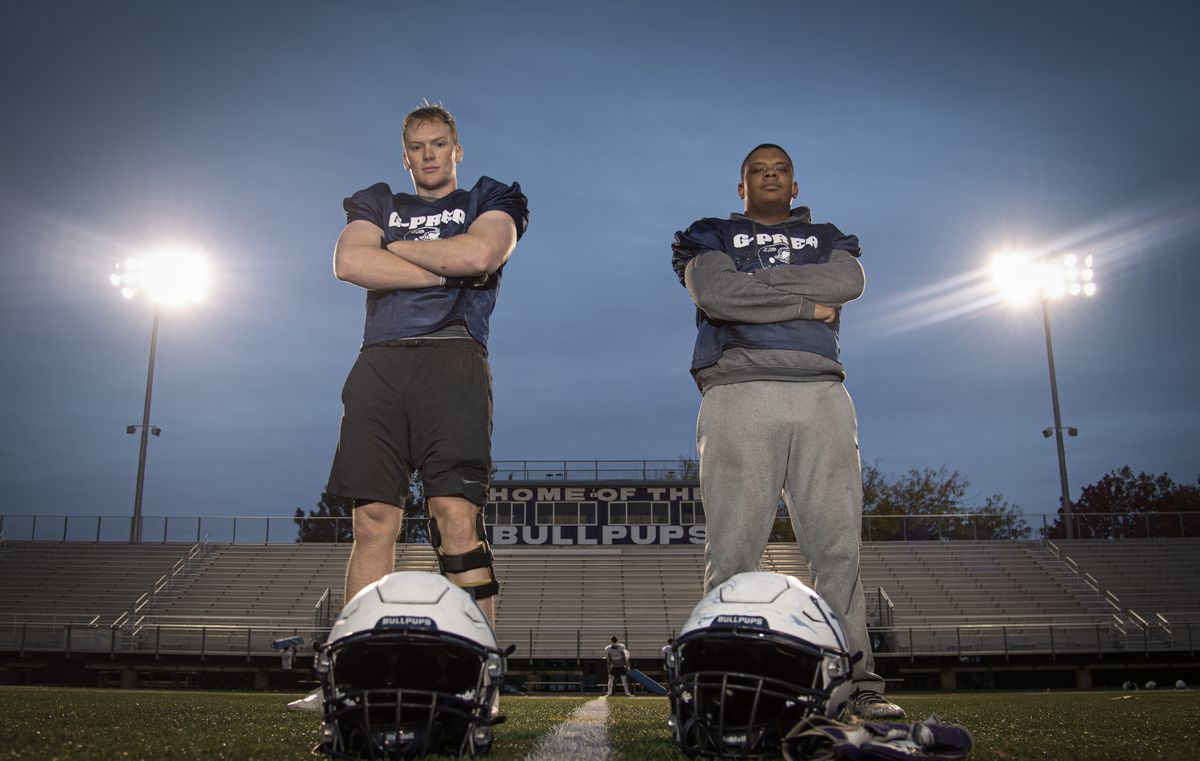 Preps: With three classifications and three levels of play, the Greater Spokane League doesn’t recognize one overall football champion. But there is a de-facto title game Friday pitting Gonzaga Prep and Mt. Spokane. Dave Nichols has this in-depth preview. … Dave also has a roundup of Wednesday’s action. … Ridgeline’s cross country program is having some success. Keenan introduces us to one of the main reasons why, sophomore Ruby Bryntesen. 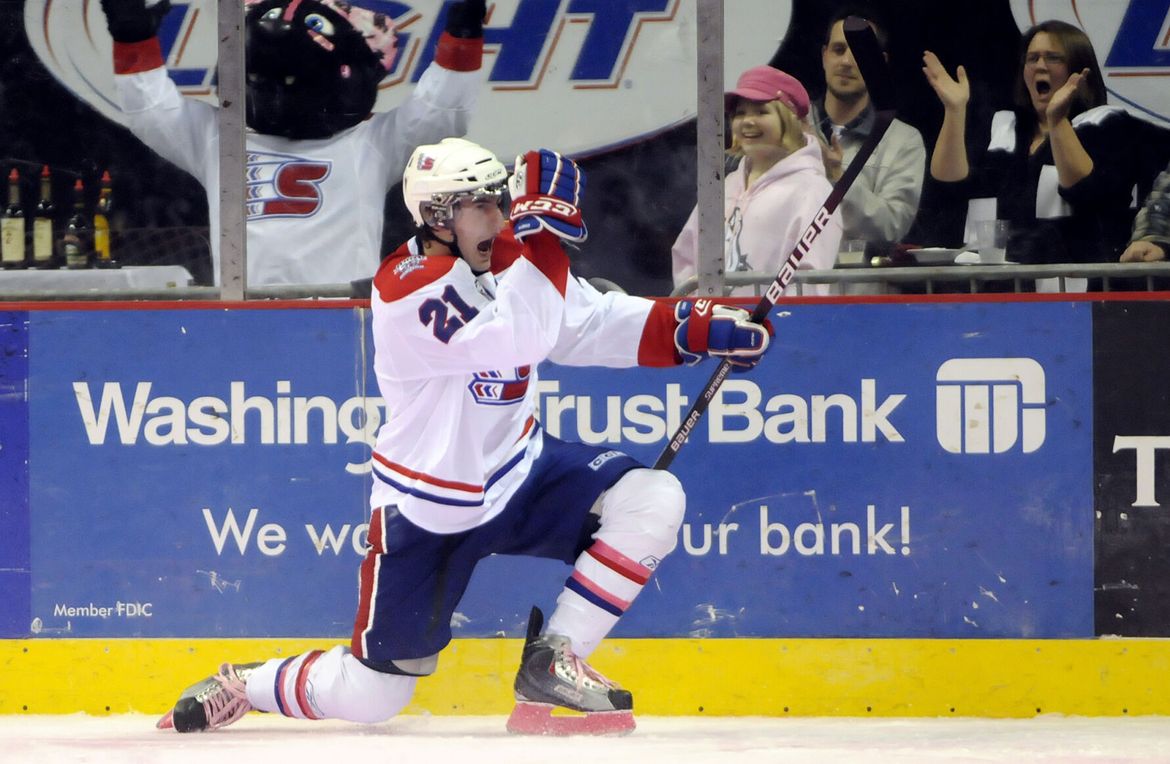 Chiefs: We haven’t covered the Chicago Blackhawk scandal as it’s not a local event. Except it turns out there is a connection. A former Spokane player, Kyle Beach, was among the victims. … Larry Weir spoke with Mike Boyle yesterday for the latest Press Box podcast.

Track and field: The Podium is almost finished. And that means track events are just around the corner at the new downtown facility. Kip Hill looks at what’s ahead as Spokane adds to the Arena-area athletic complex.

Seahawks: Jacksonville is in town, so everyone who calls themselves a 12 – and those who root for Seattle and abhor that term – is expecting a win. It should happen. But it also shouldn’t change the basic narrative. What’s ahead for Seattle, this season and beyond? … Ethan Pocic is back in the mix at center. 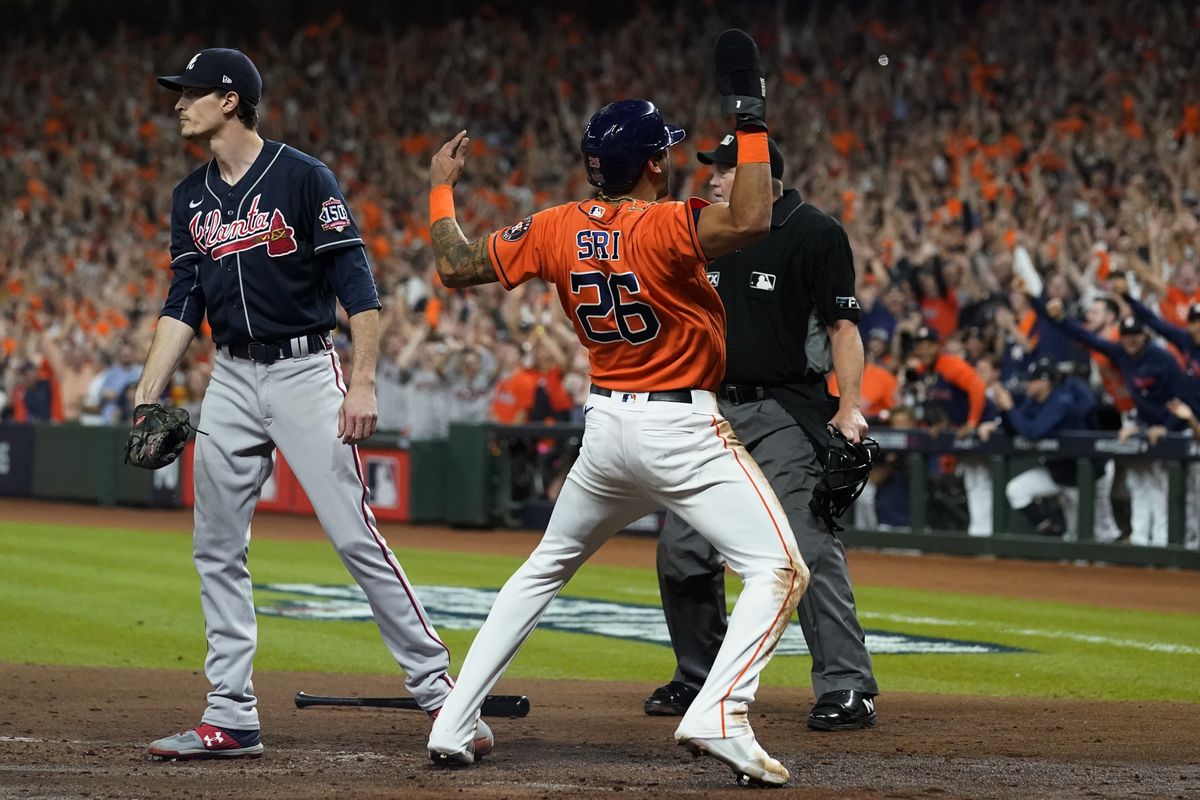 Mariners: The World Series is tied at one-game apiece after Houston’s 7-2 victory Wednesday night. Is anyone watching? … Jake Bauers is no longer part of the club.

Kraken: Seattle already has a Hall of Famer. As a scout. … The defense helped the offense mightily in the win over Montreal, which is a good thing.

Sounders: Nice of the MLS to admit its mistake. Too late for the Sounders, of course, but, you know, the match with Sporting Kansas City won’t have any bearing on the standings. Sure it will but KC will have to play one match without its goalkeeper, Tim Melia, given a retroactive red card for his body slam of Cristian Roldan. He’s lucky he wasn’t arrested.

• Somehow, Junior the Big Black Dog, was locked in the garage overnight. Now, remember, he is part Great Dane, so he could have done a lot of damage. Maybe even chew one of the car’s tires into bits. But all he did was wait patiently for more than an hour for someone to discover their mistake and let him out. He’s a big lug and I love him to death. He even puts up with the puppy biting his lips constantly. What a trooper. Until later …