Eastern Oregon absorbed a 53-point loss against Gonzaga, but the departure of two key players to injury was much tougher on the Mountaineers.

Senior guard Max McCullough, the program’s all-time leading scorer, said he likely suffered a career-ending torn ACL while making a bank shot in the first half.

“I have to get more tests but not the way I wanted to go out,” said McCullough, a Post Falls High product.

Mountaineers guard Paul Pennington, a former GU walk-on, left early in the second half with a dislocated elbow and could miss 8-12 weeks.

"We're reeling a little bit as a group," coach Chris Kemp said, "but we're going to try to recover, pull up our boot straps and keep going to work."

It was an exhibition contest so the flashy stats and easy win won’t count in Gonzaga’s record books.

But the highlight-reel plays will carry some staying power.

Top-ranked recruit Chet Holmgren’s first bucket 30 seconds into the game: rebound, dribble the length of court, step around a defender for a layup. The first of many post-to-post feeds saw Drew Timme’s lob pass to Holmgren for a dunk attempt that rattled off the rim. Holmgren was fouled and hit a pair of free throws.

Julian Strawther scoring at all three levels – draining 3-pointers, a mid-range jumper and finishing at the rim. Rasir Bolton flying down the floor for a transition bucket. Kaden Perry powering past one defender and dunking on another.

It added up to a 115-62 victory Sunday over Eastern Oregon in front of the first full house of 6,000 at a McCarthey Athletic Center game since Feb. 29, 2020, when the Zags defeated Saint Mary’s on Senior Night about two weeks before the sporting world shut down in response to the COVID-19 pandemic.

Strawther, who spent last season backing up Corey Kispert and Joel Ayayi, had team-highs with 18 points and nine rebounds. He made three of the Zags’ seven 3-pointers.

“Obviously always waiting (last season), always ready though,” the 6-foot-7 sophomore said. “Last year playing with guys like Corey and Joel, I learned a lot from them, learned as much as I could.” 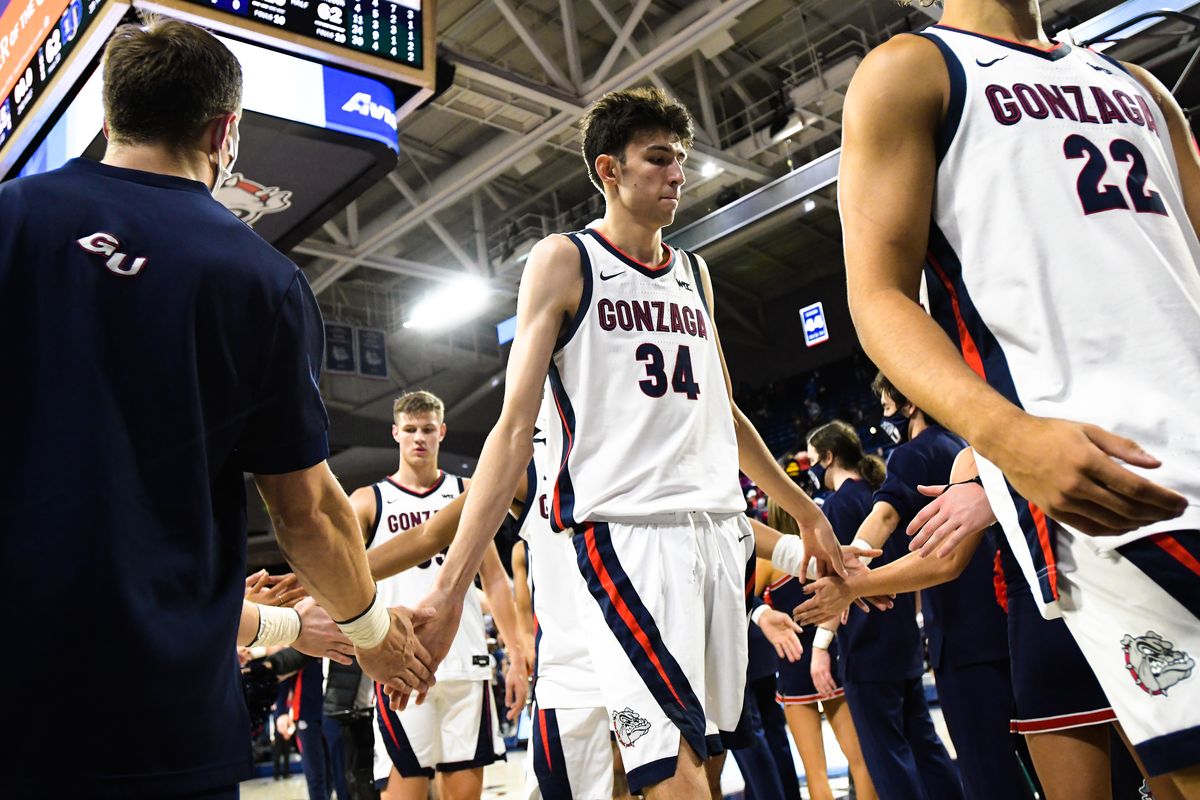 Gonzaga Bulldogs center Chet Holmgren (34) heads to the locker room after the second half of an exhibition college basketball game against Eastern Oregon on Sunday, Oct 31, 2021, at McCarthey Athletic Center, in Spokane, Wash. Gonzaga won the game 115-62. (Tyler Tjomsland/The Spokesman-Review)

The 7-foot Holmgren finished with 17 points, eight boards and two blocks. He had a block on one play and a dunk at the other end. On another he dribbled behind his back twice to earn a trip to the free-throw line.

“I just try to do what I need to do to help the team win, whether it’s pushing in transition and finding open teammates,” Holmgren said. “Whatever it might be, I try to do that.”

Fourteen played and 13 scored as Gonzaga cruised against the NAIA visitors from La Grande, Oregon. The Zags celebrated in the locker room by dousing acting head coach Brian Michaelson with water. Michaelson will guide GU in two exhibition games and the season opener while head coach Mark Few serves a suspension after pleading guilty to DUI.

Holmgren, Andrew Nembhard and Drew Timme were considered locks for the starting lineup with Bolton, a grad transfer from Iowa State, a likely pick. The fifth spot wasn’t as clear but Strawther made a strong first impression in the starting unit.

“Coach (Few) and I and obviously the whole staff, like we do any time, there’s nothing different,” Michaelson said of determining the starting five. “Obviously coach is our leader and he’s going to have a huge input in it, and the assistants based on what we’ve seen in fall camp. Coach has the biggest say.”

“We’ve got a bunch of really good guys and there’s a lot of lineup combinations you can throw out there and we’ll be completely fine,” Strawther said. “We all believe in each other’s abilities, we believe in the coaches’ decisions and we know that no matter what lineup is out there we have a group of guys that will get it done.”

The Zags showed off their versatility. Holmgren hit his only 3-point attempt. Drew Timme had a rebound, drove the length of the floor and scored for two of his 10 points. Gregg buried a 3-ball. Watson defended point guards, wings and a power forward.

The 6-5 Sallis was fast in transition but also worked inside for buckets and seven rebounds.

“There is a lot of that (positionless basketball) and that’s got to be a gift of this team,” Michaelson said. “We’ve talked about Chet’s versatility and you got to see the guards’ versatility. Rasir, Andrew and Nolan playing on and off the ball (and) obviously Hunter getting out in transition.

“Especially the way that Anton, Chet and Drew can handle that ball on the perimeter and bring it in transition is something we’ve done a lot here in the past. With three guys, once you interchange those lineups, you’re still getting that same action that has been so good for us.”