As the sun warmed the playground Thursday morning at Regal Elementary School, almost everyone felt the excitement of the first day of class.

Except Hazel Heyn. She wasn’t so sure.

Home-schooled last year as a kindergartner, Hazel looked ahead to first grade with an anxious expression that no mask could hide.

“She’s a little nervous about this,” said her mother, Kodi Heyn.

However, Hazel has a great role model: her mom. 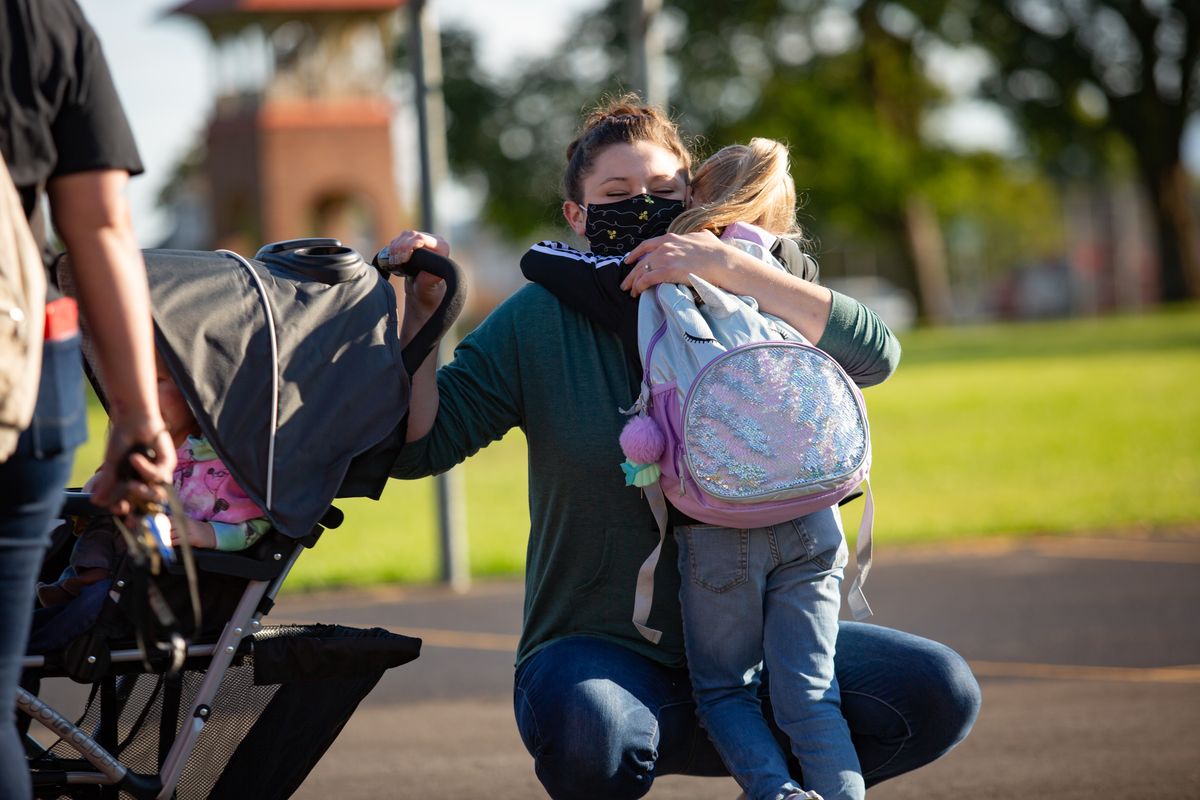 Kodi Heyn says goodbye and hugs her daughter, first-grader Hazel Heyn, on the first day of the 2021-22 school year Thursday at Regal Elementary School. Hazel was home-schooled last year, so this marks the first time that she is in a public school setting among peers. (Libby Kamrowski/ THE SPOKESMAN-REVIEW)

As the COVID-19 pandemic put Spokane Public Schools in remote learning mode last year, Kodi Heyn faced a tough problem. While her husband worked at a construction job, she resolved to teach Hazel herself.

“It was a challenge, but we did what we had to do,” said Heyn, who home-schooled Hazel while seven months pregnant and chasing a toddler.

Heyn stood next to a stroller that held 2-year-old Alice and 8-month-old Ruth, whose face was covered by a blanket. Just then, Hazel lifted up the cloth and gave Ruth a kiss.

The upbeat mood spread across the playground.

Parents Paul Dalziel and Samantha Klein have three sons at Regal. While two others were getting in line, sixth-grader Jeshua admitted to some nervousness about math.

“It was really hard last year,” Jeshua said. “But it was even harder to be away from school. It’s going to be a lot better this year.”

That goes double for Klein, who looked forward to some freedom after remote learning for most of last year.

“We were able to make it work last year, but I appreciate teachers a little more now,” Klein said.

A few feet away, lines were forming under the direction of math coach Keith Hamlin.

As he took down students’ names, Hamlin said he considered last year’s experiences a mixed blessing. However, he believes “there’s more optimism this year.”

“Now that we’ve got that one year behind us, we have great systems in place and great support from the central office,” Hamlin said.

As students prepared to enter class, Principal Tricia Kannberg felt satisfied that everything had been done to facilitate a smooth start.

Parents were “really engaged” during an open house the night before, Kannberg said.

On the issue of safety against COVID-19, “it was a matter of everybody getting comfortable, of working hard at just having conversations,” Kannberg said.

Kannberg is doing double duty this year. She’s also the principal at the Spokane Virtual Academy, an option for parents who are still uncomfortable with in-person learning.

“It’s out of an abundance of caution,” Kannberg said. “They’re nervous, but I love that our district has that opportunity.”

Surveying the students, Kannberg spotted a boy without a mask.

“We’ll have to do some reminders,” she said.