The morning of Sept. 7, 2020, lived up to the red flag warning issued by the National Weather Service. 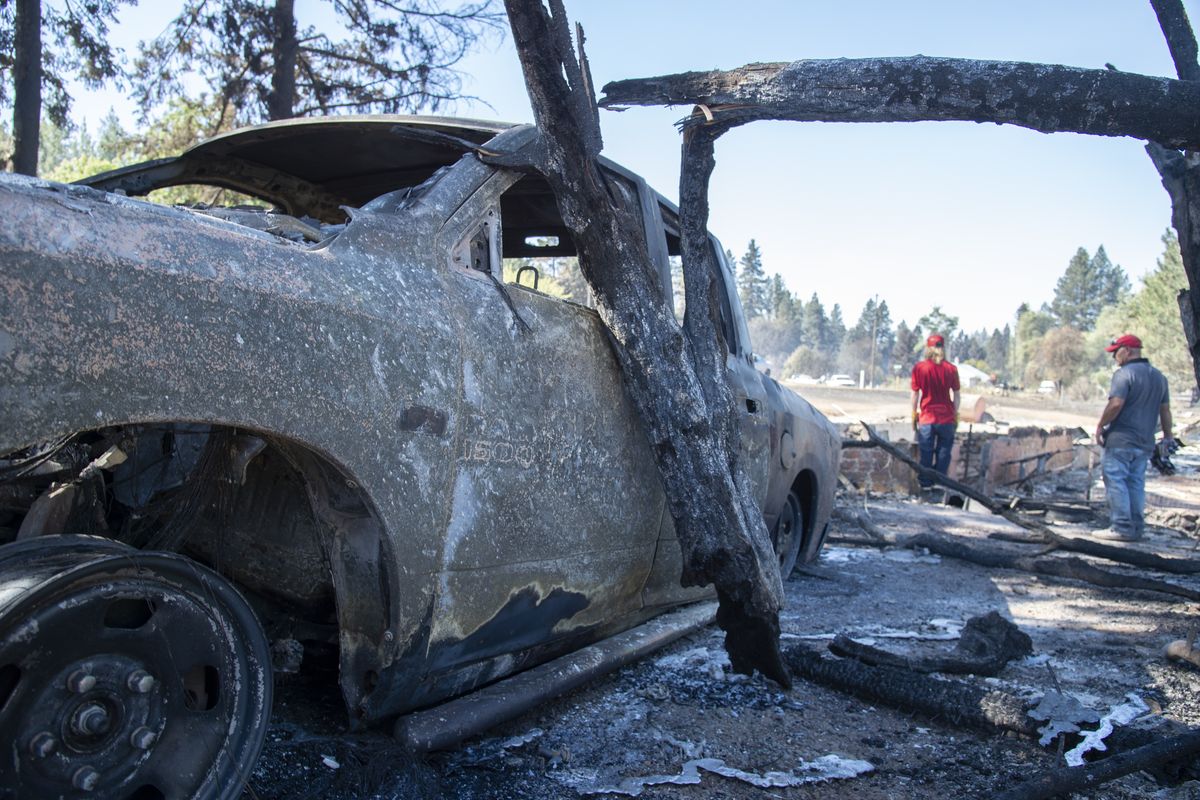 Shawn Thornton, right, and son Chris Thornton look over the rubble of their burned home and garage, including his work truck, left, Tuesday, Sept. 8, 2020 in Malden, Washington the day after a fast-moving wildfire swept through the tiny town west of Rosalia. Shawn and Shannon weren’t home at the time, but their son Cody was and managed to get their dog and a few belongings before leaving just minutes before the flames swept through, destroying their home, garage and multiple vehicles. (Jesse Tinsley/The Spokesman-Review)

At about 10 a.m., a dispatch came over the radio saying there was a brush fire in Colfax.

Tensfeld checked it out and quickly realized they would need help to keep the flames from spreading through town. He called his Washington state partners hoping to get air support, but it was too windy and all the air resources already had been grounded, he said.

The closest available state resources were in Walla Walla, so Tensfeld began working to get them mobilized. With trucks on the way into town from Pullman and Moscow, he called Spokane fire Chief Brian Schaeffer, who headed down as well.

Then the Manning Road fire was reported just north of Colfax.

“It looked like a circus on Main Street in Colfax because we were trying to get the wildland crews to go into Green Hollow and get the structural stuff coming to Colfax,” Tensfeld said. “So their fire trucks pass by one another on Main Street with lights and sirens.”

The Manning Road fire went on to burn 3,000 acres, including a historic covered bridge. The fire in Colfax took two homes and threatened others.

Just before noon, reports came in of a fire on East Babb Road.

The call came out over dispatch as a Spokane County fire. While Tensfeld was concerned, he had his hands full in Colfax. Minutes later came word the fire was headed toward the town of Malden.

“When I got word that they were going to evacuate Malden,” Tensfeld said, “that’s when I decided to head north.”

As Tensfeld left Colfax and started driving toward the small town, a plume of smoke was already visible. He called Sheriff Brett Myers, hoping to get help evacuating the town.

“As soon as I got to the top of the hill I could see the smoke and I told Brett, ‘We’re screwed,’ ” Tensfeld said.

Myers said he remembers Tensfeld asking for every deputy he had working that day to head to Malden, but with only 18 deputies in the department, many of whom were off enjoying their holiday weekend, Myers decided he should head to Malden himself.

“Within literally about a 1½-hour period you go from, we got a problem in Colfax, now we got a problem outside of Colfax, too. We don’t know what we got, but it sounds horrible in Malden,” Myers said. “So that’s when we diverted most of our resources to Malden.”

By the time deputies arrived in town, the fire was only a quarter of a mile outside of the city limits. They immediately got onto loudspeakers evacuating people.

Volunteer firefighter Scott Hokonson had already begun evacuations, but with the deputies moving in a grid and a wall of flames at their back, people were alerted quickly.

In the 30 minutes it took for Tensfeld to drive to Malden from Colfax, the fire had moved 4 to 5 miles. Tensfeld had to stop at the bridge to go into Malden from Rosalia to wait for flames to blow by.

“I watched it blow across in front of me – deer, raccoons and coyotes running everywhere,” Tensfeld said.

Across the bridge, a few fire trucks were working to save a handful of homes on the south side of the road going into Malden.

Tensfeld pushed on into town and found the deputies had evacuated most people. They couldn’t stop to fight the fire, Tensfeld said.

“When you’re trying to evacuate so many people, you can’t save one home,” he said.

By the time Myers arrived in Malden, the fire had enveloped many of the town’s century-old homes.

“Pretty much every other house, if not every house, was on fire,” Myers said. “I mean, there were very few homes that weren’t on fire, let’s just say that.”

Flames roared high on both sides of the road as Myers made his way through town, hoping the residents were long gone.

“You could just feel immense heat waves hitting the car,” he said. “It was one of those things where, as you’re seeing it, you’re like, ‘I can’t believe this is happening.’ ”

By this time Tensfeld had made his way up Wells Road, hoping to see how far the fire had come but with the wind-driven fire rushing past, he got on the road between the wheat fields. He spent 45 minutes turning cars around as they tried to get back into Malden and answering his ever-ringing cellphone, trying to coordinate the fire response.

The fire was burning the trees that lined the road to Pine City, as Myers sped toward St. John to escape the flames.

“There was literally nothing that could be done for the next little bit,” Myers said. “At some point, you don’t battle those fires, you contain them. It’s more of a, get people out. If there’s something you can save, save it. If there’s something that’s already fully engulfed, all the water in the world isn’t going to save it.”

When Tensfeld got back down Wells Road and to Pine City, the grain elevator and most of the homes in the area were on fire. With nothing to be done, Tensfeld drove back to Colfax to work with state emergency management to get more resources to the area.

Crews came in from across the state to help contain the fire. With the speed in which the fire rushed through town, Tensfeld and Myers were sure someone had been caught in the flames.

Later that night, Tensfeld picked up his wife to be a co-pilot as he drove through town to report which houses had been destroyed and take down the addresses of the homes that narrowly survived.

Fire crews worked through the night, Tensfeld didn’t go to bed until late Tuesday after more than 36 hours of work.

Immediately, the work shifted to finding temporary places for the displaced Malden and Pine City residents to stay.

“For the next couple of weeks, whether it was Bill (Tensfeld) or our office, it was a seven-day-a-week, ’round-the-clock job for weeks,” Myers said.

It took about 10 days to track down all the town’s residents. Eventually, they were able to determine that everyone made it out of town that Labor Day with their lives. The town of Malden, on the other hand, was reduced to rubble. Historic houses built in the railroad boom had collapsed into themselves as the flames ate away at the walls containing more than 100 years of history.