Lainie Woolway knows how to turn a nearly empty cupboard into a full meal.

She knows the tricks for stretching a food dollar – scouting for sales, buying bulk when she can, making bread and noodles.

“I can make a meal out of nothing,” she said. 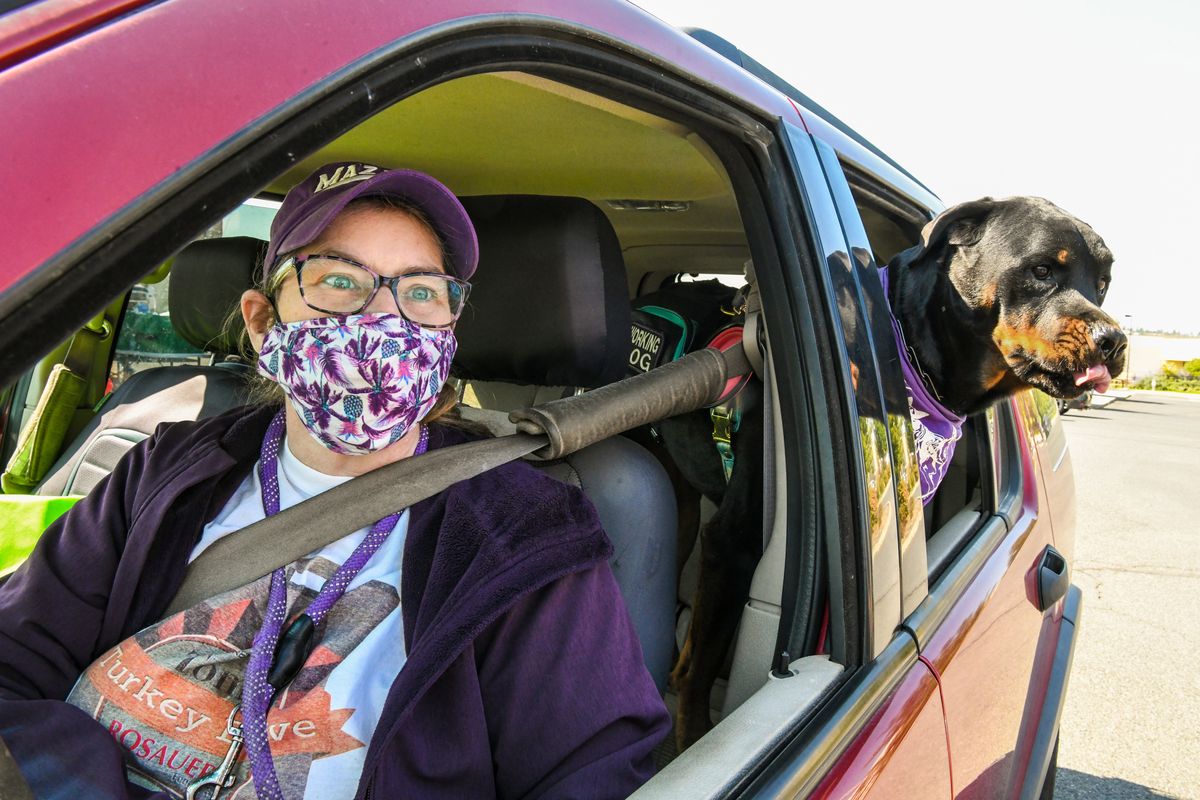 Woolway, 66, was lined up in her car Wednesday to pick up food at the Second Harvest Mobile Market in the parking lot of the Mann-Grandstaff VA Medical Center. Like many in Spokane, she and her family – three generations in her household, including a newborn – have had a difficult time over the past year. Her husband works, but her son is out of work now, following a year in which he was forced to miss a lot of shifts, unpaid, due to quarantines resulting from workplace exposure. Lanie doesn’t work because she is disabled.

They do not go hungry, she said. But there is anxiety about having enough, about having healthy food, about keeping everyone fed.

The number of people who share that concern – those with low food security, to use the current parlance – has spiked in Spokane County and everywhere else during the pandemic. Just before the virus arrived, food insecurity in America had reached its lowest point in 20 years, according to Feeding America, but the coronavirus changed that dramatically.

“Our highest level of food insecurity has always been in children,” said Natalie Tauzin, health program specialist for the Spokane Regional Health District. “They suffer the most.”

As the need increased, there was a surge of help offered for people who needed food. Local delivery programs sprung up. Established systems such as the Second Harvest network ramped up to deliver more food in more ways. Government assistance rose.

Now, as we’re entering a strange second chapter in the pandemic, the need has eased somewhat, though it still remains higher than pre-pandemic levels.

“We’re better off than last year, in terms of the need, but still above the norm,” said Eric Williams, community partnerships director for Second Harvest.

People who work on the issue of hunger are especially concerned about the people suffering the most, those in deep poverty who are missing meals. Even as a recovery takes place, the return to normalcy, in terms of access to enough healthy food, can be slow. People who are pushed into crises don’t just leap right back out.

Williams said it took almost a decade after the 2008 economic crisis for food security levels to return to pre-bust levels.

Tauzin represents the health district on the Spokane Food Policy Council, a coalition of groups and individuals working to foster a resilient food system for all. She said that one of her chief worries, as the pandemic continues to rage among the unvaccinated, is that there may be a need for another level of a stay-home type order to try and check the spread of the delta variant. If that happens, it has an effect on the most vulnerable people.

“If we go back to a stay home, stay healthy, or stay safe, we’re going to be right back in it,” she said. “How do you mobilize again for that?”

Food insecurity means more than simply being hungry. To be food secure means having regular access to a healthy diet. Studies focused primarily on children have found food insecurity is associated with higher incidences of poor mental and physical health, as well as a range of behavioral problems.

In a town with high levels of poverty, the level of need can be daunting. Last December, for example, Spokane Mobility Services operated a pilot program in which people could call the city information line, 311, to request next-day food delivery. The project was funded with a CARES Act grant of less than $10,000.

This came at a time when the Spokane food relief system, in response to soaring levels of need, had been humming along at a high capacity for months and after federal benefits had been expanded.

A lot had been done, in other words, by a lot of different folks, to get food to people who needed it.

Still, more than 2,000 households requested, and received, next-day food delivery in that month. Forty-four percent of the recipients who responded to a survey said they worried about having enough to eat more than 12 times a month.

This is more than a simple question of hunger. When there is barely enough to eat, the anxiety over food in a home can be ever-present.

An example offered by Tauzin: She works with a single mom who has a large family, and who receives federal food assistance. On a recent visit she noticed that the fridge was all but empty. The woman told Tauzin that she had to keep enough food for just a day or two, or her kids would eat it too quickly – she’d never make it to the end of the month otherwise.

A recent survey conducted by Washington State University and the University of Washington found, unsurprisingly, that more people needed food help in the past year than in the year before – more people used government benefits, picked up groceries at a food bank, had food delivered or otherwise needed help keeping their families fed.

Second Harvest, which works with 250 community partners to distribute food in different ways, saw its food distributions shoot up by 58% during 2020 – from the equivalent of about 28 million meals in 2019 to 44 million.

It has slacked off since then, but remains higher than normal.

‘Keeping me up at night’

Tauzin finds herself worrying about one particular problem quite a bit: Thousands of low-income people in Spokane qualify for federal food help, but don’t take advantage of it.

The federal Supplemental Nutrition Assistance Program – what we used to call food stamps – provides help for people living at or below 130% of the federal poverty line. In January, about 89,500 households in Spokane County qualified for SNAP benefits, but only 58% had signed up for them, according to state statistics.

That’s about 37,000 families who could get help but aren’t. It’s also millions of dollars that aren’t coming into the local economy – going to grocery stores and freeing up families to use their resources to cover other bills, Tauzin said.

“Those were the numbers that were keeping me up at night,” she said.

Starting in October, SNAP benefits are increasing by 25%, a change that will mean the average monthly per person benefit will go from $121 to $157, and the overall cost of the program will rise by $20 billion. It’s the largest increase in the program’s history, coming after years of attempts by past administrations and some in Congress to limit access to food aid, and it’s the first increase since 2006.

In the VA hospital parking lot last Wednesday, cars began lining up for the Mobile Market a half-hour before it opened. Second Harvest was there with enough food for 250 families.

What the volunteers distribute depends on what kind of donations are coming in. On Wednesday, people left with chickens, eggs, peanut butter, nectarines, strawberry jam and pies.

One woman who was there to get food for her family said her husband’s work as a contractor has been shut down or unpredictable over the past year and a half. She said she did not want to be identified in the newspaper because she was ashamed of needing the help,

“Unfortunately, we don’t know from month to month what we’re going to have or not have,” she said, in tears. “It’s embarrassing.”

That stress and shame is a part of food insecurity. It’s also, ironically, what keeps some people from seeking out the help they need, whether it’s food stamps or food delivery.

Toni Mitchell was in line waiting for food to spread around to the many people in her life who needed the help. Pasta would go to her sister, rice to a niece, peanut butter to the grandkids.

“I help everybody,” she said. “I make sure everybody’s fed.”