A GRIP ON SPORTS • From here until eternity – or mid-winter, whatever you call February – we’ll spend Monday mornings dissecting the NFL results from the day before. But on this holiday dedicated to America’s labor force, we don’t have to. It is our last free weekend before the hurricane hits.

• Years ago, we read a Sports Illustrated piece on George Toma, the then-somewhat-unknown groundskeeper for the Kansas City Royals and Chiefs. In it, the guy who would go on to be the turf master to the stars shared an easy-to-remember tip: Fertilize your lawn every holiday during the spring, summer and fall. 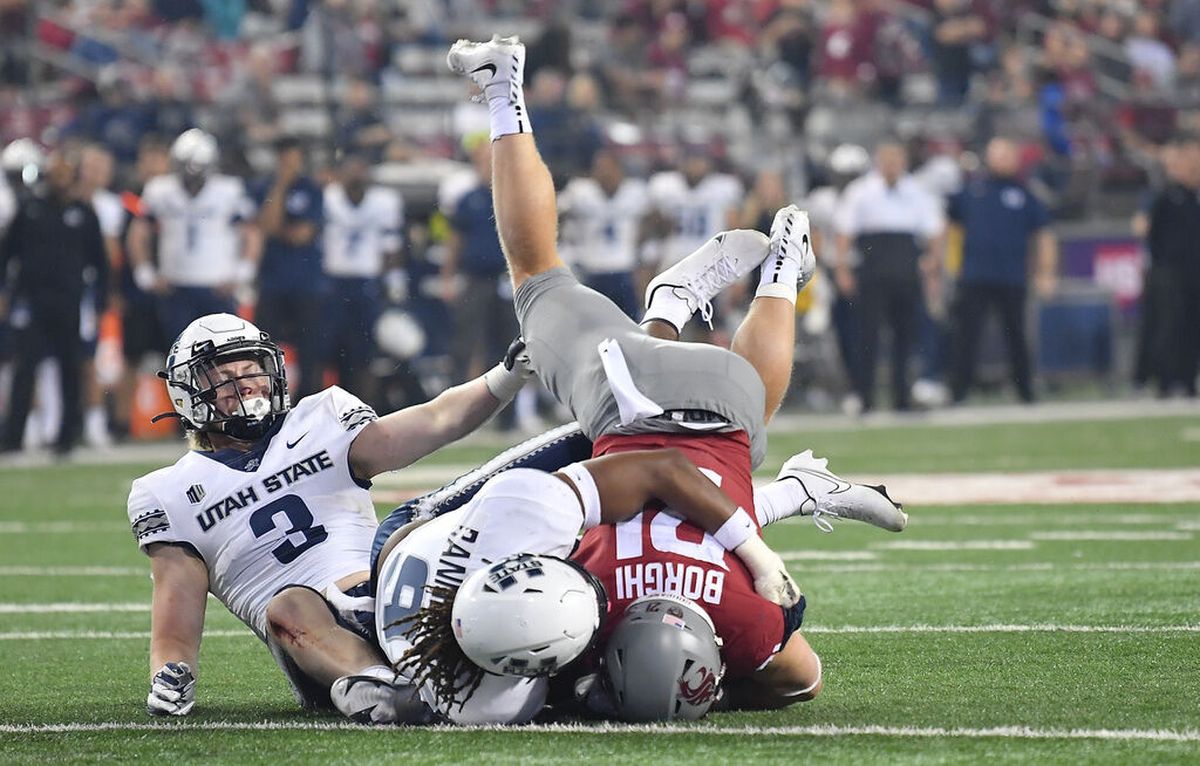 So you know what we have planned for today? Our last summer feed. Which means playing a bocce tournament is out of the question, right?

That’s about as athletic as we would want to get today, anyway. Though, a nice game of pickleball sounds appealing. Either that, or we may have to spend another day glued in front of our TV set watching golf and tennis. There isn’t anything else on until the M’s make one last attempt at winning in Houston and putting some pressure on the Astros in the American League West.

See, we don’t want to dwell on Washington State University football anymore. Or University of Washington football. We spent way too much time pounding our head against that invisible wall yesterday.

How do you explain the Huskies, with a solid offensive line, running backs and seemingly solid quarterback returning scoring seven points in a home loss to Montana? Or the Cougars lawn darting themselves in the foot over and over in a home come-from-ahead loss to Utah State?

It’s college football, maybe? That makes sense. It’s one of the reasons we love the sport. It’s played by 18-to-20-something-year-old men, a group that, traditionally, has trouble making perfect decisions for more than an hour at a time. Watch any college football game and you know the scientific conclusion our brains aren’t fully formed until our late 20s is correct.

Heck, oftentimes the folks in charge make you wonder if the right age is actually more like our late 70s.

But we digress. College football is fun, at least partly, because it is not perfect. Forget all the NIL stuff. Forget the fancy names for the offenses and defenses. Forget the money involved. Just remember one thing: The guys you expect to be perfect on Saturdays in the fall are the same ones who are oftentimes caught on video doing some of the strangest things you’ve ever seen.

If the zig when they should have zagged, so be it. It’s going to happen. They are learning. Growing. Developing. What you see happening on the field is also happening in the classroom and in the dorms. It’s college. A time for change and learning.

Remember that and life is a whole lot better.

Now, about that ill-advised decision to bring in the third-string quarterback late in the game …

• If you want another example of how our sensibilities have changed recently, you received it last night after Notre Dame’s closer than expected win at Florida State. But first, a history lesson. 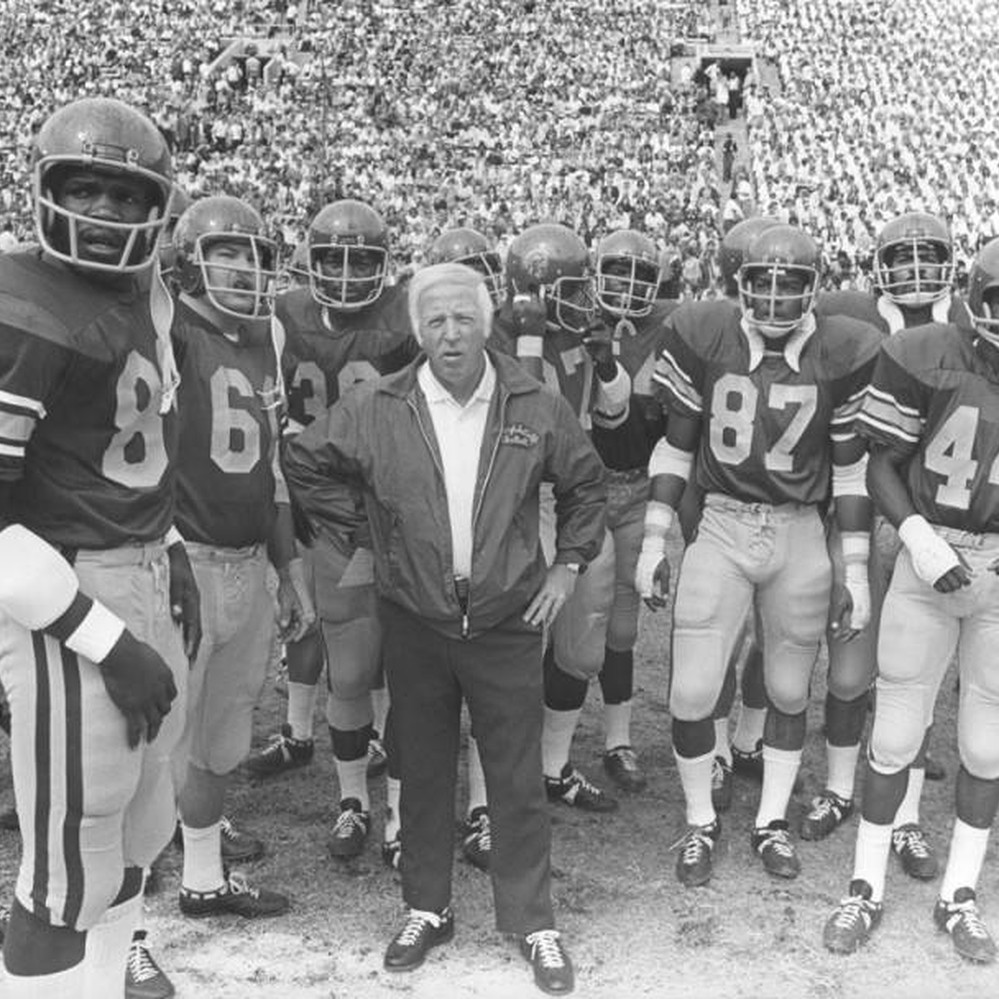 John McKay was one of the best college coaches of the 20th Century. His USC teams in the 1960s and 1970s were splendid examples of precision and athleticism – most of the time.

But he got tired of recruiting. Of not having enough money to spend on salary. (We’re kidding USC fans. Of course he always had enough money for that.) So he took the greatest football challenge ever. In 1976, he accepted a $3 million contract and became head coach of the expansion Tampa Bay Buccaneers.

They were awful. But McKay’s sense of humor, and ability to turn a phrase, never wavered. He was once asked about the offensive line’s execution during the 0-14 first season. McKay’s answer? “I’m in favor of it.”

It’s a quote that has been paraphrased over and over in the nearly 50 years since, always in a joking manner – of course. Which brings us to last night. When Notre Dame coach Brian Kelly clumsily tried to turn McKay’s quip into a way of describing how his team played.

He did it on national TV. And in front of an audience who probably thinks Lincoln was president when McKay made the joke the first time. If fell flatter than flat. It cratered. And shocked Kelly no end.

“It’s an old John McKay quote,” Kelly said when informed of the resulting social media firestorm. “I was kidding. I was being tongue-in-cheek. … It wasn’t funny? I was making a joke about it. It was taken serious. Are you people crazy?”

The answer to that last question is debatable. Anyhow, the moral of the story? Don’t try to make a joke about such things anymore.

Maybe Kelly should have paraphrased my favorite McKay quote from his time at USC. After the Trojans had lost a crucial game, maybe a Rose Bowl or a matchup with UCLA or something, he was asked what he told his team in the locker room. He said he reminded them it was nothing more than a football game. It wasn’t life or death. And that “500 million people in China don’t even know it happened” or something like that.

He used humor to put the loss in perspective. Which is something else it seems is hard to do these days as well. 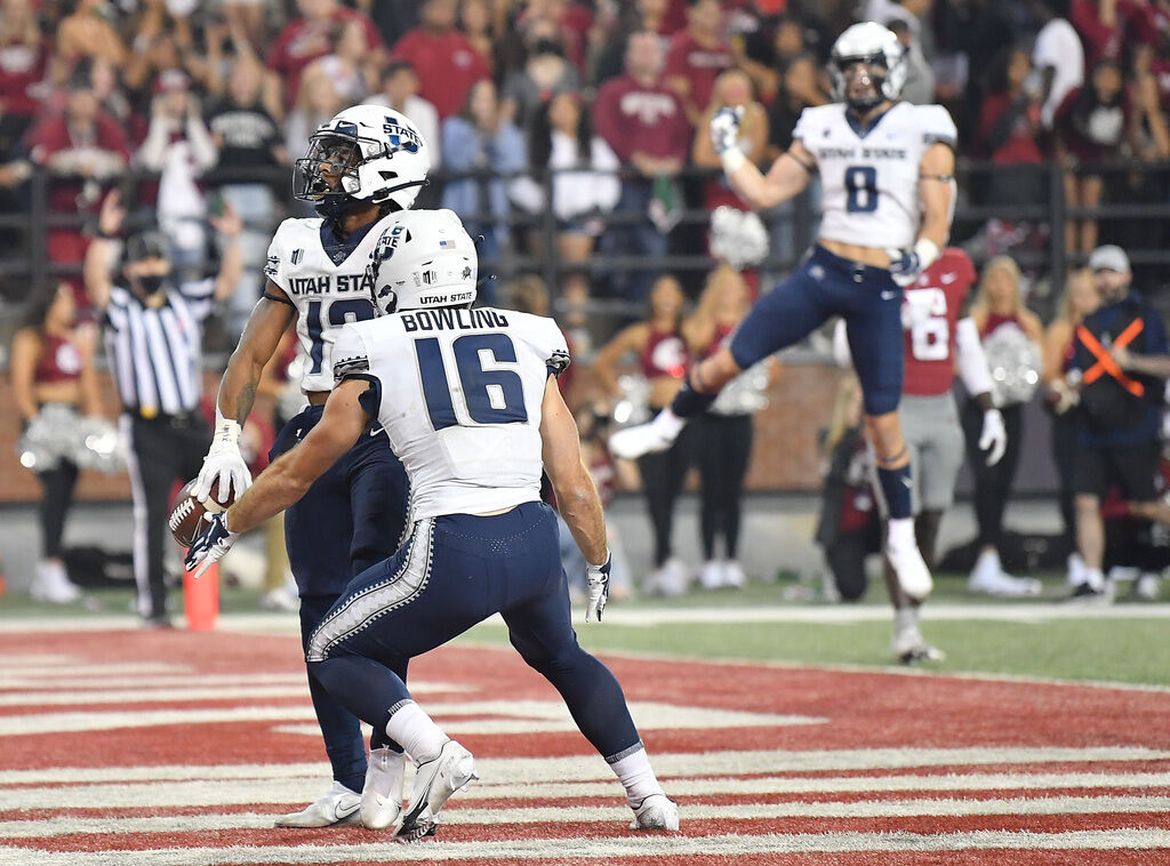 WSU: Speaking of putting a loss in perspective, Colton Clark tries to do just that this morning. He rewinds the Cougars’ last-second loss to Utah State. … Before we forget about the Aggies forever, the win gives them hope for this season. … Elsewhere in the Pac-12 and college football, Jon Wilner does the same thing this morning in the Mercury News, but for the entire conference. … Jon has proposed this before – a Pac-12 Labor Day weekend of games – but with a new commissioner in town, he trots it out once more. … Who is the conference’s best? We would still vote for Oregon but the “U” schools are coming on: USC, UCLA and Utah. … Christian Caple tries to add perspective to Washington’s 13-7 loss to Montana. Good luck. … Though Oregon won Saturday, the competition becomes noticeable tougher this week as they travel for an early game at Ohio State. … Oregon State has to learn from the Purdue loss and move on. … Colorado has a weapon returning punts. … It’s rivalry week for Utah as they face its true rival, BYU. … UCLA’s biggest offensive star is a tight end. … USC’s defense showed what it can do. Now the offense has to catch up. Next up is Stanford. … Arizona moved the ball on BYU but couldn’t score. Still, the Wildcats are favored over San Diego State.

EWU: Around the Big Sky, Portland State’s quarterback threw for 400 yards but the Vikings lost at Hawaii late Saturday night. They are in Pullman on Saturday. … Idaho State wasted chances in its loss to North Dakota. 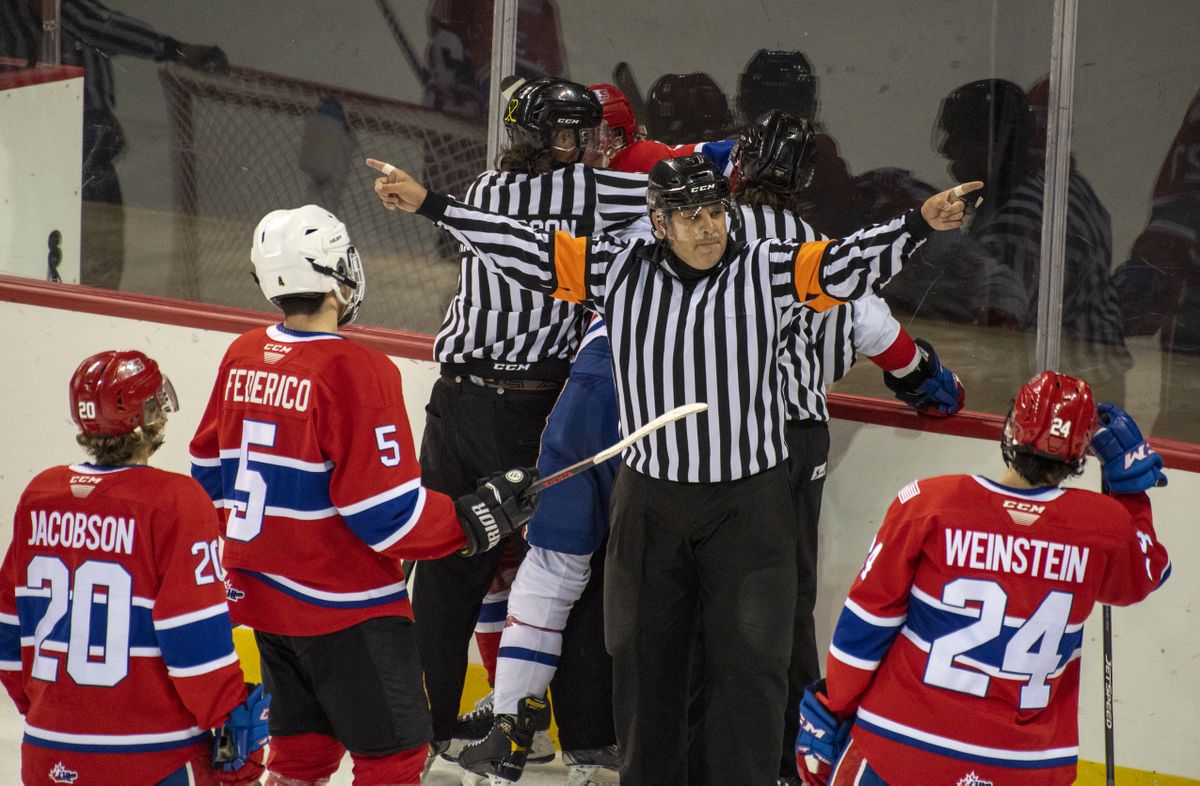 Chiefs: Usually intrasquad scrimmages aren’t all that big of a deal. But when they come at the end of training camp and at least some fans are allowed in the building for the first time in a couple years, it is. Steve Christilaw covered the Chiefs’ Red/White game Sunday, the last major event before the WHL preseason begins.

Indians: For the second consecutive day, Spokane lost a home game due to the opposition’s COVID-19 issues. Dave Nichols has this story as the Indians’ 2021 home part of the regular season ended with a whimper. With 12 games left, Spokane has a half-game lead on Eugene and a game on Everett, next week’s foe.

Shock: Arizona will play Massachusetts for the IFL title next weekend after the Rattlers’ wild win Sunday. 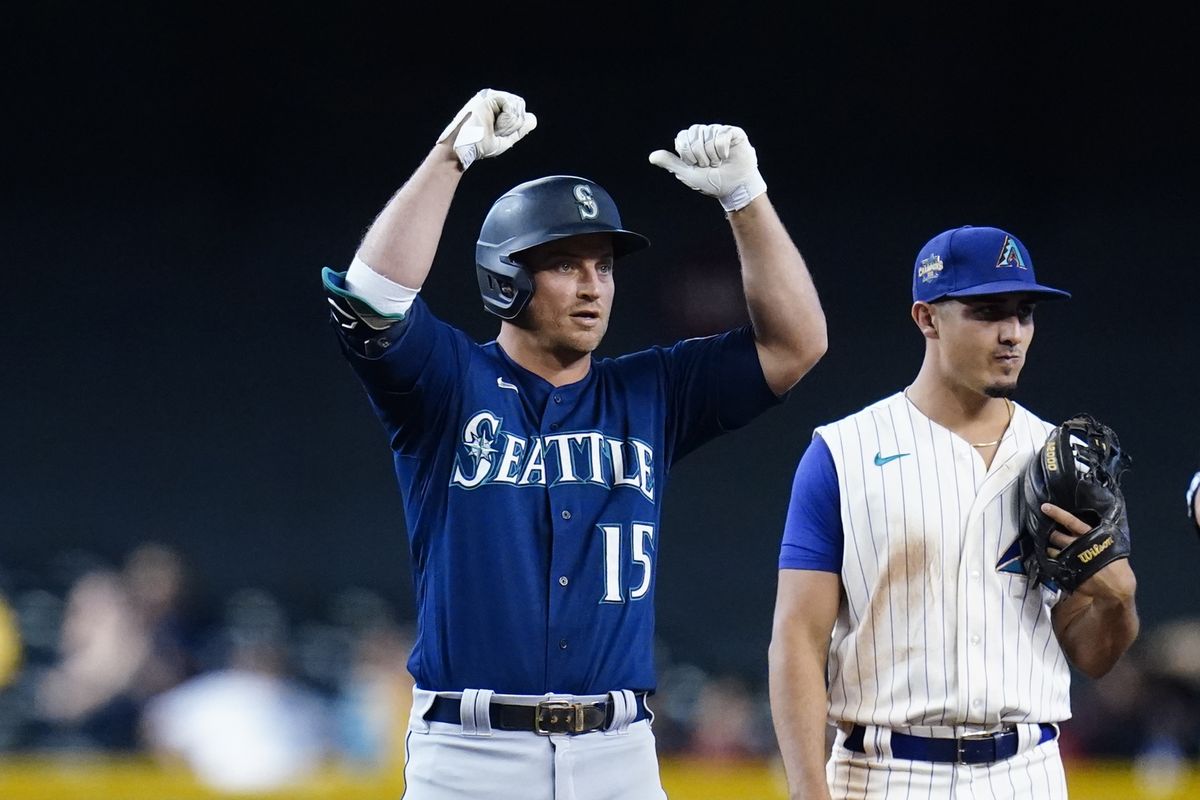 Mariners: The M’s head into Houston tonight five games back of the Astros in the loss column. But only two behind the Red Sox, their immediate goal in the wild-card race. Though Seattle may not be able to catch the Astros, a good showing this week will keep them in the running for the postseason. … The M’s did what they needed to do in Arizona, sweep the Diamondbacks. A seven-run 11th inning took care of that in a 10-4 win Sunday. … The bullpen has been key for the Mariners this season.

Seahawks: The Hawks aren’t done fiddling with the roster, especially at the corner spots.

Storm: Three Seattle players are among the top 25 all-time in the WNBA.

• It’s a perfect day to do something outside. It was cool this morning but not too cool. And the high here is supposed to reach into the low 80s. No clouds. The smoke seems to have headed elsewhere. Perfect. If my kids were of the right age, I would spend my day yelling at them to play outside. Man, I miss those days. Until later …